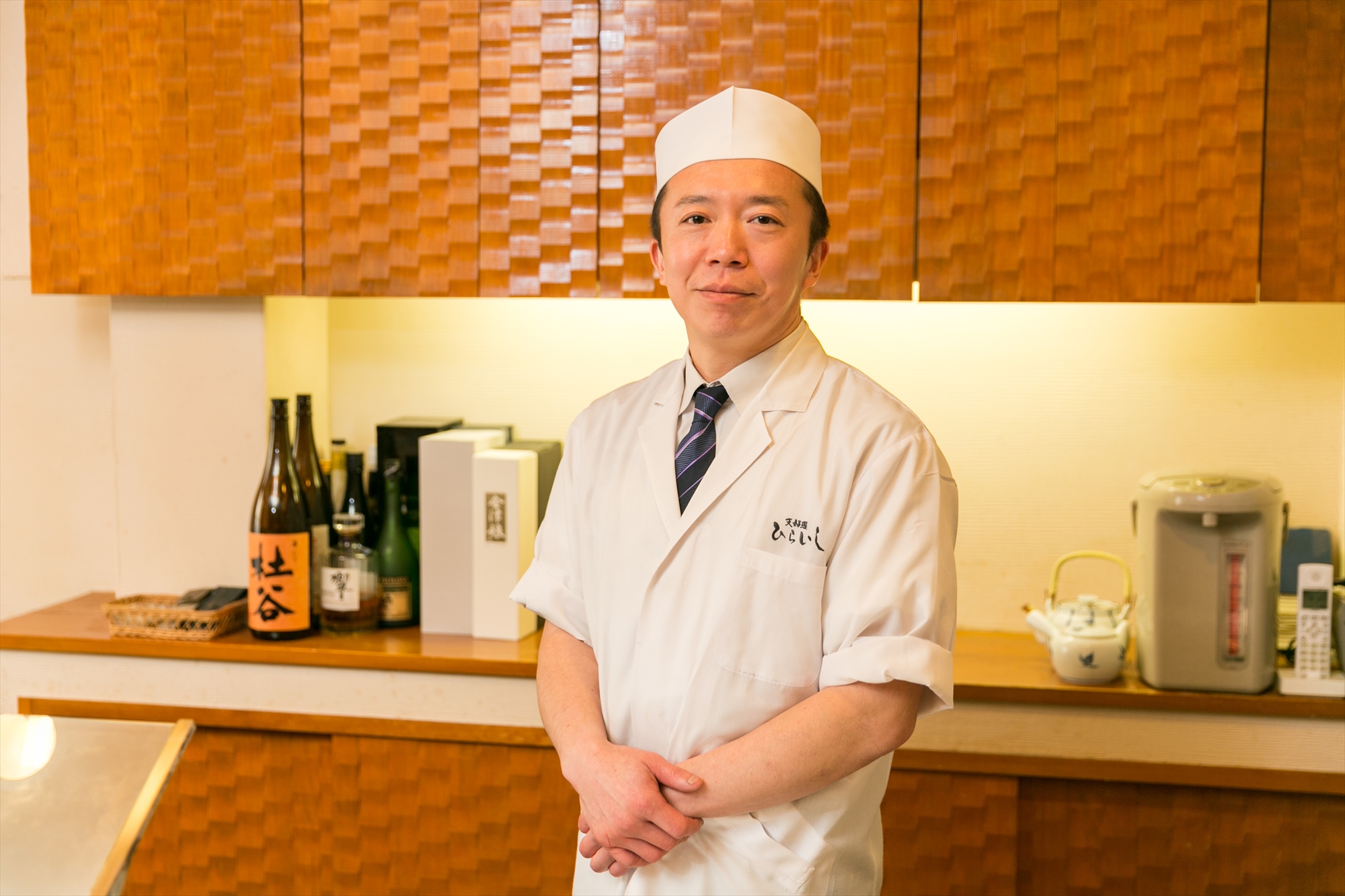 Hiraishi is a restaurant specializing in tempura. Awarded with Michelin stars seven years in a row, this restaurant is a rarity in Osaka with its counter style tables.
The store is enveloped with a dignified air; it makes full use of seasonal ingredients obtained from all around the country, such as the popular shark fin. The tempura is fried in an original oil combined by Mr. Hiraishi. The tempura also looks beautiful, impressing plenty of gourmet lovers. We had the opportunity to film the steps to make the tempura, from preparation to frying. We also talked with Mr. Hiraishi about what he’s particular about while filming his seasonal ingredients.

“Simple” Outcome of “Trial and Error” and “Ingenuity” 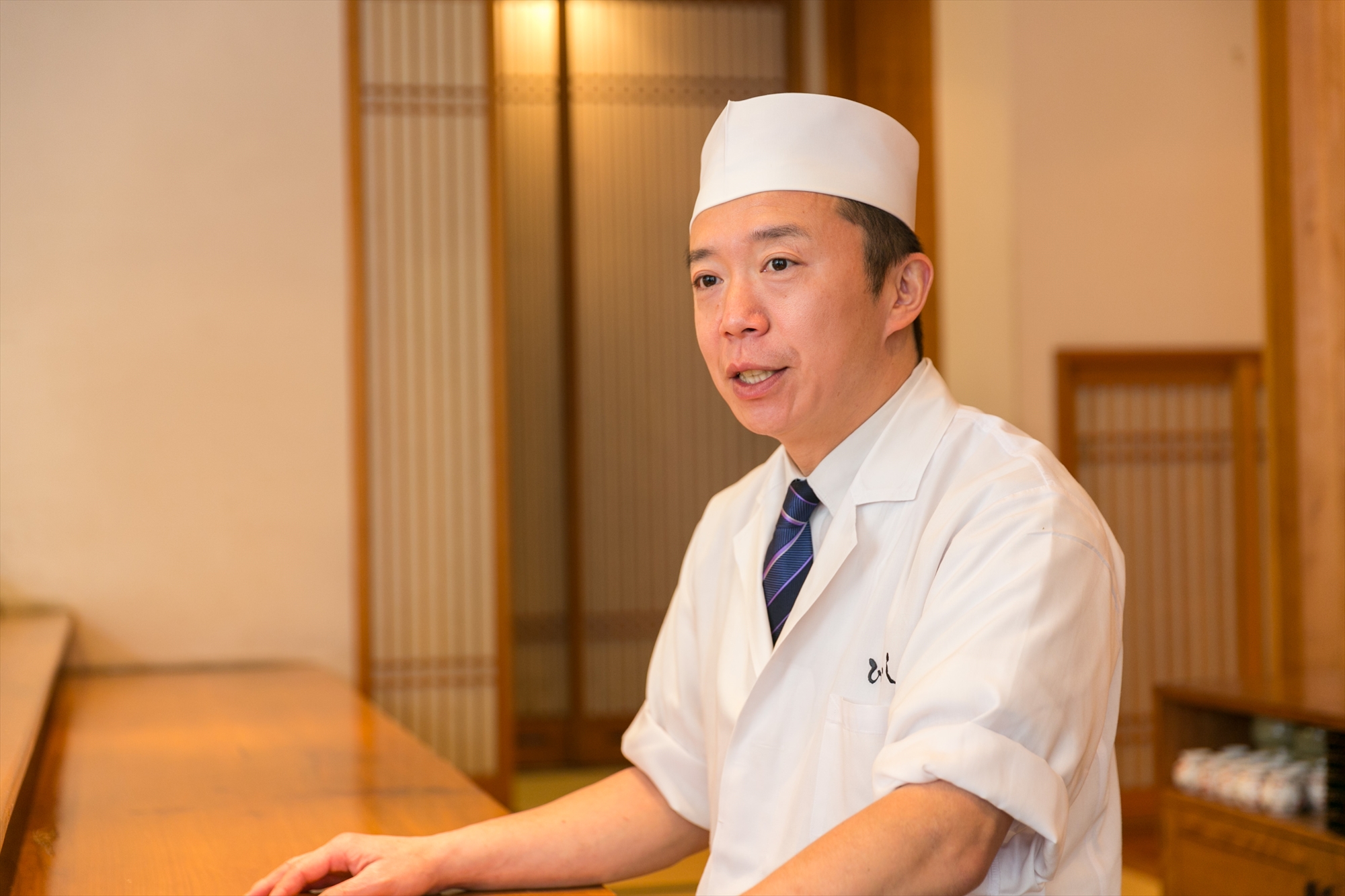 Q: How do you go about preparing the tempura?

Tempura is a dish whereby the ingredients are fried as is; while there are plenty of things to be done right before frying, there is not so much initial preparation.

First, when making ayu tempura, I use fish measuring about 10 cm. It shouldn’t be too big because the whole fish is eaten, including the head. I always use fresh ayu, and there is no need to dress it. I just put it into ice before frying it and fry it as is.
That’s why the freshness factor is so important. When buying the fish, I look at the eyes and everything to check how fresh it is.

Q. What kind of fish are most suitable for making tempura?

Sillago is an elegant white fish that makes for a standard tempura. Actually, this fish isn’t used for much else except tempura. Just like with ayu, I try to use small fish.
While small fish are not very useful for sushi and other Japanese dishes, it’s great for tempura because a whole fish can be fried and eaten easily.
I remove the scales and insides from the sillago and put it into ice water to maintain freshness. It can have a different taste if you put it into the refrigerator as well.
The size I use also changes slightly depending on the season.

First, I clean the oysters with grated daikon radish to remove the dirt.

Q: Why do you clean them with grated daikon?

There are places that clean oysters with salt, but doing that also removes the moisture from the insides. While it does take some effort, this is how I clean it with grated daikon.

This oyster can be used as is, but some oysters can be too soft, depending on where they were derived from. In that case, I would lightly put it through hot water, and then leave it on ice to make it more firm.

I makes changes to the preparation method for the same ingredient, depending on the season or where it’s from.

About the tempura batter and oil

I’ll be using the whole egg. Some places just use the yolk. If you put the white part in, it becomes difficult to make changes to the batter, and it can break apart when frying. That’s why many people are hesitant about using it. On the other hand, using the egg whites can result in a light batter. I’ll separate the flour into three parts and mix it. We try to make a thin batter here.

We have two types of oil here and they’re chosen according to the ingredient.
The dark one is a rice oil and doesn’t oxidize easily. It lasts for a day. This lightly colored one is changed three times a day.

We use really good oil here and they’re expensive. The oil accounts for a pretty high percentage of the cost.

I had this pot custom made by an artisan. Normally, aluminum pots are about 6mm thick, but I had asked this one to be made with a thickness of 8mm. The aluminum has been designed to expand as you gradually strike it. I thought about things such as how the oil would flow once the ingredients are in the pot and had it designed accordingly.

Q: Does your restaurant have wine and Japanese sake?

A: A lot of people say that wine really goes well with tempura. Fried dishes like tempura tend to go well with sour drinks.

Japanese sake doesn’t match as well as wine, but it can be safely paired with any type of tempura. It can be enjoyed alongside a tempura course.