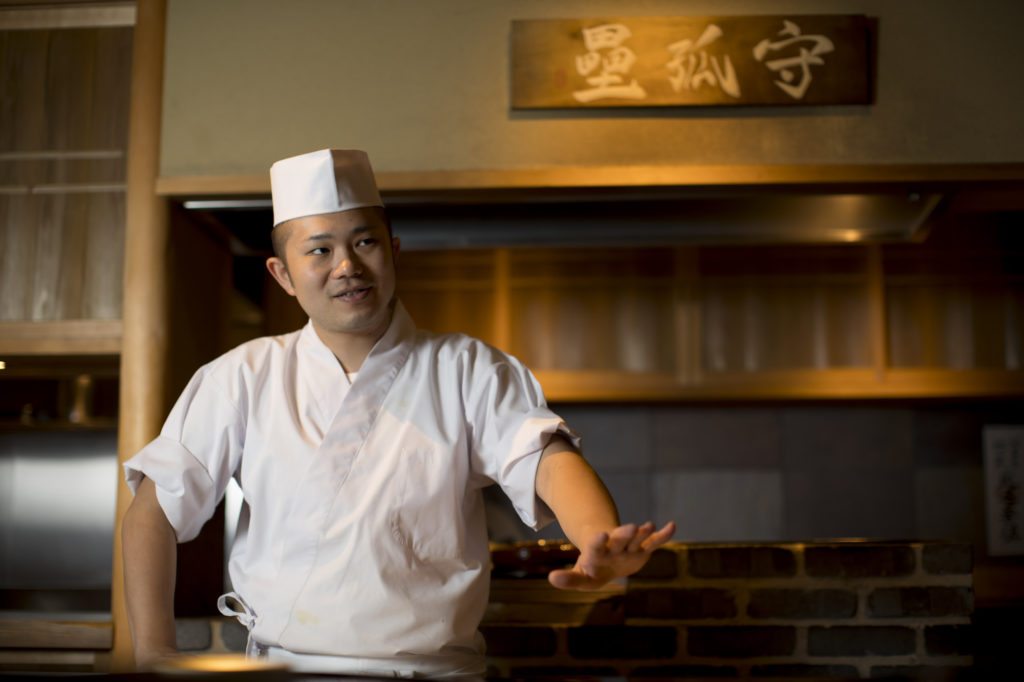 Take a 4-minute stroll from Kintetsu Nara Station through the shopping district and you’ll come
across “Nara Nikon,” which is situated in a brand new building complex with a modern sense of
design. The restaurant’s name is taken from a word used primarily in Zen Buddhism, and the
characters are read as “Nikon,” rather than the more general reading, “Jikon.” The restaurant’s
owner, Shimizu, joked with us in his personable way about the name’s similarity to the famous
Japanese camera company. He tells us that the meaning behind the term has to do with “being
in the moment and doing what you have to do.” As a purveyor of Japanese cuisine, he takes
these sentiments about cherishing each moment and uses them as a well of inspiration.
For this video Shimizu took the occasion to showcase homemade “Goma Dofu (Sesame Tofu),” as well as his
“Round Daikon Radish and Yamato Haibara Beef with Arrowroot Ankake Sauce,” which utilizes
ingredients from Nara.

Shimizu:
The Goma Dofu only needs 3 things: hulled sesame seeds, Yoshino arrowroot, and kombu dashi.
There’s nothing more than that to Goma Dofu, but it’s a highly versatile dish, and you can use it for stuff like dessert, soup, and cooking on the grill. Although it takes more time and effort, I prefer to do it homemade style and make it from scratch.

Q: Specifically what type of kombu are you using?

Shimizu:
I use “Ma-Kombu,” which is Japanese kelp. Personally that’s the only type of kombu I use.
For this occasion I’m going to use dashi that I prepared beforehand.

The general process starts with cooking the sesame seeds and then crushing them down. I use the finished product as an extract to boil down with the Yoshino arrowroot. I don’t like to have any sesame seed husks in there whatsoever. I just want the sesame extract so that I get a springy texture and white color.
Typically you’ll find a lot of people make this by getting sesame paste to mix with the arrowroot.
However, in that case the sesame seed husks get mixed in as well, which adds a certain roughness to the texture. Moreover, the color doesn’t come out white if you use sesame seeds.

Okay, so first I’ll cook the sesame seeds and then lay them over some newspaper to let them cool off.
If you use them while they’re still warm then the sesame seed extract and the sesame oil will separate.

I’ll take the sesame seeds once they’ve cooled down and grind them up with a food
processor.
As they grind I’ll mix in some kombu dashi here and there.

Q: So you don’t want to just throw it all in at once?

Shimizu:
If you dump it all in at once then they’ll separate away without blending together. You want to let the oil in the sesame and the kombu dashi to emulsify, so it’s best to mix it in slowly.
This particular food processor lets you add things in with the cap still on, which makes everything a lot easier.

The mixture goes into a cloth bag that’s pressed on while I strain the sesame extract by hand.
The sesame should get whittled down until it’s smooth in texture. It takes about 20 to 30minutes to press the sesame down.

The strained sesame is just like the residue you get when making tofu.
Speaking of which, strained sesame like this doesn’t have any flavor at all, and other than this dish there isn’t much else you can do with it.

Shimizu:
So for ingredients I use an A-5 ranked fillet of Yamato Haibara beef. This beef is the best in
Nara.
The onions I use are called “Yuzaki Nebuka,” which are a sweet variety particular to Nara. In
addition to these I also use round daikon radish.
First I’ll take care of the daikon radish so that they’re ready to cook.
I’ll cut the round daikon radishes up, peel them, and then chamfer them so that they don’t fall
apart while cooking.
The daikon goes in rice-soaked water.
Q: Why do you use rice-soaked water?
Shimizu:

This will take out the bitterness from the daikon radishes, and their color will come out white as
well.
I’ll put them in a pot over some heat for a bit while their bitterness soaks out.
I’ll take the daikon radishes out after they’ve been appropriately heated up.
They’ll get moved into a separate pot, and then I’ll add niban dashi (2nd brew dashi), kombu
dashi, and kombu. From there I’ll cook everything together some more.
I’ll get the other stuff ready in the meantime.
The onions and meat will get sliced up, and then after that the meat gets grilled over a charcoal
fire.
I use yuzu skin to add some aroma.
I’ll cut the white part off and then cut the skin into little pieces.
The cut up beef will go on skewers with some salt added.
Then I’ll grill them over the charcoal fire. This will give the meat a nice charcoal aroma.
I can take a pause once I’ve lightly cooked each side.
Next up I’ll prepare the ankake sauce.