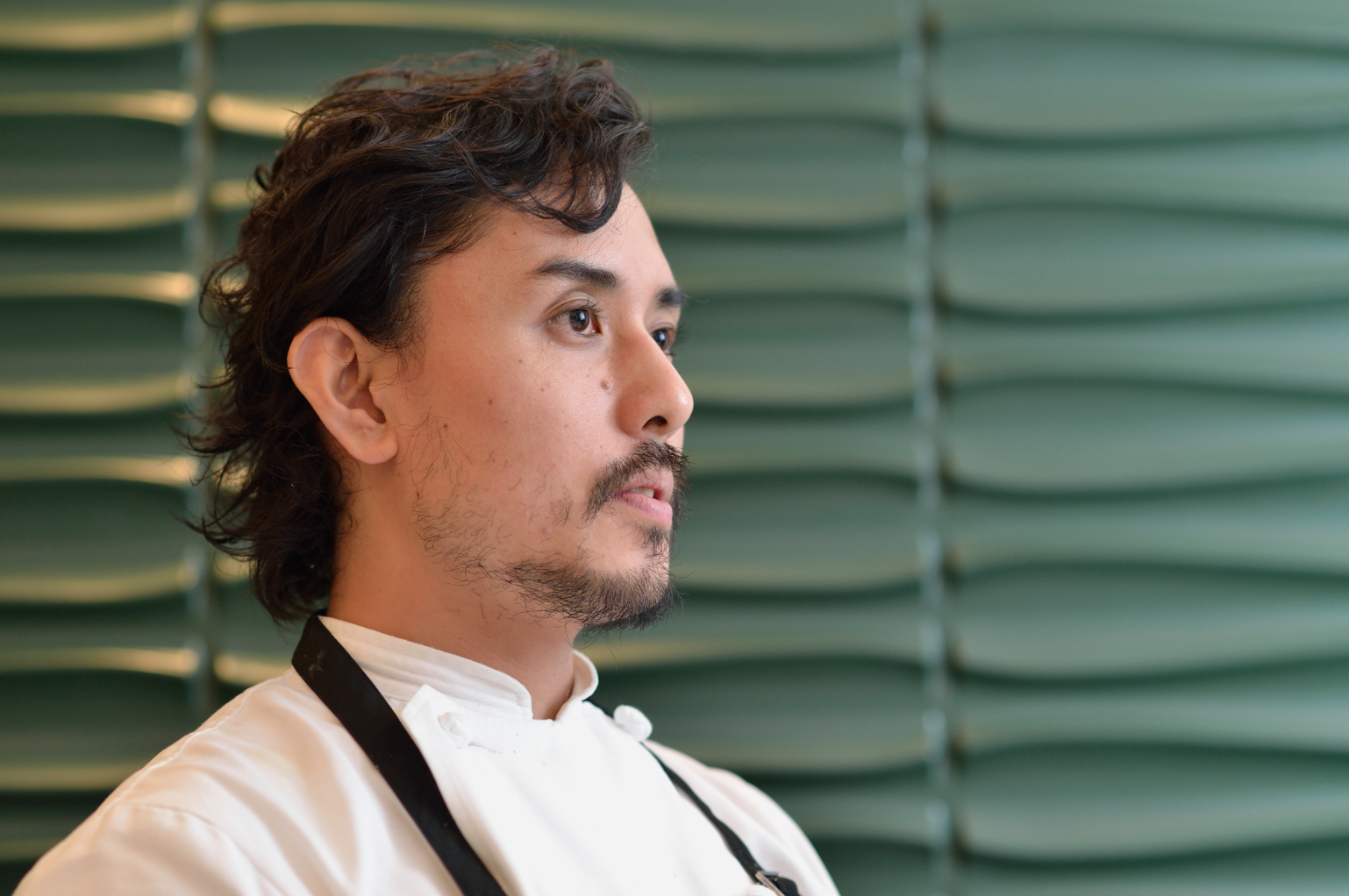 Resturant Difference is a popular French restaurant known for combining unexpected ingredients together in dishes such as “foie gras with clam, bamboo shoot, and tree sprouts.” The plating here is delicate and beautiful.
Delicious ingredients combined together do not make a delicious dish, according to Chef Fujimoto.
For his dishes, he uses extremely acrid elements that would be considered too astringent if eaten by themselves. He has a unique approach to cookingー by smashing sharp flavors together, he achieves harmonious results.
We had the chance to film Chef Fujimoto preparing two original dishesー a dish made with lily bulb, as requested by his customers, and shirako wrapped in beef. 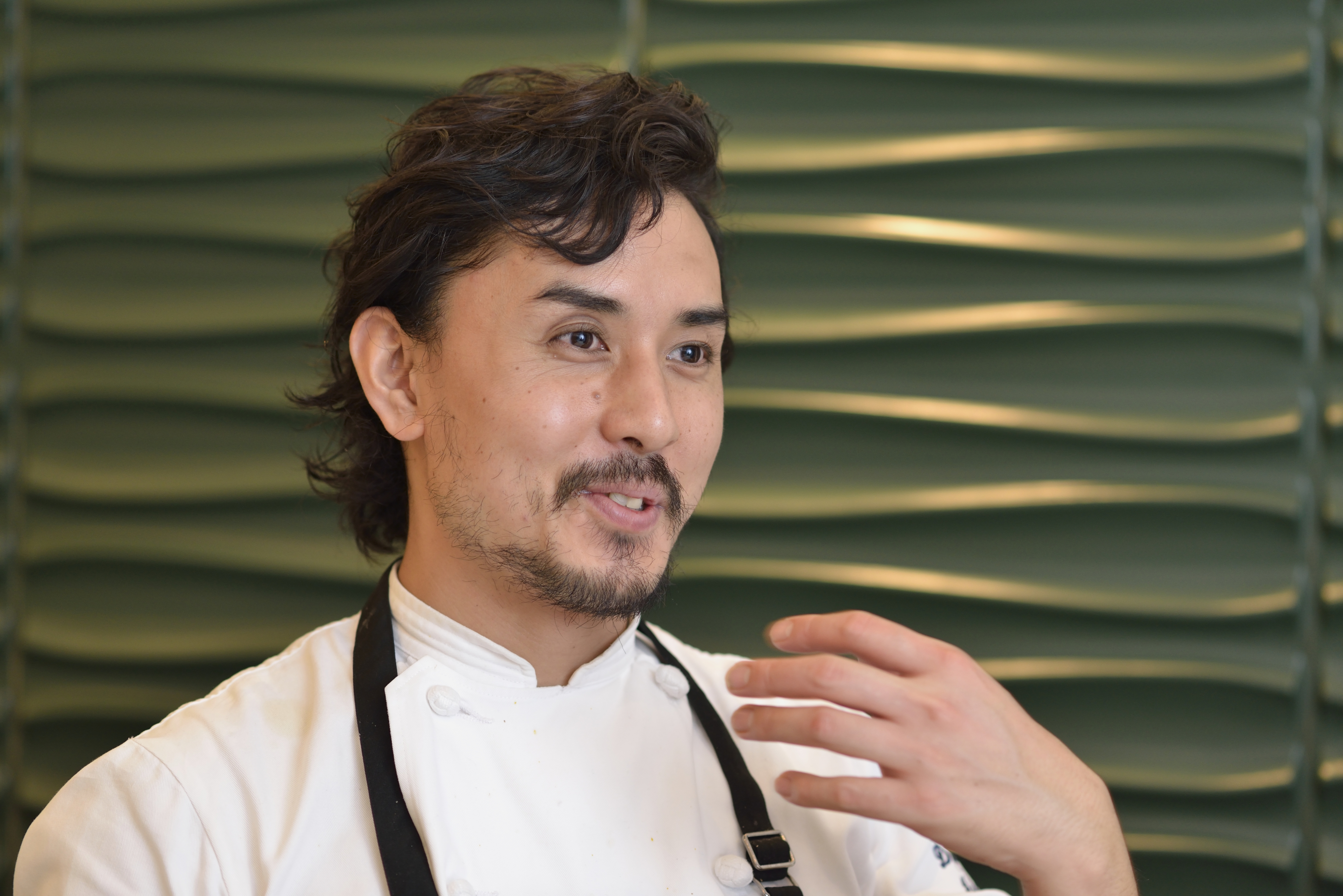 Q. Is there a particular order you put them in?

Fujimoto:
I try to put in the ingredients that can be ground smoothly first.
Fatty meat has a low melting point, so I put it in last.
I want to cut down frictional heat as much as possible. It’s important to make the mix smooth while reducing the number of rotations.

Q: What difference do the scallops make?

Fujimoto:
For pork, adding in some chicken would also work. However, adding scallops gives the sausages a different kind of flavor. I wanted an element that can pleasantly surprise customers when they eat this dish. This tastes kind of like a high quality fish sausage.

I believe combining delicious ingredients does not necessarily give a delicious result. One of the ingredients will end up having its taste muted or suppressed. For my dishes, I use overly sour or salty ingredients.
That offsets flavors and creates a balance. It’s like smashing sharp corners together to create a rounded edge.
I want to spark interest through these combinations and let customers feel like they’re tasting new flavors.

Next, I’ll be adding egg yolk and mixing it.
I’ll heat up some milk that has been scented with herbs and garlic.
The temperature is between the heating point of meat and the melting point of fat. It’s slightly warmer than a person’s body temperature.
If the mix is cold when I put the milk in, the fat can solidify. This makes it difficult for the ingredients to blend well.
In contrast, if it’s too hot, the meat might start burning. That’s why I aim for the temperature to be at the halfway point.
I’m adding and mixing in the heated milk.

Fujimoto:
These are the ingredients I’m going to use.
The blue crab will be used for the soup.
The whole mikan orange, including its peel, will be made into a paste to bring out its aroma. The Kita Akari potatoes will be pureed and fried.

I’m going to sautee the shirako (milt).
This beef was salt-pickled for a week, dried for two days, and then frozen.
By dehydrating the beef with salt, it kind of becomes like raw ham. It was frozen so that it can be made into thin slices.

Q: Is there anything special about this mikan orange?

Fujimoto:
The mikans were purchased directly from Kuramitsu Farm in Wakayama Prefecture.
They mature early, ripening even before they’re plucked.
The peel is thin and it has a rich aroma.
When you eat it, you’ll find the juice so fresh and tart.
It’s hard to explain, but it’s so juicy that it’s just like putting juice into your mouth.
This is the peel that was made into a paste.
It has a good balance of sweet and sour flavors. The fragrance is great too.

Q: No one but an expert would think of using a whole mikan with its peel intact.

Fujimoto:
I use it as an accent. The heavy flavors of the shirako are lightened by the mikan orange. The aroma is sharp, and I wanted something sour, that’s why I used the peel.