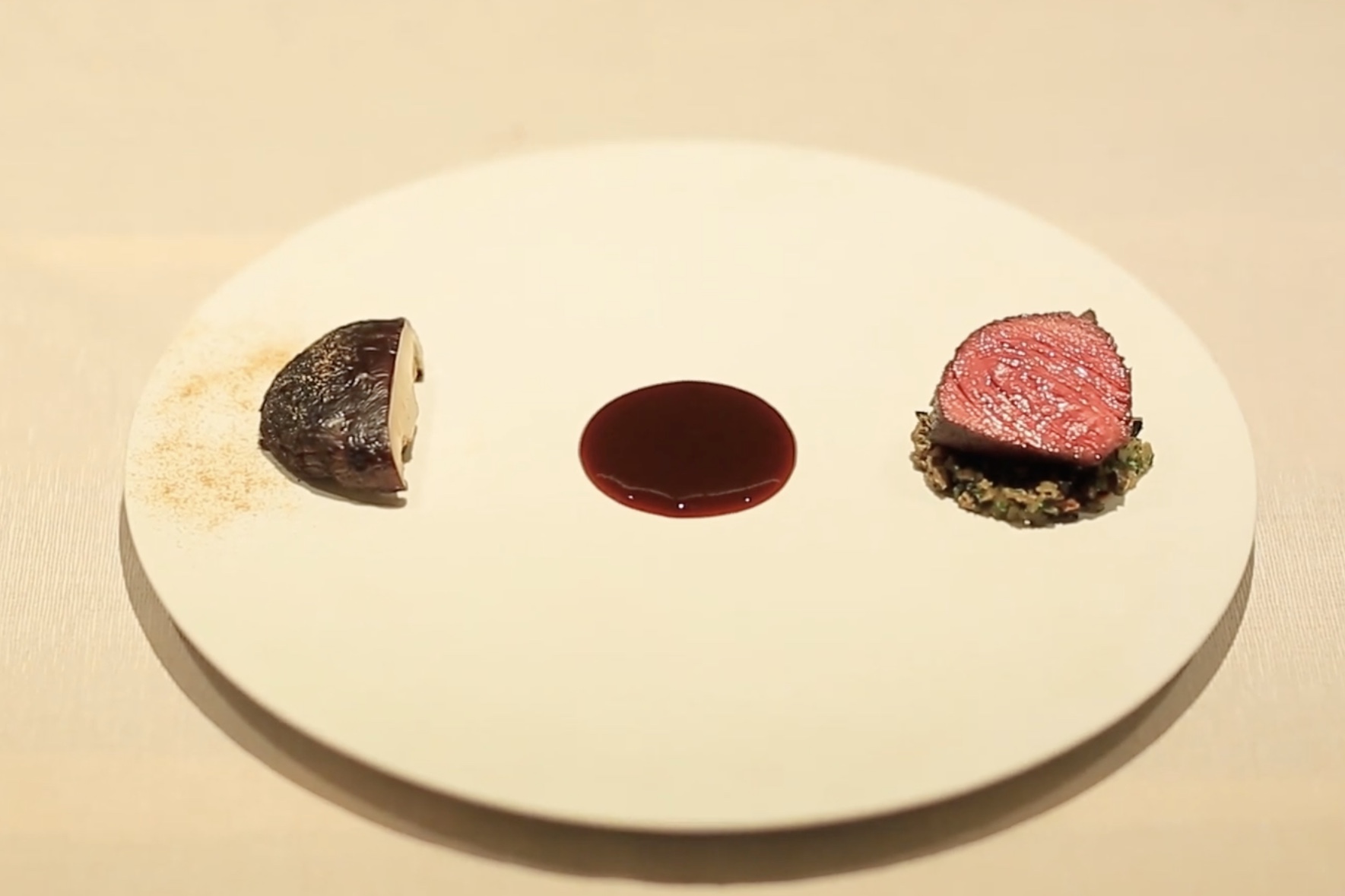 Fujita:
I’m going to put together a dish that takes “shintama” deer meat cooked with a technique called poché (boil/poach).
A “shintama” cut refers to a portion of meat between the deer’s inner and outer thigh, which happens to be the most tender.
I’ll start by removing the sinewy muscle tissue.

I’m going to add this to a vacuum-sealed pack together with reduced venison stock and warm them up together.

Q: Why do you use a reduced stock?

Fujita:
The flavor gets considerably shallow if the stock is watery.
By using a reduction for the venison stock you can get a strong, dense venison flavor that stands out even more than the meat would on its own.

Q: Other than that what type of ingredients do you add to the stock?

Fujita:
I add in onions and stuff like that to capture a sort of venison bouillon.

The reduced stock and shintama cuts go into the pack and then I use a vacuum sealer to close it up.
Then I’ll set the temperature to 52 degrees and slowly apply heat to it.
I do this very delicately for about an hour to make sure the meat doesn’t lose its juices.
After that I’ll finish it off over a flame.

Fujita:
I’ll put the garnish together while the venison is being poached.
This is made up of finely chopped iburi-gakko (smoked daikon radish pickles).
From there I bring together pulpwood shiitake mushroom pickles and chives.

Q: It’s quite novel to use something like iburi-gakko in French cooking, isn’t it?

Fujita:
Well, it’s certainly a favorite of food of mine.
But, my intention behind using it was to try to find that perfect match between a crisp texture and mild saltiness.

Q: Do you frequently use vinegar and other things like that for acidity?

Fujita:
Yeah, I rely on that quite a bit.
When acidity is added it can cut off particular flavors for me, which helps keep my course meals exciting for guests.

Fujita:
I take out the venison that was cooked with 52 degrees of heat.
At that point it is still raw for the most part.
I cook the entire exterior over a burner instead of a frying pan.
The umami flavor clings to the outside, so the idea is to caramelize it over the burner.
The meat is flipped over and over again while it’s cooking to help circulate the juices inside.
This part of the process is repeated several times.

Q: What’s the necessity behind giving it that extra attention?

Fujita:
The reason has to do with how gravity makes the meat juices sink to the bottom. By cooking the front while moving it around at the same time you can get the juices to spread more evenly. The meat will come out a lot more juicy if you do it this way.

When you cut it the juices inside should flow nicely right from the cross section. The moisture is held in until the very last moment and the juice remains locked inside the meat.

Fujita:
Now it’s time to plate it.
The venison is placed down once the iburi-gakko and shiitake mushroom pickles from before have been arranged.
The shiitake mushrooms take up about half of the plate, and the presentation itself is quite simple with some sauce added over it.
A shiitake powder is sprinkled over the shiitake mushrooms, and the heat will set off their aroma. This is good since guests will pick up on that aroma as soon as it’s served.
The sauce is made up of venison stock and a sweet sauce with Pedro Ximénez from Spain, which are both mixed together and heated up.
And then with that the dish is complete.

On a visual level the dish is very simplistic, with nothing other than meat and shiitake mushrooms. But it’s also the kind of dish where each aspect takes a lot of time and care.
This dish also really brings out the venison, and I think it highlights it in a way that really showcases how delicious it can be.
So, bon appétit!

Conceptually my food is about packing together complicated techniques and ideas. And then from there I like to give each ingredient an extended amount of attention. Finally, I want all of these aspects to add up to something that comes through in an incredibly simple way.
I consciously work to find a minimalist approach to expressing the beauty of each dish.