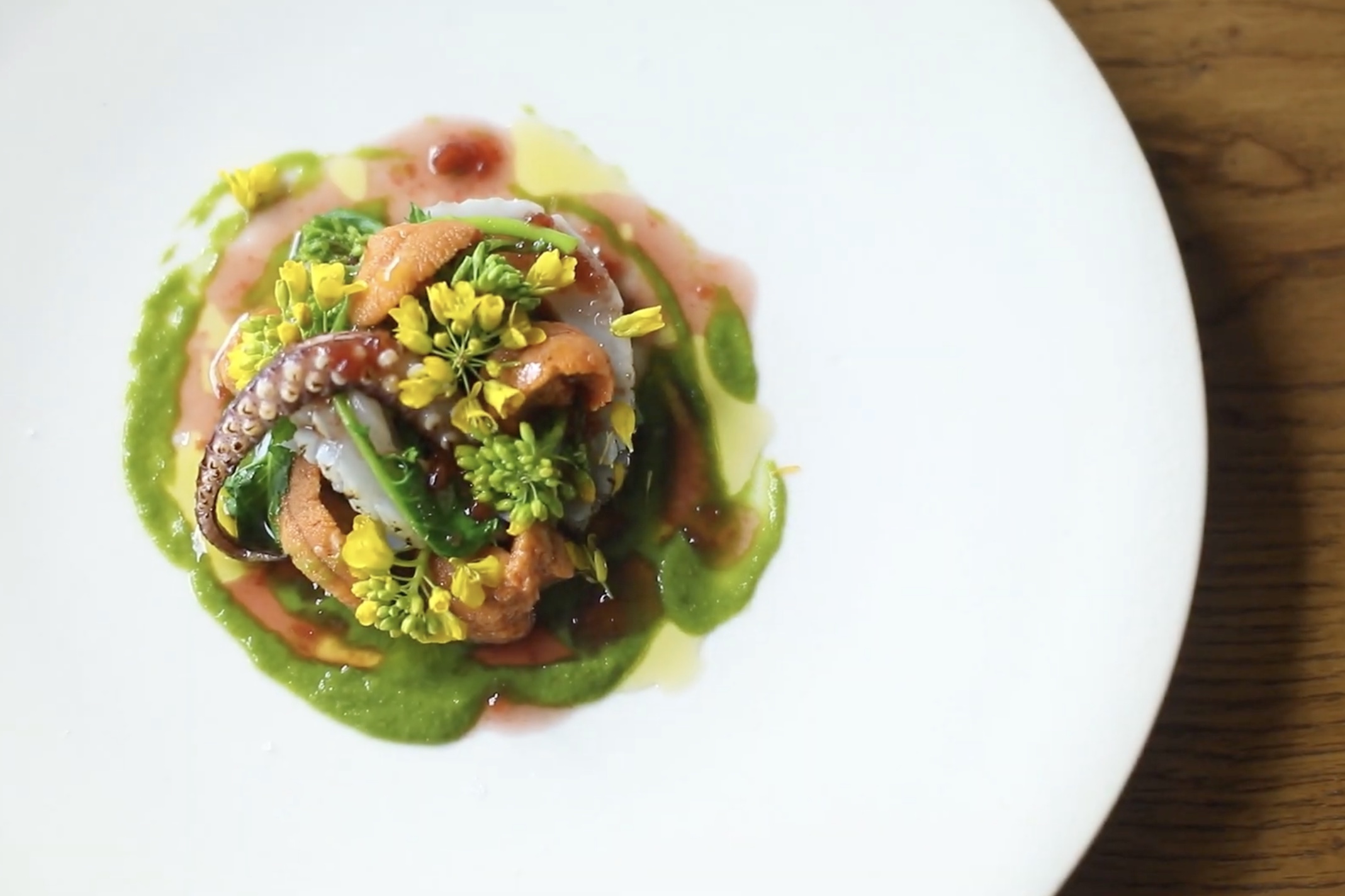 Okay, so let’s start with the ingredients I’m using.
The squid I’m I picked out is called “bigfin reef.” I keep it chilled in the freezer for a bit, but that actually breaks up its fibers and gives it a nice sticky texture.
Then I’m combining two different sauces. I take a rape blossom puree sauce with minced dried plum together with another sauce that uses reduced red wine and umeshu (plum liqueur). I also pair this with sea urchin. I use this dish as a way to showcase the spring season.

This here is the bigfin reef squid.
First I have to clean the squid. I’m going to remove all of the insides and slice away the head portion.

Yamada:
All squid is more or less the same.
They’re a lot like fish in the way that their bone structure is the same.

The cut up portions of squid are going to need some light scoring.

Q: Why does it need scoring?

Yamada:
Scoring it will widen its overall surface area, which helps bring out its sweetness. It adds some tenderness as well.

After that I’m going to spread olive oil on it and get it cooking over the burner.
The squid will lose its moisture if I add in salt ahead of time, so I’ll wait and add salt when it’s done.

The red wine and umeshu are going into the pot along with some pickled ginger, then I’m
going to reduce it down by half.
If I were to just throw the ginger in as is it would be very strong in flavor, which I would say is
too much when it comes to Japanese and Chinese cooking. To avoid that I pickle it first to
tone down the flavor.

Yamada:
Okay, so here is where I tie everything together.

I’m going to boil the rape blossoms with a kombu dashi broth for about 10 seconds.

I use kombu dashi for basic standard pasta. I also use this dashi for boiling veggies. A lot of dishes at my restaurant get just a bit of it. I bring things together with a kombu base to make sure the flavor doesn’t dissipate.

The squid and rape blossoms are presented on top of the sauce made from rape blossom paste.
Then the sauce I prepared from reduced red wine and umeshu mixed with dried plums is going on top.
I also add on some olive oil.
Lastly I’ll plate the sea urchin to complete the dish.

Q: I would think that the squid and sea urchin go together quite nicely, right?

Yamada:
Yeah, I think so too.
When I come up with something I like to break down existing recipes and try adding in different ingredients to give the dish my own personal touch. But, in the end if you pair up the ingredients well then the dish you’re making will end up right where it needs to be in terms of flavor.