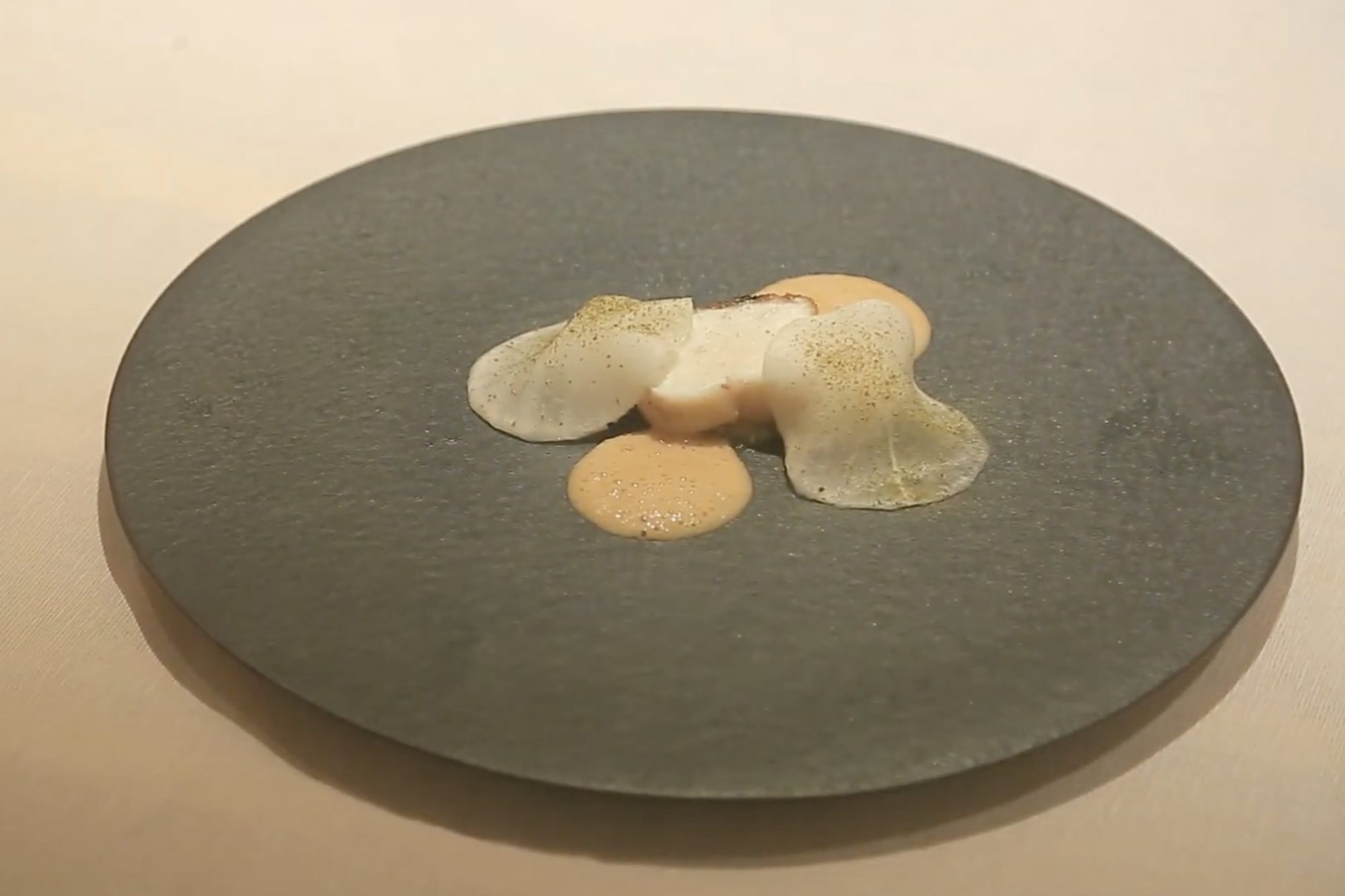 Q: As a chef you spent time training at a sushi restaurant. Do those experiences still resonate with you now?

Fujita:
Oh yeah, very much so.
My approach to hitting that saltiness in fish and other things like that is a lot like a sushi chef, so those sorts of methods certainly do show up in my cooking.

This time I’m going to be working with fish, which will be blackfin sea bass from the Goto Islands.
For now I’m going to get the thickest portions of meat and slice it up the way I need to.

I’m going to add on trehalose to bring out a bit of saltiness from the fish.

Q: What kind of effect does trehalose have?

Fujita:
It separates the moisture and adds an emission effect.
Typically fish marinades have things like salt, spices, and sugar.
I want a marinade that gives a gentle texture, but I don’t want to add on sweetness. So for sweetness I use half sugar and half trehalose.
Just the salt alone is enough to give the flavor some sharpness.

From there I’m going to set it in the fridge for a while to let the moisture separate.

Fujita:
For the garnish I’m going to put together some grated daikon radish along with raw lily bulbs.

The daikon radish is sliced up continuously.
And then I’ll sprinkle on kombu powder here and there to bring out a light saltiness and separate the moisture.
The general idea is sort of like instant pickles.

I use three different forms of daikon radish, which consist of slices, grated bits, and a puree.

Q: Was this something that you thought of when you were putting together your new menu?

Fujita:
My aim is for something simple, you know. But, “simple” doesn’t really apply to this.
This dish takes fish, squid, daikon radish, and lily bulbs, which are all white in color, and then combines all of their contrastive textures and elements.
Each of these various components are preserved to keep the flavors interesting with a layer of complexity.
But, this is it in terms of how everything is put to use. That’s the general idea behind the dish.

Fujita:
When it comes to the fish I’m going to cook the outside first.
After that I’ll gently cook it more to get the interior of it.
The idea is to get the meat-side up and hit it with a flame for 1-minute intervals.

While that’s going I’ll start preparing the squid.
I take squid that has a nice level of freshness and then I’ll chill it for a moment before using it.
When you chill fresh squid after cleaning it the moisture can draw out and it gets a level of stickiness.
When the squid is ready I start slicing it up.
I’ll add a bit of salt evenly throughout it.

Q: When did you come up with this dish?

Fujita:
I thought about it for quite a while.
I kept adjusting the recipe and stuff like that while I made it.

I don’t cling to any of my old recipes.
I’ll use them for reference, but I’ve grown so much since my early days.
I want to put out the very best food that reflects the way I’ve grown as a person.

Fujita:
So, here is the final bit of work.
I take the flame-heated fish from before and cook it with a frying pan.
I’ll cook it a little away from the flame and get the fish’s temperature up little by little.
Lastly, I’ll cut out what I need.
The moisture holds in the cross-section and you’ll see a rainbow-colored shine.
The exterior is grilled thoroughly but the inside is cooked at the very last moment.

I’d score this at about an 80 as far as time is concerned. If you get the heat right you can get an even better look.

Now it’s time to plate it.
The squid goes on top of the roasted lily bulbs, and then the sliced daikon radish goes on top of that.
Dried capers are put through a pepper grinder to sprinkle on top.
At the very end daikon radish puree, fresh cream, white wine, and fish stock are mixed together into a sauce that finishes the dish off.

This dish also looks quite simple in its presentation, but once you try it you’ll get a sense of each ingredient’s texture and a complex assortment of flavors. However, all of these flavors come together harmoniously into a single dish.
Bon appétit!