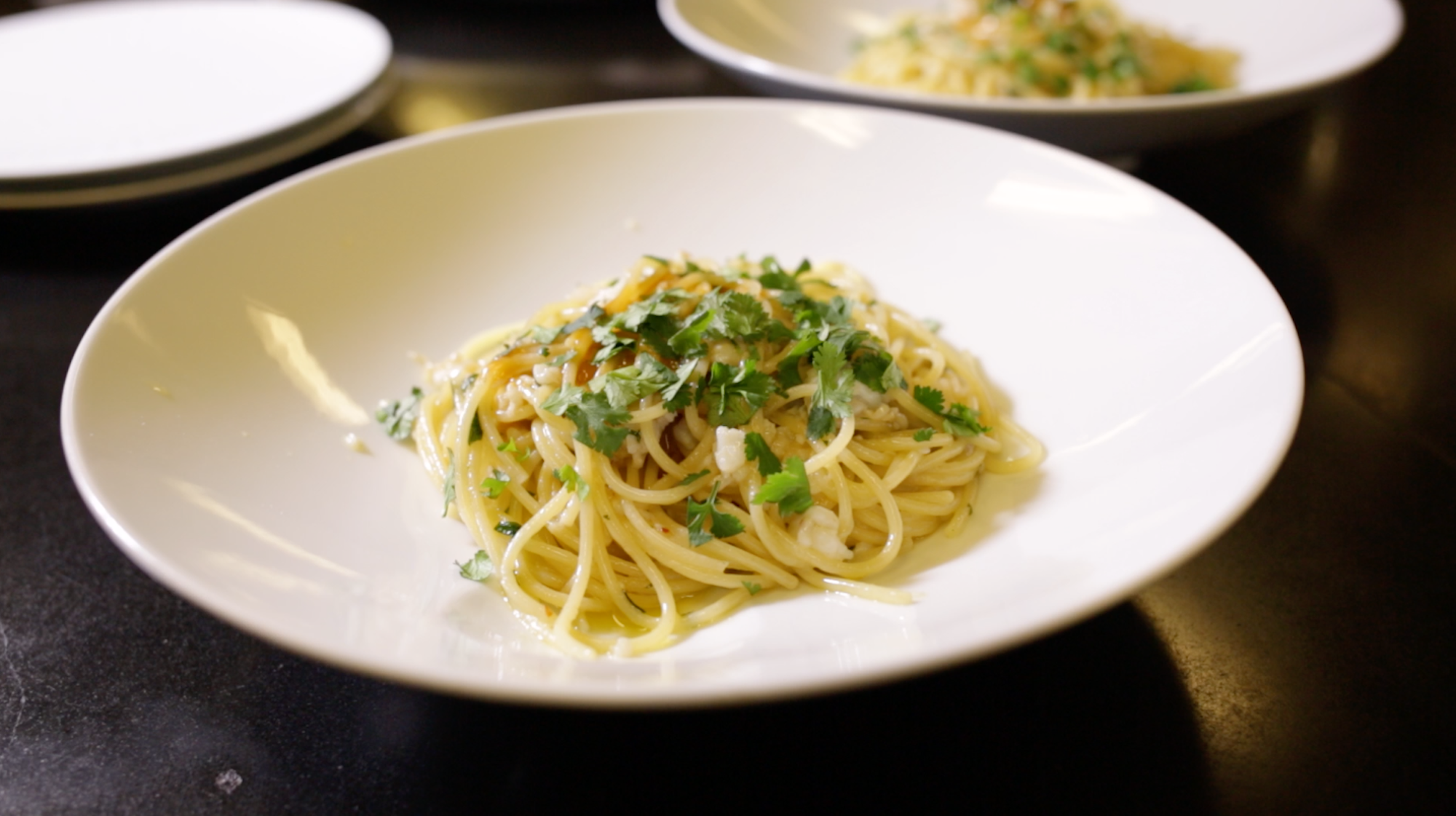 ■Curing the crab
First, I blanch it for about a minute so that it’s easier to take out the meat. Most of it is completely raw, making it difficult to take out.
I then shell the crab using scissors. After that, I sprinkle some salt, add kelp and vacuum seal it.
Vacuum sealing allows the flavors to infuse and for the crab meat to develop a richer taste.
Vacuum sealing is a preparation method I use quite often for marination as well.
I let it sit for one or two days.
I start taking the meat out of the shell. It’s still quite raw, so it needs to be squeezed out.

■Making crab broth
The crab shells and kelp are used for making the broth. Adding parsley for fragrance, the ingredients are boiled and cooked for about five minutes. Once a foam forms on the top, remove it carefully and strain the broth.

■Pasta sauce with crab and egg yolk
It’s still early in the season, so there aren’t a lot of crabs with eggs inside. That’s why I’ll be preparing the dish with egg yolk. In the best part of the season, we can find plenty of eggs inside the crabs, which are cured and used for the sauce.
The ingredients are heated by lightly mixing them in warm water and adding some nut oil and peanut oil. This process is done to raise the concentration as well as to sterilize it.
Because I’ll be making it into a peperoncino, I’ll stir fry some crushed garlic and dried red chili in olive oil. Adding parsley for fragrance, I’ll pour in the crab broth from earlier. Stir frying it for a while draws out the flavors of the garlic. Sweetness and flavor are water-soluble, so cooking it like this brings out the flavors.
Just finely chopping the garlic gives this aglio olio a strong, garlicky taste. (aglio refers to garlic, while olio is oil)

Vol.4：Boiling the pasta and arrangement

■Boiling the pasta and arrangement
Mix in the sauce with boiled pasta while continuing to heat it. The key is for it to be hot. Finally, add in the crab meat and innards. Once it’s arranged, it’s complete.
This dish allows for the crab to be enjoyed in a simple way. I avoid adding too much of other elements so that it doesn’t interfere with the taste of the crab.
For that reason, I vacuum seal and put effort into the crab, so as to further improve its taste.
I want to continue to make even more dishes that are simple, and make the main ingredient stands out.