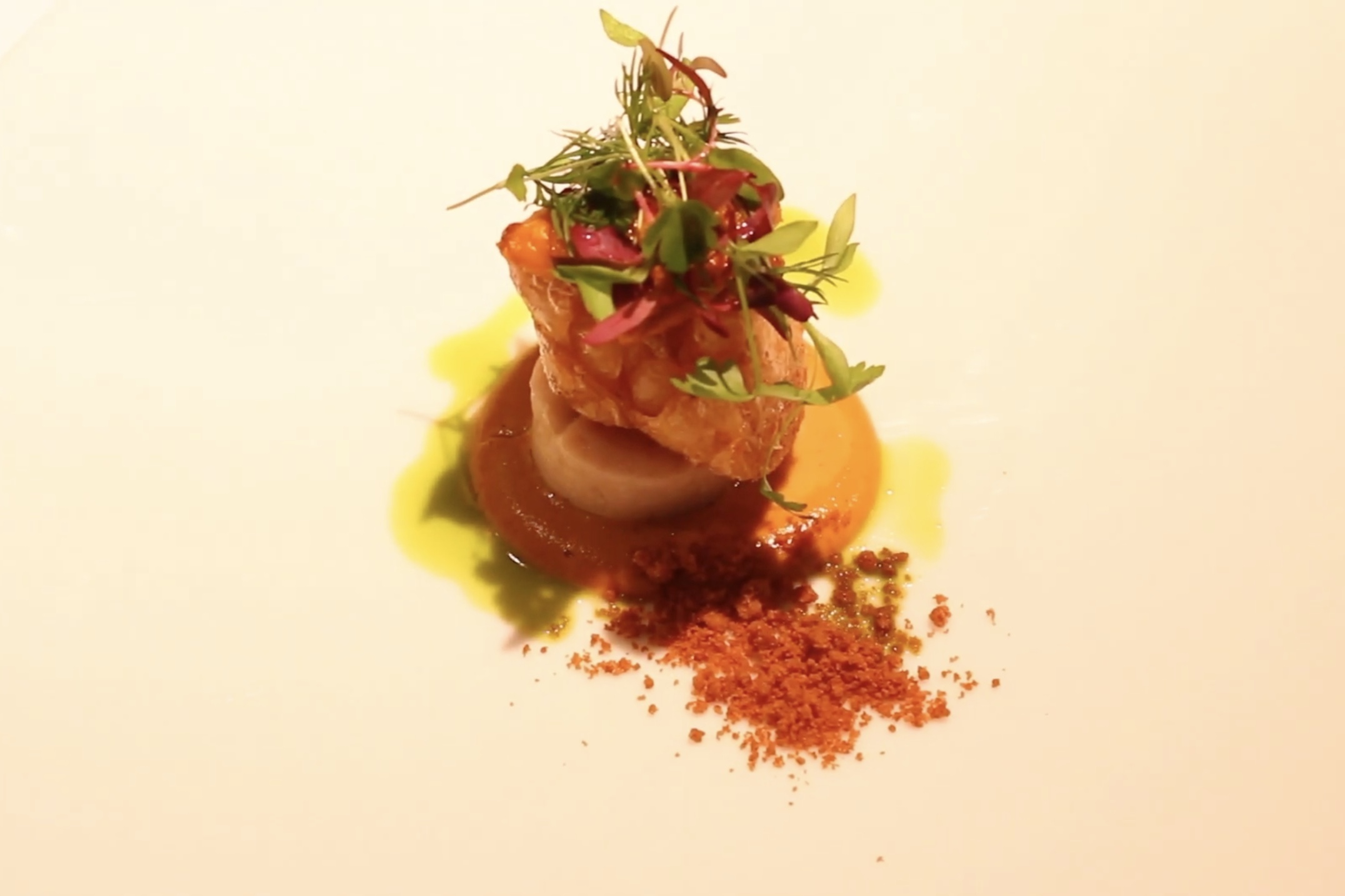 Q. Is there a particular order you put them in?

Fujimoto:
I try to put in the ingredients that can be ground smoothly first.
Fatty meat has a low melting point, so I put it in last.
I want to cut down frictional heat as much as possible. It’s important to make the mix smooth while reducing the number of rotations.

Q: What difference do the scallops make?

Fujimoto:
For pork, adding in some chicken would also work. However, adding scallops gives the sausages a different kind of flavor. I wanted an element that can pleasantly surprise customers when they eat this dish. This tastes kind of like a high quality fish sausage.

I believe combining delicious ingredients does not necessarily give a delicious result. One of the ingredients will end up having its taste muted or suppressed. For my dishes, I use overly sour or salty ingredients.
That offsets flavors and creates a balance. It’s like smashing sharp corners together to create a rounded edge.
I want to spark interest through these combinations and let customers feel like they’re tasting new flavors.

Next, I’ll be adding egg yolk and mixing it.
I’ll heat up some milk that has been scented with herbs and garlic.
The temperature is between the heating point of meat and the melting point of fat. It’s slightly warmer than a person’s body temperature.
If the mix is cold when I put the milk in, the fat can solidify. This makes it difficult for the ingredients to blend well.
In contrast, if it’s too hot, the meat might start burning. That’s why I aim for the temperature to be at the halfway point.
I’m adding and mixing in the heated milk.

Fujimoto:
I cover the ground meat in plastic wrap and shape it like a sausage. Next, I’ll put it into water heated to 65 degrees and put it over a flame.

Now, I’ll start preparing the lily bulb. It was wrapped in aluminum foil and heated in an oven for about one hour. It’s soft and flaky, like a potato.

This is a boiled down mixture of sea urchin, shellfish broth, white wine, and fresh cream. I’ll be using it as a sauce, so I’ll heat it up.

I’ll heat up the sausage from before in the oven.

In the meantime, I’ll sear the sea urchins. By searing them, the sea urchin’s characteristic bitter alum is offset by the bitter burnt flavors.

Fujimoto:
Now it’s time for plating.
I’ll take out the heated sausage and slice it.
I’m putting the sausages, lily bulb, and seared sea urchin on top of the heated sauce.

On top, I’m pouring a sauce made with eight types of herbs, including cumin, a herb commonly used in curry.
Finally, I’ll pour and mix in a sauce made with white wine, vinegar, lemon juice, and olive oil. Then it’s done.
I put a lot of stuff on this dish, so we have to be careful not let it fall apart when we’re carrying it (haha).