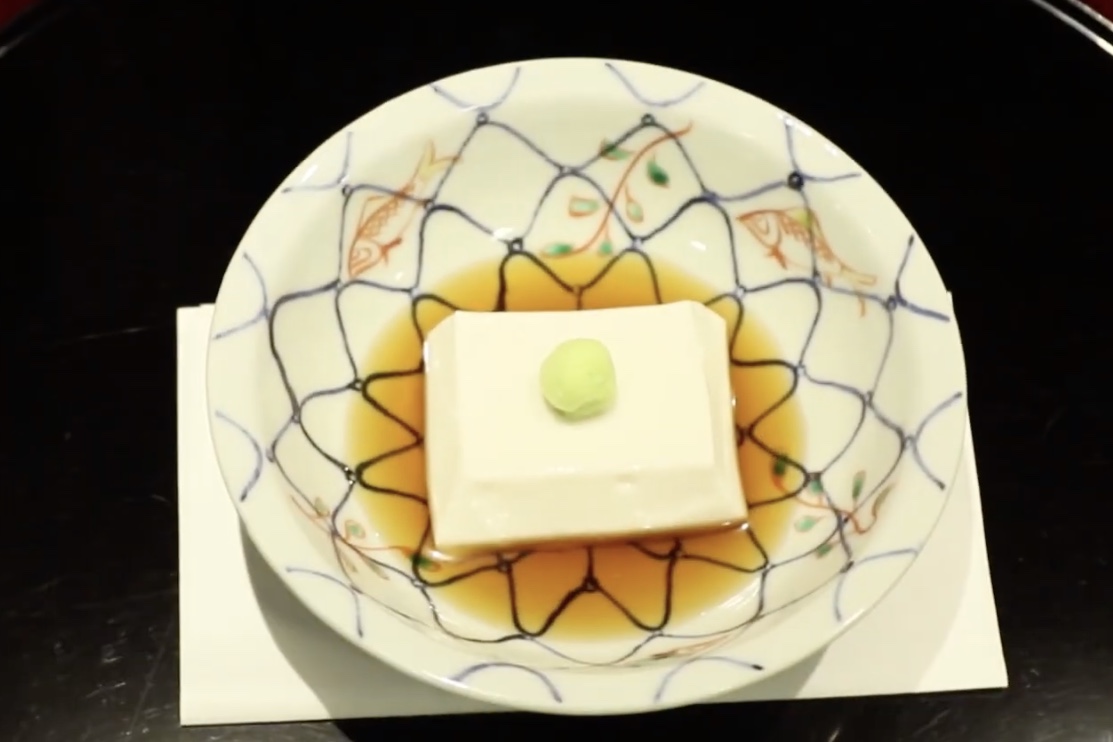 Shimizu:
The Goma Dofu only needs 3 things: hulled sesame seeds, Yoshino arrowroot, and kombu dashi.
There’s nothing more than that to Goma Dofu, but it’s a highly versatile dish, and you can use it for stuff like dessert, soup, and cooking on the grill. Although it takes more time and effort, I prefer to do it homemade style and make it from scratch.

Q: Specifically what type of kombu are you using?

Shimizu:
I use “Ma-Kombu,” which is Japanese kelp. Personally that’s the only type of kombu I use.
For this occasion I’m going to use dashi that I prepared beforehand.

The general process starts with cooking the sesame seeds and then crushing them down. I use the finished product as an extract to boil down with the Yoshino arrowroot. I don’t like to have any sesame seed husks in there whatsoever. I just want the sesame extract so that I get a springy texture and white color.
Typically you’ll find a lot of people make this by getting sesame paste to mix with the arrowroot.
However, in that case the sesame seed husks get mixed in as well, which adds a certain roughness to the texture. Moreover, the color doesn’t come out white if you use sesame seeds.

Okay, so first I’ll cook the sesame seeds and then lay them over some newspaper to let them cool off.
If you use them while they’re still warm then the sesame seed extract and the sesame oil will separate.

I’ll take the sesame seeds once they’ve cooled down and grind them up with a food
processor.
As they grind I’ll mix in some kombu dashi here and there.

Q: So you don’t want to just throw it all in at once?

Shimizu:
If you dump it all in at once then they’ll separate away without blending together. You want to let the oil in the sesame and the kombu dashi to emulsify, so it’s best to mix it in slowly.
This particular food processor lets you add things in with the cap still on, which makes everything a lot easier.

The mixture goes into a cloth bag that’s pressed on while I strain the sesame extract by hand.
The sesame should get whittled down until it’s smooth in texture. It takes about 20 to 30minutes to press the sesame down.

The strained sesame is just like the residue you get when making tofu.
Speaking of which, strained sesame like this doesn’t have any flavor at all, and other than this dish there isn’t much else you can do with it.

I’ll also add in some brine. The moisture escapes while it’s getting boiled down, so the salt is added in to help adjust the moisture content for the finished product.
I put the brine together on my own. I take Banshu-Ako salt mixed with egg whites, which has some water added in before it’s put over heat.
When you do that the egg whites solidify and the salt bits stick together, which produces a clear brine.
When you have brine like this the salt will thoroughly adapt to the ingredients you’re using, which makes it very easy to cook with.

Now I’m going to put this over some heat.
It’s going to immediately clump together when it reaches a certain temperature, so when that happens I’m going to turn the heat down.
If you don’t get the timing right then the gluten will come together instantly, and you’ll end up with clumps. If that happens it will come out dry.

I’ll mix this with a whisk until it’s smooth. They say that you shouldn’t use stainless steel tools with Japanese cuisine since it gives things a metallic taste, but this is something that I like to use.

Once it solidifies I’ll turn the heat on medium and keep mixing it harder.
I’ll mix it just like this where it’s hitting around the pot. This gives it a springy texture.
If you just mix it normally without getting that springiness then the Goma Dofu won’t taste right.

I’ll cut off the heat, mix it well, and then switch the heat back on. I repeat this whole process three times.

When it springs up I can check to see if it’s done by whether it’s stringy or not.
I’ll take the finished product and pour it into the mold.

Air will get inside during this, so I’ll flip the mold over to make sure the air gets out.
I’ll seal it over with some wrap to make sure the surface doesn’t dry out.
If I don’t wrap it up then the color will turn brown and the texture won’t come out right.

I’ll put it over some ice water to chill it.
That’s the last bit of prep work for Goma Dofu.

Q: Can you chill it in the fridge?

Shimizu:
You can chill it must faster if you use ice water instead of a fridge. Also too, if you put
something hot in the refrigerator then it will bring the fridge’s internal temperature down, which can harm other food and ingredients you have stored inside.

Shimizu:
So then the Goma Dofu that I chilled earlier gets cut into portions that are ready to serve.
Each serving of Goma Dofu has a simple presentation with just a bit of wasabi and nothingelse.