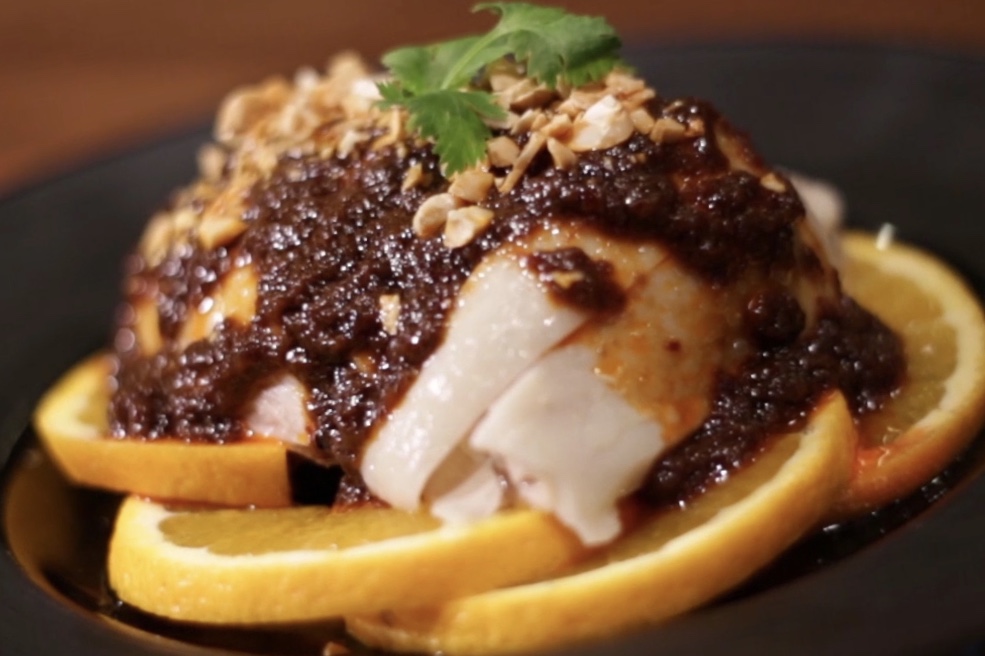 The dish known in Japan as “Yodare Chicken” (literally “Drool Chicken”) is written in Chinese as “Kou Shui Ji” (literally “Saliva Chicken”). The dish consists of steamed chicken topped with a spicy sauce, and the name of the dish is used figuratively, because the dish is so delicious, that when you think back on it, you will start to salivate. At this restaurant, we make our own sauce in house, and serve this dish saturated with it.
To prepare the dish, the marinade is made first. The marinade not only erases the particular odor of chicken, but it also draws out the savoriness of the meat. The marinade is made with water, green onions, and ginger, mixed with Chinese Shaoxing Wine, and salted to flavor. Deboned, steamed chicken is then added to the marinade, and left to marinade overnight.

The green onions and ginger are added for fragrance, and the Shaoxing Wine is used for deodorization purposes. Add in salt, bring the mixture to a boil, then cool to room temperature. Add in the chicken, and leave to marinade overnight.

Since time is an issue for this session, chicken that has been pre-cooked, steamed, and cooled with ice water will be used. It is important not to over-steam the chicken.

The tenderloins and other parts with a thin layer of skin are removed and stripped. Also, the skin is handled in such a way so as not to break the skin.

Finally, all of the clotted blood is thoroughly removed and cleaned off with water. Leftover blood can spoil the marinade, and can lead to food poisoning, especially in the summer, so this cleaning process is handled thoroughly.

Wiping off all moisture leftover from washing the chicken, the chicken is then added to the prepared marinade, and left to marinade overnight. Since the green onions and ginger are no longer needed, they are scraped off. Paper towels are used to thoroughly soak up any remaining marinade. With that, the preparation is finished.

Heated peanut oil is added to a mixture of ground red chili pepper, Pishen doubanjiang, and tahini (*a ground sesame seed paste). The oil is added and mixed in slowly.

By doing this, not only will the fragrance be drawn out, but the excess saltiness of the doubanjiang will be rounded out by the heat.

Next, garlic, sugar, Chinese soy sauce, and dark soy sauce are mixed in. Finally, chili oil is added in, and the sauce’s spiciness and body are adjusted.

The sauce, too, is left to sit for a day before use. Since the sauce will keep for a while, once you make the sauce, you can use it for some days afterwards.

Oranges and cucumbers are prepared as supplements. By making incisions into the cucumbers, they will be texturally easier to eat. In my generation, these skills were particularly desired, and I personally attempted to make shapes such as flowers, butterflies, and dragons out of vegetables. If I tried such things now, my hands might just cramp up (lol).

The steamed chicken marinated overnight is then covered with Yodare Sauce.

After the sauce has been poured over the chicken, crushed cashews are sprinkled on as a finishing touch.