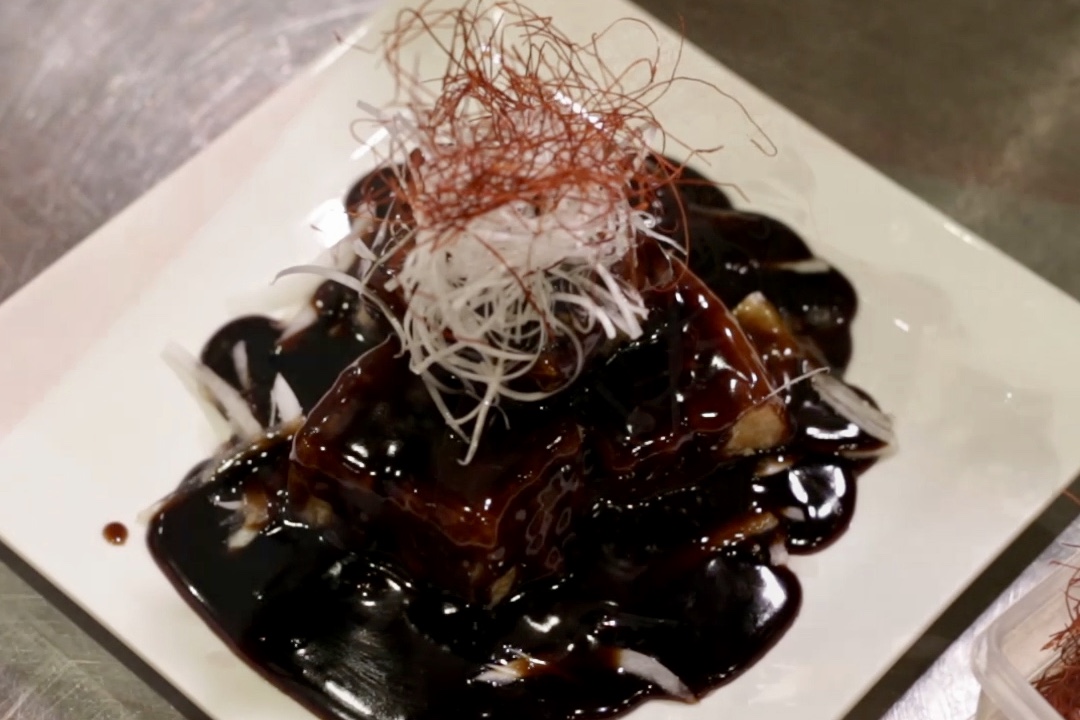 Vol. 1: Preparations for the Use of Pork Belly

This dish uses the Italian black grape juice concentrate known as “Vincotto.” This is added into the sauce of this black vinegar sweet and sour pork dish. Since the sauce will be made in a short while, let’s first start off with the pork belly.

Since time is an issue for this session, we will start from a point after all the preparations have been made.
The preparations are as follows:
1. Parboil the pork belly removing all froth rising to the top.
2. After that, add to the soup green onions, ginger, and salt to flavor, then steam everything together in a steamer for 80 minutes. Steaming will cause a decent amount of fat to be released.
3. After that, put into refrigerator to cool overnight causing the fat to whiten and harden. Remove the fat.

And that will bring us up to what we have now. It is tasty enough to be eaten as is. You may even mix it into a salad, or sauté both sides.

For this session, we will be making sweet and sour pork, so the prepared pork belly will be cut into slices of about 50-60 g (1.8-2 oz). Since the meat has been cooled in the refrigerator, it will be steamed for 50 minutes for softening.

Cooking starts off with imitation, and then you can add a little bit of yourself into the mix. I really think that is the essence of cooking. Even this Vincotto was introduced to me by a fellow chef, but the exact combination and balance of the sauce is all done by me, and is an original creation.

The Vincotto has firmly settled at the bottom of the bottle. Since it affects the richness and fragrance, water will be used to remove it. Water and honey are then added, and heated with fire. After having been brought to a boil, any froth produced is removed, and black vinegar from Shanghai as well as apple cider vinegar are added. Since adding the vinegar while the heat is still on will cause the acidic flavor to evaporate, it is important that the black vinegar and apple cider vinegar are added only after the heat has been turned off.

This amount of sauce is enough for 70-80 people. It also keeps, so once you have made it, you can use it for some days afterwards.

The steamed pork belly prepared a short while ago is quickly dusted over with powdered starch and fried. The prepared sauce is then thickened with starch. It is important to add in the starch slowly so as to avoid thickening the sauce too much. Place the pork belly on the serving plate, cover it with sauce, and it is finished.

This dish is sweet and sour pork, but using pork belly that has been stewed and cubed into large cuts is my original creation. Although you may have seen a dish like this at other restaurants, I think that I am the original pioneer of the trend (lol) .