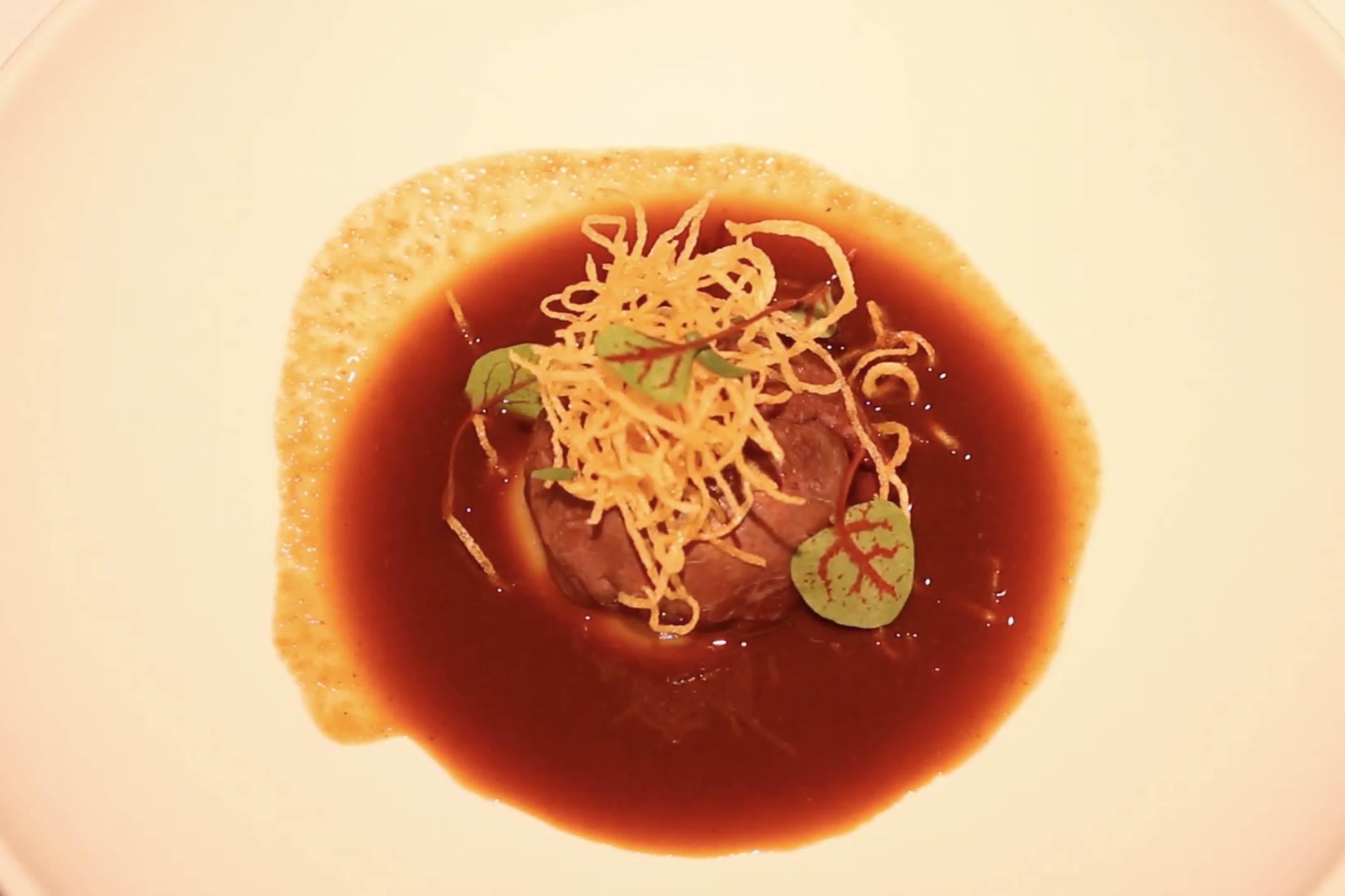 Fujimoto:
These are the ingredients I’m going to use.
The blue crab will be used for the soup.
The whole mikan orange, including its peel, will be made into a paste to bring out its aroma. The Kita Akari potatoes will be pureed and fried.

I’m going to sautee the shirako (milt).
This beef was salt-pickled for a week, dried for two days, and then frozen.
By dehydrating the beef with salt, it kind of becomes like raw ham. It was frozen so that it can be made into thin slices.

Q: Is there anything special about this mikan orange?

Fujimoto:
The mikans were purchased directly from Kuramitsu Farm in Wakayama Prefecture.
They mature early, ripening even before they’re plucked.
The peel is thin and it has a rich aroma.
When you eat it, you’ll find the juice so fresh and tart.
It’s hard to explain, but it’s so juicy that it’s just like putting juice into your mouth.
This is the peel that was made into a paste.
It has a good balance of sweet and sour flavors. The fragrance is great too.

Q: No one but an expert would think of using a whole mikan with its peel intact.

Fujimoto:
I use it as an accent. The heavy flavors of the shirako are lightened by the mikan orange. The aroma is sharp, and I wanted something sour, that’s why I used the peel.

Fujimoto:
I’ll start by preparing the shirako.
The shirako here isn’t procured. It’s extracted from the cod right here in the kitchen.
I’m sprinkling some flour on the shirako.

Now, I’m going to use some butter.
I want to fry it to bring out the flavors. The outer part will be slightly crunchy and the inner parts creamy.

After frying it like this, I sprinkle some salt. Then, I wrap it in the sliced beef and let it sit.
The beef is warmed with the heat from the shirako.

This is the blue crab soup. It takes about half a day to make.

Q: What kind of ingredients did you use for it?

Fujimoto:
First, I make a delicious tomato soup using onion, garlic, carrot, celery, tomato, bouillon, broth from shellfish, chicken, and fish, as well as white wine.
After that, I put in the fried crab and let it simmer to transfer the aroma and flavor.
If I want to use it as a sauce, I let it simmer for longer.

Fujimoto:
I’m going to let the blue crab soup simmer under strong heat, so as to bring out some astringency.
I’m deliberately trying to bring out sharp and intense flavors here. Just having it by itself is not delicious, but combining it with other dishes tones down the astringent flavors and makes it stand out more.

I’ll mix in the potato puree. Instead of mixing in light flavors, this is also like smashing sharp corners together to create a rounded edge.

The beef-wrapped shirako is placed on top of the heated potato puree, along with the mikan paste and fried potatoes. It’s then topped with herbs.
Herbs that are used to garnish parfaits are usually bigger and left uneaten.
I try to make my herbs tiny so that they can be eaten with the food.

They’re sprinkled at the table before the customers eat the blue crab soup.
This dish is substantial and has gotten great reviews from customers. Do give it a try.