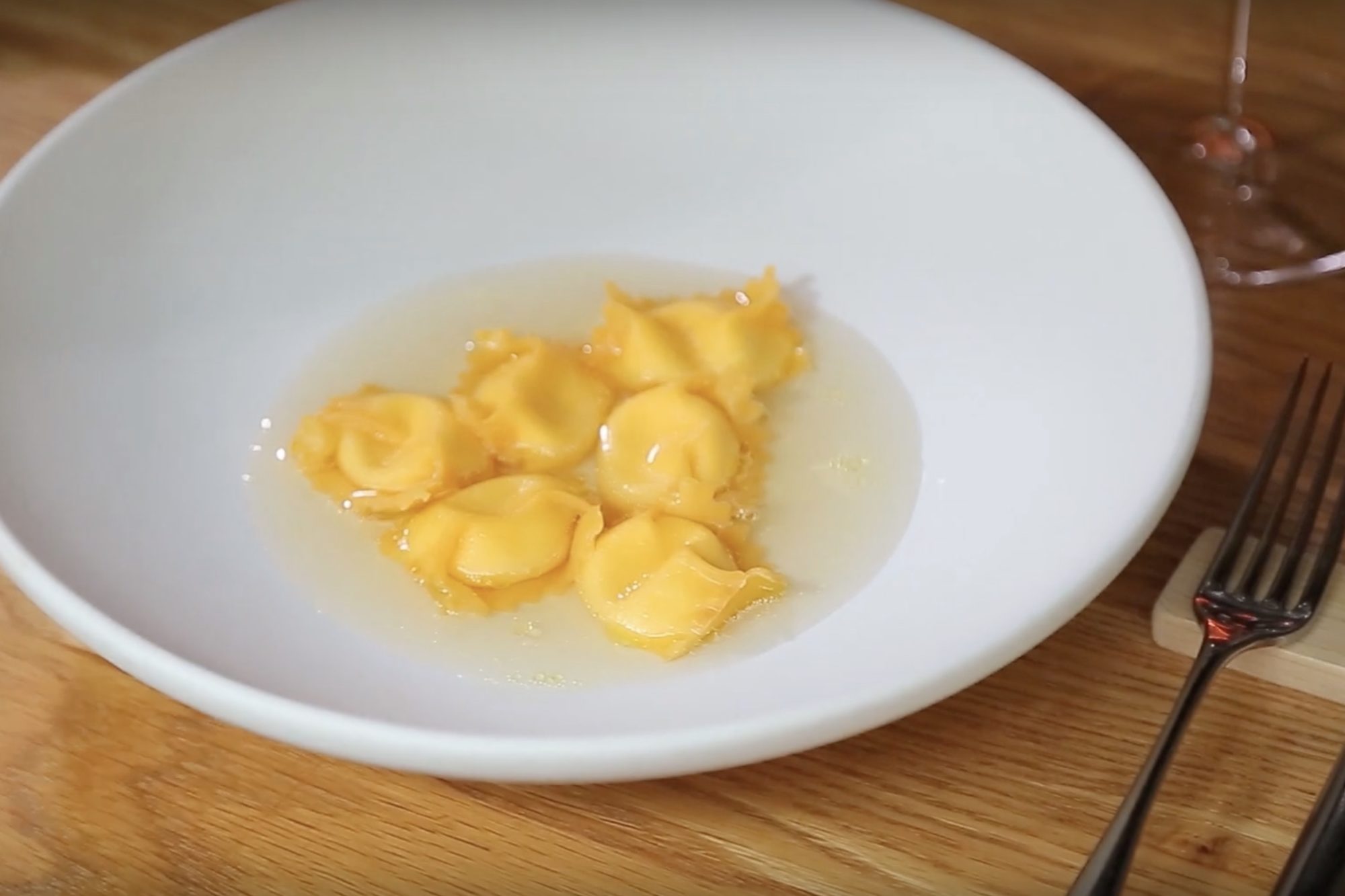 Nakamoto:
I’ll first mix the egg yolk and flour.
I use an egg called “Yoshida Egg” and I have it especially made for pasta.
When I’m kneading it, the stretch it produces is really different. It’s great.

For flour, I use the coarsely-textured semolina flour.
I have it ground in Japan. It comes out really fine and it’s great for making pasta.

Rather than mixing the dough with my fingertips, I’m actually rubbing them together.
I let air in but ensure not to activate the gluten too much.
If you knead it until its smooth, I think it puts stress on the dough. I try not to put in too much strength when I knead it and also let the dough rest for a couple of days to take off the stress.

Nakamoto:
It’s gaining popularity recently. They have it imported from Japan.

I’m slicing the ham.
I’m using boneless, non-pressed ham.
It’s been aged for 24 months and has a rich aroma.

I put it into the pot, add the kelp and water. Heating it from the center, I put it over a flame right until boiling point.

Q:Do you use the ham just to make soup stock?

Nakamoto:
Yes.
I’ve tried experimenting with it in dishes in the past, but once I’ve extracted the broth from it, the ham can’t be put to any use.
Although it is kind of an extravagant way of using raw ham, the soup made from it tastes much better than if it was made just from bones.
I’m going to prepare the pasta while the soup stock is being made.

Nakamoto:
I’m going to make the cheese that’s going to go inside the pasta.
Putting the milk over a low flame, I add citric acid and salt. Once it starts to harden, I filter it and use the lumpy parts.
Liquid whey is acidic and can be used to make dressing as well.
I’m adding mascarpone cheese to the ricotta cheese (cottage cheese) I made from the milk.

Next, I’m going to be stretching the pasta dough.
If I thin it out all at once, it might develop holes, so I’m going to do it a few times.
Since I’ll be putting cheese inside, I have to ensure that it’s not thin enough to tear.
After putting the cheese in the mixer, I take it out, wrap it with the dough and shape it.

Nakamoto:
Right.
With this shape, the sauce seeps into the gaps, giving the dish a sense of totality.

After cutting out the pasta, I let it lay in a wooden container dusted with flour. I tried a variety of methods, but this one was the best.
Plastic containers tend to collect moisture. Using a wooden container and some flour helps adjust the moisture and gives great results.