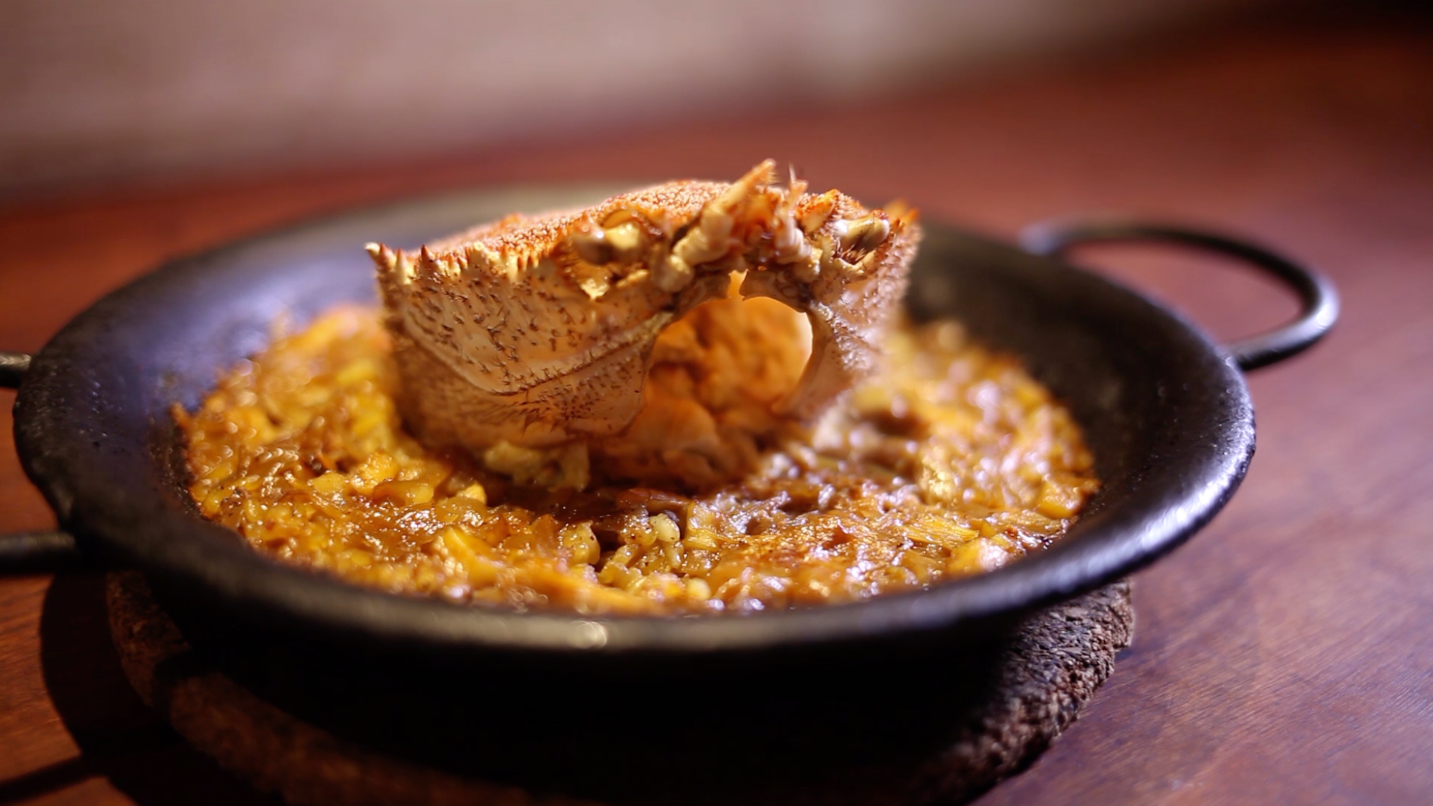 Q: What kind of ingredients are suitable for putting into a paella?

Chef Azuma:
The things that I choose are fragrant and meaty, and I take into account the quality of the meat, the size, and whether or not it’s something that will suit the Japanese palate. Crustaceans suit paella very well, so I use them all year round.
Depending on the season, I will use things like snow crab, female snow crab from Kyoto, horsehair crab, and blue crab.

I make around 12-13 kinds of paella throughout the year, featuring things like eel, rosy seabass, conger eel, and Pacific saury.

What inspired me to make paella with rich, oily fish was trying a sardine and squid paella when I was in Spain. It was so simple, and yet so delicious. It made me realize just what is possible in paella.
Up until then, I had made more ordinary varieties of paella, containing ingredients such as squid, shrimp, clams, and mussels.

Paellas made with rabbit or chicken are also standard in Spain.

I decided to make paella focused on Japanese ingredients, as opposed to those ones commonly found in Spain, thinking it would expand the culinary possibilities.
Furthermore, when making paellas with mussels and shrimp, it tends to be cooked through thoroughly, so by the time you come to eat it, the ingredients have dried out, and you no longer get the taste of their inherent flavor. That’s another reason why I changed the ingredients that I use.

On the contrary, I was surprised at the sardine and squid paella I ate in Spain, here was a paella which had so much flavor. The fragrant squid and the sardines’ distinctive flavor had firmly permeated through the rice, and it was simply wonderful.

That motivated me to start making paellas in which the flavor of the fish really shines through.

Chef Azuma:
Yes, I always serve paella at the end of a meal.

Chef Azuma:
Yes, this horsehair crab is from Funka Bay (another name for Uchiura Bay) in Hokkaido. It’s always exciting to have such a great ingredient before you, but actually, I don’t really like handling seafood when it’s still moving! (He laughs)

This one is still quite small. A large one would weigh over a kilo. However, although the bigger ones look impressive, they become quite tasteless.

Q: Why do you chill the crab?

Chef Azuma:
Well, they originally come from a cold environment, so I feel it’s nice to give them somewhere cold to hang out; that’s the sort of kindness I show towards my ingredients (laughs). I mean, I say it as a joke, but I do think it’s best not to induce any stress in them that might affect the flavor.

It’s not like there is a correct way of doing things established for anything, including this. I take the stance of cooking whereby I consider how to do things as I go along, and then judge whether it was right or wrong by looking at the result.

Q: Can you tell us a bit more about the soup?

Chef Azuma:
This soup will be the base for the horsehair crab paella. Firstly, I remove all the meat, then I cook the shell in a vegetable bouillon.

The vegetable bouillon is made from carrots, onions, celery, and herbs (Italian parsley, etc.). To this, I add saffron, which is an essential ingredient in making paella. This is enough for around 10 people.

I cook it on a high heat. Adding water to it, I cook it until it reduces. By cooking it on a rolling boil, I believe it makes it easier to extract all of the crab’s flavor.

While this is true for crab, it’s not the case for fish. With fish, I turn the heat off as soon as it reaches boiling point, and with some ingredients I won’t let it come to the boil at all.

Since this will be the base, if this doesn’t taste nice, then the whole paella will taste bad.

Chef Azuma:
No, I don’t add anything. You get salt from the crab itself, and I don’t think it’s good to add an excessive amount of salt.

I don’t use salt as a seasoning in the food at aca 1°, rather, I will season dishes by adding salt content through the use of something like dry-cured ham or chorizo. The only time I use salt is when removing some of the moisture at the end.

By removing some of the moisture from fish that contains a lot of moisture, it firms up the texture, and brings out the flavor and umami. The same is true with sea urchins.

I will let it boil like this for about 20 minutes.
Once it has boiled a bit more, the flavor of the white wine will have mellowed.
Crustaceans and saffron form a perfect harmony.
When you come to make the paella, some of the moisture will evaporate, so the soup is just right when it has a flavor that seems slightly weaker than you’d usually make it.

Q: Do you adjust the recipe depending on the ingredients?

Chef Azuma:
Even individual crabs can vary in terms of things like saltiness and flavor. Some ingredients may be lacking in sweetness, or fragrance, or salt content.

Salt can be adjusted in the soup, but if you don’t check the fragrance and meat quality in advance, then it’s difficult to know in what direction to take that day’s soup. So I adjust the recipe by considering along the lines of “Oh, today’s crab has a delicate flavor, so I’ll have to bring the flavor out in the soup.”

Q: Tell us your process for making the paella.

Chef Azuma:
I use this paella pan. The name of the dish “paella” actually comes from the name of the large, shallow pan that it is cooked in.
First, I fry a paste of squid, scallops, and onion in the pan, to which I then add tomato sauce, the soup, and rice. Then the whole thing goes in the oven for 13 minutes, to evaporate off the excess moisture.

I fry spear squid and scallops thoroughly until they take on a good color. If you don’t cook them enough, you don’t get any depth to their flavor and aroma.

The truly delicious paellas are not yellow, but more a sort of charred brown color. You can achieve this by frying the ingredients to within an inch of burning.

Q: How have you come to know these sorts of things?

Chef Azuma:
The only way is to gain experience through trial and error. Anyone is able to make paella to a certain degree of success, but to make something truly special, that requires experience. The right amount to cook the ingredients is not just about the preparation, but also about finding the best timing that works for you.

…
……
Okay, next, I stir in these gently sauteed onions and fry it all together. Just before it starts to burn, I add the tomatoes.

You basically imagine that you’re mixing together the ingredients, a little light charring, and the tomatoes, in order to make a tomato sauce.
At this point, we finish off the soup base, but it’s too early to add the soup yet. First, we have to remove the excess moisture from the tomatoes.

…
……
Now we add the soup from earlier. Then, I cook it on a high heat and wait until it boils.
If you take too long frying the squid and scallops, then they’ll dry out, which is not good. Now add the rice, and bring it to the boil before putting it in the oven.

It’s ready. Now I will steam it for 2 minutes.

Chef Azuma:
What I just put on to finish it off is aioli, which is similar to mayonnaise, with a strong garlic flavor. In Spain it used to garnish paella.

At aca 1°, I use a homemade aioli, to which I add crushed Japanese pepper.

Q: Is there anything that you are particular about when plating the dish?

Chef Azuma:
Usually, the whole pan is brought out to the table as is, and in Spain, the paella is then dished out to customers by the chef or a server.

That idea of the chef dishing out the food they have made, and thereby taking responsibility to the very end, makes sense to me, and I think it’s a great idea.

Perhaps it would be difficult to do in a bigger restaurant, but in a restaurant this size, I do it in order to for my customers to have a good time.