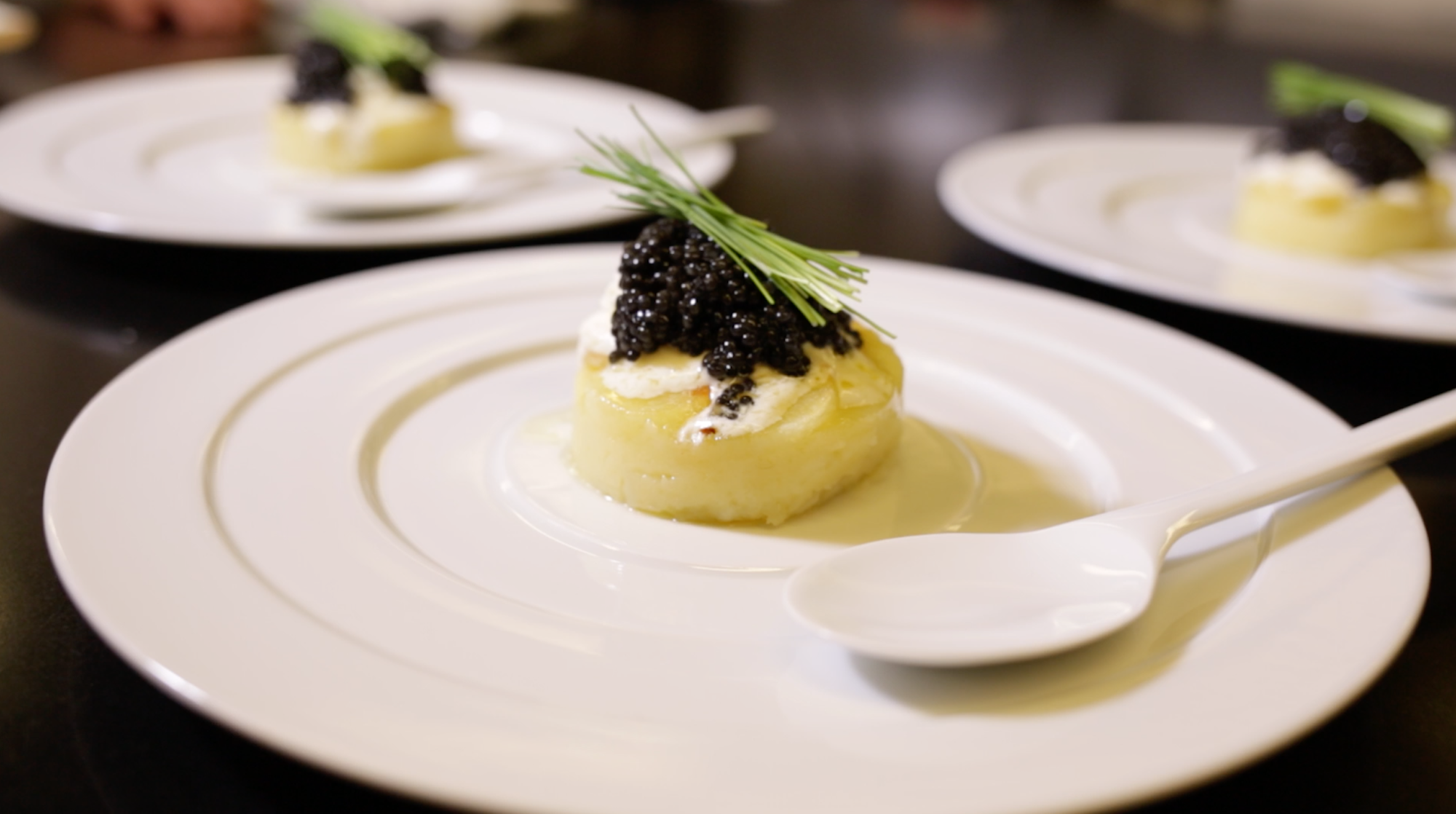 Vol.1：Frying the May Queen Potatoes

This recipe was devised so that the fine ingredient used in this dish, caviar, could be enjoyed in the best way possible. Rather than playing a supporting role, the caviar is the star of this dish. It is one of the restaurants specialties, with over 20,000 served annually.

First, thinly sliced potatoes are heated in clarified butter (it is the top layer obtained from melting butter in hot water). Ensuring to avoid heating it at a high temperature, it’s set to simmer.

I’ll start doing another step while the potatoes are getting heated.

Vol.2：Pureeing the May Queen Potatoes

I’ll start preparing the potato puree.
I tried using different potatoes before, but… May Queens are delicious (laughs)

The potatoes are steamed beforehand to get rid of a bit of the moisture. I’ll peel them and start mashing them up. Then I’ll add some butter and lightly mix in some salt.

The sliced potatoes simmered in butter just before are then placed on top of this potato puree.

I apply butter and bake them. To ensure that the surface of the potatoes don’t dry up, I apply butter several times while baking them.
While there are many potato dishes in Italy, there are no dishes like this where the potatoes are the focal point. There are two main categories of Italian cuisine: cucina povera and cucina ricca.

Cucina ricca is extremely lavish food, whereas cucina povera refers to “poor food”, basically for the common people.
Pasta was originally devised as a dish that uses very little sauce. Now, most of the dishes that are enjoyed in Italy are cucina povera.

While the concept of this dish is on the “povera” side, using fine ingredients like caviar also makes it a “ricca” dish. It’s the most luxurious cucina povera in the world! (laughs)
I think having these two elements in one dish, makes it extremely Italian.

The cream is made by mixing fermented butter, fromage blanc (white cheese), mascarpone and fresh cream.
I try to avoid mixing it too much so that the ingredients don’t start breaking down.

Later, I’ll arrange the dish by placing this cream and caviar on the baked potatoes.

The idea for this dish goes back to the time I was apprenticing in Italy 30 years ago.
There was a dish called cool cappellini in a restaurant that was presenting creative dishes, dubbed “new Italian cuisine”. Using that as an inspiration, I created a dish made with eggplants and caviar. Even though it became popular, I wanted to make something that drew out the flavor of caviar even more distinctly. So, I used potatoes as a base and that is how I arrived at this dish.
I’ve been serving this dish for 27 or 28 years. During that time, I’ve been improving it little by little to make this dish what it is now.
The combination with the cream is actually something I came up with recently.

Once the potatoes are ready, I’ll go ahead and place a portion on a plate, and put cream and caviar on top of it.
Because it’s a dish focusing on caviar, I won’t be stingy. I’ll add an ample amount. Finally, the dish is garnished with green onion sprouts and it’s complete.
In the past, I used chives as a garnish, but they were difficult to chew on, so I decided to change to green onion sprouts. (laughs)

Also, this is a special spoon for the dish. I had it made just for this dish. Have a taste.