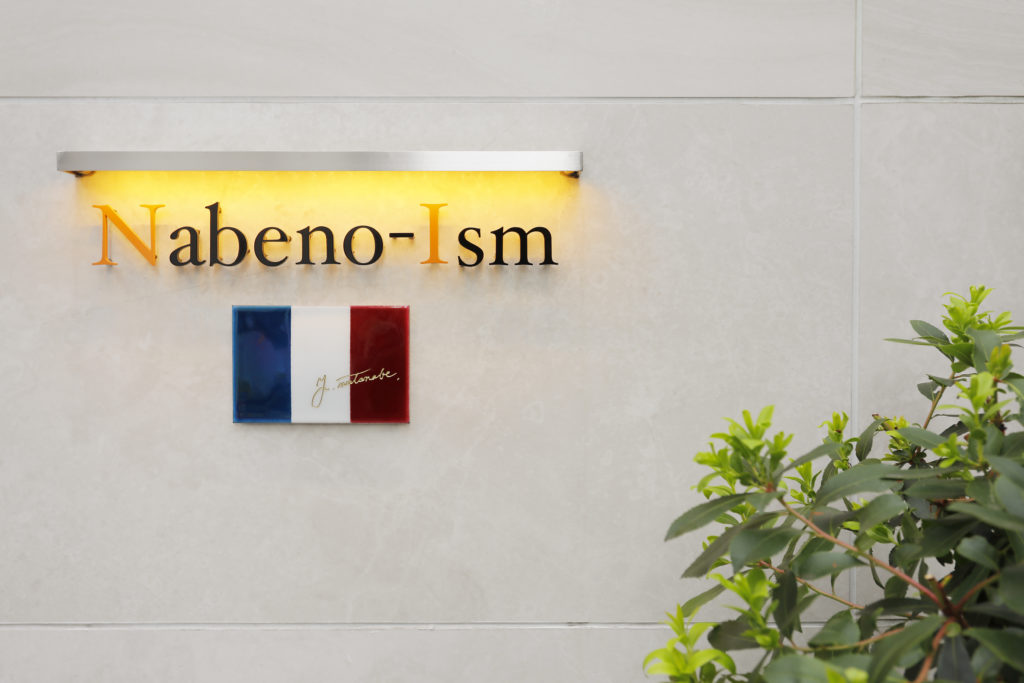 Pushed onward by the master, his independence in the 21st year

In deciding to quit the restaurant you had been at for 21 years, did you reach some kind of internal milestone?

Before my 50th year, I thought that I wanted to pass the baton of Mr. Robuchon’s restaurant to the next generation. Also, when I thought about striking out on my own, there was the thought that it would be difficult to do after 50. So when I was 48 I made a resolution, and I informed Mr. Robuchon that I wanted to take on a new challenge.
I think that even Mr. Robuchon was feeling that I would come to him with this kind of talk some day.
Then again, I had actually planned to quit working for Mr. Robuchon after ten years. However, I had a talk with Mr. Robuchon and I made up my mind to stay on at the Ebisu Chateau.
I think that it was precisely because he knew this that, when I got the three stars, Mr. Robuchon gave an unforgettable speech in the kitchen:
“Maybe Watanabe would have been able to get stars for his own restaurant. But he stayed on at the Chateau and continued to cook, and this time he has managed to earn three stars. I am truly grateful.” I shed tears at that time.

Since then 10 years passed, and this time for sure I had really made up my mind to tell him that I wanted to quit and strike out on my own, but Mr. Robuchon just wouldn’t give me a chance to talk to him. On Monday I said “I have something to talk to you about,” but he said “I’m busy now. Let’s talk later,” and took no notice of me. But I saw that he did not appear busy at all (laughs). He was just playing on his phone and engaging in small talk with the other chefs. Mr. Robuchon knew what I was going to say. He wouldn’t talk to me Tuesday, or on Wednesday either.
Anyway, it was Friday, the morning of the gala dinner. Mr. Robuchon greeted the staff one by one, things like “How’s is your family?” During that time, he called me alone over to the bar. “Tell me everything,” he said.
I talked about everything: my thoughts, my plans for an independent place and for funding, the concept of my restaurant. Mr. Robuchon heard me out, nodding at everything.
After I he had finished listening, first he gave me a big slap! and then he said “Bravo!”
He hugged me and said “You’ve done well. Thank you so much for the last 21 years.” My tears would not stop.
I was overwhelmed with emotion at that point, but then Mr. Robuchon asked me with a serious face, “by the way, how many cooks are you going to take with you?”

Did you talk honestly about how many people you were going to take with you?
Mr. Watanabe:
Yes. I honestly told him that three people—Koji Okabe, who was deputy head chef and who had supported me since my time at Cafe France (he is now head chef at “Nabeno-Ism”), the young chef Hiro’o Tajima, and the pastry chef Yuji Miyawaki—would be transferring with me, which made four people including me. We were companions who had shared joys and sorrows together.

When I said this, he slapped me again! Then he said, “Bravo! If you were a stupid fellow nobody would go with you. Make the people you are taking with you happy. The Chateau will be fine, so just go and do your best!” With that, he sent me off with a great feeling.
He really is an incredible person. He knows better than anyone that it is not possible to cook by yourself. He is a real cook. 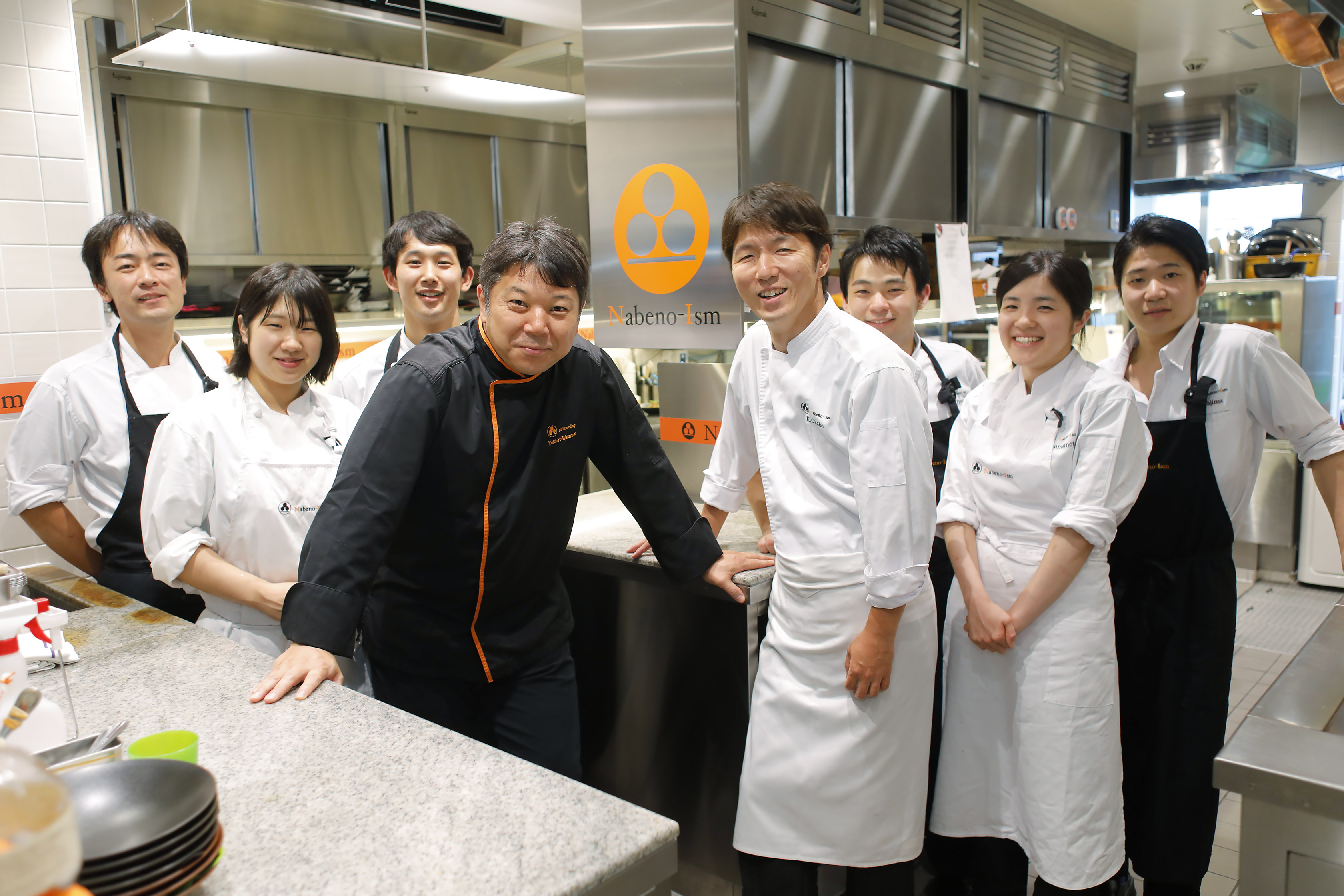 The launch of “Nabeno-Ism,” and his unshaken love of French cuisine

I really feel the strong bond between you and Mr. Robuchon… Anyway, you finally decided to go independent, but what kind of things did you place importance on when you founded “Nabeno-Ism”?

Mr. Watanabe:
The making of the concept. Making a restaurant is determined by making a concept. That’s a hint I got from talking to Mr. Robuchon.

“Pay attention to the color of the restaurant.” That’s a wordless message I got from him. First, I decided on white, black, and orange as the three concept colors. Orange is the color of the sun and of flames. You could say that it’s the source of human life and also the origin of cooking, so it’s a color I really love. White takes on the color of anything, which expresses the style of my cooking, and black on the contrary cannot take on any color, which represents the principle of my cooking.

Your restaurant’s name, “Nabeno-ism,” has a lot of impact, doesn’t it.

Mr. Watanabe:
I like the word “ism.” I think it is a powerful word, which can crisply show a spiritual direction. Therefore, from “‘Watanabe’ and ‘ism'” I made “Nabeno-Ism.”
Additionally, if you hide the “N” it becomes “abeno-Ism.” This means that my starting point, the “holy ground” of Tsuji Culinary Institute in Osaka Abeno is included.
I’m often asked if I had a copywriter help, but the restaurant’s name, the logo, I thought up everything myself. For the logo, I have been allowed to use the family crest of the Watanabe family. 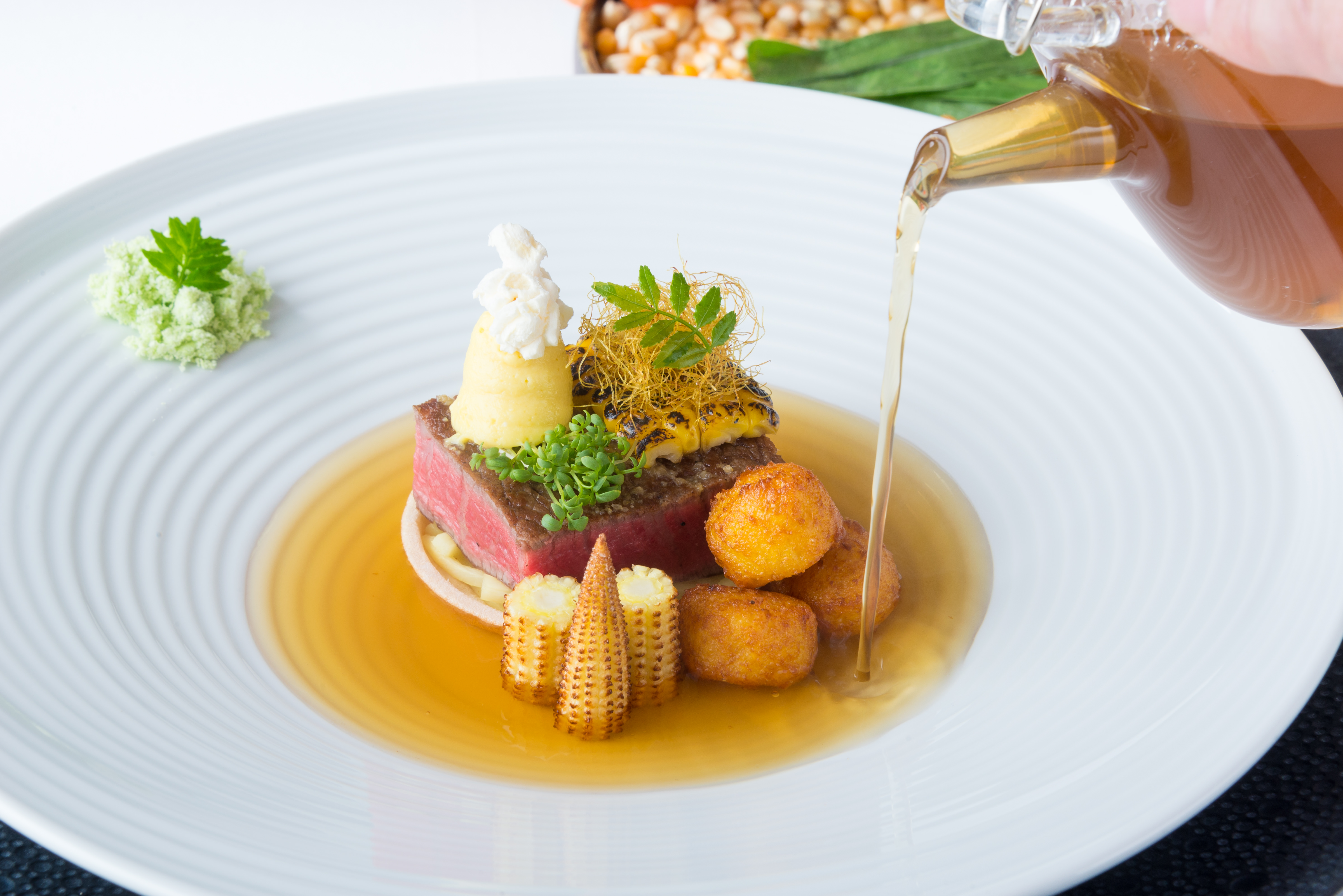 That’s the family crest! Were you originally thinking about a cuisine that was not only so-called traditional French, but also included the atmosphere of Edo and Asakusa?

Mr. Watanabe:
I think that cooking is a thing that should be rooted in the land. Therefore, my style is to use the things that are here. Afterwards it’s really about replacements, replacing a thing that’s in French cooking with something that’s here.

However, the thing that’s in my roots, after all, is French cuisine. If we start to get blurry about doing French cuisine, it seems like everything will end up becoming unsteady, so I always take France as the model. I have decided to continue to learn from France, and I place a lot of importance on this.

Therefore, the category of my restaurant in the Michelin guide is not “Innovative” but rather “French.” The reason I fly the French flag here is also because I want to express my feeling of continuing lifelong gratitude to France.

Someone who ate my cooking once said that “this tastes like it was made by a French person.” For me, that is the highest praise. 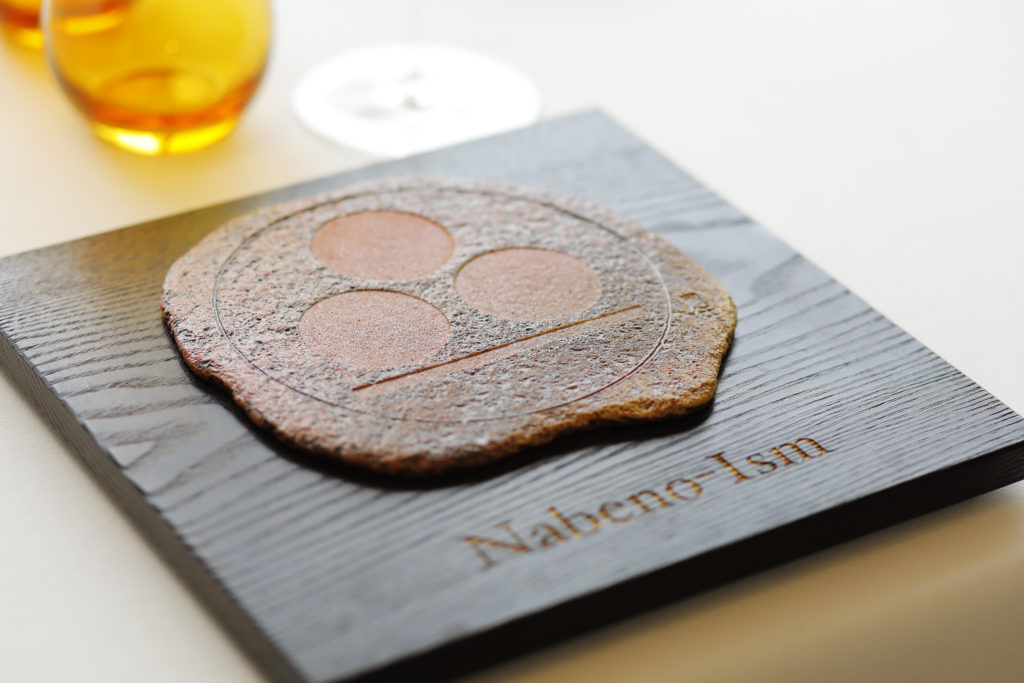 Please tell me about your dreams and goals for the future.

Mr. Watanabe:
Of course, I want “Nabeno-Ism” to continue to evolve and advance. And I want to aim for a further leap.

Finally, I’d like to ask you to give a message for young chefs and for people aiming to become chefs in the future.

Mr. Watanabe:
This is also Robuchon’s way of thinking, but you cannot cook by yourself. That’s why I think that it is important to never forget to have respect and gratitude for all the people, ingredients, tools, and things that you deal with.
Accomplish your original intention. The life of a great cook is the stacking up of plates one day at a time. Please continue to work hard, without giving up, for your customers and for yourself. 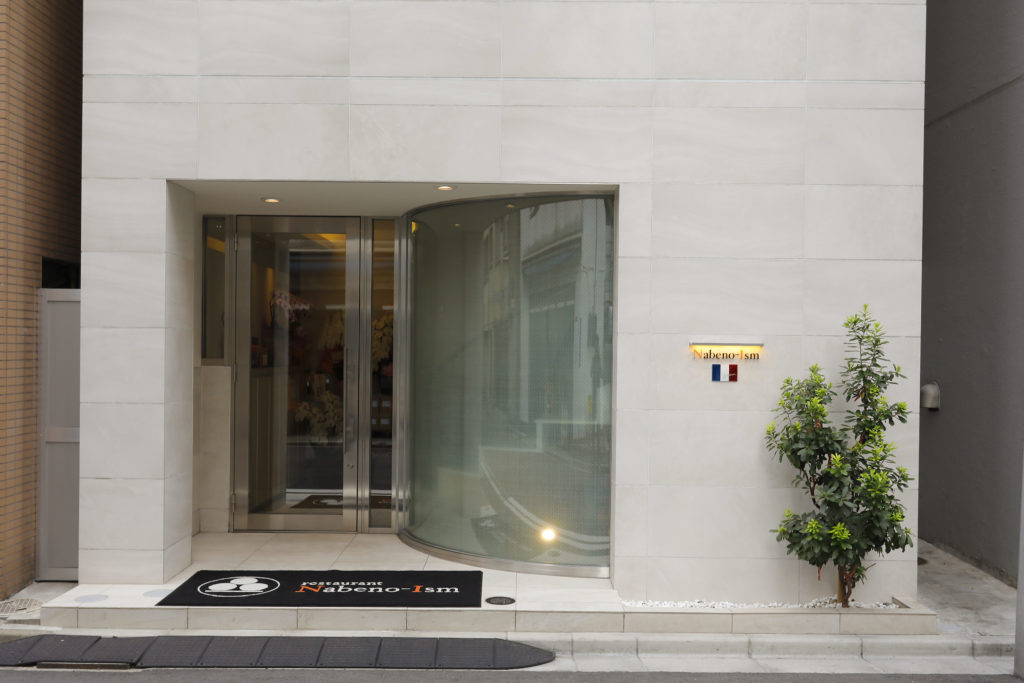 What gave me the biggest impression from the interview as a whole was Mr. Watanabe's thoroughly modest attitude, the importance he placed on relationships, and his personality that did not forget gratitude.
As I listened to Mr. Watanabe's stories, overflowing with warm episodes involving the people around him, I felt tears well up in my eyes again and again: the story of him begging his father to let him attend cooking school; the phone call from his strict senior chef when he got the star; the tears he shed with his brothers in arms as they fought together under pressure; his conversation with Mr. Robuchon when he told him he was quitting the restaurant. Surely the reason Mr. Watanabe's cooking is able to touch people's hearts is because it's made by a person with such a wonderful personality.
It's a story from a later date, but ten days after our interview, Mr. Joël Robuchon, who Mr. Watanabe had supported continually for many years, died at the age of 73. Mr. Watanabe attended the funeral. Whether it was by fate or by coincidence, Mr. Robuchon died the day after a dinner reservation that Mr. Watanabe and he had made three months previously, for L'Atelier on the Champs-Élysées...
Mr. Watanabe was one of the people who supported Mr. Robuchon the deepest and the longest, for over twenty years. Even as Mr. Watanabe helped realize the world drawn by a master, I wonder what kind of world will be drawn in Mr. Watanabe's restaurant "Nabeno-Ism," which burst forth from there.
Prev Page
Next Page 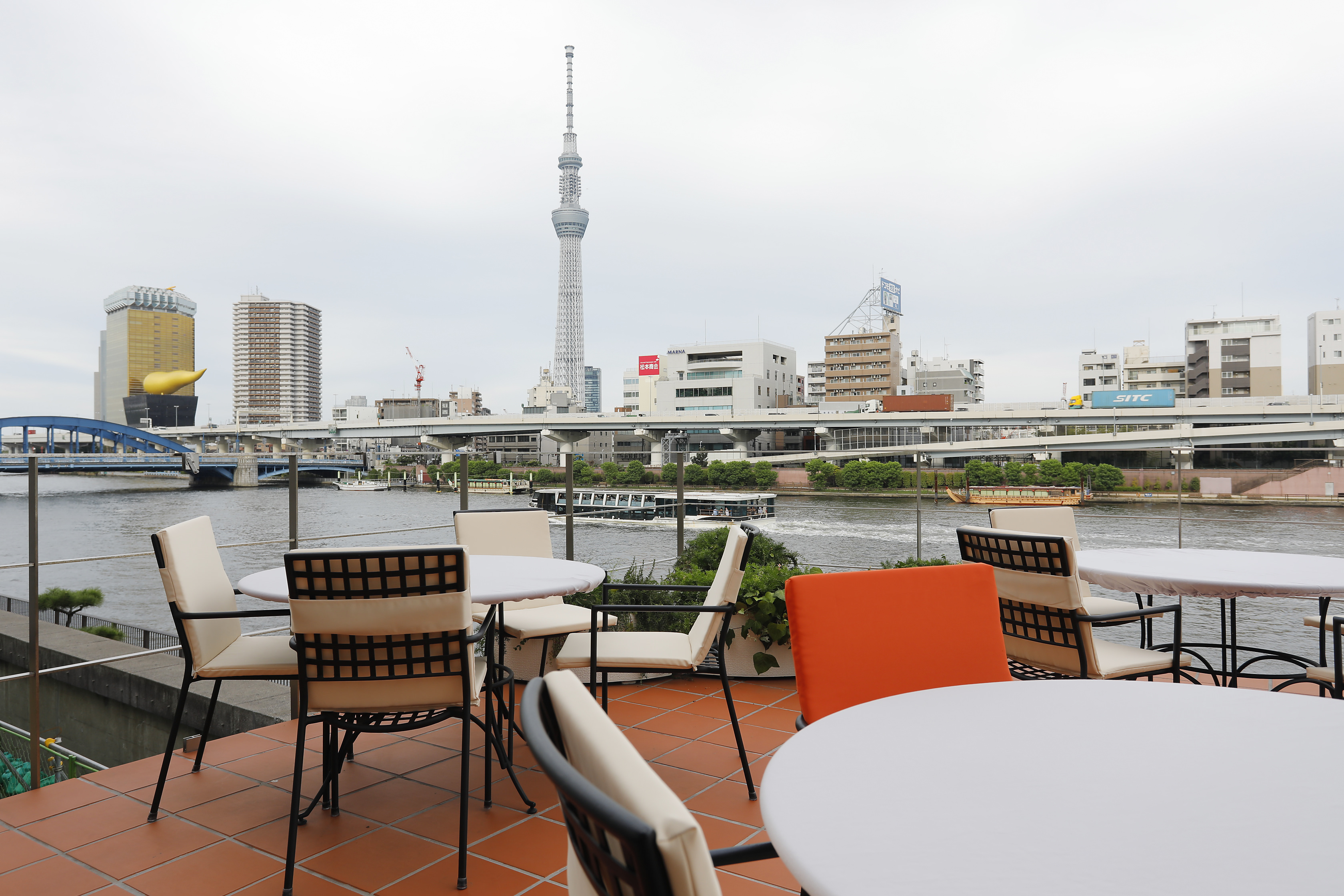