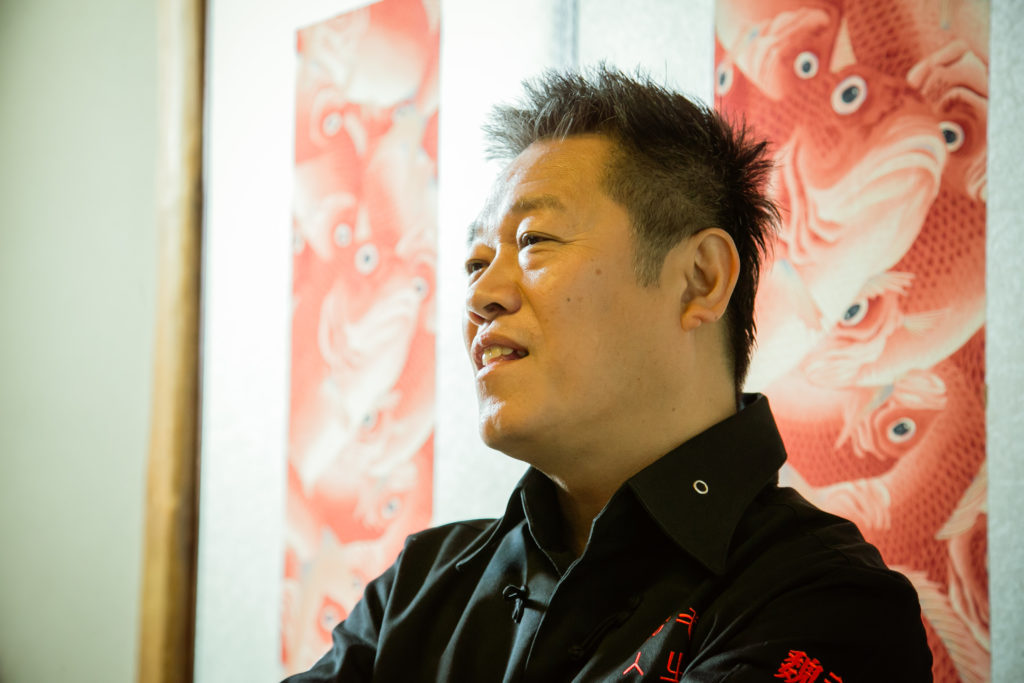 “There is no need for two bosses.” Leaving his father and moving to Okinawa to open my own restaurant.

When you were acknowledged like that, wasn’t it hard to leave?

Mr. Gi:
Yes. The owner of Manchinro asked me to be his adopted child. I got permission from my father and it was in process, but I was told to help at home for a while to expand the building of my father’s restaurant. So I promised the owner I’d be back, and went home once more.

But I became unable to go back. I wanted to make my family’s place famous, so we took an offer with a TV program and I collaborated with my father. We had more appearances in various media.

My father had great skills so things gradually got better and better. I contacted the owner and apologized, telling him I couldn’t return.

But I had a brother and…. China, just like Japan long ago, values the eldest son the most. Compared to the eldest son, the second son is like a weed. Compared to my brother who was raised with care, however, I thought my upbringing would mean the business would go better under my direction.

But even if I became the boss, I wondered if my brother would follow me. That was a tough issue.
And then my mother told me one thing “There is no need for two bosses.”

It was after I gave everything I had, so I thought I had to give up. I decided to quit working at my family’s place and start business in Okinawa, which I had been considering.

I liked Okinawa a lot and went there many times, but the Chinese food in Okinawa was not that good, so I was thinking of running a restaurant on my own, with better food.

I was getting a fresh start and decided to go to Okinawa and try my hand at this business.

So the first restaurant that you started on your own was in Okinawa.

Mr. Gi:
Yes. But it did not go smoothly. Back then, to Okinawa, the mainland was considered a foreign country. My mortgage here was useless, and I was unable to borrow opening capital.

“We will see how you work and consider it,” they said, and so I worked as a part-timer for a year.

I had told my employees that I would arrange accommodations and brought them so I could not go back. I worked at a Chinese restaurant in the afternoon and at a nightclub at night, with no sleep.

But I could not see the end. And on the day that I was about to give up, thinking about going back, I received a call saying, “You worked hard for a year. We will lend you money.”

I heard later that it was the first time to finance using a mainland mortgage as collateral.

You were finally able to open the restaurant. How was it received?

Mr. Gi:
From the first day, we were doing roaring business with consecutive full houses.

I was known well from that one year of preparation, and moreover it was the first genuine Chinese cuisine that Okinawa ever had, so it became very popular. We did business for about two years, actually. But then I got swindled. We were forced to retreat, 100 million yen in debt.

My father told me to come back and that he would pay the debt, but I had difficulty working under my brother, and debated if it was a good idea to be on the payroll. But then there was a customer who came from Kyoto and  asked me to produce the restaurant he was opening in Kyoto.

A fateful meeting with Kyoto. And after that you started the restaurant you are in now?

Mr. Gi:
The restaurant I helped produce did well and I was there one year.

When I was thinking about going back to Yokohama, I was introduced to a property that was a teahouse. It was a prestigious one that was said to be where Ogai Mori wrote his novels.

It was also well known that the owner would never sell it, even for a good price.

There was no idea of “inventive” Chinese served in a traditional town house back then, and it had a playful and interesting appeal. I thought: let’s do it. I turned in my resume and gained his trust and signed a contract under the condition that it would be used without rebuilding the structure.

I thus opened Ichino Funairi on this spot that faces the Takasegawa River. 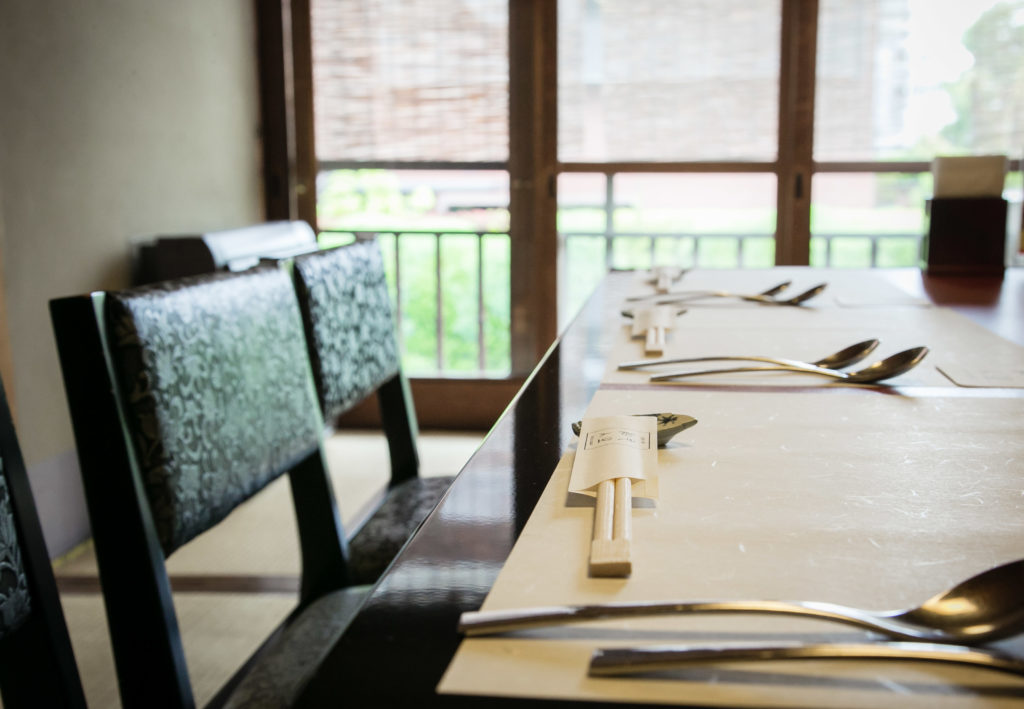 Complete denial from the landlady of the teahouse. Difficulties to be acknowledged in Kyoto, and a first failure.

Compared to other cities, I think there are a lot of people in Kyoto who value the local traditions.Since you served Chinese food, was there any backlash towards foreign food?

Mr. Gi:
There absolutely was, and it was my first failure as a chef, and also the start of it all.

It was a prestigious building, so naturally the teahouse landladies visited us. And six months after the opening I was able to join a meeting where they all gathered.

But I was told by one lady:

“Your food might be delicious. But it won’t pass if it’s the same as that in Chinatown. Who in Kyoto do you think will eat food full of spices? Mr. Gi, you have to study Japanese cuisine more.”

It was right when I thought everything started coming together, but I sunk all the way to the bottom by being denied like that. I thought questioned my career as a chef, something I had always been proud of.

For the first time, I wanted to quit being a chef.

I see. How did you bounce back?

Mr. Gi:
When I was feeling down, my wife, who is also the landlady of my current restaurant, told me, “Well, you understand ‘move’ but do not understand ‘still.’” Actually, it made me realize that I was always moving forward but never had time to look back.

Then I started visiting temples, and I had previously done kado (Japanese flower arrangements) so I started that again. When I was sitting inside a temple, I felt calm and I was able to see many things clearly. It changed the way I communicated with others and received things.

What I noticed was that chefs in the Kanto area use lots of seasonings so the flavor is strong, but the dashi (Japanese soup stock made from fish and kelp) is weak. On the other hand, chefs in Kyoto produce seemingly weak dishes, but the dashi is evident for sure. After finding that out I started studying dashi. I wondered why dashi is so tasty, and I found out that it is because of the water.

The well water and spring water in Kyoto is a mild soft water that pulls out the sweetness of dashi.

I went to pick up spring water at various places in Kyoto and made soup and cooked paitan broth. Water was definitely the “still” that I was missing. Starting then, Kyoto had access to Chinese food that suited the city.

Being denied by that teahouse landlady became a turning point.

Gi:
My current food would not exist without that event. The lady from back then is much older, but she still visits using a cane. When she came five years ago, she said, “There are no more thorns. It has changed.” She came a few days ago and said, “Your food is the most delicious” for the first time. I was very, very happy to hear that. My wife was so relieved when she heard that. 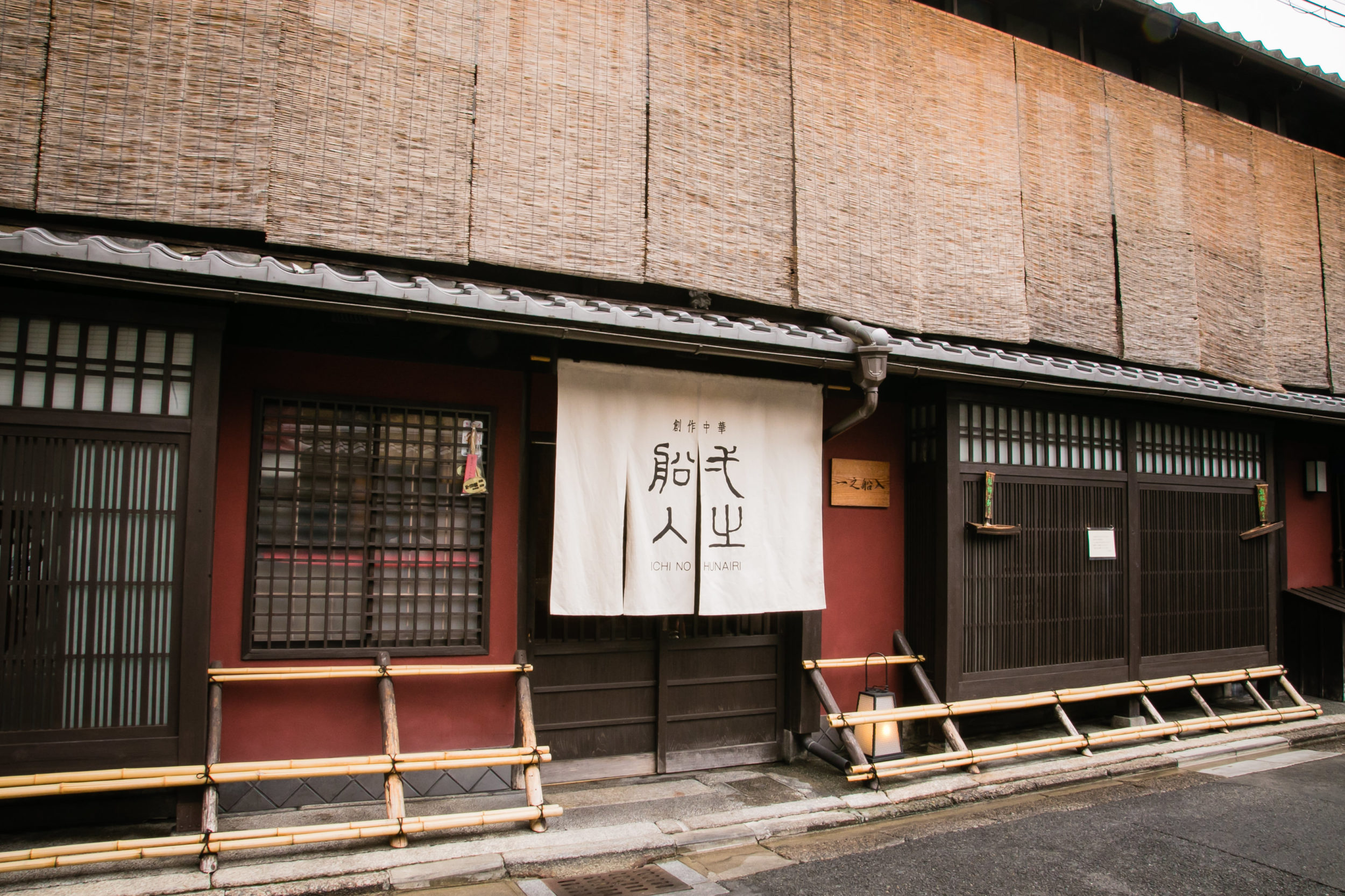