Hyotei keeps the dignity and stately attitude of a long-established restaurant when there are many old and exclusive restaurants that can't avoid being affiliated with foreign investment capital and large enterprises. Hyotei has a 450-year history and earned three Michelin stars in seven consecutive years. In March 2018, a Tokyo branch was opened. A traditional Kaiseki cuisine that you can enjoy in the garden, as well as Hyotei's famous egg dishes and morning rice porridge, have been passed down to the third and fourth generations and have been loved by many people. The number of foreign customers by word of mouth has been growing. I interviewed Mr. Yoshihiro Takahashi, the 15th generation successor, about the mindset that is important to protecting such a long history and the idea of the cultivation of his staff of various ages. 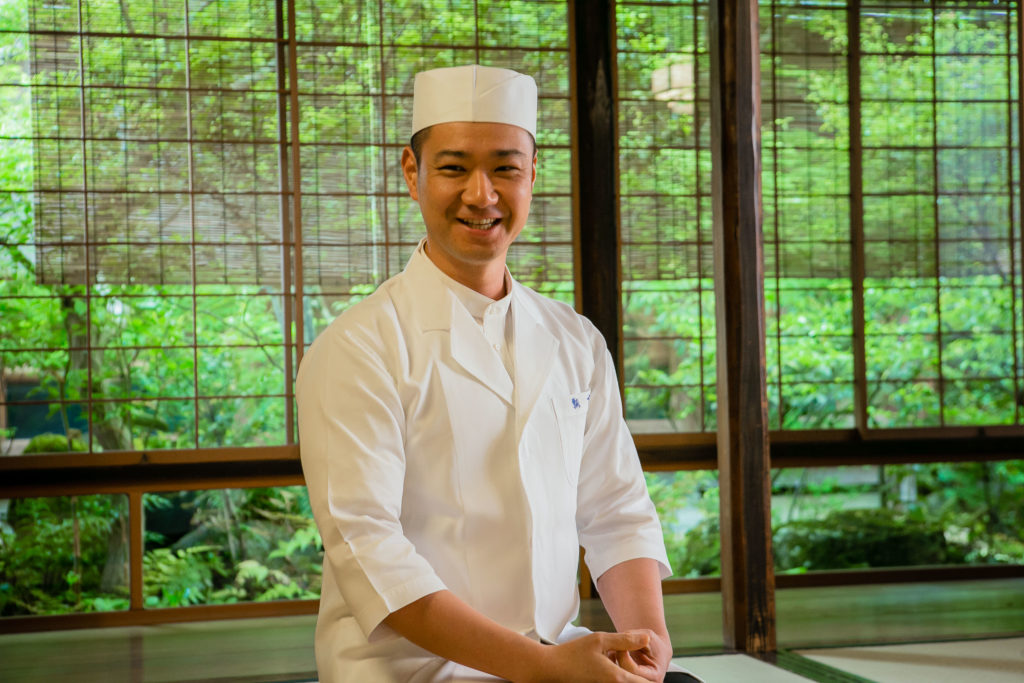 His childhood, when he naturally accepted the path to becoming a chef.

You inherited, as the 15th generation, a long-established restaurant that has 450 years of history. Did you really think about becoming a chef ever since you were a child?

Mr. Takahashi :
I wasn’t really conscious of becoming a chef but the restaurant was where I always played around when I was a kid. I went to see carp in the pond in the garden and fell into it! There was always a tense atmosphere in the kitchen and I wasn’t really comfortable going there. My father used to sleep in the restaurant so both the restaurant and the house were my place to live, so I just naturally thought I would probably be a chef before even thinking about inheriting the restaurant or anything. Therefore, I wrote my dream in an essay when I was in third or fourth grade, saying “I will be a chef in the future.” It seemed I had a strong will already.

When did you start cooking?

Mr. Takahashi :
I sometimes helped my parents clean the leaves or wrap sasamaki-zushi but that was it.
However, I sometimes cooked fried eggs with my sister when we were hungry, because my parents always worked so late. Scallop shells were used instead of a frying pan, and we added soy sauce to it. Scraping down the bottom of the shell makes it very tasty. I guess I had already realized the fun of cooking.
When I was a child, I was very picky about food, and I didn’t like raw fish and meat. I only liked soft-boiled eggs and cold rice porridge, which were not served to customers.
I have always loved eggs since then – that hasn’t changed.

Were you the one who decided to go on to college?

Mr. Takahashi :
Yes. The biggest reason was that I wanted to get away from Kyoto for once. When I was in Kyoto, people who knew about Hyotei would talk to me – it happened a lot.
I wanted to live in a place that had no relation with my parents’ home.
Also, I wanted to know the local food of different places away from Kyoto.
I wanted to live alone, too, so I took exams to enter universities in the Tokyo area, and went on to a college in Tokyo. I wanted to study something other than cooking, so I majored in business economy. 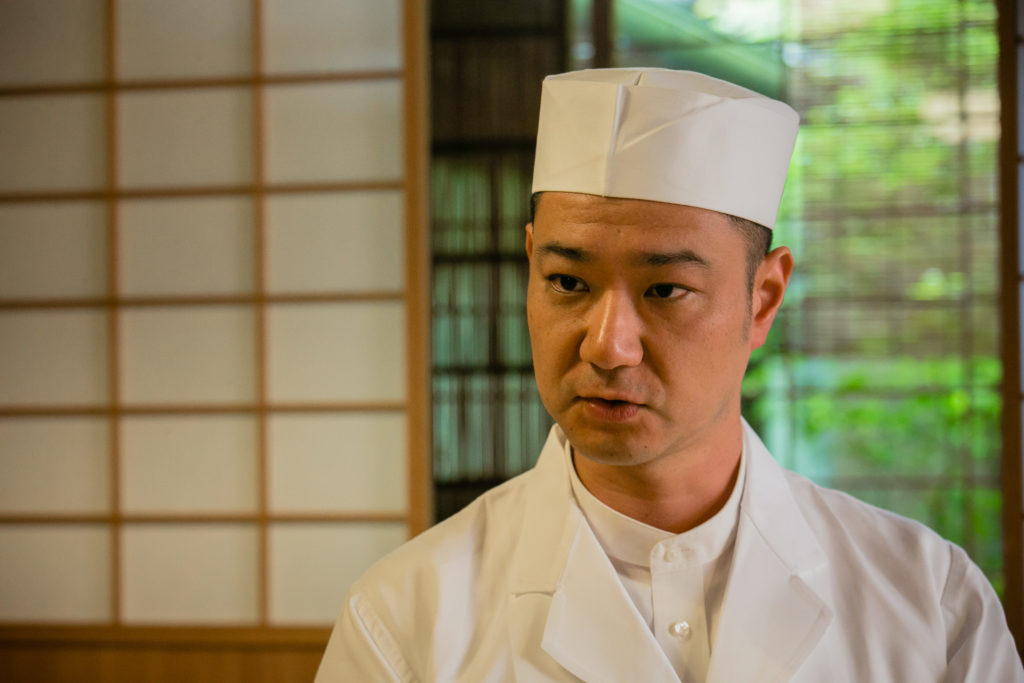 His everyday life leaves no time for concerns – only to continue polishing his skills.

What did you do during apprenticeship after graduating from college?

Mr. Takahashi :
My father recommended a Japanese restaurant called Kaiseki Tsurusachi in Kanazawa and I started apprenticeship training there.
I sent my futon mat in advance and put a new Japanese cooking knife in a Boston bag. I started working as soon as I arrived there.
It was after midnight when I finished work. I was supposed to start working at four the next morning so I came in the kitchen at 3:30 a.m.
I was concerned that I would not be able to sleep but my senior in the same room said I fell asleep as soon as I got into the futon.
Yasuo Koda, who is the son of Mr. Saburo Koda, the founder of Tsuruko, is now the head of the restaurant, but this was when Mr. Saburo was still the head.
It was the catering business heyday so I had a night shift a couple of times a year and it was such a busy restaurant.

It was around the time when his son Yasuo appeared on the TV show “Iron Chef.”

Mr. Takahashi :
Yes that’s right. It was so crazy that I had no time to take a breath. I hear some young people nowadays have difficulty sleeping because they are concerned too much. For me, life was too hectic to be concerned about anything. I was physically extremely tired so I felt each day pass by in a flash. I only tried to get myself to remember the skills until it became automatic every day.

Didn’t you feel lost or feel any experience gap, starting without full-fledged experience as a chef after graduating from college?

Mr. Takahashi :
At first, I didn’t understand anything and couldn’t even remember peoples’ names. No one takes notes because it was in a time that people said “Remember the recipes and seasonings by your tongue.” I was told, “Do other things, if you have time to take notes” or “Don’t pause in your work,” so I secretly went to the bathroom to take notes and tried to remember them.
Even if there was much work, there was no rule or specific amount of work assigned so we all needed to balance our workload ourselves to handle everything. People thought I would be really good at cooking because I am a son of a Hyotei owner. Some people said, “Please mince these,” but it was my first time holding a Japanese knife. There are many different kinds of Japanese knives such as Yanagiba or Deba, and I had never used any of them so I couldn’t handle them well. After everybody went home, I sharpened knives and worked hard to practice and get experience until it all became automatic. On the other hand, I sometimes stayed late and was told to go home early.

I heard that you did your apprenticeship with the heirs of prestigious restaurants in various regions while at Tsurukou. They are actively working as excellent chefs.

Mr. Takahashi :
Yes. When it comes to people who are from Kyoto with whom I did my apprenticeship, there was Mr. Kenta Suhara,the second generation of Sushi Kappou Nakaichi, and Mr. Hisato Nakahigashi, the fourth generation of Miyamasou. My mentor (Saburo Koda) taught me so many things – not only cooking but other things, too. He was a tea ceremony professional so I learned a lot about the basics of tea tools and serving dishes. More importantly, he started his restaurant from scratch in a time when it was so hard for people to continue restaurants. I learned a lot from him, in terms of ways of thinking. 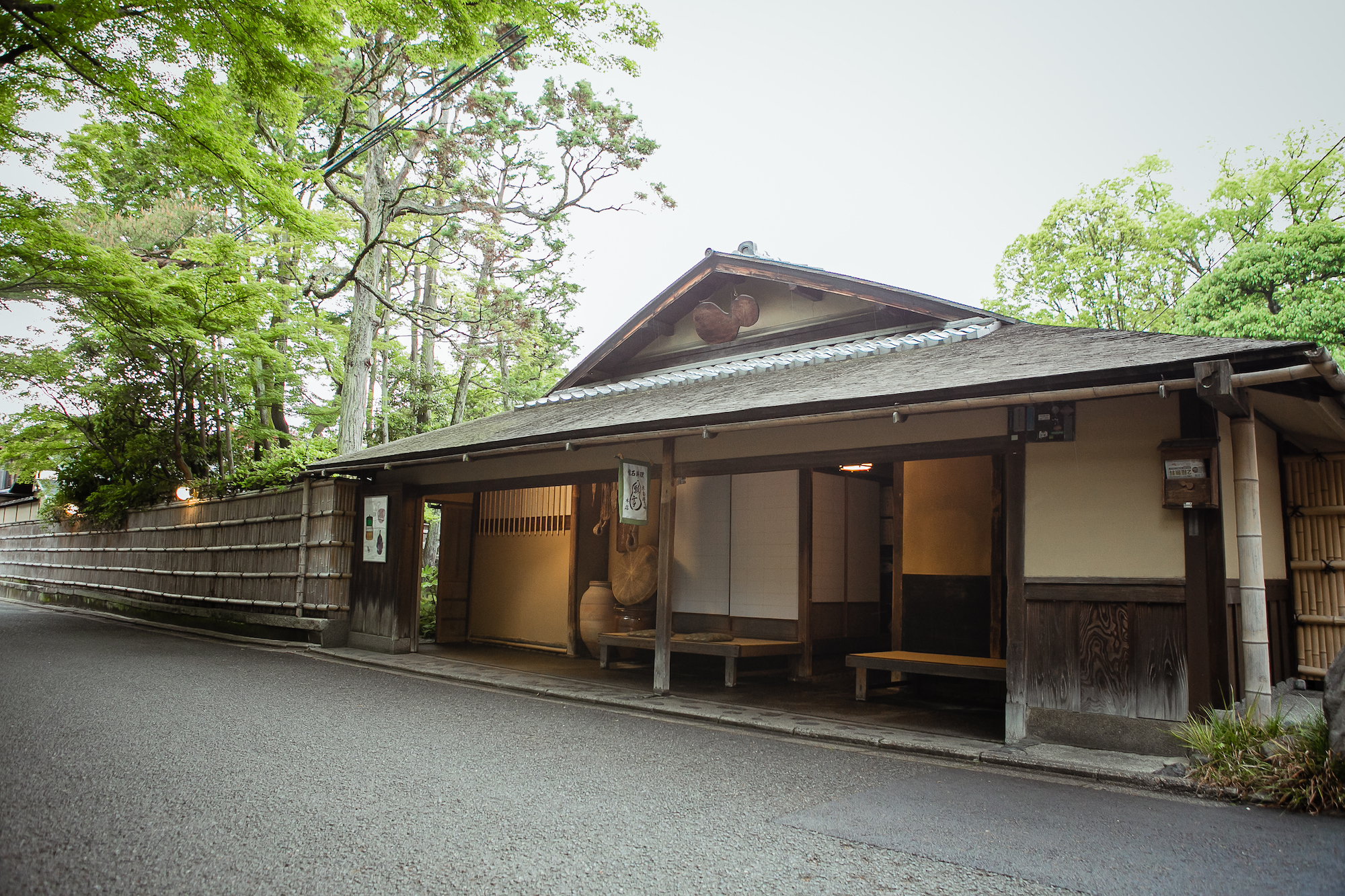