It was when Mr. Tsunemura was 34 years old that he started a small restaurant in Rokkomichi, Kobe with his wife. Within a few years it became a restaurant fully booked with reservations on a daily basis. In order to expand, it moved to Sannomiya, Kobe after ten years, and received one star from the Michelin Guide. Now he runs a restaurant with six counter seats and ten table seats, serving only the chef's recommendations, surprising the tongues of VIP guests.
In his twenties, Mr. Tsunemura says he “had never thought of independence at all.”
I took the opportunity to hear about his training period, how he had evolved, and the bond between him and his wife. 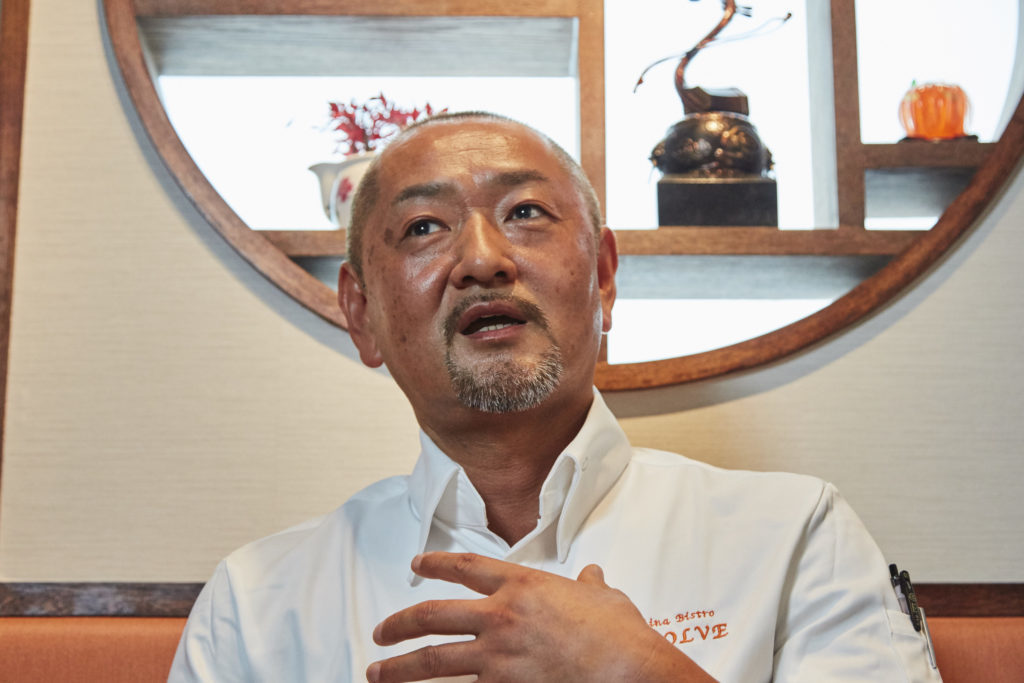 Impressed by my brother, who often cooked when my parents were absent.

Mr. Tsunemura:
I had decided around when I was in junior high school.
Moreover, it was when I was in elementary school that I started having an interest in the culinary field.
Our family was running their own business and my mother worked late, so there were days that we couldn’t eat proper meals. So one day my brother cooked me instant noodles.
The way he shook the pot looked so cool and I thought, “How amazing!”
Then I got into cooking by frying rice, trying to imitate fried rice.
The time I started to be aware of it as a job was, I think, when I saw professional chefs on the TV program “Ryori Tengoku” (Cooking Heaven) on TBS, which was when I was in junior high school.

So you started thinking about it at an early age.

Mr. Tsunemura:
I was the type of a student who started to go off the beaten path in junior high school, so I was thinking that a desk job was not suited to me. Moreover, my hometown was in the countryside of Yamagata, so the only choice back then was working in the factories.
I thought people only became doctors and lawyers when they were born into a family of them.

So before graduating junior high school I told my father, “I want to go to Tsuji Culinary College in Osaka.” But because of my bad behavior, my father responded, “There is no way that I can let you go to Osaka by yourself.” I just barely got permission, with the condition that I graduate high school.

And you graduated high school and moved on to culinary college in Osaka.
Had you decided to do Chinese cuisine from the start?

Mr. Tsunemura:
In our era, the style was to learn all kinds, like Japanese, Western, Chinese, and pastry, and moving on to the one we wanted to do when looking for jobs.
I was trying for Japanese cuisine before entering college, and had decided to go to work in Kyoto. But as I took my lessons, I realized that I did not like the vinegared dishes of Japanese cuisine, and the knives were single bladed and hard to use. On the other hand, French was cool but it wasn’t very fun because 60-70% of my schoolmates were studying French, so my dream changed back and forth.

Then in the Chinese cuisine workshop, the process of shaking pans started.
The preparation of Chinese cuisine is very detailed, but once you start shaking a pan, it is a battle of speed. When you mix materials and sauce and add fire quickly and flavor them all, the unimpressive flavor of the sauce itself changes like magic. I was excited by the dynamics of it and decided that Chinese food might suit me the best.

Starting to feel anxiety when I couldn’t use a knife, even after three months.

What kind of restaurant did you join first?

Mr. Tsunemura:
There was no work for me if I returned to Yamagata, so I headed to Tokyo first, knowing that I wanted to go to a city. I went to interviews at two restaurants and decided by standards like the size of the company, class of the restaurant, and even if the servers wore Chinese dresses.

Back then I was 19 years old, not knowing reality yet. Perhaps I was still a student on the inside.
In Chinese cuisine there are many genres, like Canton, Sichuan, Shanghai, and Peking, but I didn’t even know about that. I was hired but I resigned after three months or so.

Mr. Tsunemura:
One of my classmates who joined a famous Chinese restaurant in Tokyo said, “I cut my finger when I was cutting Szechuan pickles.” That’s when I had doubts regarding my current situation. The restaurant I entered was a large one, so I hadn’t ever held a knife, even after three months.
There was 30 staff just for the kitchen, including 6 or 7 who joined at the same time as me. Moreover, it was a restaurant with everyone in fixed positions so, for example, the person who does appetizers always does only appetizers and the person who does prep work also does nothing but prep work. In all positions, we start as underlings.

The star of Chinese cuisine is the person manning the pans. Of course there are many applicants, and we who are in our first year only do things like monitoring parking lots, cleaning the drains, and cleaning the floor of the garbage room. Even the seniors in their fifth year can’t cook. I was starting to have anxiety, wondering if I would be okay remaining here in the future.

So I asked my senior, who was in his thirties and had experience at another restaurant, and he said, “If you think that way, you can learn your job by moving to another restaurant.” And with that I made up my mind.
But my behavior was bad so when I told my parents, I got in a fight with them; they said, “See, I told you so,” and so I could not quit that easily. At last, with the help of my senior who talked it out with my parents over the phone, I could finally move onto the next step.

You were 19 years old then. I think that when you were suffering from that emotional strife, you had a mind to escape from there. What motivated you to hang in there?

Mr. Tsunemura:
In my case, it was my parents. It was obvious that if I quit and went back to Yamagata, they would say, “See. I knew you couldn’t do it.” It was the biggest factor for me. Of course I had a sense of crisis, thinking about losing a place to live, but my stubbornness of not wanting to lose was biggest.
I was also supported by the presence of the colleagues who entered in the same year as me. They were working hard even though they would also complain at the same time.

How did you look for the next restaurant?

Mr. Tsunemura:
I was introduced to it by a professor from the college who was in charge of Chinese cuisine.
I was actually taking my lessons seriously, and I even received an award for my post-graduation work.
When I graduated, he asked me to become a teacher. I didn’t think of myself as a person who could teach, and I wanted to work in the field, so I turned him down.
And when I quit the restaurant in Tokyo, I talked to that teacher who had valued me all along. And he introduced me to a newly opened Sichuan cuisine restaurant in Nishinomiya called Kofukumon. 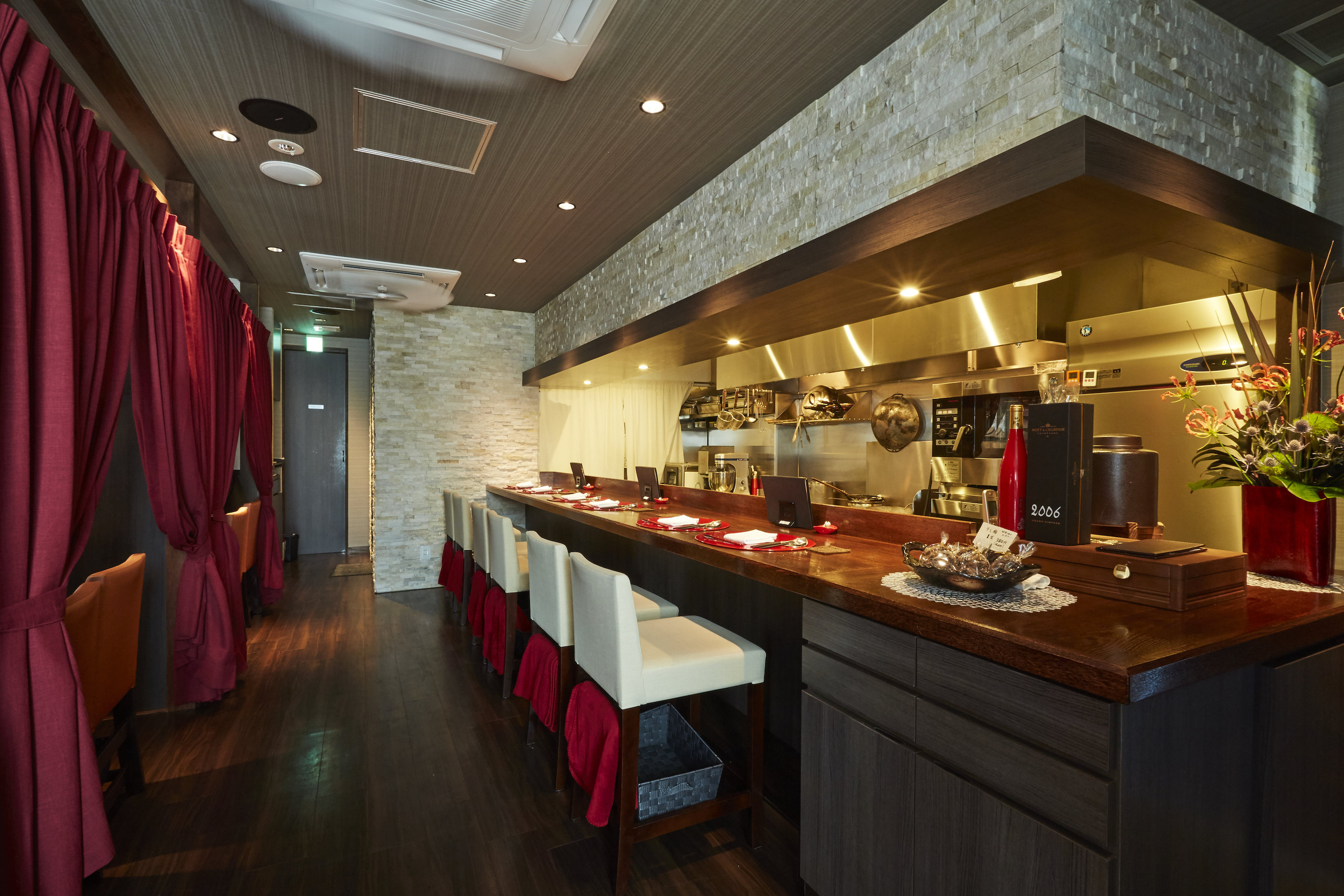