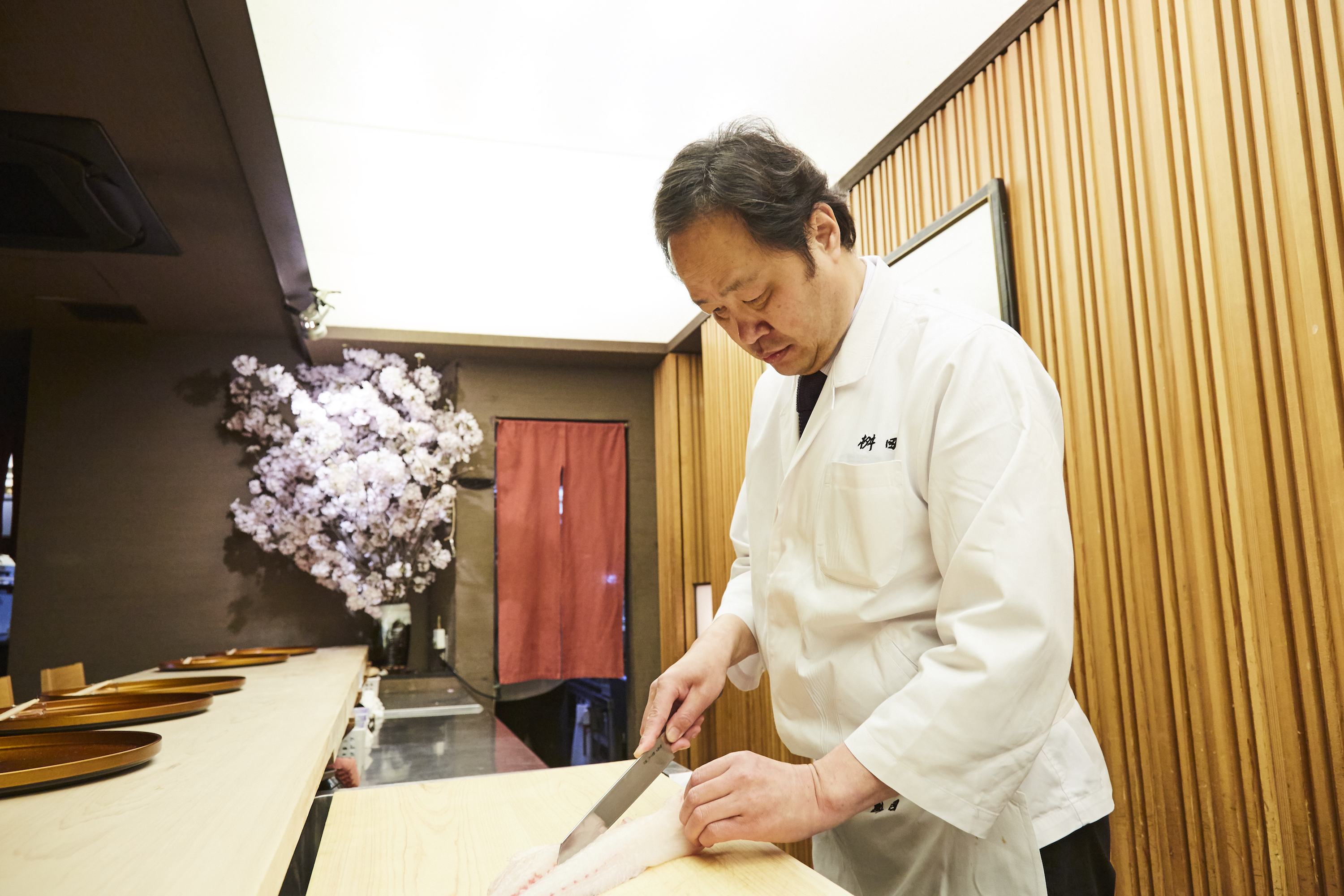 Kaiseki Cuisine Masuda is located in a quiet place that is one block separated from a lively amusement center in Osaka known as Shinsaibashi. The cuisine which has been continued to receive two stars since 2010 from the Michelin Guide Kyoto/Osaka is full of lively effects that catch the hearts of women diners. It is also known widely as a restaurant which is often fully booked six months out. This chef takes on a great role as an instructor at Tsuji Culinary College, with excellent trainees surrounding him, and I took the chance to hear from him about his path since his training period and his thoughts now. 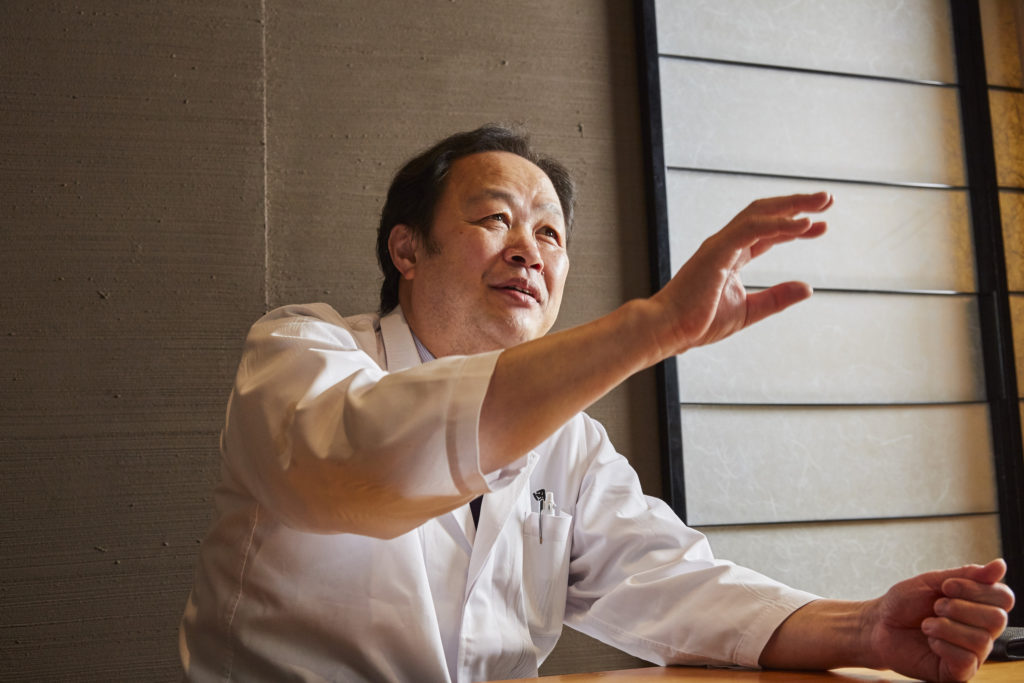 Admiring the main character of a popular drama, and aiming for the path of chef.

What caused you to want to be a chef?

Mr. Masuda:
It was when I was in my second year of high school that I started to thinking about becoming a chef.
I was thinking about going on to a trade school, but I was into a drama called “Dear Mother”, a show about food set in downtown Tokyo. It was a drama about young people in which the actor Kenichi Hagiwara played a man who tried to become a chef. It was very cool and I admired it.

Until that point I thought I would move on to university and become a businessman, but suddenly I started excitedly thinking about becoming a chef of Japanese cuisine”
Also my hometown was Kawakami-mura, located in Yoshino, Nara, and we had been running a fish market that my grandfather started. We served food for celebrations and memorial services and I had seen my father’s skills with a knife, so I might have admired that, too.

So as soon as I graduated high school I decided to study at Tsuji Culinary College in Abeno, Osaka for one year.

After graduating, how did you decide where go for your training?

Mr. Masuda:
The first place I trained at was Kiccho. When I talked to a teacher at the college, he recommended it, calling it “the world’s number-one restaurant,” and it was a big opportunity.
And after being hired I was assigned to Kiccho at the Rihga Royal Hotel.
(*Currently Kobe Kiccho)

Training was traditional, where I started as a messenger, and of course it was very tough. Young employees in their first to third years lived together in a dormitory, which as renovated from a an old elementary in Toyonaka, and there were about three rooms that were previously classrooms. They were full of rows of bunk beds.

There were about 50 people living together and there was no private space at all.
And we went to the hotel from the dormitory on a small bus but there was no air conditioning and we were all packed tight! There was no time to rest my mind, being with our seniors all day long, and I thought, “I have come to a terrible place.”

I actually thought of quitting after just three days, but I had just been sent off splendidly from my hometown. When I left, neighbors gave me farewell gifts and I left with words, “I will strive hard and train in the city,” so I thought I could not go back so soon, so I decided to tough it out.

Kiccho back then had five restaurants: the Koraibashi main branch, and locations in Kyoto Arashiyama, Tokyo Ginza, Semba, and the Rihga Royal, and they were going to increase the number of restaurants so it was very busy every day.

Along the way I was assigned pickling and boiling in my second year, appetizers in my third year, and my training for the second position of tsukuri (sashimi) was going smoothly.
I trained at the Rihga Royal Kiccho for five years from 1980 to 1985. 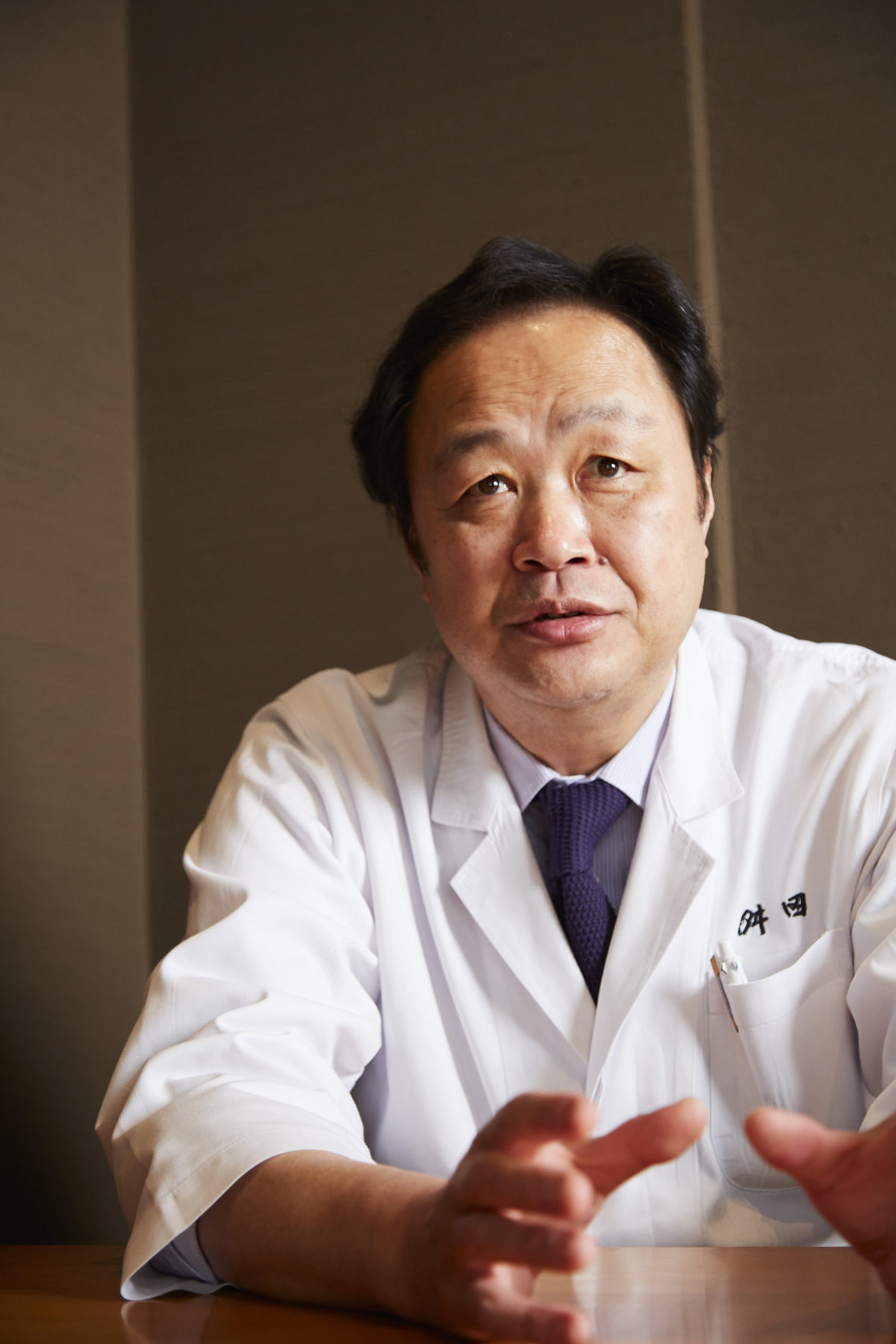 Your stories tell the atmosphere of an old yet traditional training and mood of the era.
How was your career after training at Rihga Royal Hotel?

Mr. Masuda:
It had been five years after training at Kiccho when I was starting to think about moving to another restaurant for training.

Actually I had a specific image of a restaurant upon looking for the next place for my training.
On my second or third year of training at Rihga Royal my senior took me to an itamae kappo restaurant in Kyoto, and the atmosphere was very good and I was thinking that I wanted to work at a counter-style restaurant.

It was a small restaurant with only a counter, giving it a very relaxing atmosphere. You took off your shoes and came in which was quite particular to Kyoto.
I thought it was good that the master, the hostess and the young chef were talking with customers with smiles.

Kiccho was a ryotei (Japanese traditional cuisine restaurant) so there was no counter and no chance to talk with customers. That’s why I started thinking that I wanted to work at a counter-style shop.

And when I visited my teacher from culinary college and mentioned that, he introduced me to the hostess who ran a counter-style kappo restaurant in Higashi Shinsaibashi.

I was honestly unsure if I should stay at Kiccho for five more years or so and learn Japanese cuisine even deeper, or move to another restaurant, but I had made up my mind to work at a restaurant with a counter, so I thought it might be a good chance, and I decided to train there.

That counter style has something in common with your current restaurant. How was the training at the new restaurant?

Mr. Masuda:
It was 1985 when I moved to a counter kappo restaurant called Esato. There was a head chef so I entered as second chef. I was quite perplexed since everything was totally different from places like Kiccho.

In particular, the most difficult part was cooking while serving. Unlike Kiccho, which served course meals that were pre-set, all menu items were a la carte so first we had to ask customers for their orders. If it were a set course, it was enough to serve prepared food when they arrived, but we had to start by telling them recommendations, like, “Today we have this or that.” It was quite difficult until I got used to it.

And the restaurant was located in Hachiman-suji of Higashi Shinsaibashi near Namba and there were lot of bars, lounges, and clubs where people drank alcohol, so there were many customers with “dohan” (coming to a restaurant with a lady who works at a bar before they go). 60% of the customers were dohan and remaining 30% were hosting guests or customers so I had to take care based on the situation.

Dohan customers came after six p.m. and told us, “I need to report to the bar by eight so cook quickly for us.” So we needed speed. It was a totally different experience since I had to take orders, talk, and cook all in a short time.

Were the foods that were served in Esato and Kiccho totally different, too?

Mr. Masuda:
What was different between those foods was that we did not need to serve bowls. It was mainly customers who drank alcohol, so after they enjoyed sashimi, fried food, grilled food, they would go elsewhere for rice or noodles, so they would not order food in bowls.

In Kiccho I was taught that, “The star of Japanese cuisine is bowled food,” so I was honestly surprised. And I noticed after working there, bowled food shone like a star when the structure had a story. It adds structure to take a break with warm bowled food in the middle of the course, opening the lid and feeling the aroma of dashi and enjoying the seasonal ingredients.

At that restaurant, due to the chef’s decision, the menu was a la carte only, but he went independent two years later. And after I became head chef we added a mini course selected from the a la carte items. I also added bowled food to course but it was often left uneaten. Since I became head chef I integrated food that I learned at Kiccho and changed the content of the menu.

You became head chef after two years. How was that job?

Mr. Masuda:
I became head chef in 1987, two years after the Hanshin Tigers won the pro baseball championship. It was at the peak of the bubble economy.
All restaurants stayed open late at night and in Shinsaibashi there were so many people that it was hard to walk down the sidewalk. It was like a festival every day and we were busy at our restaurant.

And during my second year as head chef, the restaurant became a bit smaller so the hostess-owner decided to move it to the third floor of the building she owned.

It became a big restaurant – from one with eight counter seats to one with ten counter seats and three private rooms, but everything went smooth after moving. It was the same time that Mitsuta of Toyonaka Sakurae joined and we ended up working together for eight years.

The era moved on and the bubble economy was settling but the type of customers had not changed, so we had many dohan and people hosting customers. After that we were running smoothly but the hostess was old and wanted to retire so when it closed, I decided to go independent. 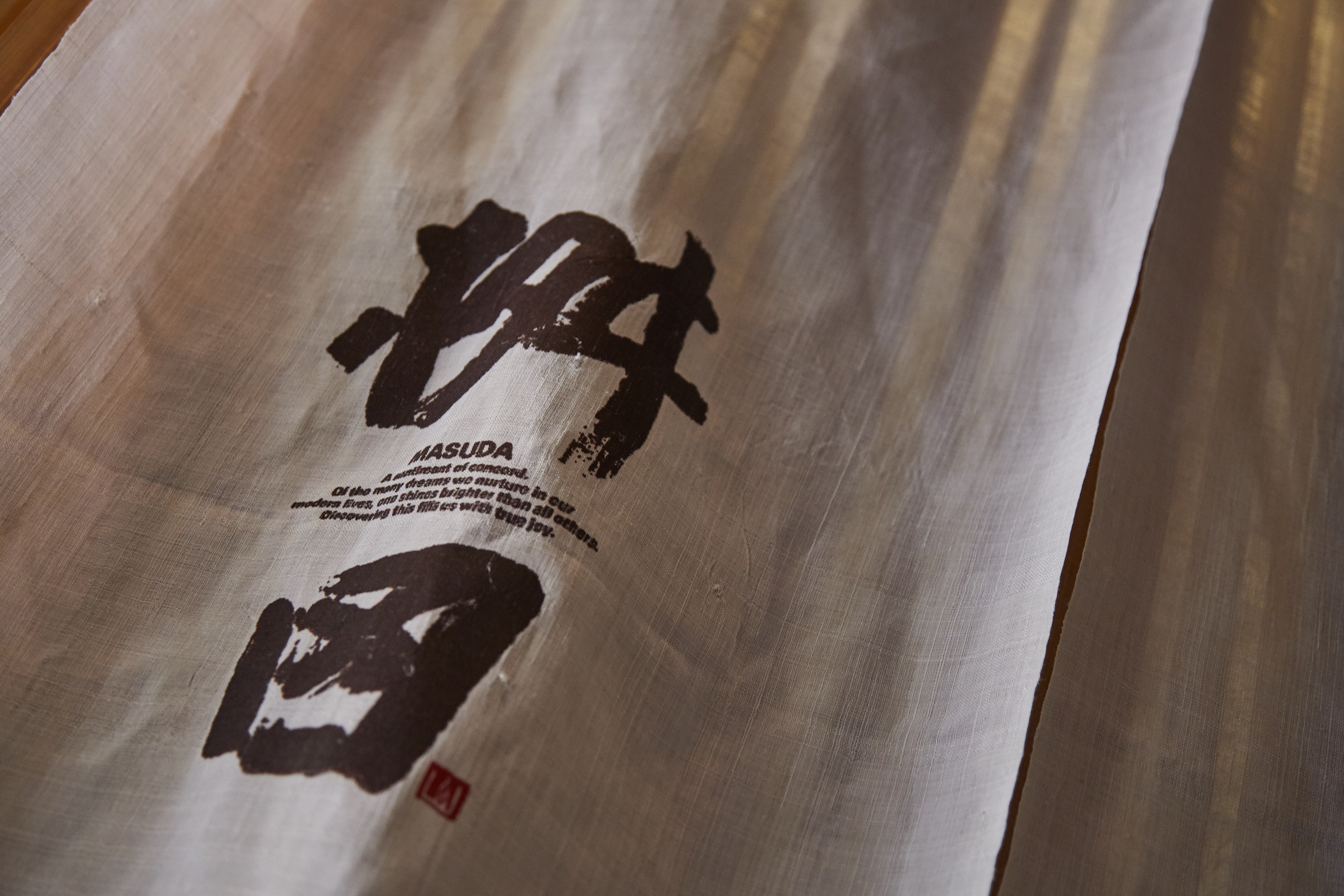