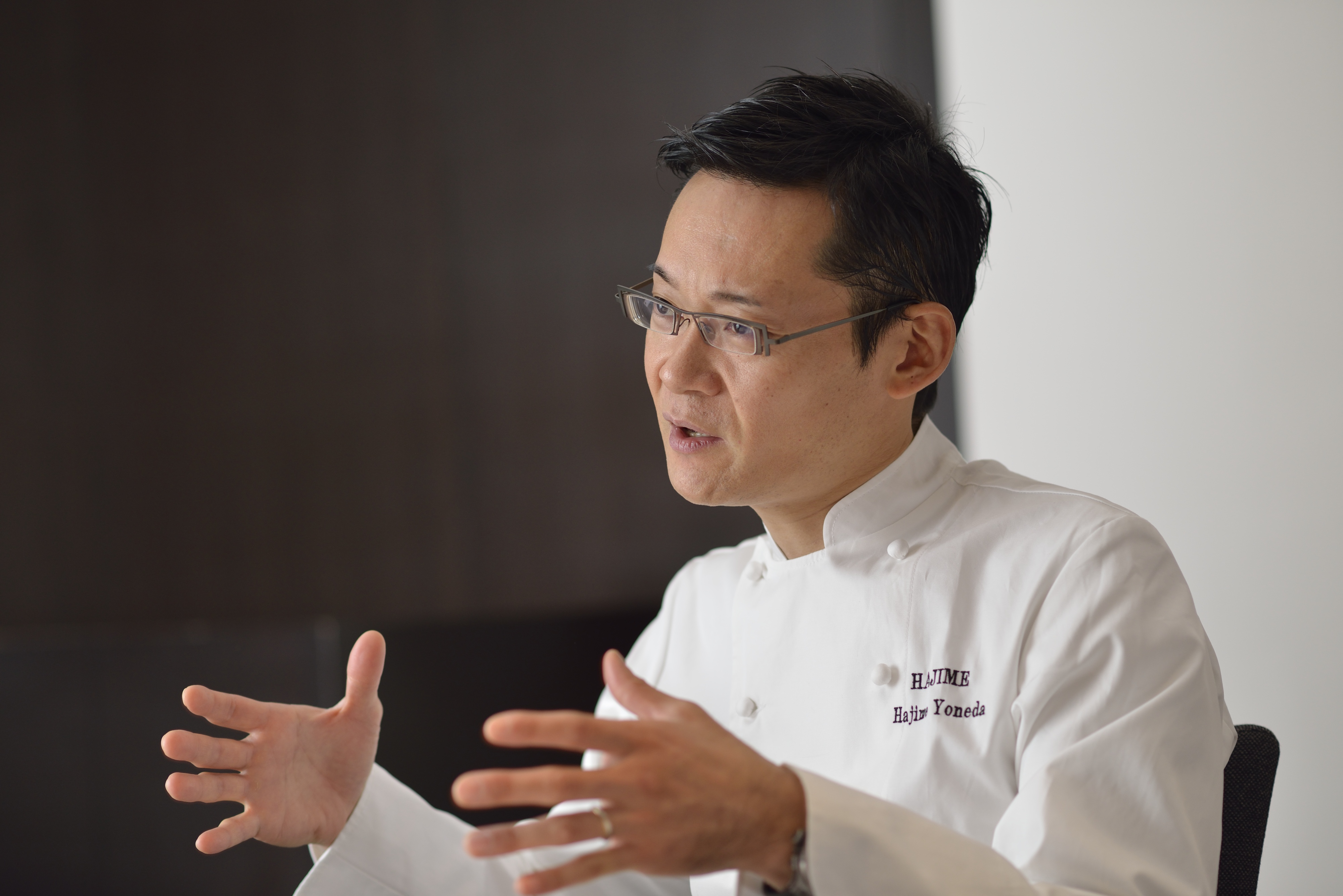 The restaurant HAJIME, adapting to the times without fear of change

You pursued the “HAJIME style” to the point of stoicism.

Yoneda:
Originally, we had about 400 inquiries per day, and the phone would be ringing all through our business hours. Customers who couldn’t get through would often get angry at us, and I developed a sort of phone neurosis. As soon I’d answer the phone, I’d start by apologizing for the inability to connect.

We were way too busy, and both the staff and I were a wreck. I couldn’t sleep, was piling up the stress, couldn’t do what I wanted, and could only create arrangements of things on the menu because I couldn’t give it hard thought. I felt that people who become famous also become unhappy in a sense. A situation continued in which I couldn’t turn to the people who supported me, the young people who say, “I respect you and have the same aim,” and tell them “Go for it” with pride.

“If this keeps up, the staff and I will be exhausted, and I won’t be able to do what I want,” I thought, and resolutely decided to change my style. I increased the cost of courses from 10,000 yen to 30,000 yen, and switched my business hours to  night only. The number of customers dropped like a stone. As I had also bought all-new tableware and furniture, my losses in that one year jumped to about 20 million yen.

I felt I really didn’t know what to do. However, I kept on fighting, with one point in mind: that in the end, if I kept making good things, people would understand. I rethought things from square one, including brand strategy, so that we could bring in customers from overseas too. We gradually shifted from guests who would come even if they have to wait, to guests with free time who want to use time and spaces as they please. However, there were problems, such as guests who wanted to enjoy a meal quietly but returned home without eating because of the presence of groups of guests. Sometimes I felt the difficulty of balancing the part about meeting customers’ wishes with the managerial part.

You keep changing a lot, don’t you. Didn’t you ever feel afraid of changing?

Yoneda:
It was the same as when I quite working as an engineer, but from way back, I don’t feel fear when I take on something new. Rather than getting scared over starting something, I have a stance of “if a problem comes up, make improvements” at the base. If the food isn’t good, implement improvements to make it good.  If customers have dropped off, analyze why they dropped off and make improvements. For each result, think about what should be done based on that. Analyze and make improvements. It’s a repetition of that.

Allow for failure, and perform tuning. It’s a scientist-like approach, isn’t it.

Yoneda:
It truly might be. However, when the business of the restaurant gets set on a track while you’re making improvements like that, every day becomes a repetition of rotation. You and the staff both lose interest, and boredom sets in. When that happens, you raise prices, or switch from daytime business to night only. I’m trying to blow in some sort of new life, or tackle some new problem.

To survive when the era is always changing, I think that we have to keep changing too. Be sensitive to picking up changes, and try things. I believe that even when we’ve failed, if that creates an example for other restaurants to follow, then it’s fine for us to be the guinea pig. The fact is that a lot of local chefs come to me to talk about things. I think that’s because there are a lot of people locally who are interested in the trial and error of HAJIME, which is carrying out a lot of experiments in the Osaka region. It leads to regional revitalization, so I actively cooperate. 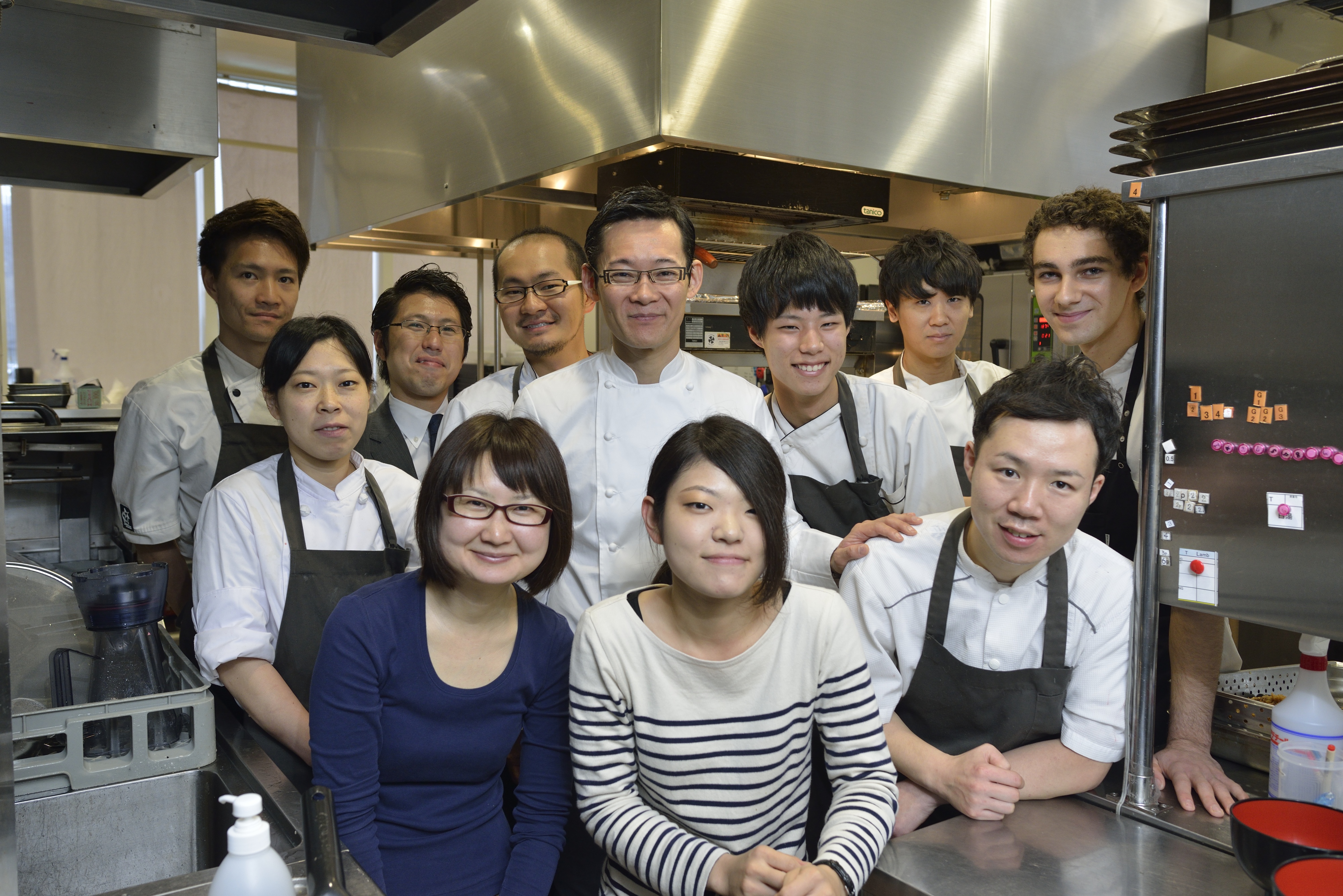 The HAJIME style of education – To become the Apple or Google of the gastronomy world.

Tell us about education at your restaurant.

Yoneda:
I have a goal that I call “communicating the world’s highest peak of emotion to the world.” I think of the staff working at my restaurant as a group of colleagues gathered to make that goal happen. We can work toward that goal together, for years or tens of years. Every day I talk to my staff about becoming a creative group like an Apple or a Google within the gastronomy world. Naturally, I totally support those who go independent because they now want to do something different from HAJIME.

Against that background, what I can say about education is this: “In any case, talk with staff every day.” I communicate my thoughts and intents, as much as possible directly and using my own words. Regarding cooking, I quantify things as much as possible, down to the millimeter. For presentation, that means “place it this many centimeters away, at this angle.” Seasonings are down to the gram, and, when cut, vegetables are down to the millimeter. That’s because when you put things into numbers but share them by feel, after a few days they become entirely something else. Also, when you have to create 30 of some menu item, if the meat that’s cut for one serving is off by 5 grams, a total discrepancy of 150 grams results.

But all that doesn’t mean that I only push my own thinking. I suggest to the staff that we positively carry out ideas for improvement and new proposals, and keep making minor changes. In this regard, all of the staff, whether in their teens or their thirties, are equal regardless of experience. In the end, the overarching objective is to deliver emotion to the customer, so we should take on any challenge toward that end. I’ve introduced medical instruments into our kitchen, such as medical tweezers for arrangement of presentation. The reason for using medical instruments is that they are fast, precise, and hygienic. I think we try a lot of things that other restaurants don’t.

Medical instruments! There are a lot of similarities between chefs and doctors, who are involved in the essence of people; if you dig into it, medical instruments may be a natural thing. Are there things you’ve devised to promote good teamwork?

Yoneda:
I supply support funding for staff going to camp, and hold parties several times a year. I also hold a meeting every day to share information and to communicate. We talk in quite a bit of detail about what we learned yesterday, about today’s schedule, and about specific customers. In addition, I have everyone nap for 15 minutes after the meeting. Giving the brain a refresh lets us concentrate afterward on our work.

The staff is still undergoing growth, but in any case, I hope to become able to create team divisions within the group that is HAJIME, and then have teams move forward on different projects. These include not just turning out highly artistic cuisine, but also projects elsewhere that cross artificial intelligence with gastronomy, and projects combined with medical science. I want my teams to be able to achieve things that I wanted to do. I find it interesting to be involved in all kinds of areas, not just cooking. 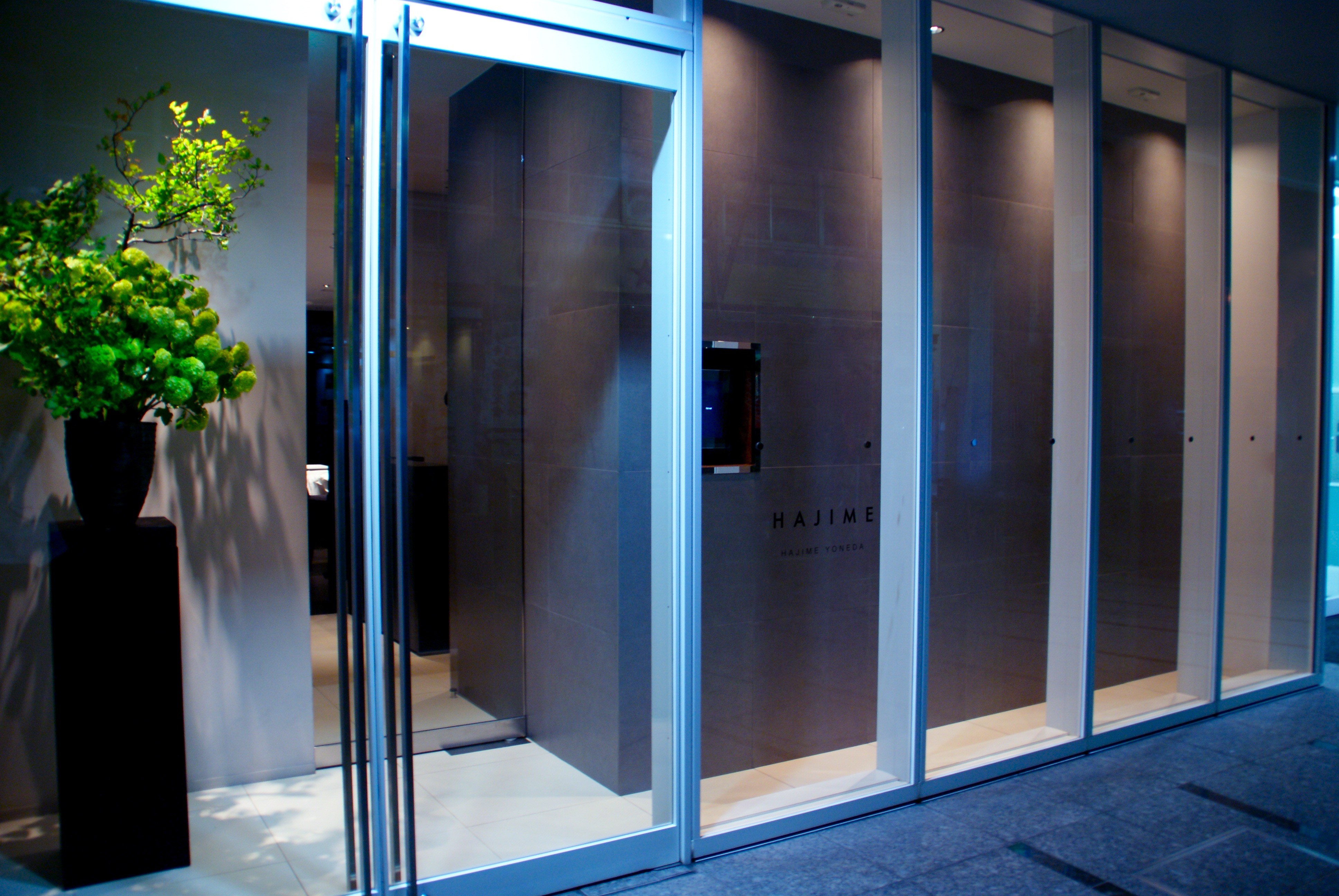