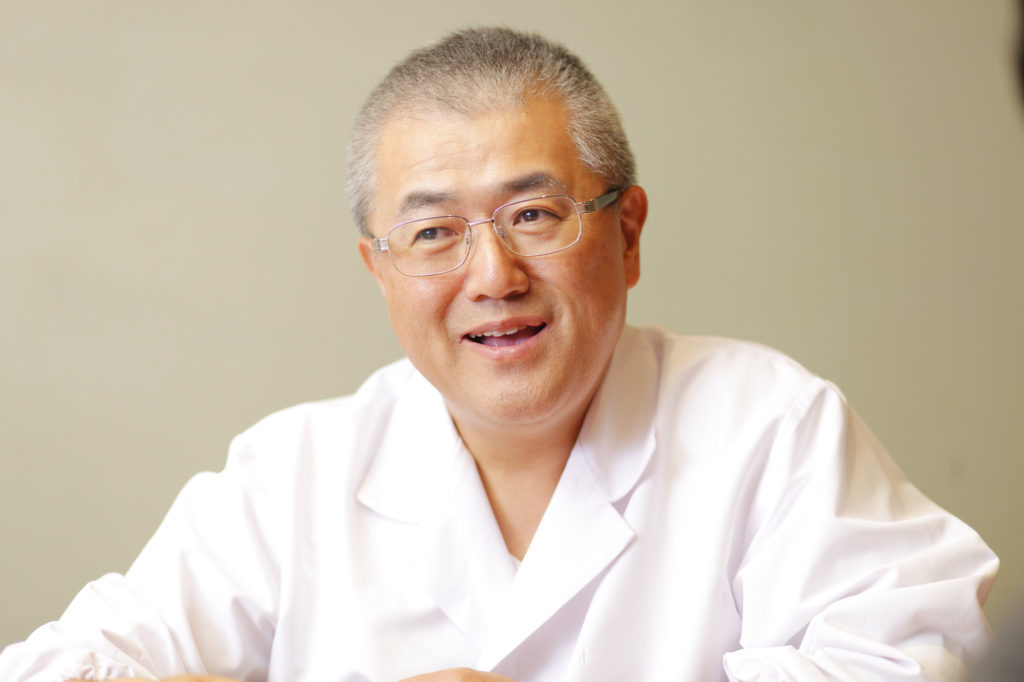 To have a unique point of very and originality which I can only create in my restaurant.

What made you concentrate on creating something unique and interesting?

Mr. Wada :
It was when Skylark Garden was opened. *3 Skylark Garden is all-you-can-eat buffet and also has all-you-can-eat freshly baked bread. Their Hamburg steaks are much more delicious than restaurants in the city, wines are cheap, and they serve fresh cups of coffee when you order another cup. (They had a spray toilet in 1994!) If such a good restaurant opened near my place, my restaurant would go under soon. I felt a sense of menace. This made me think I would need to create original cuisine. Something which is popular but definitely different. Otherwise, I wouldn’t be able to continue in the food industry. It was then that I made my path very clear. I decided to have very expensive and rare liquors in my restaurant, ones that even big popular restaurants wouldn’t be able to get. *3: Skylark Garden  Skylark garden was an exclusive Italian-style family restaurant. By 2009, all the chain stores under the Skylark name shuttered, but their chain restaurant business survived uner Skylark Inc and has many popular restaurants, such as Bamiyan, Gusto, and Jonathan’s.

Any restaurant would want to create original dishes. You must have struggled a lot to find a way to create yours.

Mr. Wada :
There are many good things in the world. However, you don’t realize when there is a great opportunity around you. You need to think about how “this is the opportunity for me.” There are many opportunities where you can come across good things but there are also many people who don’t realize it. Why I was able to get information about these excellent foods which became my restaurant’s original menu – such as hard liquors, okukuji shamo (modern game fowl) and other excellent ingredients – was because I always read books written by Masuhiro Yamamoto, like Kangaeru Shita, Shukan Gendai, and Dancyu. I read Lemon Heart – which was very popular at that time. When I found something interesting in the books, I always went and ate them or made inquiries about them. I always took action right away. You really should read Dancyu very closely. It is an excellent book even though it was written a long time ago in the nineties. Everybody says this is a great book. You can find a lot of information on the internet but you can’t really trust all of it.  *4 Masuhiro Yamamoto A food critic. His book, Yamamoto Masuhiro no Kangaeru Shita Erabinukareta 90-ten (1989, Nesuko) introduces a lot of great restaurants all over Japan.  *5: Dancyu  A monthly food magazine published by President beginning in December 1990. *6: Lemon Heart  BAR Lemon Heart is a comic book originally written by Mitsutoshi Furuya. It is a story about people in the bar and there is a lot of information about liquor. It is a famous manga and has been serialized in Manga Action (published by Futabasha) for more than 30 years now.

You stopped serving hard liquor in 1991. You started a yakitori and wine restaurant which was becoming popular at this time. What made you think you would make this shift?

Mr. Wada :
The reason why I stopped serving hard liquor was also because other restaurants started serving them. Parallel imports became very popular. The prices became lower and it was no longer special for people. The wine I had in my restaurant was Goichi Wine, which was produced in Japan. I started tasting great French wines of 1989 and the 1990s and then started foreign wines.
I started serving Chilean wines in 1993. There was a Chilean wine wave in 1997 so I was ahead of the trend! I started Chilean wines before the wave came so it was not easy. There were so many customers who said “Chilean wines are very spicy, right?” I always thought, the “Chile” does not mean chili peppers!!  When they became more popular and Chilean wine became very famous, I stopped serving them.

You have a unique point of view! Did you always tend to stop doing something when people around you started doing it?

Mr. Wada :
I simply told myself I would stop doing things if people around me started them. It is not fun if everybody does the same thing, right? You should create something unique if you have your own restaurant. 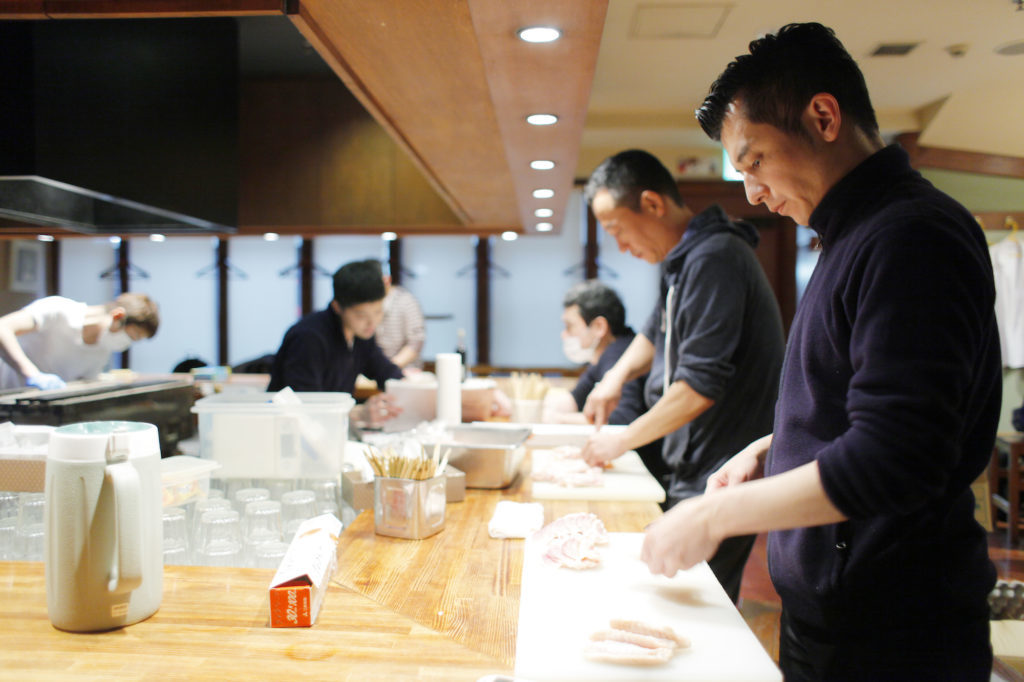 It is not too late to develop a sense of taste.

I think chefs need to have a developed sense of taste. I heard that you also eat out a lot.

Mr. Wada :
When I was young, I used to eat out a lot. I belong to a team which consists of chefs from the Kansai region and we eat out on the first Sunday of the month. We decide a theme every month and eat out. Even if you want to join the team, they don’t allow others to join easily. It seems I am an honorary member so they call me to participate all the way from Tokyo! If there is some space, I am sometimes called to join.

You are still highly studious about food! Do you think what you ate in your childhood is also important?

Mr. Wada :
I think what you ate when you were in your twenties is very important.
So I don’t think it is too late to develop a sense of taste after your twenties. You can focus on the management first and get more chances to develop your sense of taste after your business does well. A long time ago, people used to say that what you ate when you were a childhood was the most important thing. However, a university professor wrote an essay and he said in the essay that the second period of growth is very important, and there is a huge effect in the growth of the sense of taste during that period. For example, when you start to live by yourself after graduating from university. You have a lot of choice because you will be away from your family that created your sense of taste. Even though I was in a poor family and was not able to eat quality food when I was a kid, it doesn’t mean that I wasn’t able to dream of becoming a chef. If you are interested in something, it matters how you try to get yourself involved in it. When you start to live by yourself, you can eat things you couldn’t eat when you were with your family. You will also start drinking alcohol, too. The world is becoming bigger and bigger. Therefore, I think what you’ve eaten when you were in your twenties is very important.

You ate out a lot in order to develop your sense of taste since you were that age.

Mr. Wada :
I read Kangaeru Shita when I was in the second or third year of having my own restaurant.
I learned of a Chinese restaurant called Chikuro Sanbou in Kichijoji. I was on the way to purchase ingredients but I bought the book right away. I then went back to the restaurant to eat. It was Monday and I ended up eating lunch at Chikuro Sanbou for a week! I sometimes went there for dinner, too. As a result, I went to the restaurant about 20 times in one month. What I want to say is that when you find a restaurant that you have a special feeling about, you need to visit as much as possible. Many food critics in my generation visited their favorite restaurants so many times. It is a good way of finding out something different, too. For example, a fish is edible from head to tail. However, the important thing is which part of fish you would cook and serve. Of course, you would serve a good part of it for good customers, right?  At the sushi restaurant where I used to visit often, they served sliced sashimi from the sushi case to different customers, but when I visited, they always served fresh sliced sashimi from the fridge and made two pieces of sushi for me. Our services vary from the quality of customers. Therefore, I try my best to make customers think they would like to eat something more delicious and special. 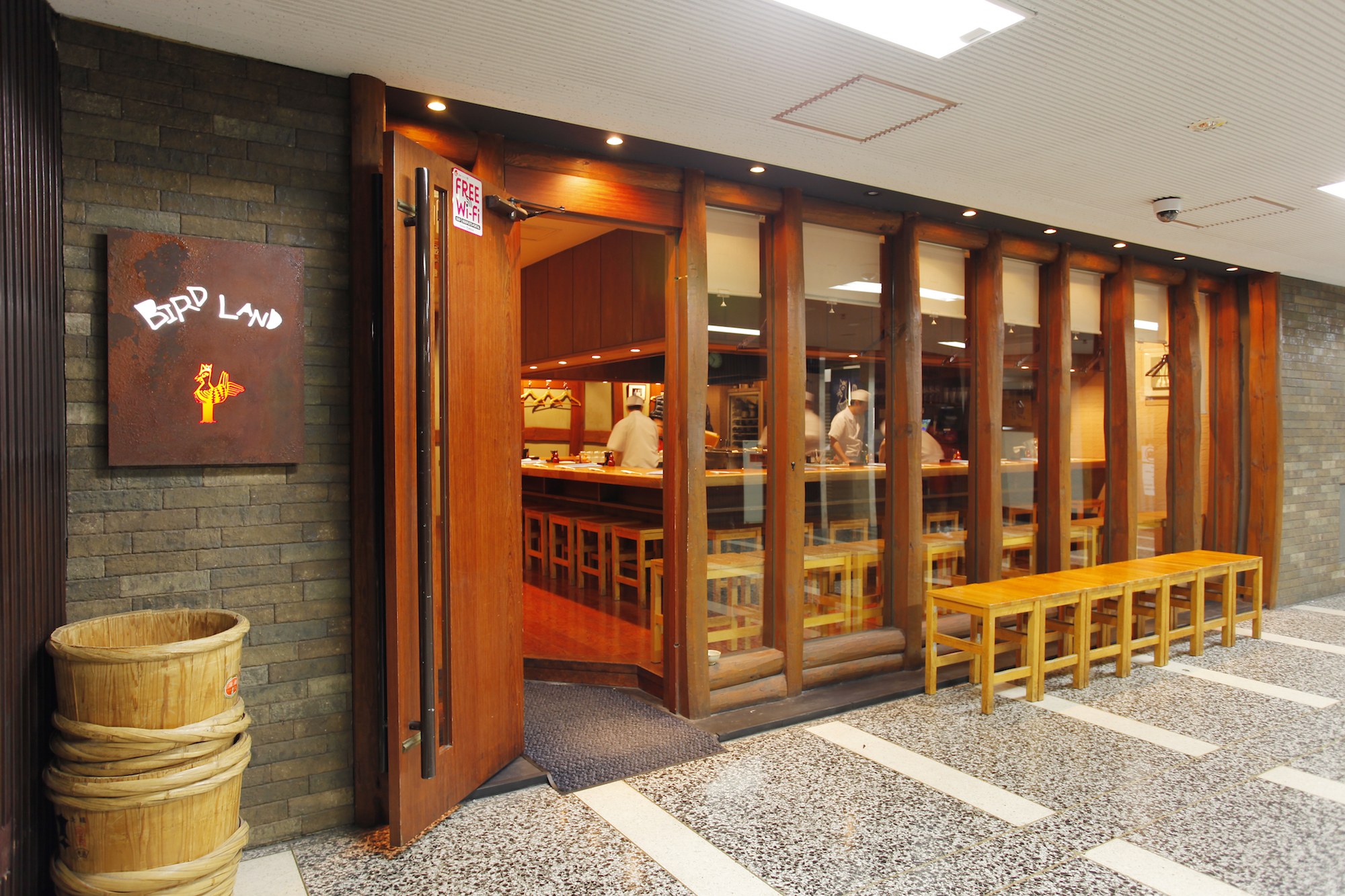