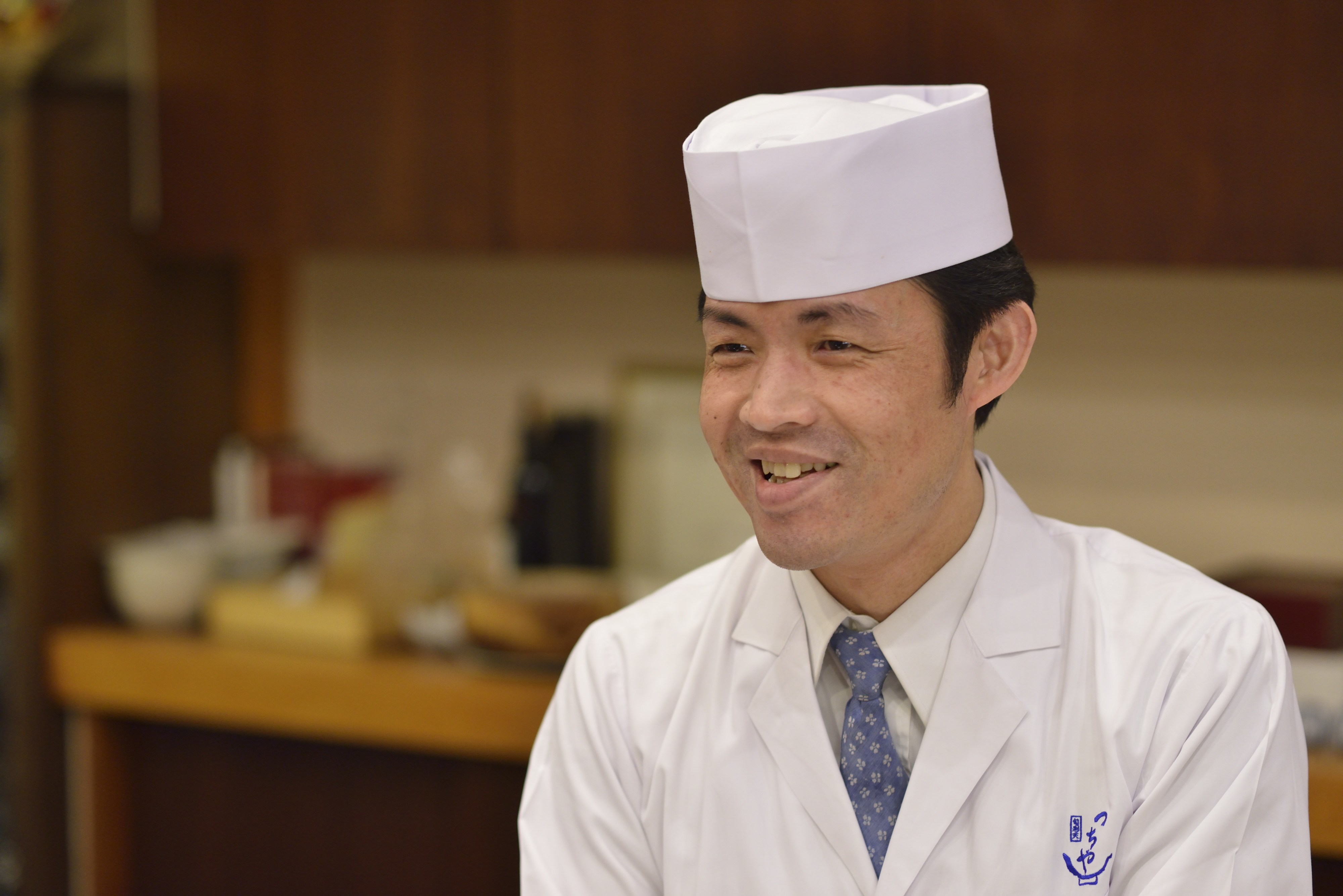 Suita city is located on the Hokusetsu region of Osaka. If you walk about 15 minutes from “Esaka station” on the Midosuji line, you will find “Shunsaiten Tsuchiya” at the corner of a residential area. The restaurant has received 2 Michelin stars 5 years in a row since 2010. The tempuras and Japanese dishes master Tsuchisaka prepares has an extravagant surprise and a hint of “tranquility” that reflects the chef’s character. In this interview, we asked him how he got to where he is today, and what kind of restaurant he is trying to build now. 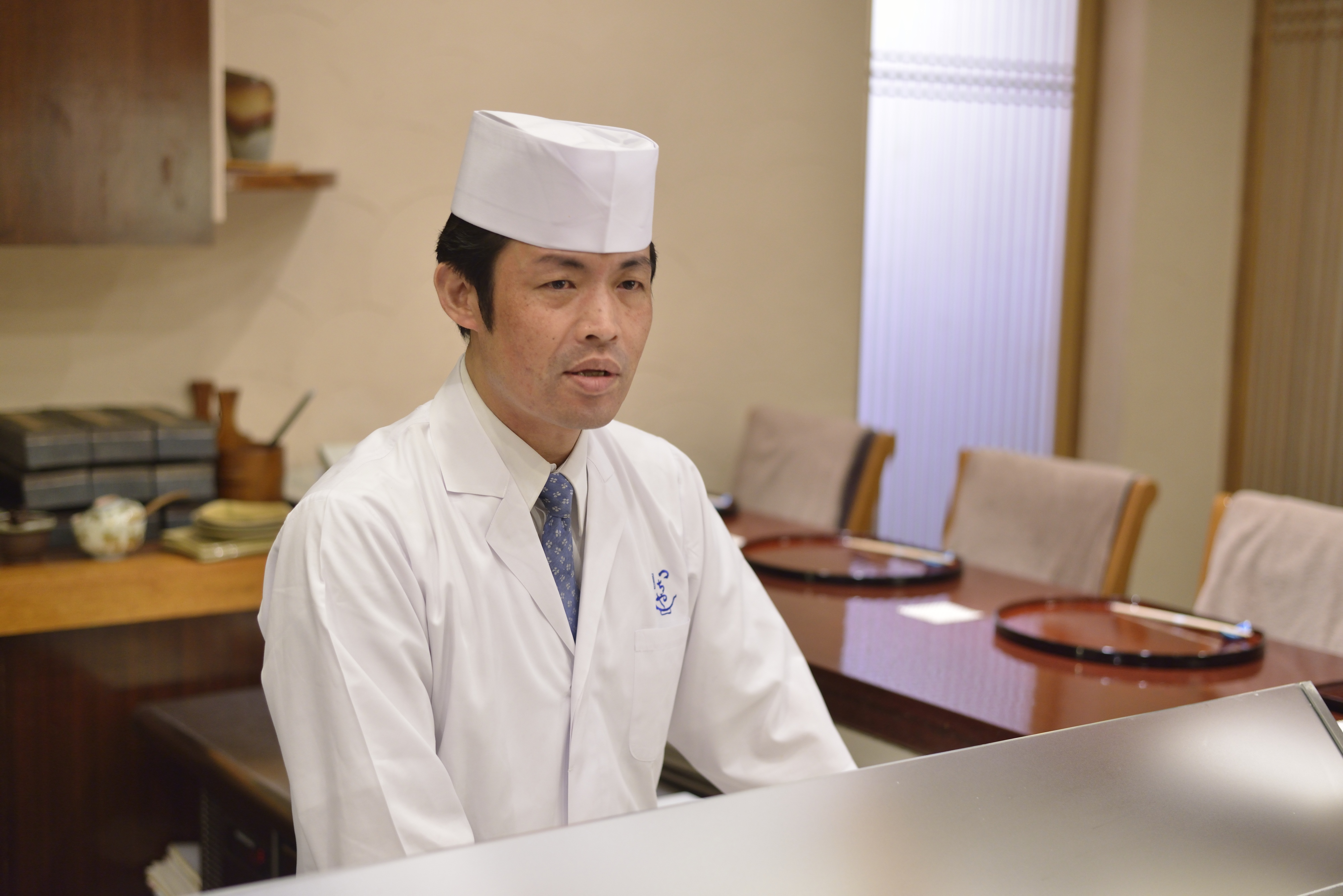 What made you want to join the world of professional cooking?

Mr. Tsuchisaka:
My father was a master carpenter.  He had a building company in the countryside of Shiga.  But I had an older brother, so I wasn’t going to inherit the business.  Even after entering high school, I had no idea what I wanted to do in the future.  I joined some clubs, worked part-time, you know, the regular things students do.  Then, during summer break of my second year in high school, I started working at a supermarket, where I was assigned to work in the fish department.  My job was to wrap the fish, weigh it, put the tape on, and put them out in the shelves.  It was easy work.

Then one day, we received an order for a sashimi plate.  A sushi chef from a nearby restaurant came by to help us.  The chef then scaled, gutted, cleaned, and filleted the yellowtail to prepare the sashimi dish in no time.  The fish must’ve weighed more than 10kg.  I was amazed when I saw this.

“Being able to fillet a fish, and being able to cook is so cool” I was simply amazed.  Even to my mother, who cooked for us everyday, I started asking, “What’s in this?” or “How did you make this?”  After high school, I started living in a dorm of a cooking school in Osaka where I studied for a year. 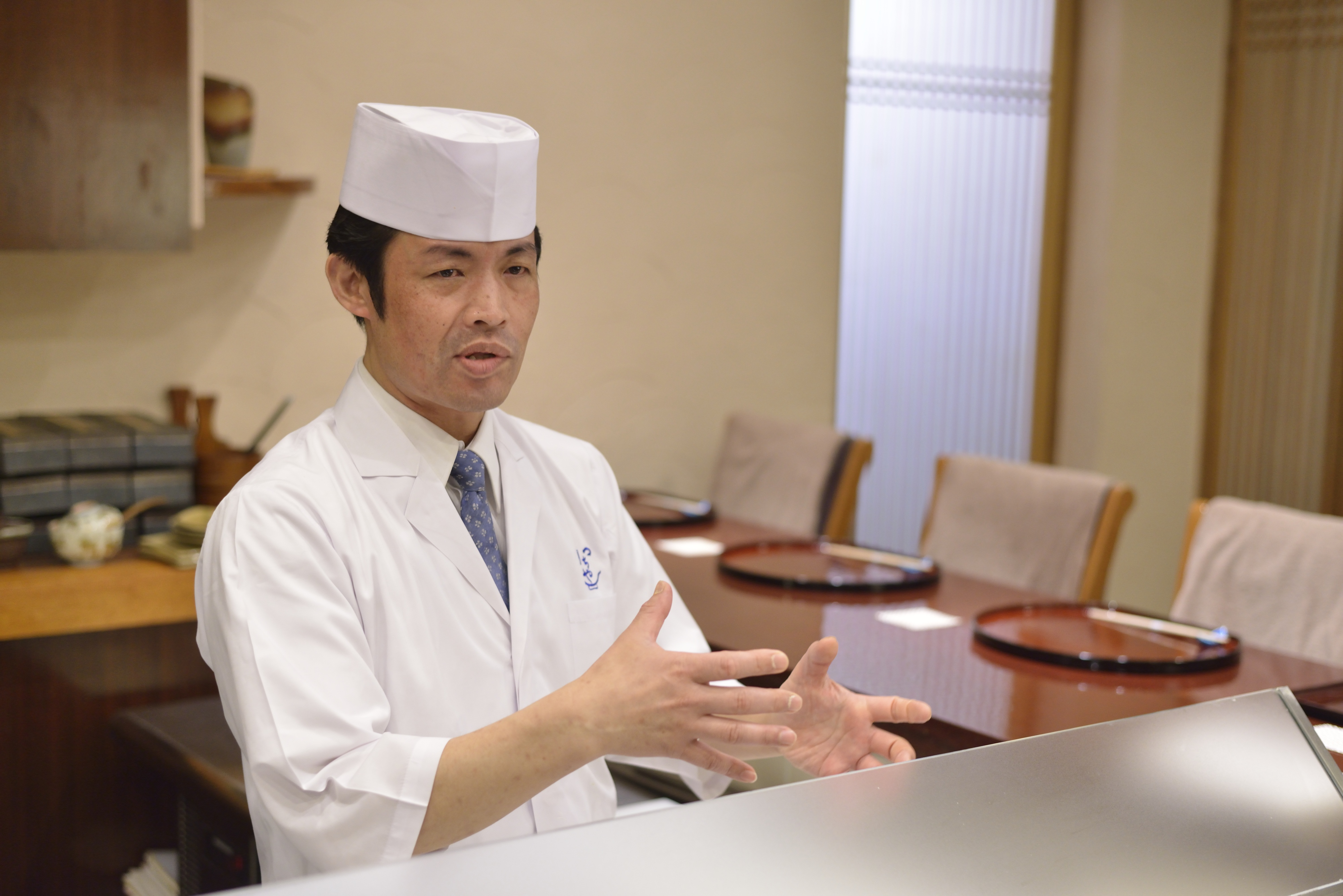 At the age of 18, he meets a mentor for life

When did you first start working in a restaurant?

Mr. Tsuchisaka:
When I was still in cooking school, the dorm introduced me to a part time job at a high-class Kushiage (fried meat and vegetables on a skewer) restaurant.  That was the first restaurant I worked at.  The head chef had training with Japanese cuisine.  The restaurant served Kushiage and Japanese dishes.  The head chef was Muta-san, my mentor for life who I refer to as “Master”. Today, he runs a sushi restaurant called “Sushi Muta” in Kyomachibori (Nishi Ward).

So you met a mentor named Muta-san.  Mr. Tsuchisaka, you are 44, so this was 26 years ago.  When I think about the world of Japanese food, I get the impression that people start as “errand boys” and must work very hard to get anywhere.  What was it like when you started out?

Mr. Tsuchisaka:
You are absolutely right.  Master was scary and strict.  He yelled at me countless times.  To be honest, there was more hardship than joy (laughs).  But looking back now, it was good because I wouldn’t be where I am today if I didn’t go through all that.  For instance, when I was being scolded by the master over and over again, many customers would say to me, “hang in there”.  I still remember those moments.  And some of those customers, even after 20 years, still come to visit me at the restaurant.

Wow, talk about strong bonds!  How long did you stay at that restaurant?

Mr. Tsuchisaka:
About 4 years.  It was something the master said that inspired me to go to the next restaurant.  He told me, why not take the next step and challenge yourself at a different restaurant?  But at the time, it wasn’t like he had a surplus of employees.  Rather, it must’ve been a risk for him to let me go, because I was starting to get the hang of things and was a valuable part of the team.  But he said, “I will take care of this restaurant.  You should challenge yourself at other restaurants and learn more things”.  He looked after me like I was his child.  That really got to me.  And so, I decided to switch restaurants.

Mr. Tsuchisaka met Mr. Muta, his mentor for life.  Mr. Tsuchisaka says Mr. Muta was always there for him throughout his career as a professional chef.  At every turning point in his career, Mr. Muta gave him a gentle push on the back.  He played a very important role in Mr. Tsuchisaka’s career. 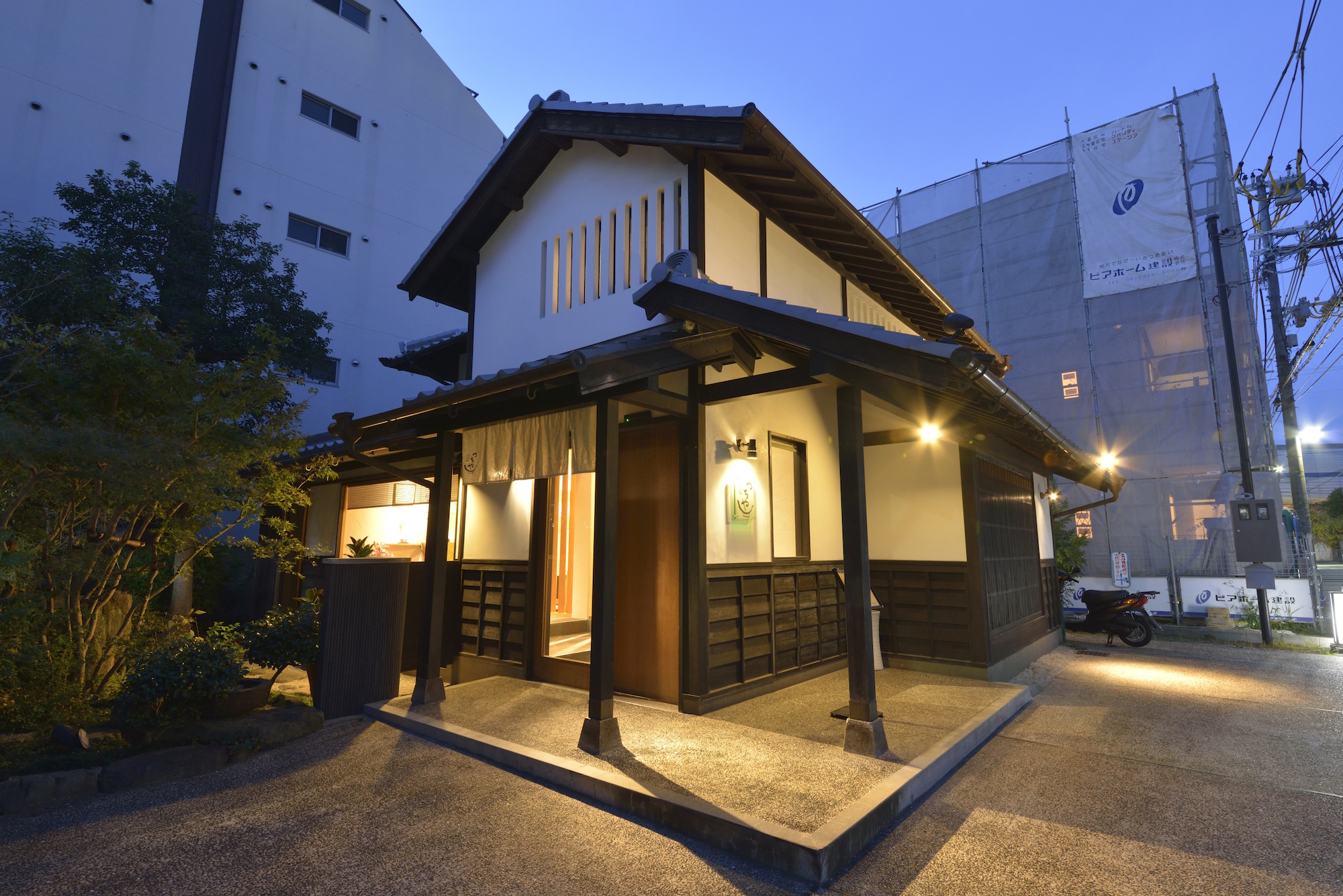