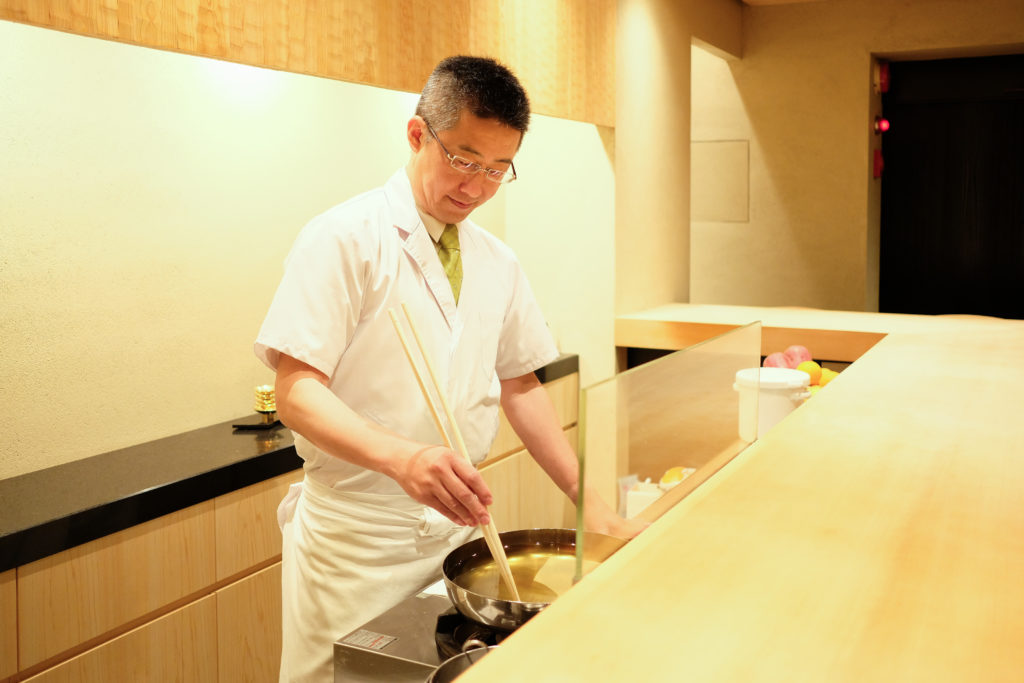 His persistence towards “Kyoboshi” as a Tempura chef

Could you explain your persistence of “kyoboshi” more in details?

Mr. Sakakibara
If you are asking me about the originality of “Kyoboshi”, it is “oil” and “home-made salt” which were inherited from my father and grandfather. No one knows the compounding ratio but me. Everything is only in my head. I didn’t tell even my wife or my mother who passed away the end of last year.

How I make my restaurant original is to make customers feel comfortable and enjoy their food slowly. There are 9 seats and they are all at the counter. I only made the counter tables because I want to serve food in the right time.

There are 9 seats but I don’t take reservations till fully reserved as long as they are chartered. If they are a group of two customers, I only take 3 reservations. I want to keep one seat away in between so that each group can enjoy their food in a private atmosphere without being bothered.

I often hear that Tempura cooking is difficult. Why do you think is it?

Mr. Sakakibara
That’s a difficult question. It is actually very difficult. Depending on the ingredients, the ways of cooking are totally different and even the same ingredient, each one of them is different.

I have to judge the temperature of oil and length of heating with my sensation which has been developed throughout my experiences. It may be a strange way to say but we, the professional chefs, have eyes in the oil. Probably this sensation may be understood only among Tempura chefs. There are many special sensations in Tempura cooking which can’t be seen in any other cuisines. This may be the reason why people say “Tempura cooking is difficult”.

The information in the oil can be communicated to my right hand from large cooking chopsticks. When you pick up ingredients with chopsticks, I can get the subtle doneness. This kind of sensitive details can`t be written in language and manuals. This kind of sensations are required I think.

What is the “Tempura” you think?

Mr. Sakakibara
Tempura is basically made with vegetables and fish and seafood and meat from birds and animals are not used. There exists that some different ingredients like exclusive beef deep-fries but they are only deep-fried dish for me and not Tempura.

I think it is ok to be creative but I don’t think it is good to play the eccentric artistic too much. My Tempura means to cherish the way of cooking that you can taste the ingredients themselves neatly.

New ideas of Tempura cooking can`t be made up that easily when you want to think. These kind of things come up suddenly one day. I make these ideas into actual food and bring it to the level which customers satisfied with them. However I struggle a lot because I keep the simple basics of Tempura cooking even when I do it. Based on what I have acquired, I try new things. That’s how cooking should be.

Where can you see the difference in Kyoboshi from other restaurants?

Mr. Sakakibara
It is where I satisfy my customers with only Tempura. There are some restaurants that say they are Tempura restaurants but still serve some other different food in course menu. There may be some Sashimi and simmered assorted food. Of course, I don’t say it is wrong.

This is my personal opinion but as Kyoboshi’s pride, I need to fight with only Tempura. Customers visit our restaurant to eat Tempura, so serving other food means I run away from “Tempura” for me. My restaurant is worth to visit if I compete only with Tempura. As I put as much effort in Tempura, I can develop myself as a Tempura chef.

I serve 18 dishes in 1 course menu in Kyoboshi. Everything is Tempura. I think of the compositions and skills not to make them boring. It may be easier for me to take in other different food but I don’t do this. That’s why, it is still difficult. 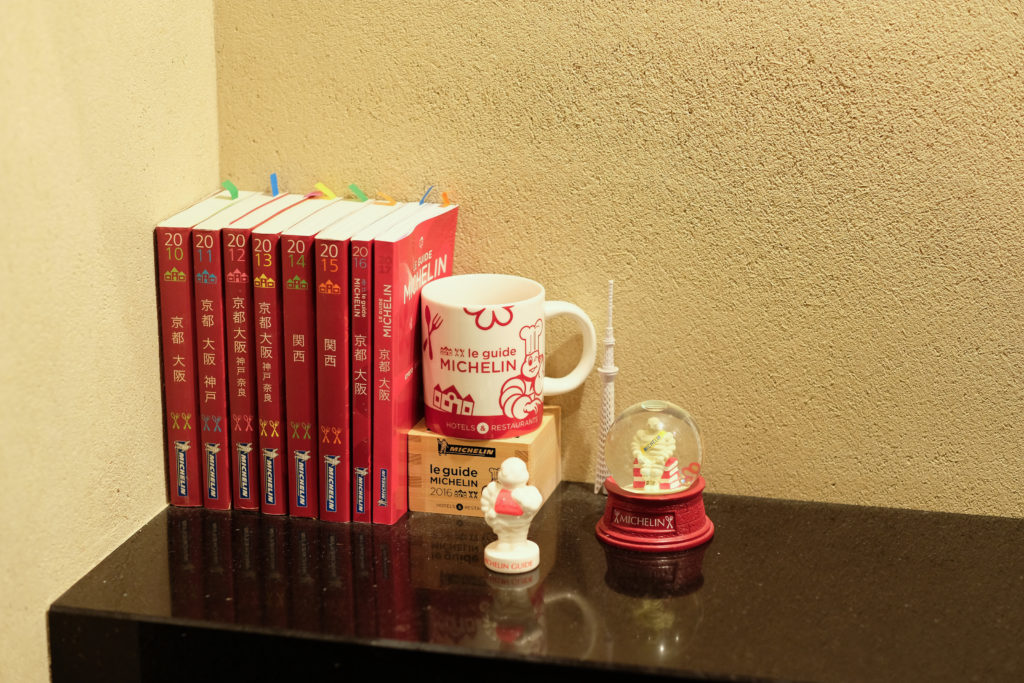 How he thinks about Tempura which is becoming world-wide food

Do you think of taking on apprenticeships?

Mr. Sakakibara
I don’t mean I don’t want to take on apprenticeships but I haven’t met anyone who seriously wants to be an apprentice.
I had a chance to think of taking on some foreign people who wanted to be apprenticed. I looked through the translated letter and CV and felt the enthusiasm but when I looked at his work experiences, I found out that he moved to different restaurants one after another in every three to four months.

In my sensations as a professional chef, you can’t learn anything such a short period of time. You need to learn the change of the four seasons at least one year to say that you have apprenticed. I can`t let anyone to say that “I learnt in Kyoboshi” after only some months of apprenticeship.

At the same time, do you have a lot of foreign customers?

There are many returned customers among foreign customers. Same as sushi, Tempura is one of the representative Japanese food and one of few dishes that can be understood in Japanese, “Tempura”. I really appreciate that Tempura is acclaimed world-wide. Also, I sometimes get an invitation to perform Tempura cooking in hotels in overseas. 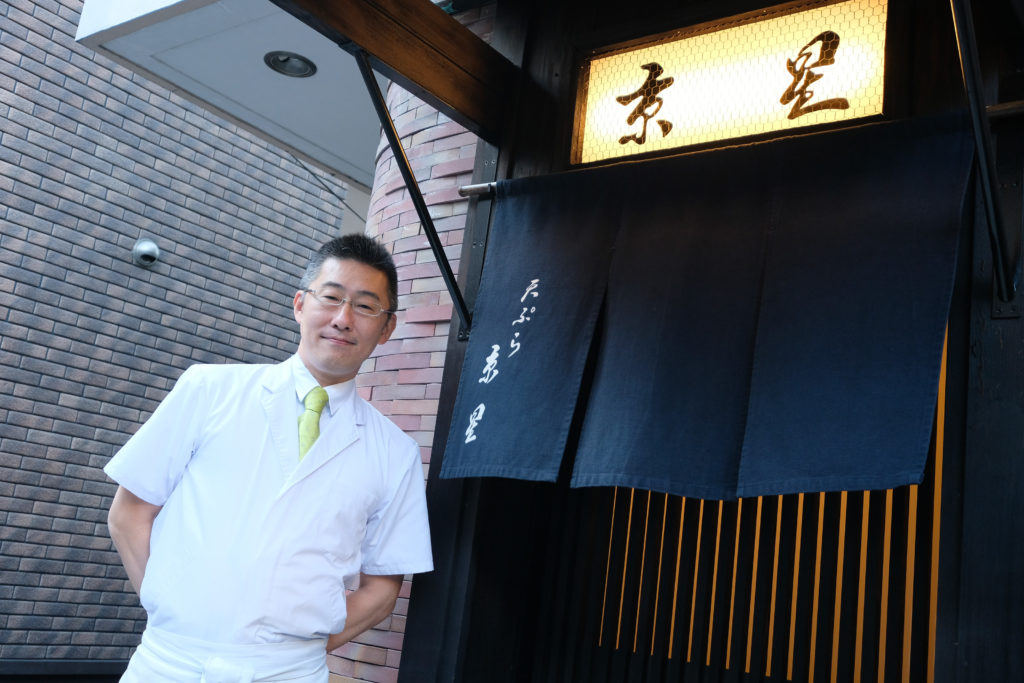 The meaning of protecting the long established restaurant which has passed down three generations.

Please tell me about your goal for future.

Mr. Sakakibara
The first thing is to be healthy. “Kyoboshi” is only my wife and my restaurant. There is no substitute to run the business. I need to be healthy to satisfy our customer’s expectations. I don’t really think about expanding my business or having a new branch. As I said earlier, Tempura restaurants can be only sustained when there are professional skilled chefs.

My rewarding from work is that our customers say “delicious” from the bottom of their hearts” when I serve food. I can feel their reactions directly from the counter so I can’t take any second best.
Also, my restaurant can compete only with Tempura so customers will know if the quality is low. I want to keep the best quality dish and serve them at the best timing and, make customers satisfied truly.

I can’t really say at the moment about the fourth generation. My child is still too young. I need to work hard the next 20 years until he grows up.
However, I do think I can`t terminate this “Kyoboshi” the half way through at my generation which has been continued three generations. If this was established by myself, I would end at anytime. However, I can’t do this. As long as we have customers who look forward to Kyoboshi`s Tempura, I want to answer to their expectations.

Finally, please give young workers who work in food industry a message.

Mr. Sakakibara
You can’t continue no matter what ways you want to pursue, like Sushi or Tempura. There is so much attractive stuff in the world, and you may have a roving eye on many different things but if there is a way that you like, I would like you to trust it and pursue the way.

In my case, as I explained earlier, I didn’t have any selective and had no choice but pursue the way as much as possible. However, I think it was a good thing for me. I struggled as much as I became insomnia and had too much pressure on myself but I was able to pursue my way as a Tempura chef for the past 26 years until today because I love this job.

I am sure that everyone will struggle under various pressure or stress. However, that’s the way that you chose because you love it. So, I would like you to recall the feeling. 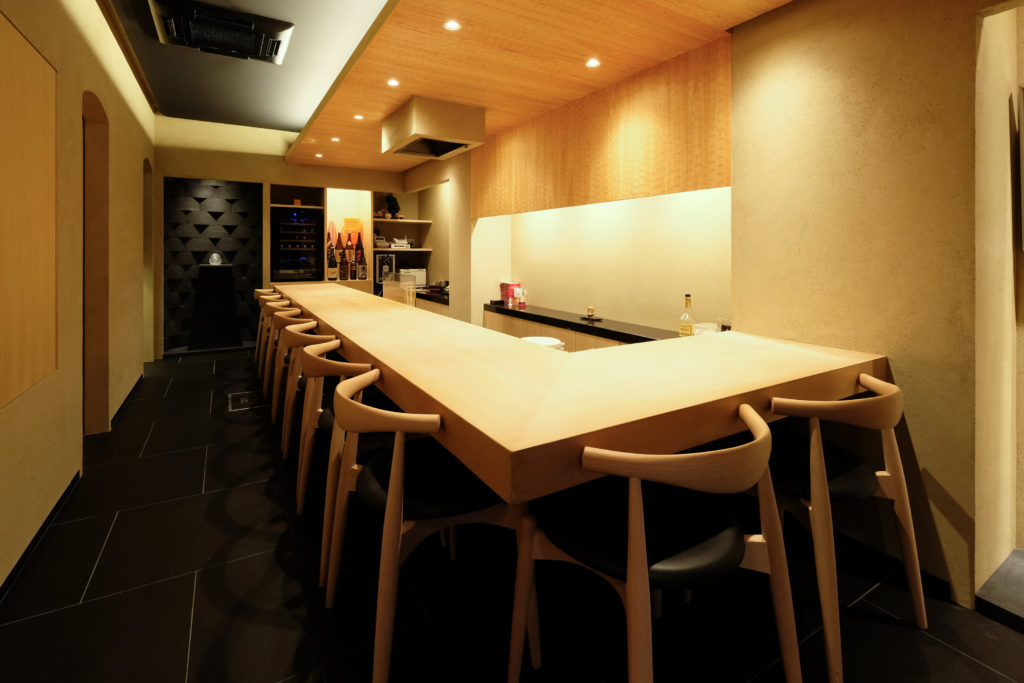 "NanachomeKyoboshi" which is known for an executive long established Tempura restaurant, "Kyoboshi" in Ginza which I interviewed this time, I was welcomed by Mr. Sakakibara and his wife with a warm welcome.  His apprenticeship time when he overcame the hardship of being left-handed.  The time when he became a head of the restaurant and overcame the emergency situation where his father had a brain infarction, and after the bubble economy burst when he ran the restaurant while working part-time. It was his history as a third generation where he was not protected by the name of "Kyoboshi" but struggled so hard to protect the restaurant. However, I didn’t see any difficulty from how he was and his face expressions during the interview. I had an impression that he answered each question precisely and talked about his deep perception of Tempura. I thought I was able to see how he faces the motto of his Tempura cooking which is "precise work and cherish the basics" in his humanity.
Prev Page
Next Page