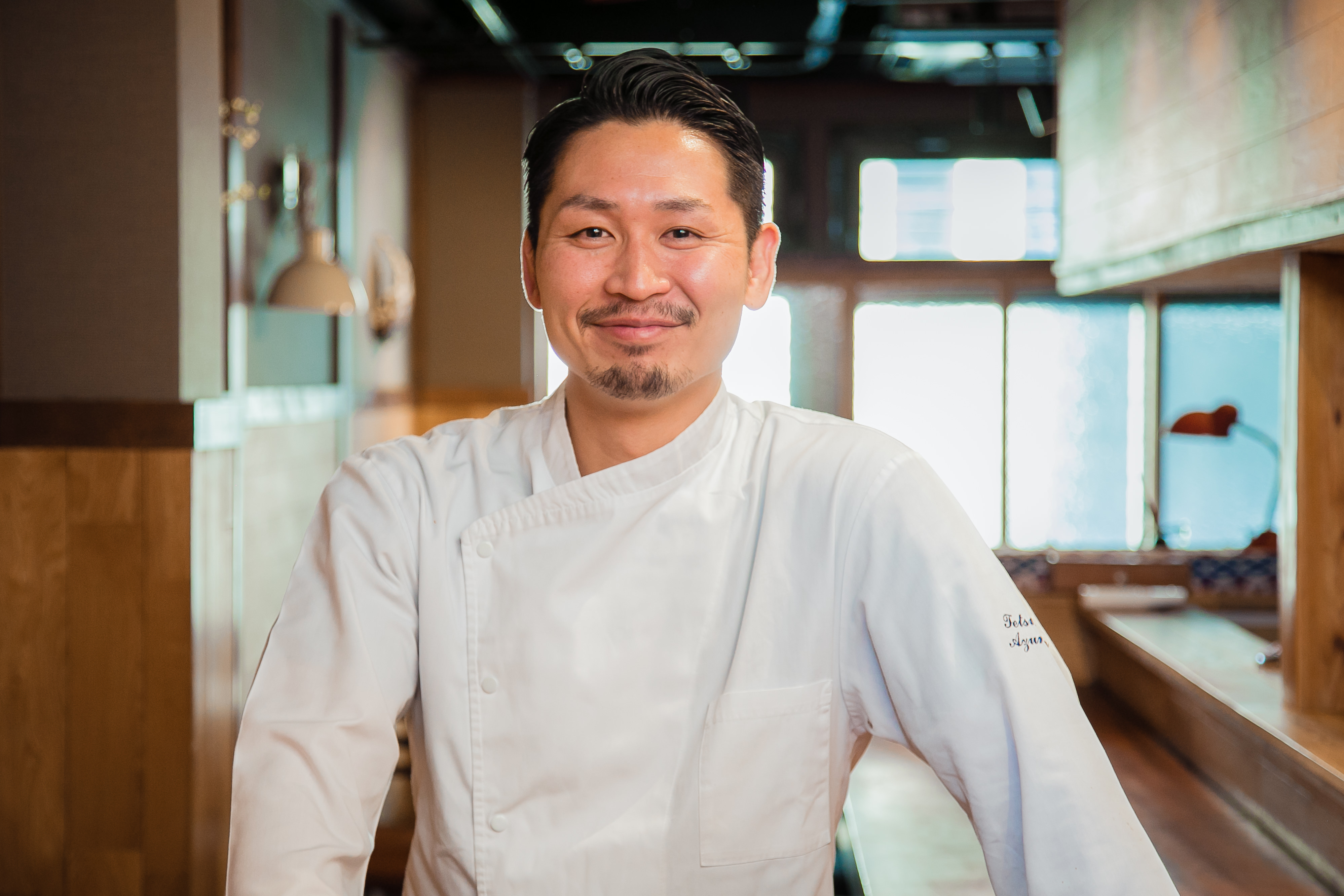 aca 1°, a small Spanish restaurant, is located near Karasuma-Oike in Kyoto.
Featuring modern Spanish crafted by adding the creative ideas of the chef to traditional Spanish cuisine, it earned one star in the 2017 Michelin Guide. This brilliant achievement, which was a first for Spanish cuisine in the Kyoto/Osaka area, was accomplished in the restaurant’s third year.
He says that there is no end to the things he wants his customers to try. Where does his passion come from? I took the opportunity to dive into his background. 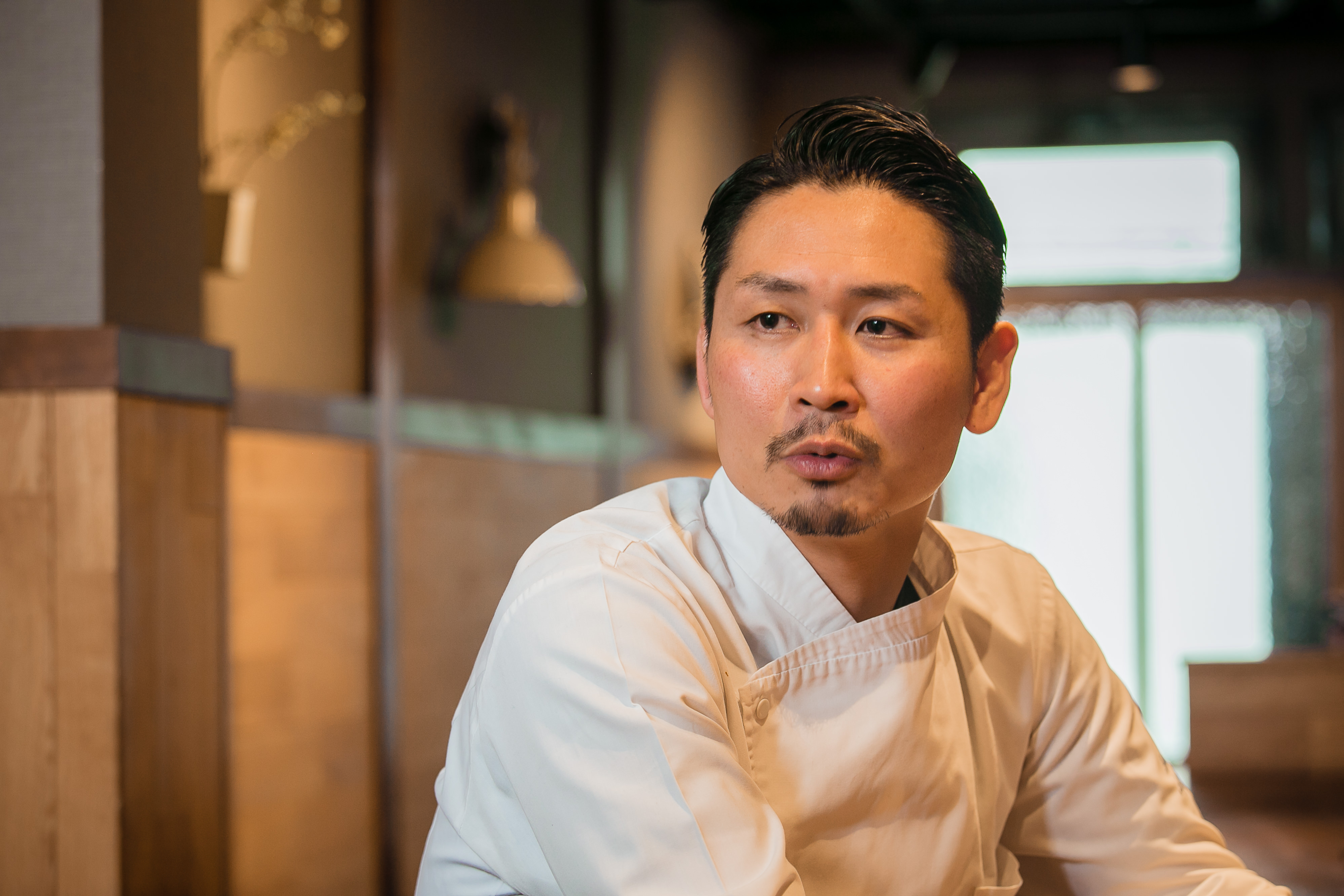 Early years: Thinking of becoming anything but a chef, and meeting Spanish cuisine

How did you become interested in the culinary field?

Mr.Azuma:
It’s a bit embarrassing but I used to think that I would become anything but a chef.
The reason was that when I was working part-time in Chuo Ichiba (central market) in Kyoto while dreaming of studying abroad, the chefs that came to the market were very scary.

It was a part-time job at the fish market, but the people that came to the market early in the morning were all drunk chefs. I could not think highly of them at all and I never thought of becoming a chef myself.

Then how did you enter the restaurant industry?

Mr.Azuma:
I was thinking about going to high school on the recommendation for baseball, but I was also interested in wrestling under the influence of my brother, so I joined the wrestling team in high school. I was putting a lot of effort into it that, even aiming for Olympics.

I was thinking that in the future I’d go to a physical education college and become a P.E. teacher, policeman, or join the Self-Defense Forces.
But I injured my knee and was unable to make a splash at the last high school competition. It became difficult to continue playing. I was thinking of either going to school or working, and I decided to study abroad as English would be necessary in the future.

I was in Canada from age 18 to 20, coming back for the coming‐of‐age ceremony, and I wanted to study more so I worked a part-time job at Chuo Ichiba to earn some money. I extended for a year and a half so I spent three and a half years studying abroad.

And you decided not to become a chef during that time you were working.

Mr.Azuma:
Exactly. I actually wanted to study abroad longer but due to my family situation, I returned to help their business when I was 22. My father was managing a company that sold auto parts and I and my brother decided to help out.

At that time I started living by myself, so I started cooking. I did not have much money, and as I cooked for myself every day I started to realize that cooking is fun. Before I knew it, I was hooked.

It seemed very fun to buy ingredients, cook, and have people eat it. The culinary field was one that I had hated, but I decided to challenge my thinking. Then I worked at a Spanish restaurant called La Masa.

Why did you choose Spanish cuisine?

Mr.Azuma:
I was 25 years old when I decided to become a chef. I had reached a certain age and I thought that it was not enough to do the same thing as everyone else. There are people starting their training at the age of 15 in the field of Japanese cuisine.

But French and Italian are both too popular. I was thinking which area I could use to brush up my skills, besides Japanese, French, and Italian. I eat at many Turkish and Greek restaurants, for example, and found that there are not many Mediterranean restaurants in Japan.

When I was studying in Canada, I visited a Mediterranean restaurant, and I remembered that it was very delicious. But for some reason there are not many in Japan. I wondered why, as it uses lots of vegetables and seafood that suits the taste of Japanese people. While I was thinking about this, I encountered La Masa, an old-style Spanish restaurant in Kyoto.

When I first tried it, all the food was extremely delicious. The ingredients, such as deep-water shrimp, livers of goosefish, bonito, etc., were all obtainable in Japan. There is no special ingredient, yet I was surprised that none of them was something I had tasted before. 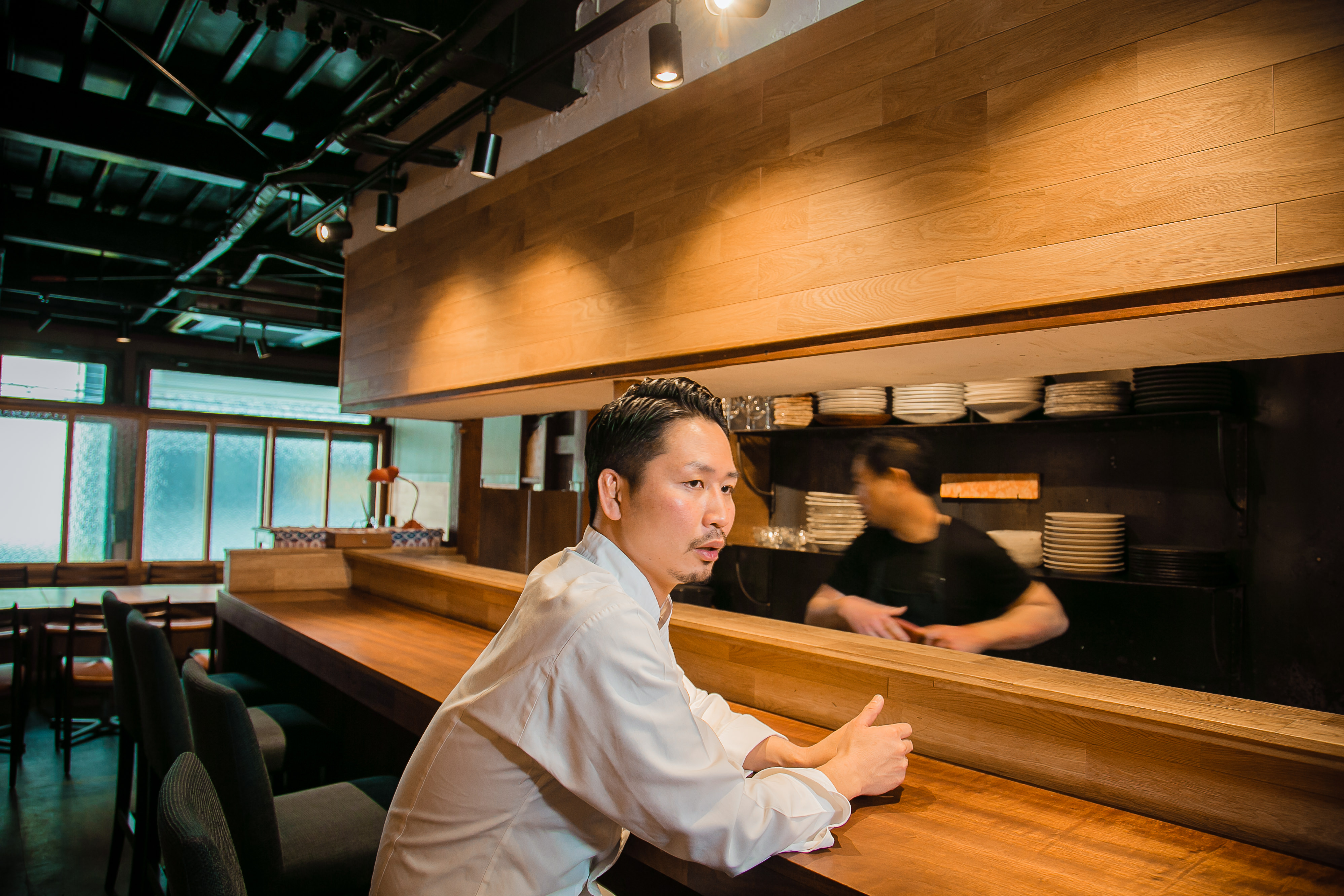 Feeling confident in work at a small restaurant after struggling, not being able to do as I wanted.

Mr.Azuma:
He’s got the Latin aura. He is really cheerful, and when I ate his food for the first time and said, “It is very delicious. So delicious that I’d want to work here,” he responded, “Okay!”

I thought the whole conversation was a joke at first, but after several days, he called me and said, “So when are you coming in?” I was surprised to realize he wasn’t joking.
He told me to come as early as the next day, and it was such a great chance for me as I was looking for a new job. I was happy and came out the very next day.

What kind of job did you start with?

Mr.Azuma:
I was an absolute beginner who didn’t know left from right, but soon I was running the restaurant with the owner. It was coincidental timing that an employee had just left and there was a whole lot of work to do, beginner or not.

I made a lot of mistakes and there were plenty of things that I did not know, but I just had to do it.
I was trained by the owner harshly but carefully. It was a great chance for me to grow up since I was given jobs that were above my ability.

So you learned cooking skills with Mr. Kinoshita, right?

Mr.Azuma:
It was not actually like that, and I was still not able to cook back then. Everyday was very busy and there was no extra time. In fact I was busy being scolded not only by the owner but also by the customers. I never thought that I could do any job by myself.

But the restaurant was doing well and in the second year, I was promoted to be the manager of the second restaurant. It was larger compared to the flagship, with experienced staff, but the work of the manager was very tough. I only knew La Masa so there must have been a lot of complaints from the staff’s point of view.

There were many staff members who were older than I was, and there were many times where I couldn’t handle their complaints. And then the third restaurant was opened, and then a fourth. It was a turning point for me, to move to this fourth restaurant.

Mr.Azuma:
The fourth restaurant, Fuigo, was a small restaurant mainly comprised of counter seats with a casual style setting it apart. The members were myself, another full-time employee, and a part-time worker, and I was tasked with starting to form the menu.

With a small restaurant, I was able to watch and see all the tiny parts and I felt a grasp of the work that I had never felt before. If you work in a big restaurant, your main job is management work, like managing shifts, but at Fuigo I had enough time to face customers.

I could pursue any ideas that would make customers happy, and that result reflected in our sales; sales increased just as I expected. 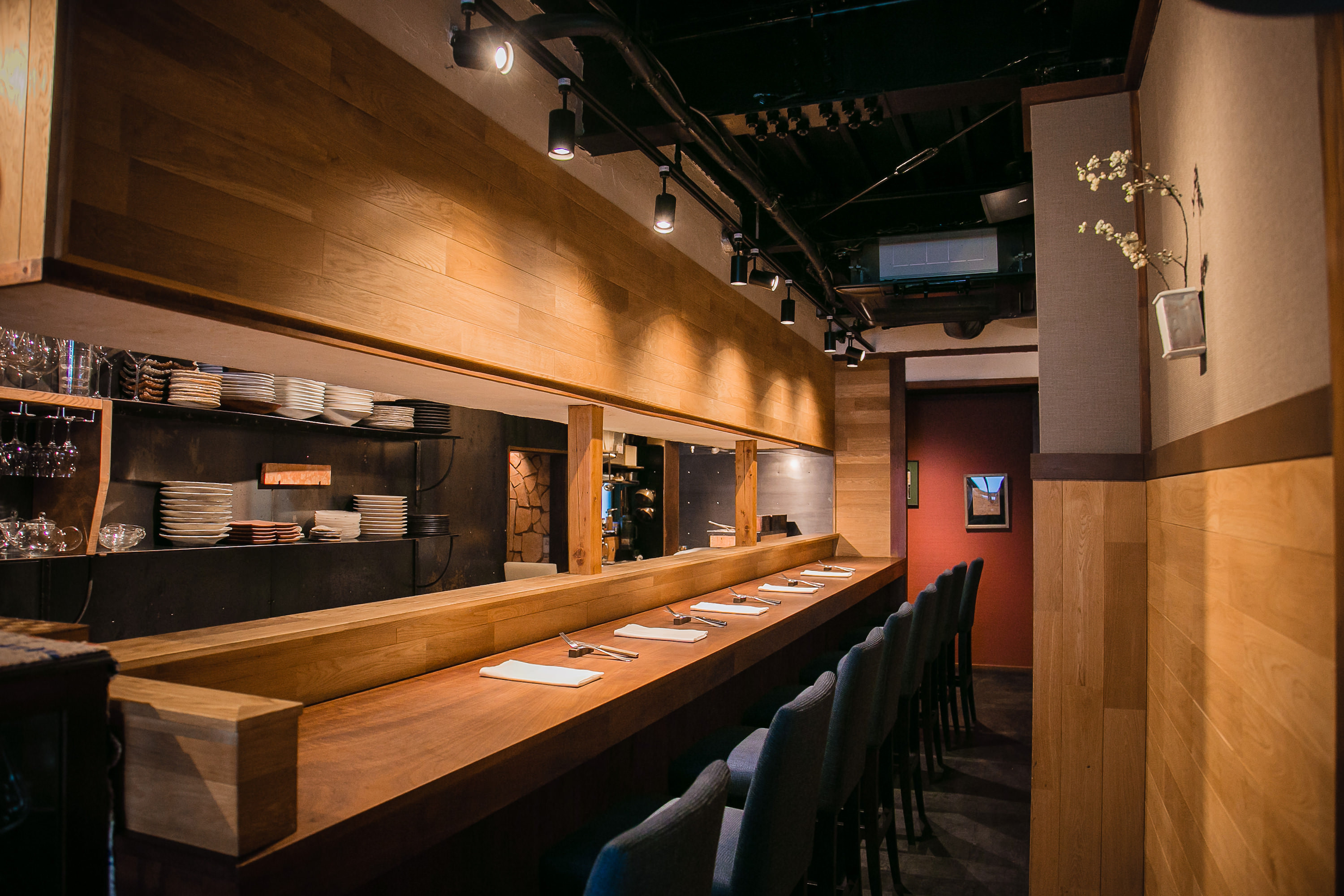