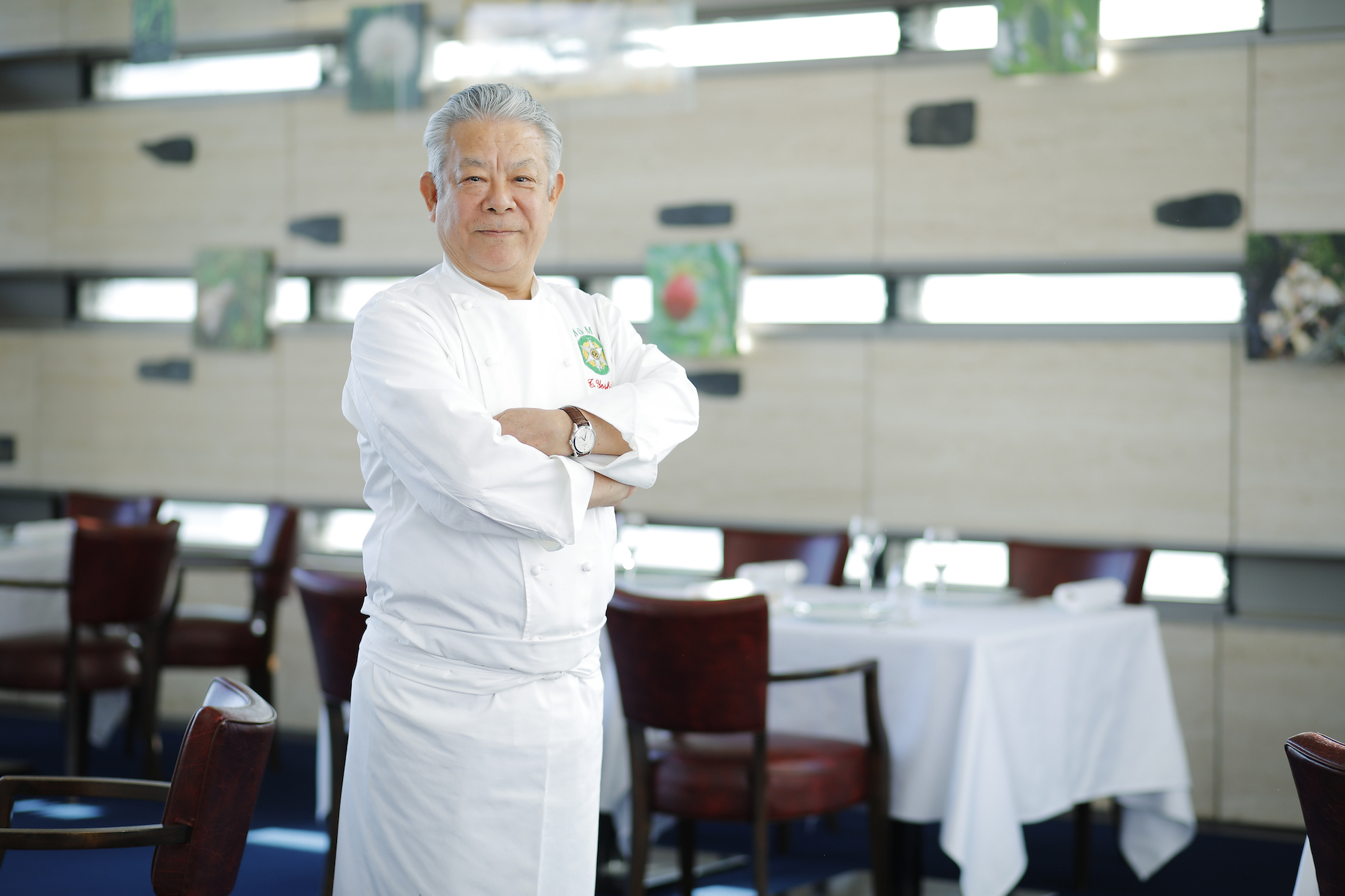 Tateru Yoshino started his career in culinary arts in his early 20s. With experience working as a chef for 40 years, he is still very active in various related fields today. Besides Restaurant tateru yoshino Ginza, he oversees tateru yoshino bis and Boulangerie tateru yoshino ty+ in Tokyo/Shiodome and La Tortue in Hiroo as a manager. Apart from that, it has also been more than 10 years since he opened hotel de yoshino in Wakayama prefecture. He also produced Maison tateru yoshino in Osaka and serves as an advisor to several restaurants in Naoshima, Kagawa prefecture, requiring him to visit these establishments once a month. We interviewed Mr. Yoshino on the story about how he became who he is today, and his plans for the future. 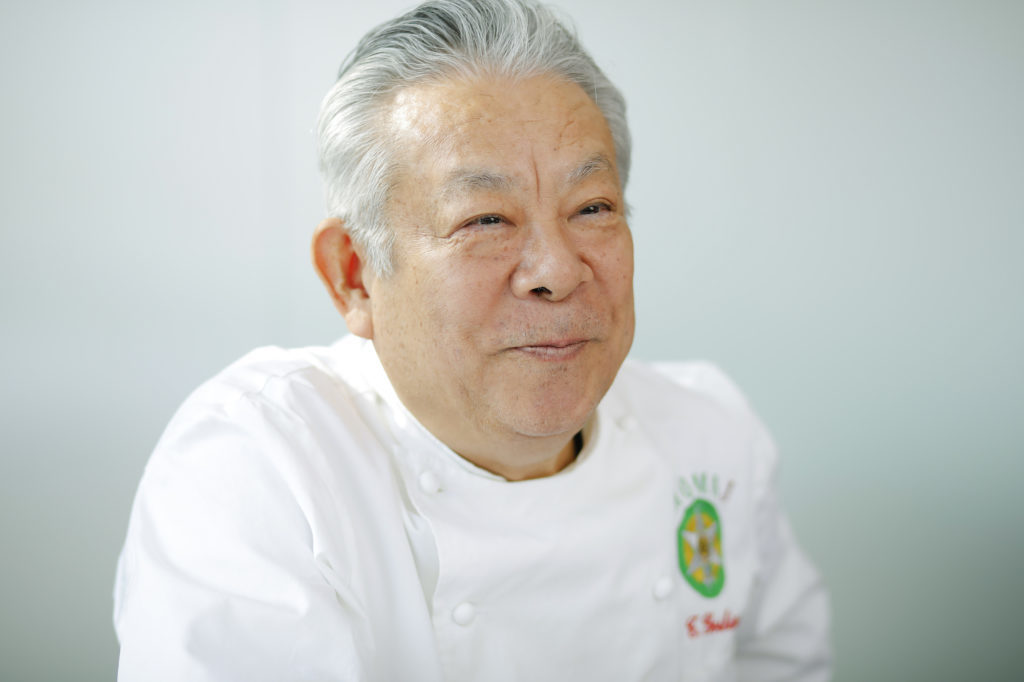 So you’re from Kikaijima in Kagoshima prefecture. Why did you decide to move out of the island?

Mr. Yoshino:
Originally, I didn’t plan to become a chef. My parents had a sugar cane farm and I always thought that I would take over the family business.

But when I was in 2nd grade in elementary school, I hurt myself when using the exercise bar. At that time, I was brought up in “the style of Japanese swordsman Satsuma Kenshi Hayato” and even if I hurt myself, I wouldn’t pay much attention to it. I didn’t tell my parents how much pain I was in and left my arm as it was without going to the hospital. However, my relatives found out about it during a Buddhist service and they made a big fuss.

As I didn’t treat my arm immediately after it was broken, my injury took a worse turn and at one point, the doctor even informed me that I may have to amputate it. Fortunately, we were told there was a very good specialist in Kanagawa so we went there to seek treatment.

Consequently, I lived with my aunt in Shin-Marukuo in Kanagawa prefecture for two years where I attended elementary school and went for regular treatments at the hospital. My family took me to see Tokyo Tower, the Buddha Statue in Kamakura, Hikawa Maru in Yokohama, etc. It was an exciting time for me with plenty of new stimulation.

After completing the treatment, I returned to the island. However, from that experience living in Kanagawa, I knew I wanted to go back to Tokyo. After graduating from high school, I joined the Ground Self-Defense Forces just to get out of the island.

Your first job was in the Self-Defense Forces! How did you go from that to a career in cooking?

Mr. Yoshino:
With the Self-Defense Forces, I was stationed in Kagoshima and Hokkaido but when I was almost 19, I knew my heart was in Tokyo. I asked my aunt if I could live with her in Shin-Maruko and she agreed. But I didn’t know what I wanted to do in Tokyo.

Initially, I got a job at an electricity company thanks to my aunt’s connections but I quit soon after because I thought it wasn’t a perfect fit. My aunt was fed up with me so she kicked me out. So I took up a newspaper delivery job which came with free lodging.

I delivered newspapers morning and night but thanks to the training I received during my time at the Self-Defense Forces, I still had plenty of energy left at the end of the day. I also had a lot of time, of course. One day, I saw an ad looking for waiters in the classifieds section of the newspaper so I applied for the position.

How did you become a chef after working as a waiter?

Mr. Yoshino:
Being a waiter was a great fit for me and I really enjoyed the work. But it wasn’t enough for me to just serve food. Actually, I have another aunt who managed a cafeteria in Kikaijima and growing up, I watched her work all the time. I also liked making things with my own hands. Therefore, I decided that I wanted to have a job which allowed me to create something so I decided to become a chef. This is how my career as a chef started.

How was your initial experience working as a chef?

Mr. Yoshino:
I worked in a team of three chefs at the first Western-style restaurant I worked at. I was responsible for various tasks and it was very fun. At that moment, I knew it was what I wanted to do as a career. I thought that if I gained five or six years of work experience, I could go home and open a restaurant near my parents. In the end, I didn’t go home, though.

After working at the first restaurant, I worked several years in several other restaurants, such as Coq D’or, Fairmont Hotel, and Regence. At all these restaurants, after working for a period of time, I found that something was lacking and wanted something more. My personality is rather blunt and when I voiced my opinions to my superiors I was told that I was impudent. When that happened, I would think that they were so mediocre and seethe with anger. Then I would quit (lol).

I also got married between that time and one day, my father-in-law asked me, “Yoshino, why don’t you start a restaurant?” I appreciated his comment but I knew that I didn’t have the ability yet. If I were to start a restaurant, I wanted to see with my own eyes how restaurants were designed, the tastes of the food, and the atmosphere of the restaurants. So I asked if I could go to France to do so, and I did for a month. 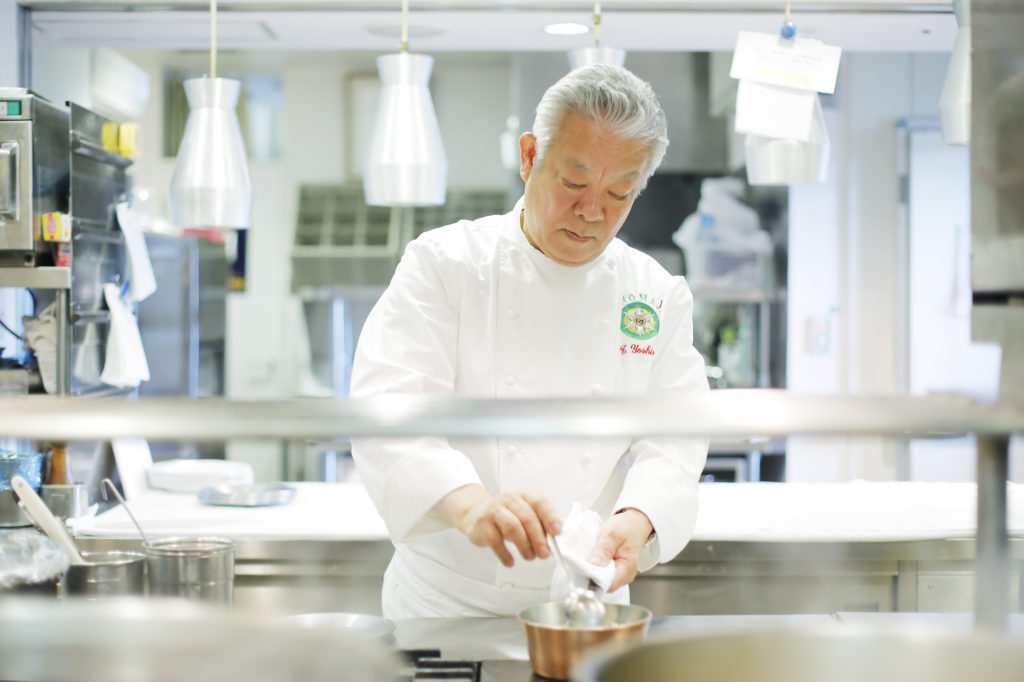 A field trip to France before opening a restaurant. Taken aback by what he saw, Yoshino decided to stay for the next four and a half years.

How did you register the things you saw and heard in France?

Mr. Yoshino:
I dined at Michelin 2-star and 3-star restaurants and these experiences really gave a shock to my brain. I realized that what I had done until then was just imitation and the real thing was just spectacular, way beyond my imagination.

I was convinced that I couldn’t start a restaurant with my level at that time. I knew I had to study in France. Initially, I went there for a month—sort of like a holiday-but my stay was extended by a long time.

How was your experience living in France?

Mr. Yoshino:
I got an interview through connections but I didn’t understand the language so I didn’t get the job at that restaurant. I received another introduction and I started to work at a bistro with about 300 customers coming and going every day. It was around the 10th day I arrived in Paris. I didn’t think I had time to waste.

However, after working there for about two weeks, I thought that the bistro wasn’t the right place for me. But I had to make a living so I just persevered.

I was quite skillful and after about two or three months, I started to voice my opinions on the subpar taste of the food and asked them to let me try to make it better. As a result, they actually allowed me to work as a proxy chef in the kitchen. I enjoyed my work in the kitchen and the pay was good. But it wasn’t enough for me, and I didn’t want to get sidetracked from my ultimate purpose so I quit after five months.

After that, I worked in several other restaurants, gaining experience along the way.
Actually, shortly before I left Japan, I had a referral letter addressed to Joel Robuchon. Before I left France, I handed it to Mr. Robuchon and subsequently interned for two months at Jamin.

*Joel Robuchon and Yoshino
Joel Robuchon is known as the best chef of the century. He received the M.O.F Award (The most prestigious award given to the best craftsmen in France.) at age 33. He also obtained a Michelin 3-star rating in the shortest amount of time in history. Although he retired at 51, he still influences and continues to lead the world of culinary arts.
Mr. Yoshino and Mr. Robuchon met when he was invited to go on a cooking show twice during his time as a manager at Stella Maris in Paris. To Yoshino, Robuchon was somebody who recognized his cooking and a mentor in his mind.
Robuchon passed away in August 2018 at age 73.

Did you have a tough time living in France?

Mr. Yoshino:
When I was young, I had a very serious arm injury. Life in France was nothing compared to that.

Not even once was I bullied by the French. On the contrary, I may have bullied some French people (lol).

Even if the person I was talking to were French, I said exactly what I wanted to say. At one of the restaurants, I was told that “Japanese people can’t work and don’t even understand the language,” and that person even shoved my head. At that time, my pride couldn’t take it so I punched him back (lol).

To begin with, most of the time, I get bullied in the kitchen because I didn’t do a good job, didn’t work hard enough, or just lacked something. Therefore, it wasn’t just the problem with French people. I was also responsible for my mistakes. Of course, it was also important to assert oneself.

Why did you decide to come back to Japan?

Mr. Yoshino:
After working at a few restaurants as a chef for four and a half years, I gained the confidence and thought that it was about time I returned to Japan to become a chef and start something myself.

Not only that, I wanted to see my mother. In my four and a half years living abroad, I only sent one postcard to my parents. That’s why my mother always told me she had health issues because she worried too much about me. When I went back, I naturally went to see her immediately. I remember that when she saw me, she said, “Look, you are alive.” 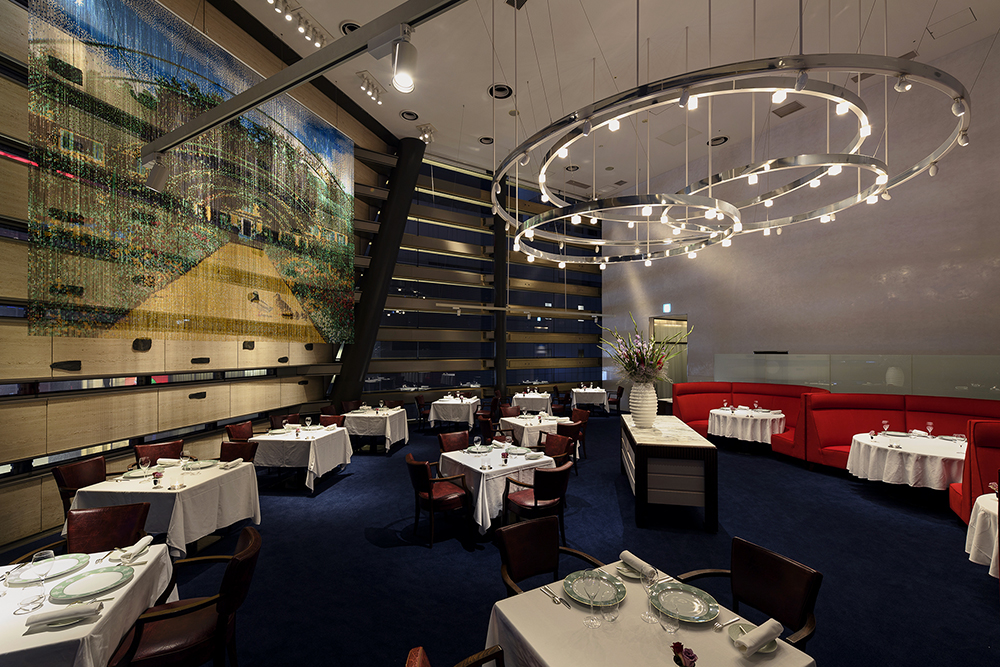