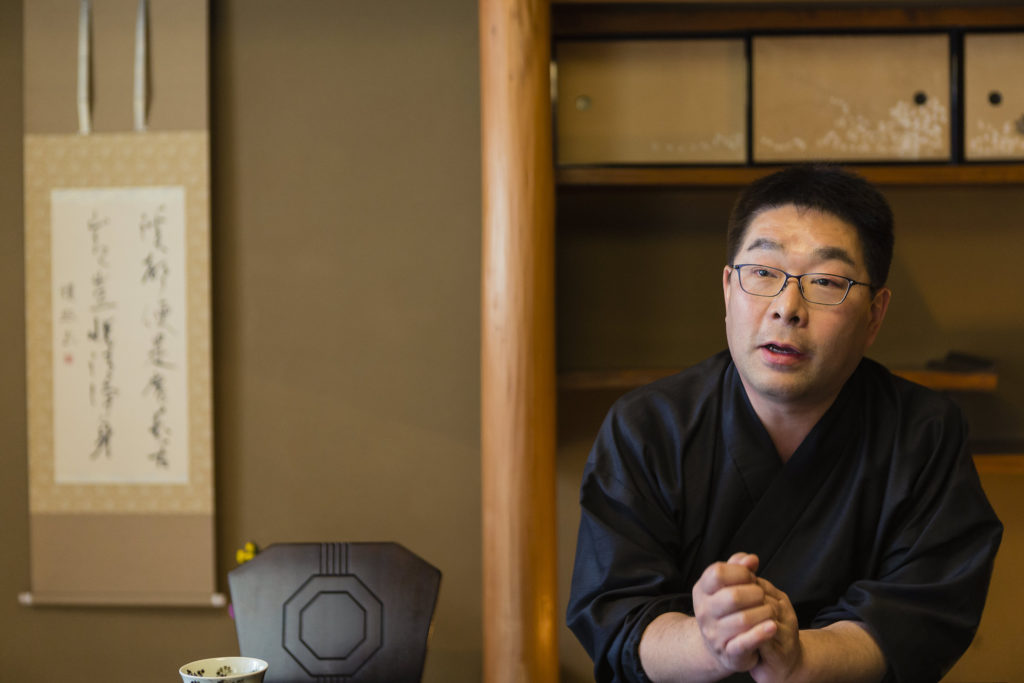 Your restaurant’s speciality is not only sweetfish dishes but also the bear hot pot. How was it created?

Mr. Ito :
It’s been about about 20 years since we produced the bear hot pot. I took a lot of care to show in the media that the ingredient itself is unique. It took about 10 years until customers accepted it.
I have gotten interview offers frequently for a long time now. I used to decline every offer at the beginning, because I thought the bear hot pot was too unique to popularize. I didn’t want the media to promote it to the public, because it is very unique. I wanted to share the fact that this is an excellent ingredient in the right manner. As I avoided being the media, it took long time to promote it. But tasty food has its own power, so it became popular gradually through word-of-mouth. It is also important that the understanding of gibier cuisine has grown in the last decade. Until then, it was not at all commonplace to eat deer or boar meat – and even bear meat!

Didn’t you have concerns about continuing to serve the bear hot pot for ten years?

Mr. Ito :
I was certain that people would accept it eventually.
It was very gradual, but I got positive responses and could feel it being accepted. The feeling became bigger and bigger every year. Therefore, every year during the bear hot pot season, I was very concerned that it might be very hard to get bear meat as it might become too popular…!
A leading customer who took care of me enjoyed the bear hot pot and supported me. I really appreciated it. 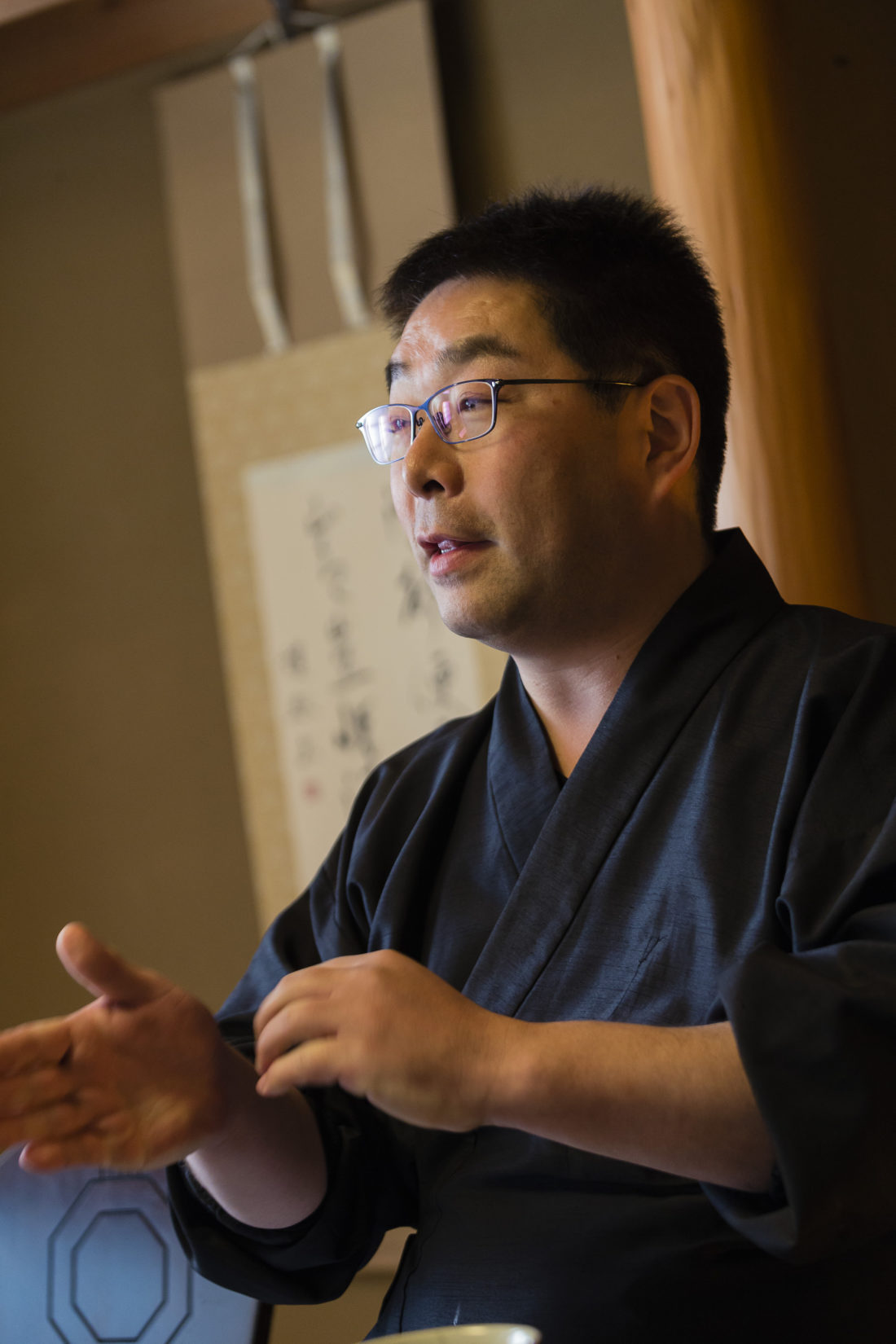 Were there any struggles or problems in the process of producing the bear hot pot?

Mr. Ito :
When I started the bear hot pot, we were always a lack of bear meat. Bears are a rare wild animal so it is not possible to buy them on the market easily.
Originally I started with a master bear huntsman. There has been networking between many hunters and I am able to have several wholesalers from which to buy meat now, but there was a time when I was only able to buy from a single person. I exploited the new distribution so it was very hard until we were able to create it. However, the relationship I created with these producers became the foundation of our bear meat cuisine and we have put a lot of effort into it, and as a result I can say that we are able to serve food that is found nowhere else. Then there are huge differences, good and bad, between wild ingredients and cultured ingredients. Therefore, it is quite hard to define quality ingredients. When buying low-quality ingredients, there is a limit to how you can make it taset better through cooking techniques. The ingredients must be at the greatest quality for our cooking. So there are some restaurants which serve bear meat now, but the quality is very different. I am confident about that.

What kind of bear meat is tasty?

Some customers ask me which region of bears are good or which gender is tastier but there is no answer to these questions even after 20 years of cooking bear meat dishes and handling hundreds of bears. I came across very good bear meat in the bad season, people said, and vice versa. However, the only season when extremely high quality bear meat can be found is right after a period of bad weather and an extreme lack of prey for bears. Those that survive under those tough conditions are very strong and wise bears.
What I found out after seeing many bears is that there is only good or bad in each bear. There are no rules or strict patterns. They are natural creatures, and it is not possible for human beings to control nature. What nature cultivates is beyond our calculations or expectations. I guess no one has seen bears more than I have. However, there are still some things beyond my expectations, right when I think there is no more to discover. When I think I have seen the best, I meet one much better. So in short, it is not possible to know this…! 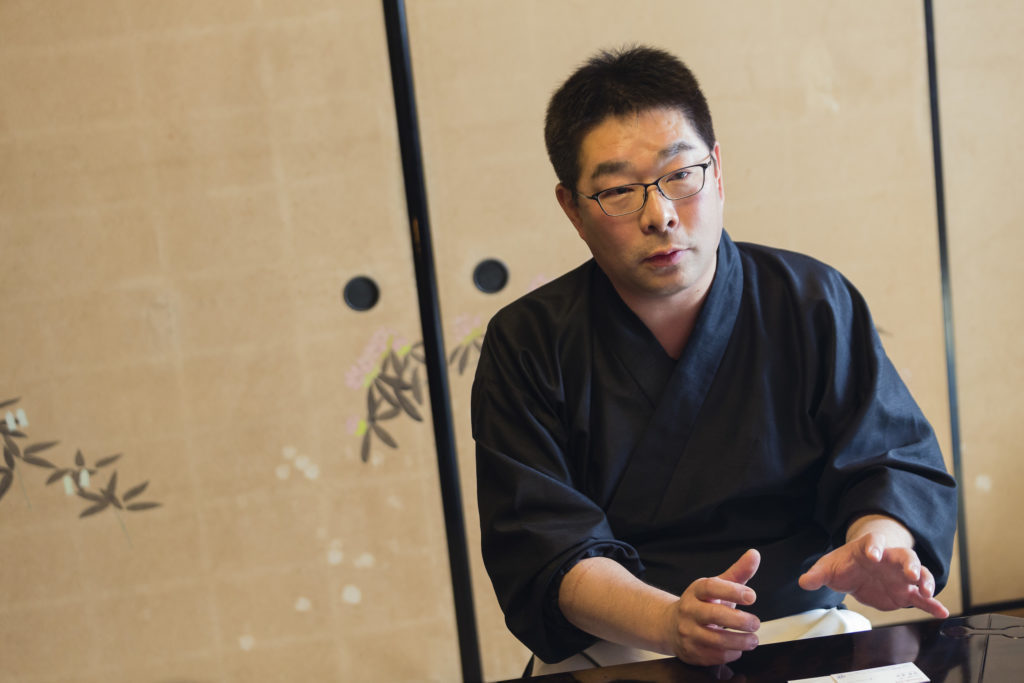 There is a difficulty and an attractiveness in these natural ingredients which are completely different from what human beings cultivated. Is there anything else you think is important when cooking?

Mr. Ito :
What I feel as I cook natural ingredients is that there is very little that chefs can do.
Of course, the cooking quality must be a core aspect, but what chefs can do in the process of getting the ingredients until cooking them as a dish is actually only a part of the process. For example, the process of sweetfish growing up after they are born is the most important part. And when it comes to bear meat, how we hunt and process them has a huge effect on the quality of the dish, despite there being a difference in each bear. There is a difference based on if it was hunted with one shot, how it was butchered, and so on. Even vegetables, if we think about the process of cucumbers or tomatoes growing from the seeds as a part of cooking, 90% or 95% of the quality of the dish is decided during that process. When you eat fresh vegetables, you can see how tasty they are. That’s what I mean. Farmers pluck them first, and chefs receive them then cut, cook, season… but chefs are involved in only a part of the whole process. Maybe about 5% or 10% of the whole process. I need to realize that the taste of ingredients are not something we created so we need to be modest about it. This is my standard in cooking.

Lastly, is there any dream or goal you want to achieve?

Mr. Ito :
We get som VIP customers, and I am surprised when I see their business cards.
They ask us about the dishes we provide. and ask me questions. I know about cooking, ingredients or bear meat better than them so I explain with pride!

I think being a chef is such a wonderful thing. Someone like me who doesn’t have much educational background is able to speak to these people at their level.
Hirasansou is in such a remote area and is a very simple restaurant, but I would like to do something that makes customers even more happy… I am now thinking about developing Hirasansou so there is another building under construction. I don’t really have a desire to have more customers or make the space bigger, but I would like to make a step to advance the business in my generation. That’s probably one of my missions as the next heir of Hirasansou. I would like to maintain the standard of the restaurant, which began with my grandfather’s generation, so I am now planning the construction of another building for preserving wines. It is supposed to be completed this autumn, and I hope people will look forward to it. 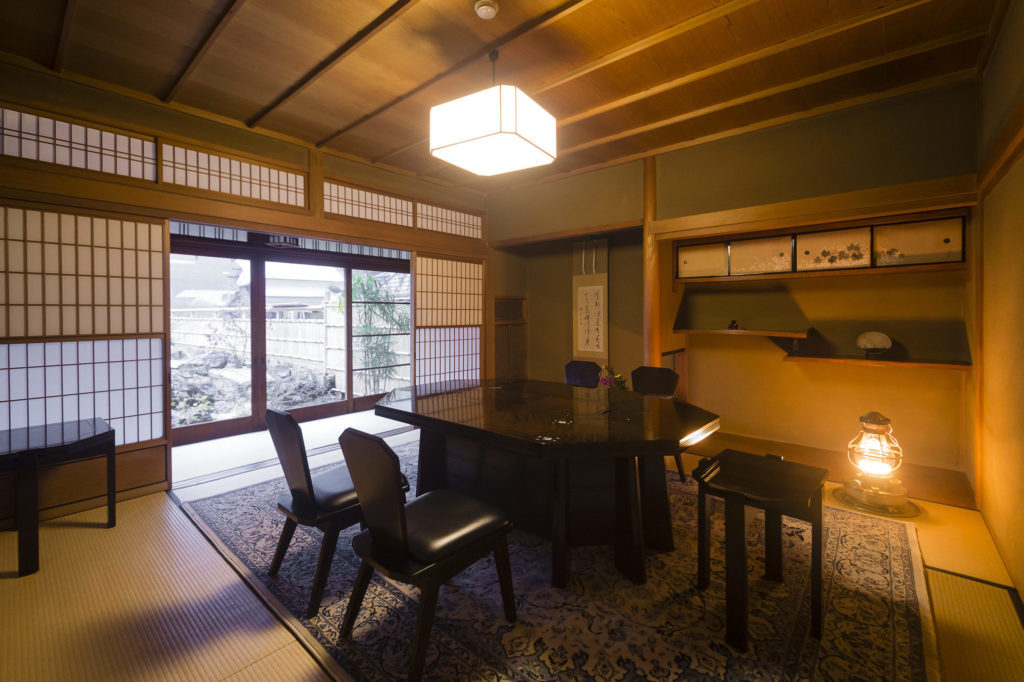 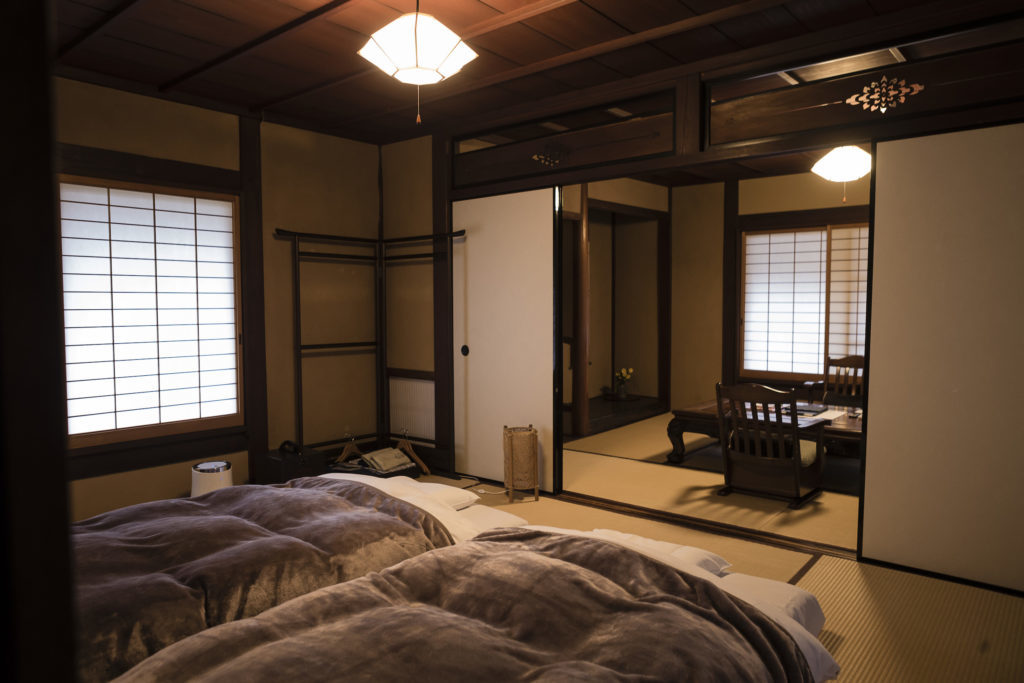 Some already know all about Hirasansou, when but a food critic named Yukio Hattori said on TV that he would want to eat Hirasansou's bear hot pot as his last meal, it left a big impression on me. Therefore, I decided to interview Mr. Ito as I was very interested in knowing what kind of chef would serve a bear hot pot. “I have been working at seeing things from the customer’s point of view,” Mr. Ito said. He is the third generation of Hirasansou, but as he mentioned in the interview, he is the one who developed the restaurant into such a popular place year-round despite its remote and inconvenient location. There are no convenience stores in the area and even we don't see many people out and about; such a remote location could be a real demerit of the business. However, he explains, "This place is so remote that people need to come all the way from their homes; they need a reason to come to this restaurant. That's why this location was best for me."  There are many gourmets from all over Japan and the world who visit Hirasansou to enjoy not only the food but also the value of the restaurant and the extraordinary experiences which they can only have here. There are many regular customers who are fascinated with Hirasansou. It is not easy to provide quality food to those who understand high quality.  As Mr. Ito mentioned, it took ten years until the bear hot pot caught on; his many years of effort, caring for each one of his customers after taking over his father's business, has paid off. In this interview, I felt I was able to hear from Mr. Ito about a kind of "reality of cooking."  Actually, Mr. Pascal Barbot and Alain Passard, both Michelin three-star chefs, said the same thing in the past Foodion interviews. It is a very interesting fact that Mr. Ito of gibier cuisine and these legends of the French cuisine have come to the same conclusion. An inconvenient location surrounded by nature channeled his culinary philosophy into a pursuit of natural ingredients and maximizing them in cooking. (I personally love this nature-filled area where there is nothing around!) Hirasansou's food reminds these modern people who destroy nature in the pursuit of convenience and who are surrounded by urbanization that they still have the chance to touch and feel the soil, and nature, and its power and greatness. I would like you to visit Hirasansou to feel Mr. Ito's cooking with your five senses.
Prev Page
Next Page 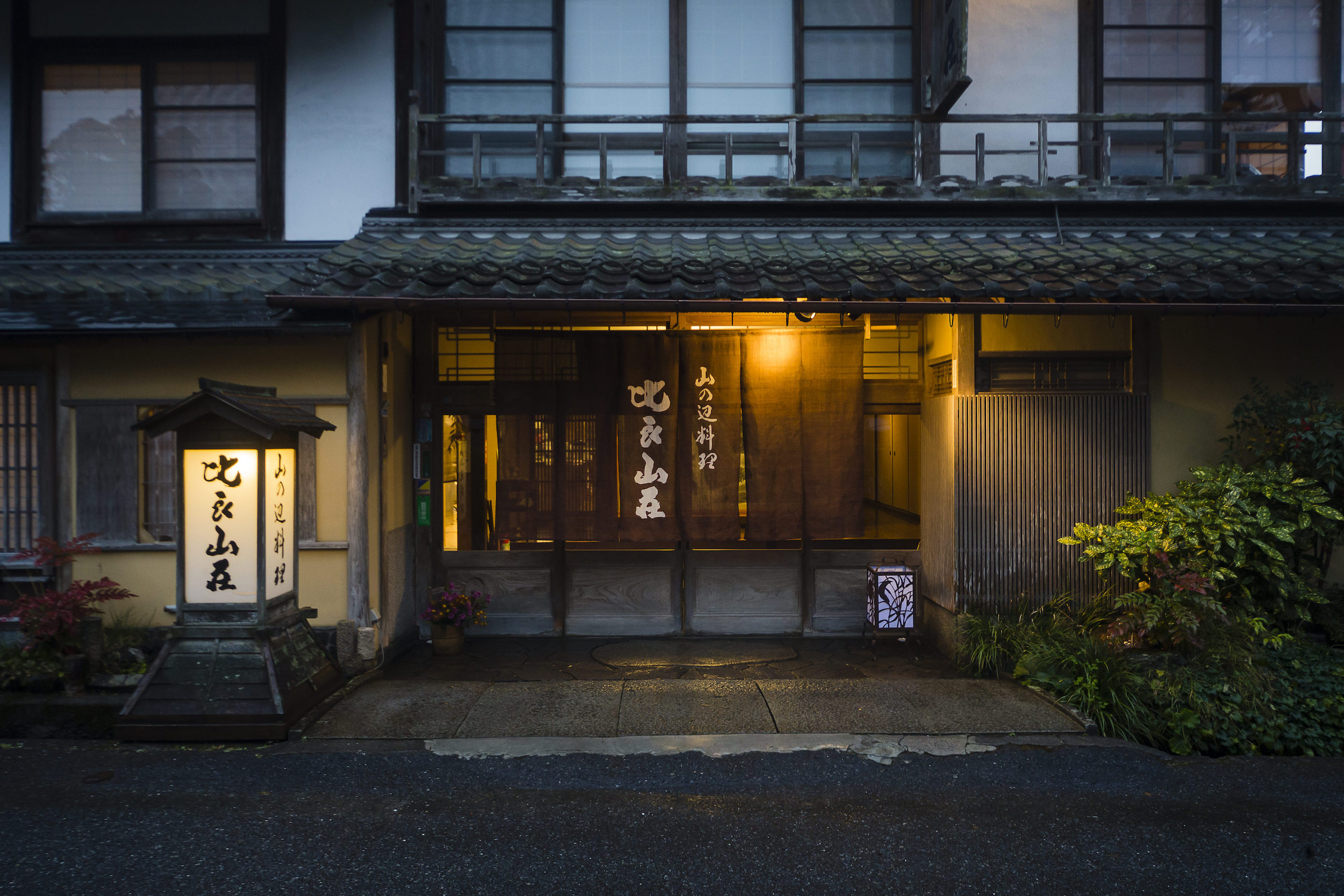