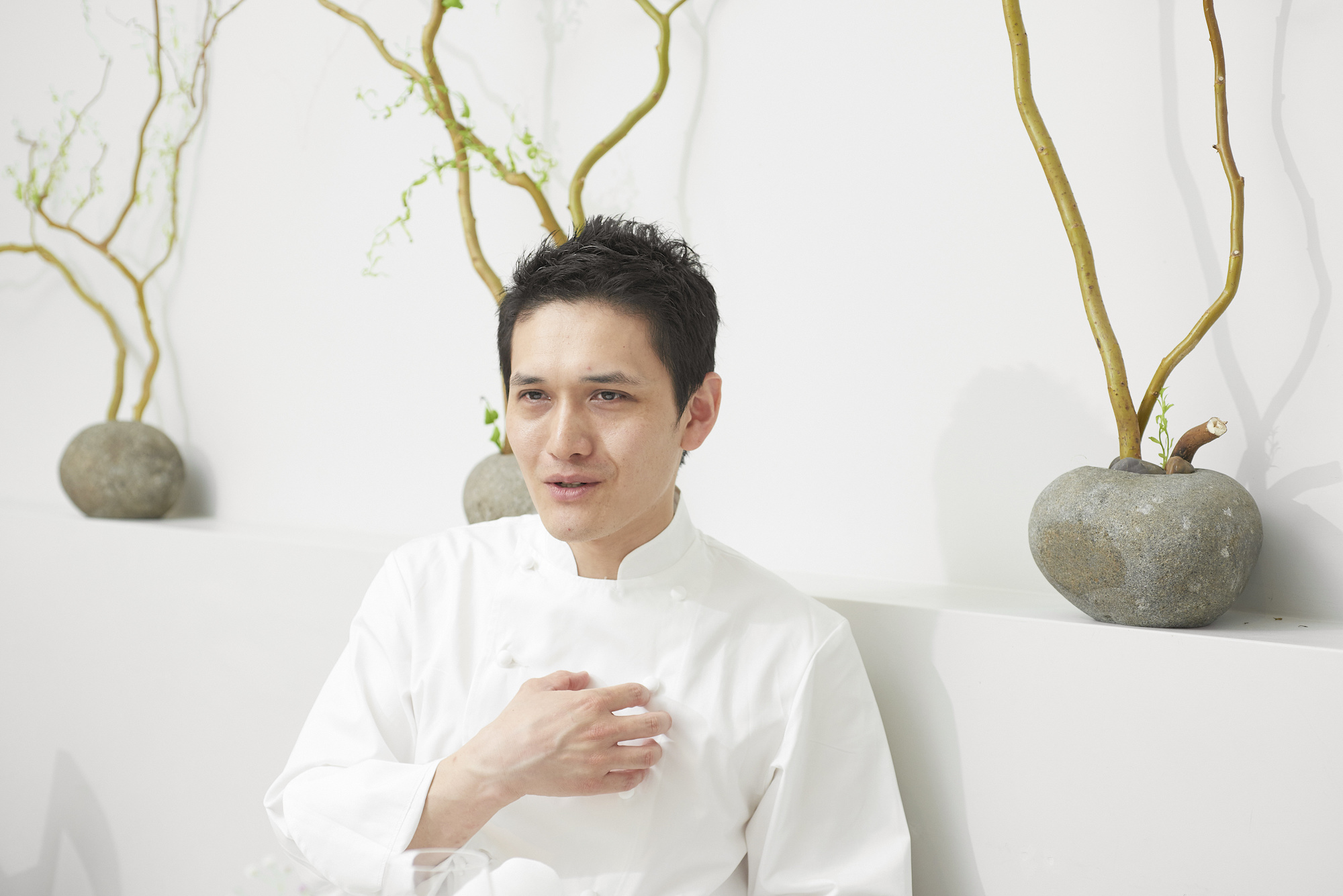 More than technique, it’s important to know the background reason for creating the dishes

You were involved in the launch of Quintessence in Japan, right?

Honjo:
Yes. But after two and a half years of work there we earned three stars and achieved some success, and I felt I wanted to go back to France. So I left Quintessence and returned to France. I really wanted to work at Olivier Roellinger’s restaurant. But that was the year that his restaurant closed, so I couldn’t do so.

Chef Rollinger was creating cuisine that expressed the regional cuisine and classic cuisine that convinced even people who like contemporary cuisine.

He came to eat at my restaurant when it opened. When we talked afterwards, he took me by the hand, looked me in the eye, and told me that because cuisine is both culture and [histoire] (a story), we must cook together with [histoire]. I respect his philosophy of cooking, and I’ve never found anything else as delicious before or since I ate his [homard cacao]. It was shockingly good. I was amazed when I tried it.

I think that with some degree of experience you can know the technique and knowledge behind a cuisine by looking at it, but more important than that is knowing the background reason why the chef is creating that cuisine.
After returning to France and working at the three-star restaurant Petit Nice in Marseille, I worked back through my connections and went to Mugaritz (Spain). Both Mugaritz and Noma are international, and I worked in English and in French. There are a lot of highly motivated people there, and my experience was a stimulating and positive one.

When you opened your own restaurant, did you consider any place other than France?

Honjo:
During my training days, I thought about various places. There were times when I considered New York or London, but I’m very thankful for the encounters I had in France. The nation of France has a culture that accepts others, and I am so thankful to it for giving such opportunities to this Japanese popping up out of nowhere.
Above all, I have respect for French culture, and hope that I can make a contribution in some way.

I wanted to open my own restaurant, with age 33 as my goal. It took me a year for establishing the company, with lots to do in terms of interior decoration, architecture, documentation, and more. 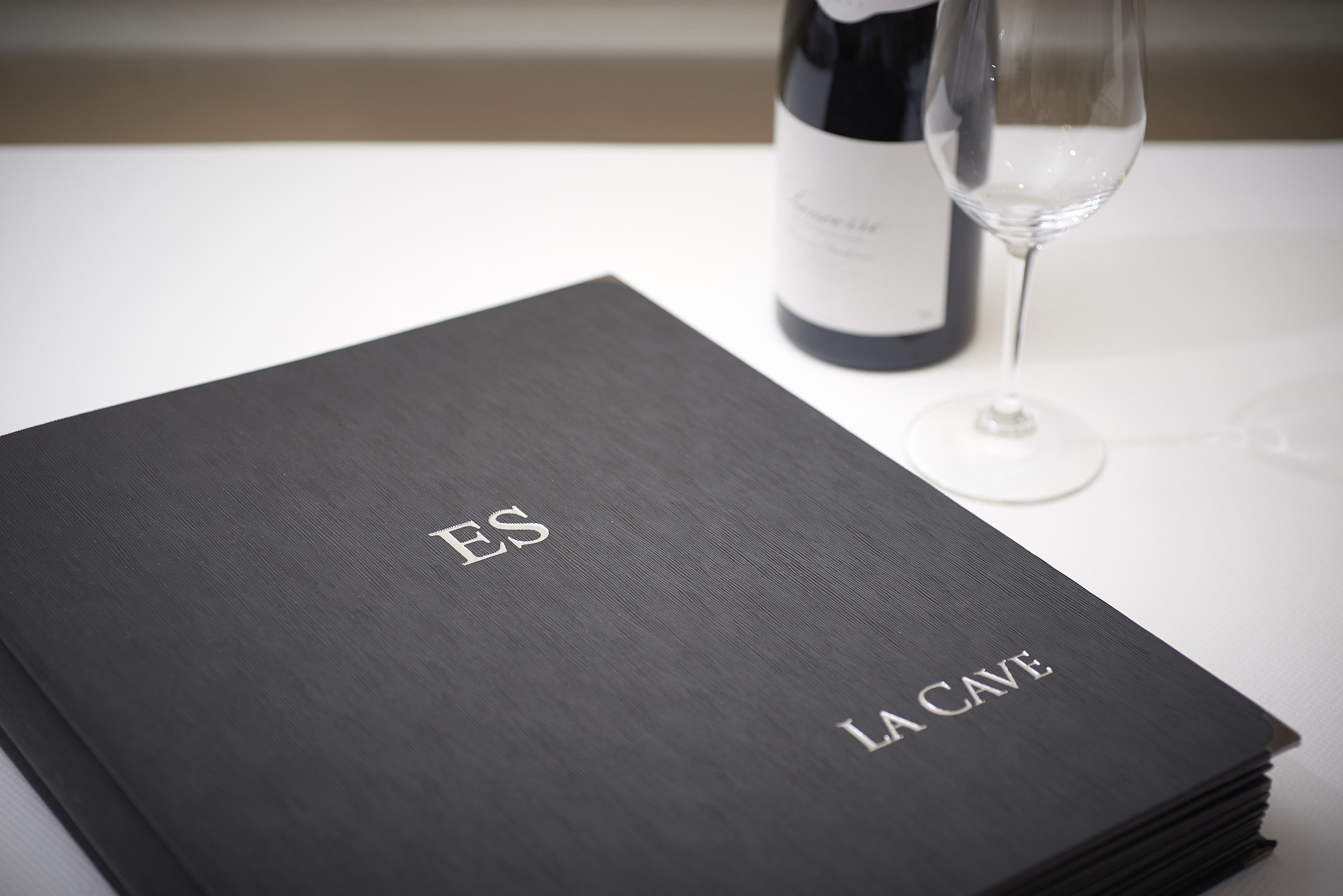 What is the appeal of having a restaurant in France?

Honjo:
First of all, I feel happy about using French ingredients in French cuisine. I’m not negative toward using Japanese-style ingredients, but I want to use ingredients in their natural form – more natural ones and herbs in season – and cook in a natural style myself, too.

Still, even if I don’t use Japanese ingredients, customers tell me that they feel a Japanese [esprit]. Even without using soy sauce and miso, I’m cooking through the filter of a Japanese, so I think there’s no small deal of that.

What is it that you value in cooking?

Honjo:
Paying respect to the ingredients. I try as much as I can to cook without loss. Resources are going to become more and more scarce; even fish are becoming increasingly hard to catch.
I always bear in mind that I have to work with respect for the ingredients and strive to avoid loss.

I think Pascal Barbot of Astrance was your greatest influence. What was great about Astrance?

Honjo:
They way Pascal associates with people as human beings. I’ve worked in many kinds of restaurants so far, but most aren’t concerned when employees leave, and don’t have care for them. But no matter what restaurant I might be working at, Pascal would always, always show concern, saying “Taka, what’s up, where are you working, are you okay?”

Astrance is run jointly by two people: Pascal doing the cooking and Christophe handling service and management. They make a great pair. Because Pascal understood how difficult it is to have look after not only cooking but also management and service, he showed me such concern, and even now worries about me.

When I opened my restaurant, too, he shared me information of all of the purveyors, not only for ingredients but also for everything from tablecloths to water and coffee. He told me to ask him anything I wanted, and even now responds right away when I ask him “Do you know a purveyor for this product?” I really appreciate that. There really aren’t many chefs like that, what with knowledge of purveyors being a secret among secrets. With such close ties in France, I was able to make the decision to open a restaurant here. 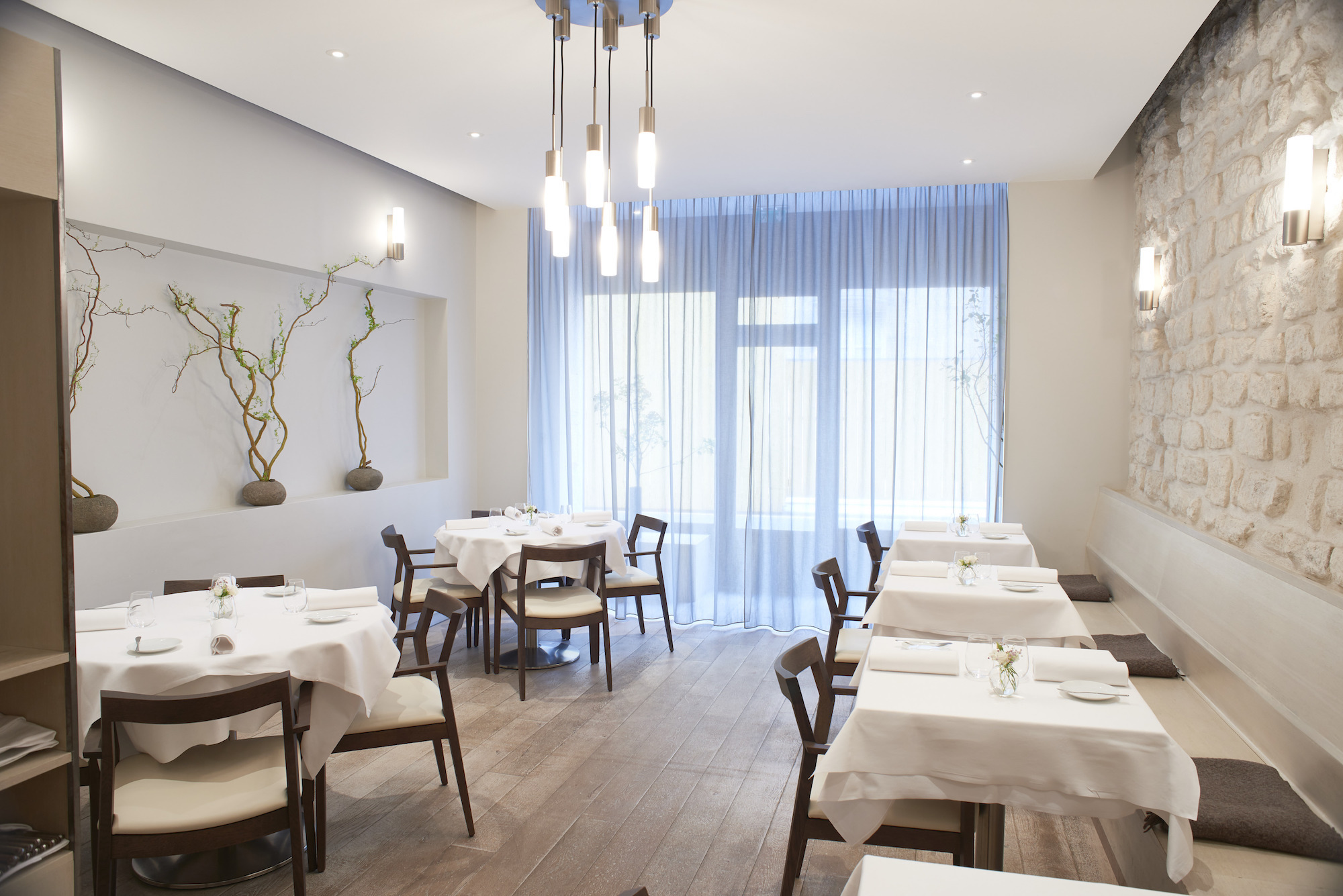 Honjo:
That’s right, I didn’t attend. I guess that’s why things are tough even now, but the first two years in particular were tough. Because I had to look after not only cooking but also the balance of the business. Hmm, even now I study every day…

In the end, I think I couldn’t have opened without my connections to people. My staff at launch were people I gathered through networks of acquaintances. There were even people I knew from back at Mugaritz and Noma, who told me they wanted to work together if I opened a restaurant. Visas are a problem if they’re from South America or the U.S., though.

What sort of people do you want to work with?

Honjo:
I guess people who are sage are the best. Sage and serious-minded. I think that wiseness and seriousness come out in people’s work.

What things are important for the career of an overseas chef?

Honjo:
Showing respect. As for why we were accepted back then in France, I believe that because the chefs before us in the previous generation had worked hard, Japanese were accepted as serious and hard-working. Lately, I often hear about people who, although accepted, think “This isn’t what I expected” once they get started, and just take off. I don’t want what the chefs before us have built up to be changed.

Whether you can build up a career is a matter of hard work. Suddenly flying over here like I did is one way, but in an age overflowing with information, I think it’s also important to discover the style you really want to pursue while in Japan, then come here after properly building a career in Japan. I suppose different people have different approaches, though.

Language study is also really important. Without that, no matter how much knowledge and technique you have, you can’t convey those.

Also, I want young people to undertake work with great conviction. Managing a restaurant is far tougher than any pain experienced during the training period, so I’d like for anyone dreaming of going solo to have a vision for the future.

Is there anything you want to do from here on out? Like opening a restaurant in Japan, for example.

Honjo:
I think I haven’t gotten that far yet. I’m still immature not only as a chef but also as a manager, and I’m always painfully aware that I need to study more. Also, I think that Japan and Japanese chefs are going to be drawing attention, and so I think that I need to communicate information to the world from here on out.

With frameworks themselves becoming borderless in French cuisine, Scandinavian cuisine, Spanish cuisine, Italian cuisine and other cuisines, I get the sense that French cuisine is falling behind the rest. We have to boost the level, working from the young generation.

Moreover, as someone operating in Paris, I feel a need to engage in French cuisine more globally, while keeping in contact with other chefs. Otherwise, I think the number of people who want to become chefs will decrease.

I also want to make my restaurant into one that customers from many countries will visit. Of course, I would like to become a locally loved restaurant like the ones I frequented when I was little, but I also want to communicate widely with the world.

Strong ambition and hard work, recognized by the places where he went to train. Chef Honjo's conviction is conveyed to experienced chefs. The opportunities to train given to him and the feeling of support from many senior chefs and colleagues provide his restaurant with support. What comes across in this interview is not only Mr. Honjo's cooking ability and business sense but also the magnetic strength of his convictions.
Chefs of other restaurants with same ambitions will continue to visit Mr. Honjo's restaurant, and will undoubtedly create a new page in French cuisine together
Prev Page
Next Page 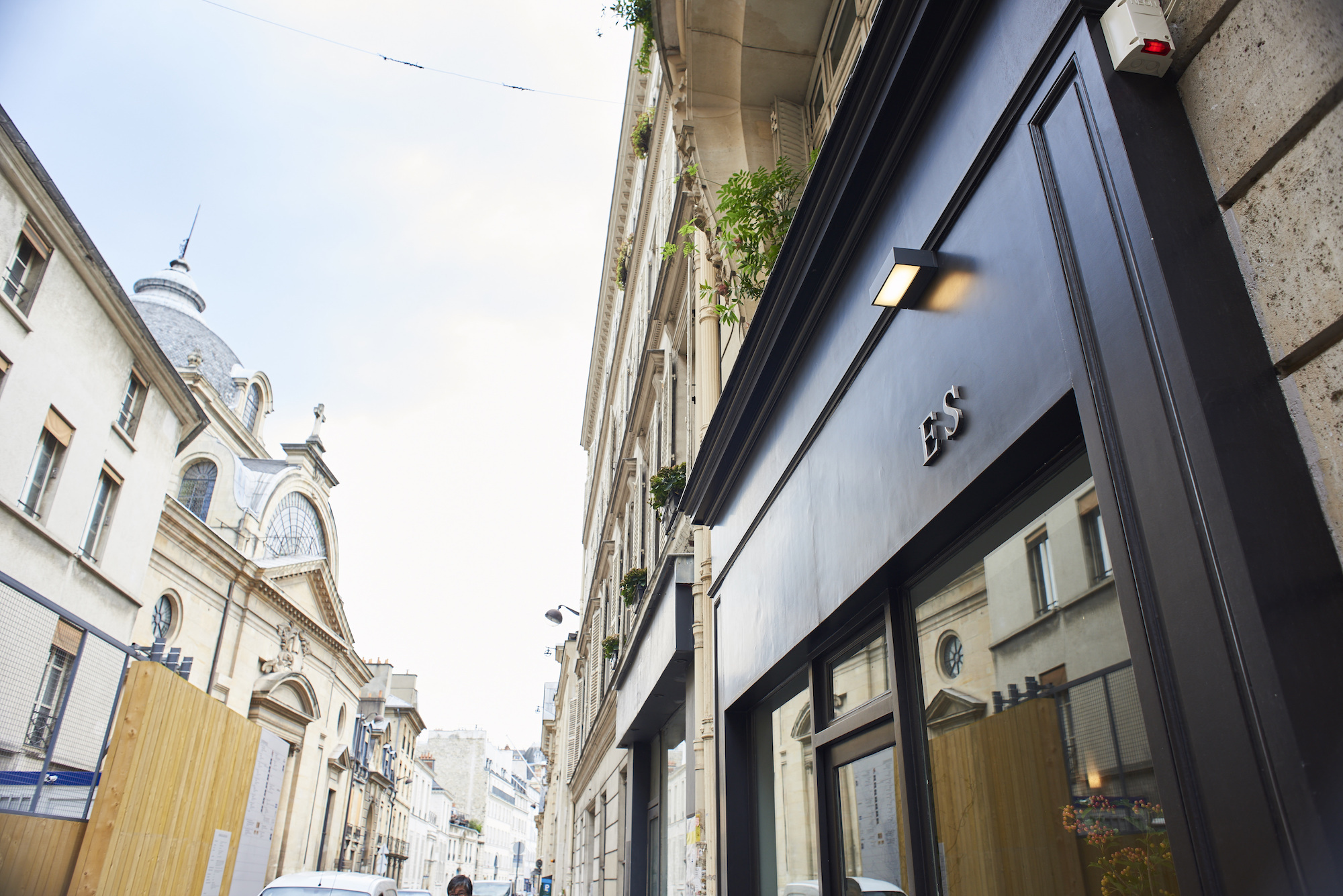