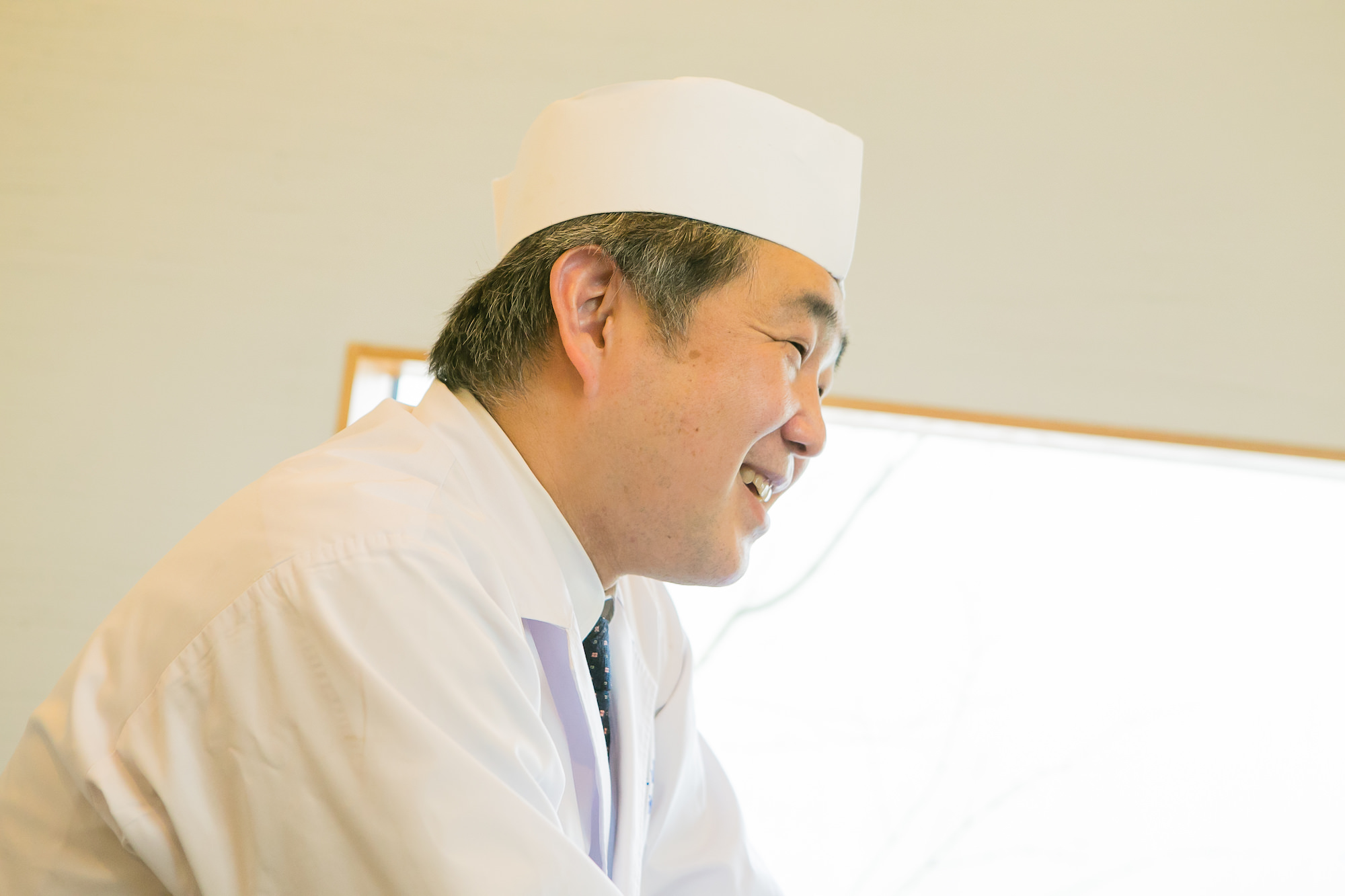 "Shunsai Yamasaki," a well-known Japanese restaurant situated in the quiet neighborhood of Hankyu Senri-Yama Station, is known for the kind hospitality it extends to every detail as well as its richly sensitive and beautiful cuisine. We interviewed the owner, Hirofumi Yamasaki—who has been trained at well-established traditional Japanese restaurants and has devoted his life to Japanese cuisine since he was a teenager—about his training, the story leading up to opening his own restaurant, and his thoughts for the staff pursuing to become chefs. 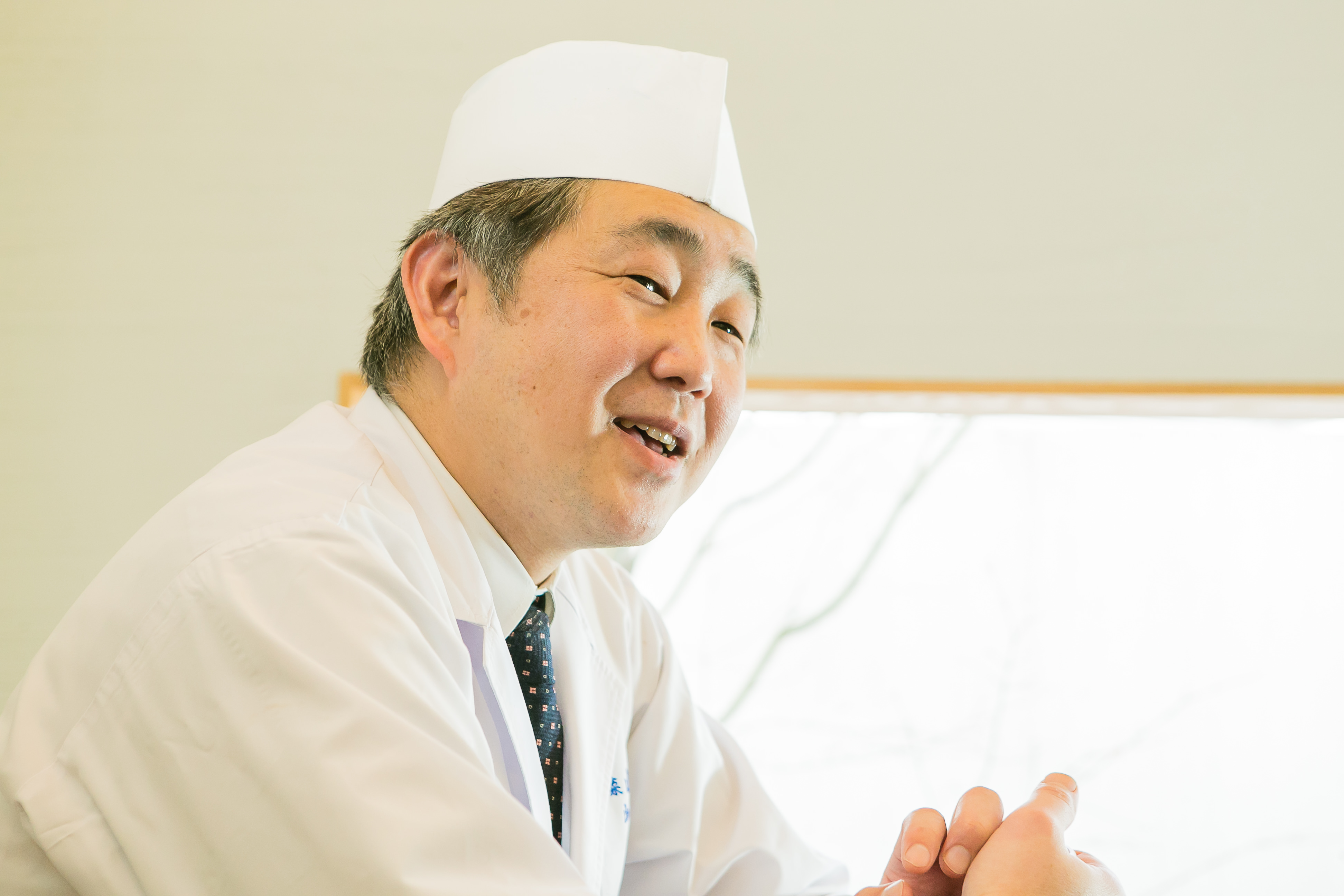 Fascinated by the coolness of the sous chef

First of all, please tell us what triggered you to go into the world of cooking.

Mr. Yamasaki:
Since my parents were both working, my two siblings and I took turns to cook every day. My parents happily ate my cooking exclaiming “It’s delicious! It’s delicious!” because, of course, their own son made it, and I must have misunderstood and thought, “I’m good at cooking!” (haha) I felt cooking was something I could do. However, after I graduated from high school, my feelings reversed when I was working at a traditional Japanese restaurant in Sonezaki, “Hachiko,” while I was enrolled at Tsuji Culinary Institute.

The sous chef at that restaurant was unbelievably cool, but he was so strict that all the staff would become silent. It was as if your back muscles would straighten when he walked into the kitchen … it was very shocking to learn that such a strict world existed because I had been living my life like a carefree student.
The cool sous chef asked me “What are you studying?” When I replied to him, “I’m studying culinary at Tsuji Culinary Institute,” he told me, “Then, come at 3 o’clock tomorrow,” and he taught me many things about cooking. Although he was strict, he was very passionate. I decided to follow the path of Japanese cuisine after he told me, “You’re Japanese, so you should definitely pursue Japanese cuisine.”

Then, after I studied at the school for a year while I was working part-time, I continued with full-fledged training at a traditional Japanese restaurant, “Tsumugi.” This happened because, at that time, I had received the sous chef’s advice again, “It takes years to receive training at a large traditional Japanese restaurant and become a head chef. If you want to open your own restaurant, it’s better to enter a small privately owned restaurant as an apprentice and gain lots of experience in a short amount of time.” I’m still in touch with the sous chef and I always go see him during the obon holiday and at the end of the year.

Mr. Yamasaki:
It was way too strict (haha). I was too scared to even quit (haha). I think it’s still the same for students nowadays but at first I didn’t know how to greet properly, or I would carelessly make excuses like “No, this is…” whenever my mistakes were pointed out … it was just nothing but getting scolded every day. I would say, “I’m sorry for being late,” when I was late, but I was scolded even more with replies like, “Is that the face you make when you apologize?” During my part-time job experience, all the basics were hammered into me, like how to greet and interact with senior staff.

Although “Shion,” the restaurant I worked at later on, was also strict, it was not a time when you would easily go look for a new job just because your job was strict. So, I had to do my best at any rate. My colleagues who joined at the same time as me or later would say, “I’m going to a convenience store,” and never return again, or those live-in colleagues at the head chef’s house would never return after going to the public bath (Haha)…these things happened sometimes.
Although I was in a situation that I was too scared to even say, “I want to quit,” it must have been just right for me (haha). 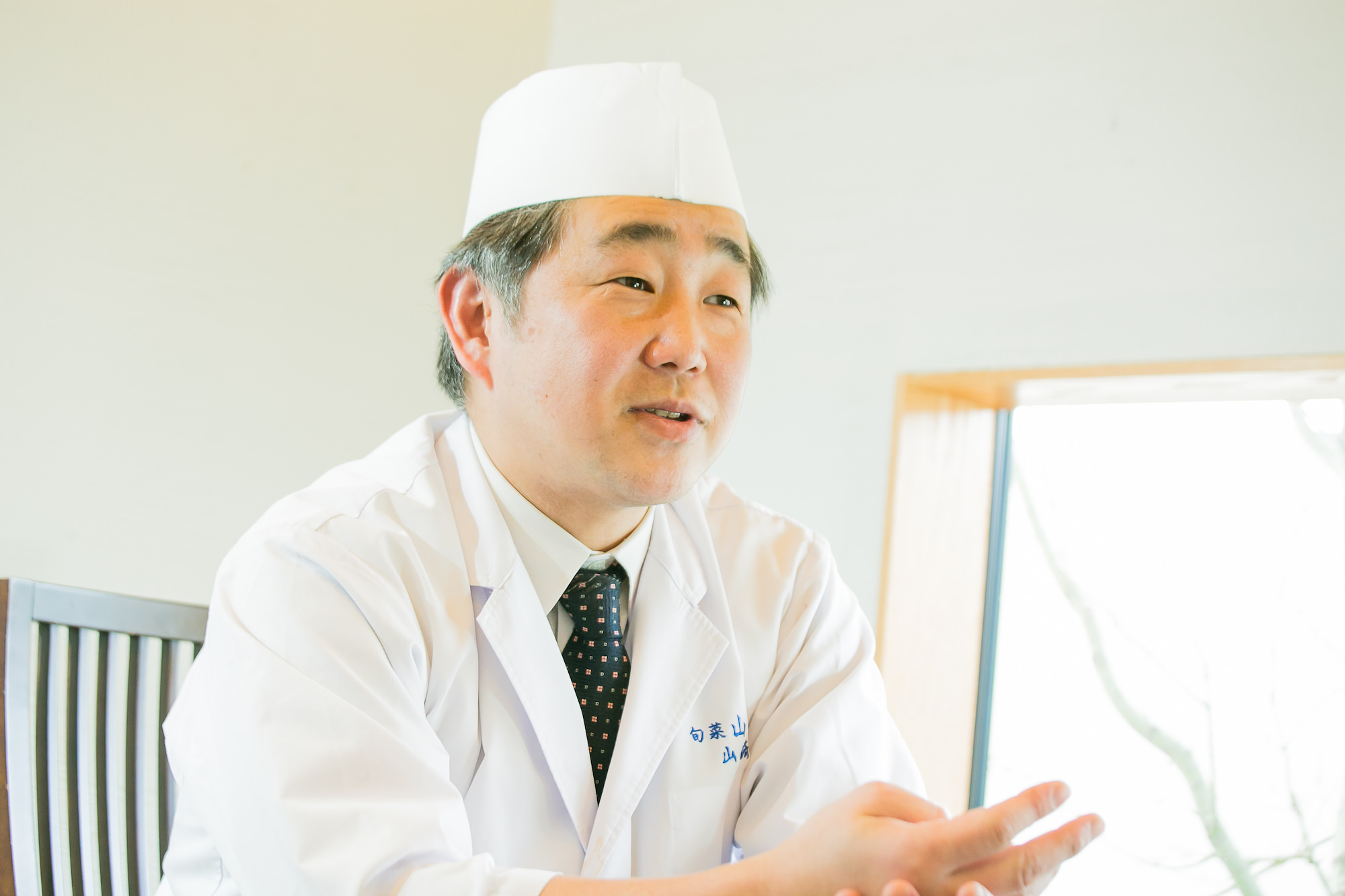 In his 20’s, when he was learning and looking ahead to open his own restaurant

What do you think about it now when you look back at your strict training phase?

Mr. Yamasaki:
The head chef at “Tsumugi,” the first restaurant I worked at, believed that “It means nothing if you don’t open your own restaurant,” so I sincerely felt the significance of undergoing training and learning despite the strictness. Precisely because the head chef had such ideas, he taught me the job and let me handle the fish more and more. Furthermore, since the level of cooking at the restaurant was very high, I was able to learn the depth of Japanese cuisine, as I realized, “The world of Japanese cuisine is huge!” I had already started thinking about opening my own restaurant in my early 20’s because I had been thrown into an environment that required such high awareness. Now that I think of it, I’m so appreciative of the strict environment because I was given an opportunity to undergo training, which would take 10 years for ordinary people, in half the time provided that I had the ambition.

Although I try to give job training to young people nowadays, they make tired faces and some quit right away. When that happens, my mood drops. As I look at their tired faces, I start to think many things like “It must be hard for him/her” or “I wonder if he/she wants to quit.”

After I became the one to guide and be strict on people, I learned how difficult it is for the first time. The strict person needs to have resolute feelings that won’t be affected by the facial expressions or feelings of others. It’s not actually a good thing but…I cannot fully treat them strictly (haha). Now that I think of it, my mentor used to always interact with the staff while keeping distance … so he must have been very lonely actually.

So you opened your own restaurant after your training at the second restaurant?

Mr. Yamasaki:
Well, when I was working at the restaurant, the Kobe earthquake occurred. Then, the restaurant fell into financial trouble and all the staff got fired. It was just around the season for New Year’s parties, so all the reservations got canceled and 60% of our customers were from the Kobe area… So, I got in touch with my connection from when I was working part-time, and I opened my own restaurant at the age of 28 after returning to and working at the first restaurant for about two and a half years.

Although I returned to the restaurant where I used to work part-time, because it was a large restaurant, my job responsibility was clearly determined and I was not able to express myself at all. It was like I was earnestly repeating one task from the morning till night. So, I started to have a strong feeling that said, “I want to open my own restaurant!” At that time, I found a “store for rent” poster during my work commute… It sparked something, and I immediately made an inquiry on the phone and things quickly moved forward. I never considered another location, so it may have been some kind of fate. 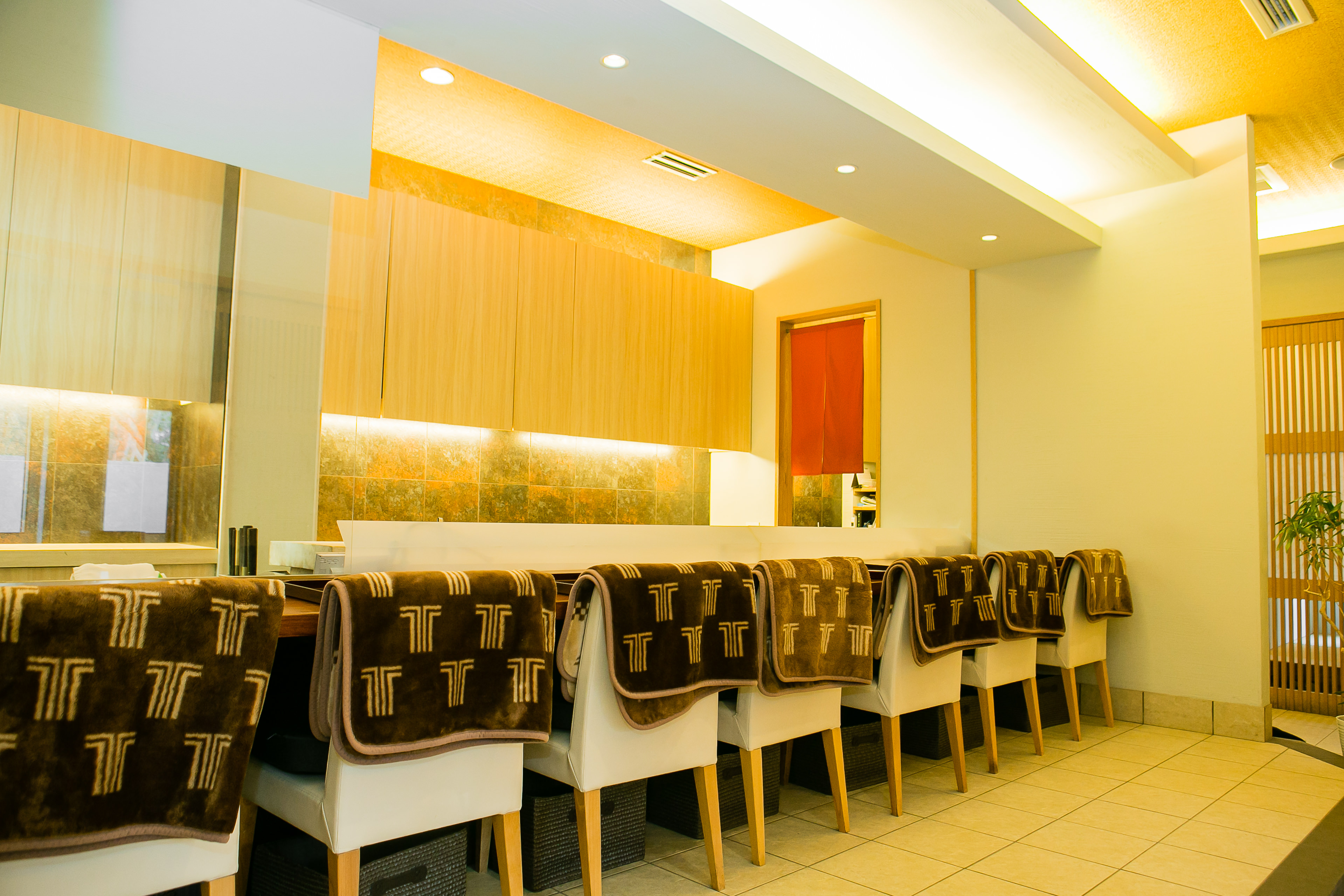 Mr. Yamasaki: When it first opened, I got carried away. Now that I think of it, it must have been hard, but I was too busy at that time to even think that it was hard. At first, lunchtime started off well. I think this is a trait of Hokusetsu area, but every restaurant was packed during lunchtime and word-of-mouth from housewives who came for lunch gradually spread out.

Nighttime was a problem. Although it was busy on Saturday and Sunday, weekday nights were tough. Since people have an image of Japanese cuisine as expensive and I wanted to offer it at a comparatively reasonable price, we only had the chef’s special course for ¥5,000 at first. But the price range may have seemed incomplete. Later on, as I added meal courses at slightly higher prices, people started to come during weekdays, too. For older customers, the ¥5,000 course meal may have seemed a bit insufficient when they wanted to take out their important clients. 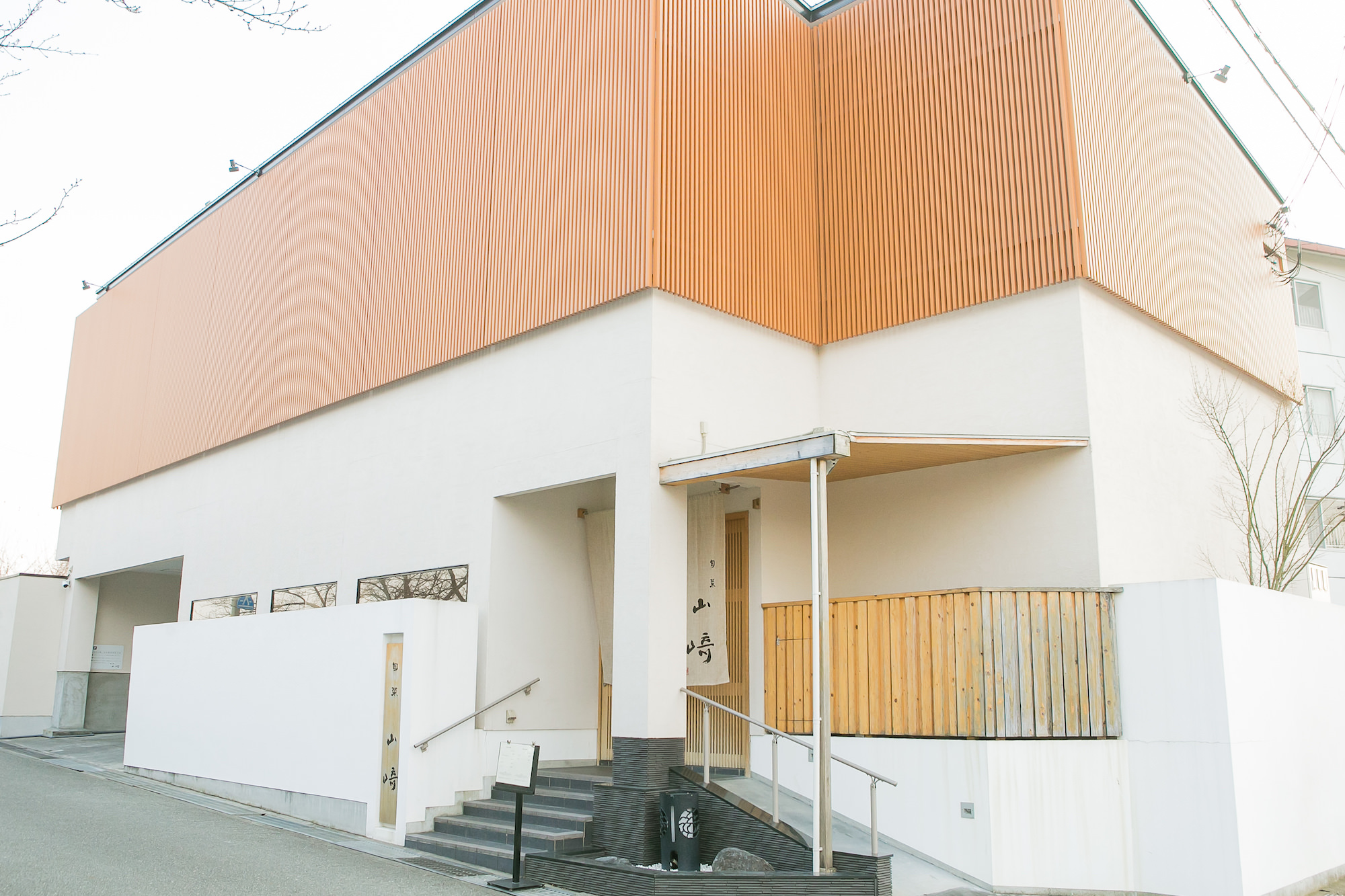