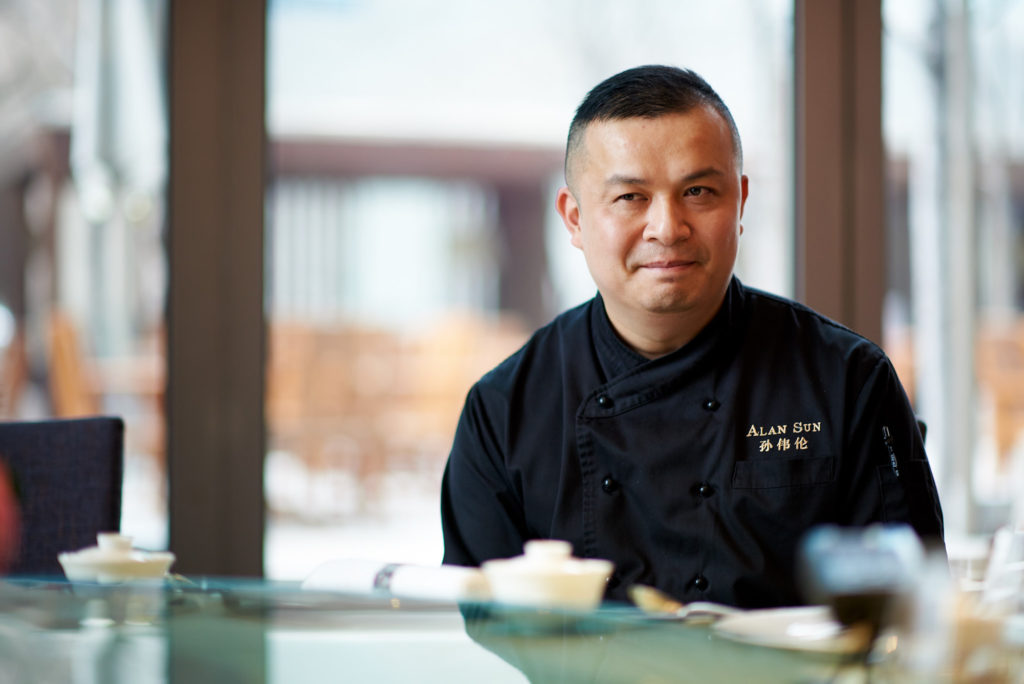 The challenges of being young and talented in the kitchen

Let’s back up. What about earlier in your career? What problems did you encounter?

Mr. Sun:
The major problem was being young, and sometimes superior to people who were older than me. In Chinese kitchens, the chefs are called hands, so the number two is the second hand, and number three is third hand, etc. That older generation often had a problem with my age, even if they agreed I was talented.

How did you overcome that?

Mr. Sun:
Work harder! I think all the jealousy and contempt was reasonable and natural. I started working at the age of 13, while many others began in their twenties. You need to prove to others that you are more than talented, but also more diligent and skillful than them.

You previously talked about Tsang Chiu King being a mentor. What was different about him?

Mr. Sun:
His culinary skills. Tsang was very creative and he influenced a whole generation of younger chefs, who went on to win a large number of awards. That’s because of him.

What type of dishes did he do when you worked with him?

Mr. Sun:
He did a garoupa with wild mushrooms and a shrimp stir-fried with egg white. His soups were even better than Lei Garden, and he used even better ingredients.

What do you think is the main differences between a Western kitchen and a Chinese kitchen?

Mr. Sun:
The cooking method, the process, the entire kitchen system is different. To my point of view, Chinese food focuses on the cooking techniques such as wok work, but western kitchens tend to focus on sauce making. The way of thinking is quite different.

It took you 20 years to become a head chef and you were quite talented. Does it usually take longer for other people to get the position in Chinese kitchens?

Mr. Sun:
For some people, it might take less than 20 years, but it’s not about time; it’s about experience and vision. The two decades I spent was worthwhile. I know how to pick the right ingredients, and I know how to use the right technique for them. 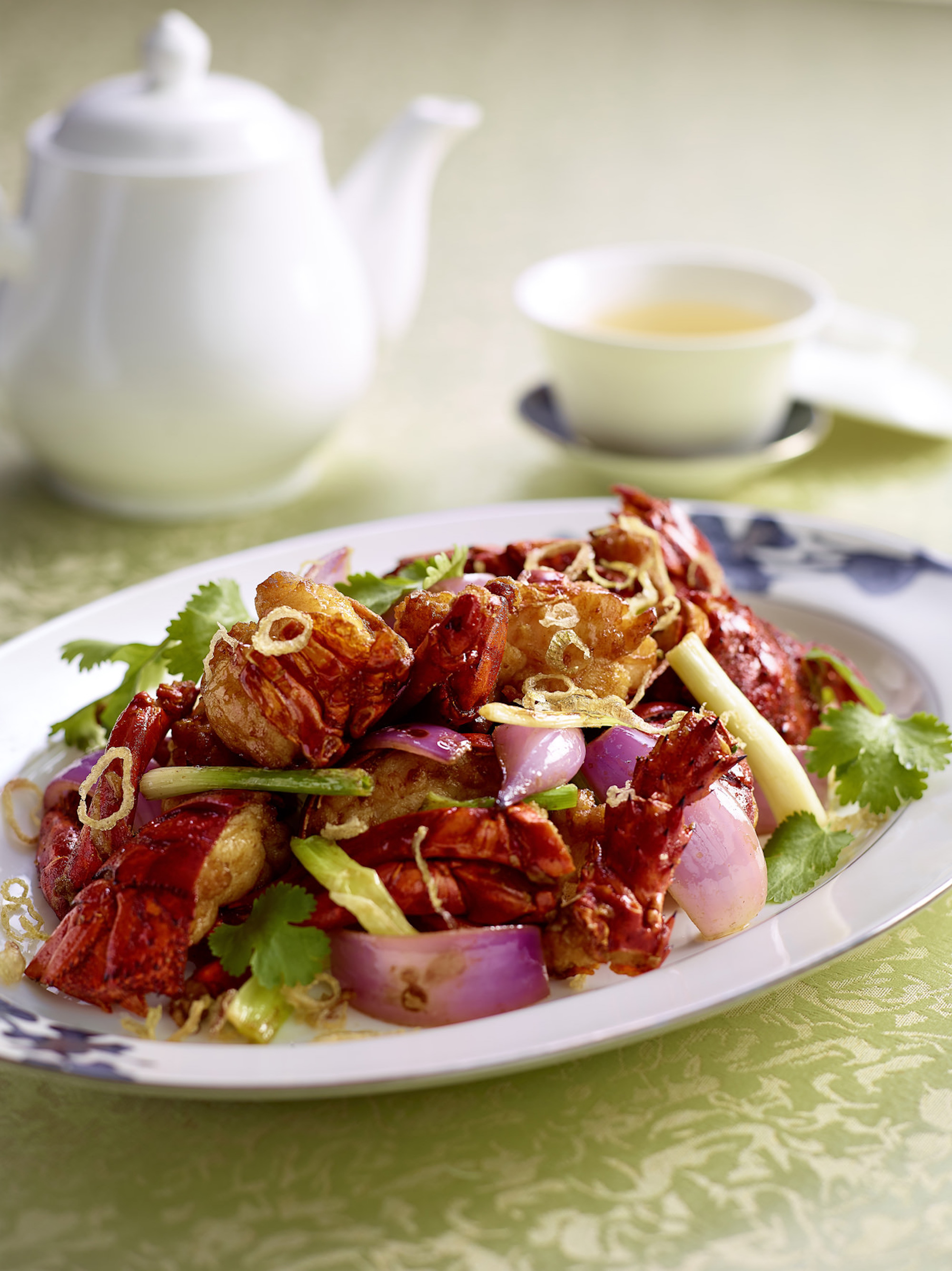 On what it means to be Cantonese and cook Cantonese

Have you ever thought of doing different styles of cuisine besides Cantonese?

Mr. Sun:
No. Maybe I am old-fashioned (laugh). I am Cantonese so I stick with my own food and keep improving it.

What kind of things would you pay attention when creating a menu?

Mr. Sun:
Customer’s preference, the dining situation and ingredients. When I develop the menu, though I am serving Cantonese, I will adjust the flavor depend on where I serve and who I serve. For example, if I serve to Shanghainese, I will adapt the cuisine to Shanghainese preferences to make it more mild than if I serve it in northern China, where they generally prefer stronger flavors.

I visit the markets in Shanghai very often. I like to explore local ingredients. If I find something new at the market, I will attempt to use it in my menu. I’m not afraid to blend new ingredients into the traditional Cantonese cuisine as long as I cook it in a Cantonese way. I like to show originality and give my customers a surprise. 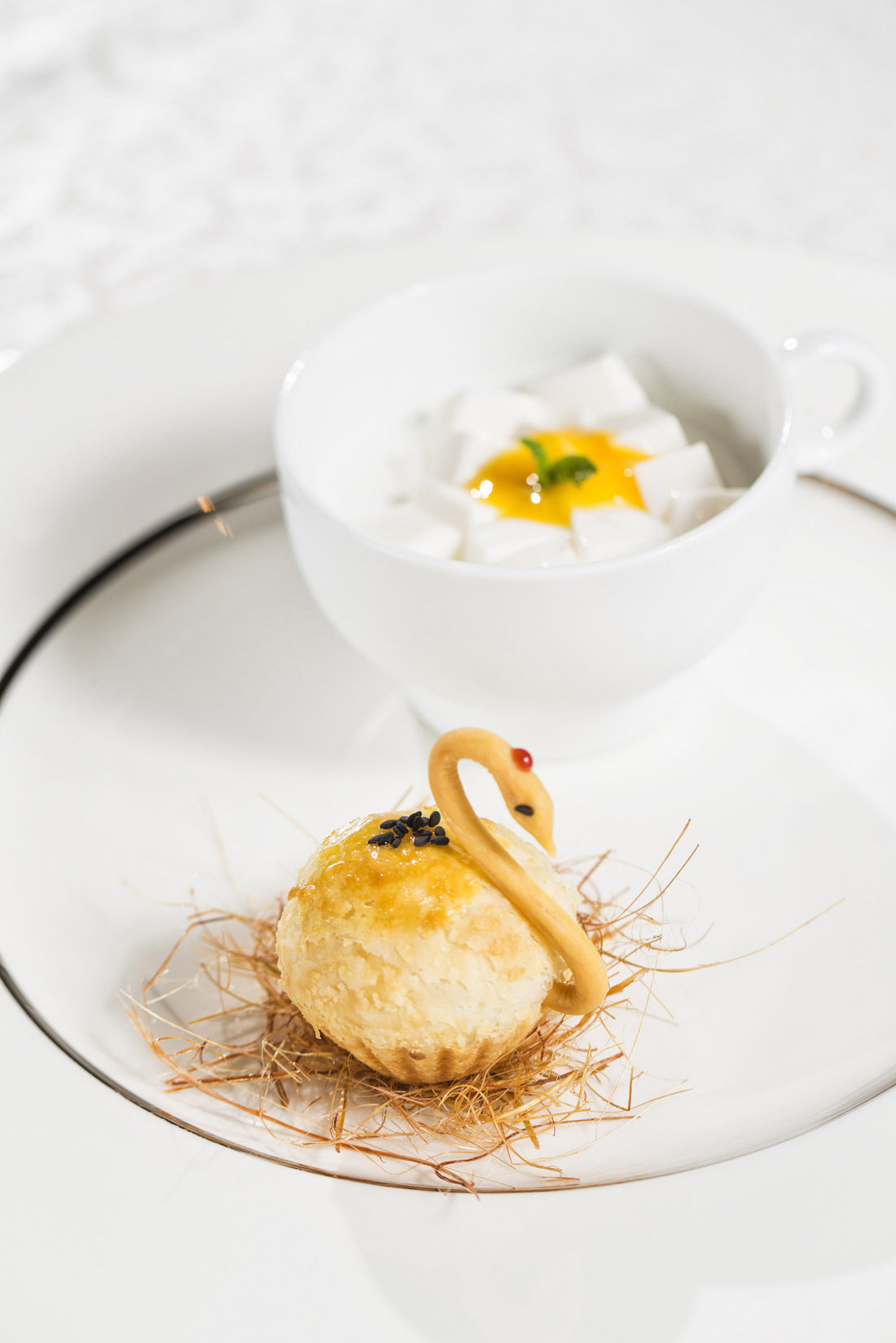 How do you distinguish T’ang Court from other Cantonese restaurants?

Mr. Sun:
We are traditional Cantonese. We use original ingredients, high quality ingredients. So we are doing the most basic thing, but doing the basic thing in the best way. We also have a lot of internal training and communication amongst the restaurants and hotels. T’ang Court in Hong Kong also has three stars.

Can you give some examples of basic dishes that you have really taken pride in?

Mr. Sun:
Classic fried chicken. Shrimp balls made with jiu jie shrimp. Original materials, original ingredients. We went through a lot of shrimp to pick out the best from all the suppliers. Other restaurants don’t use this type of fresh prawn, they might use a refrigerated or frozen prawn. It might still have the right taste but the texture will be lost. For our fried chicken we only use Hainan Wenchang chickens that are 1.6 kilograms and above, so the skin is crispy and the meat is tender. We tried a dozen varieties of chicken before finally settling on this type of Wenchang chicken. 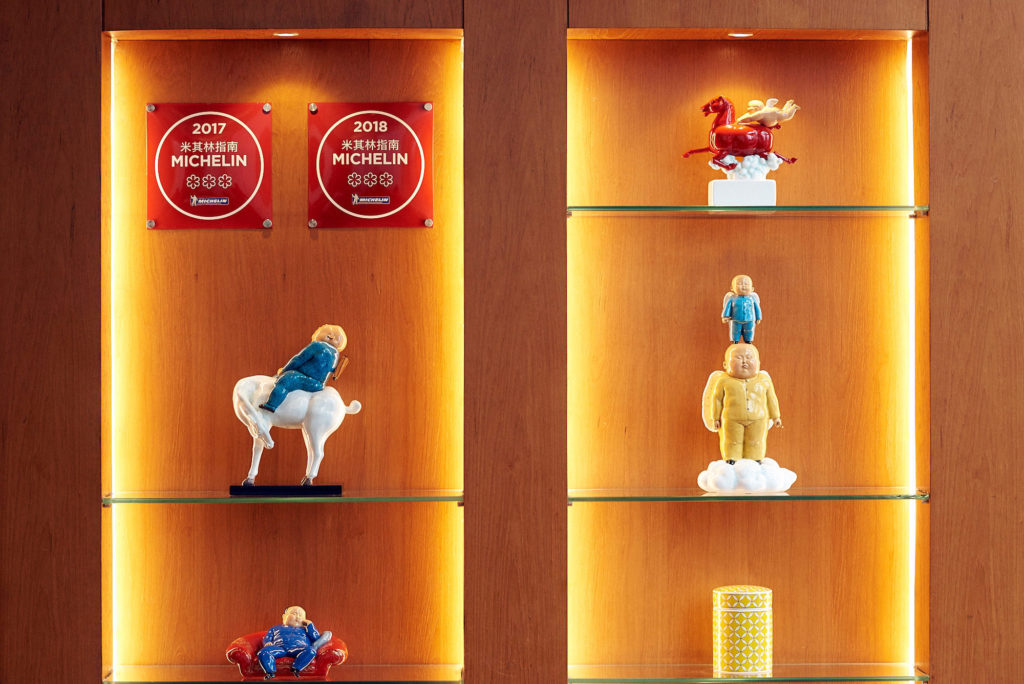 Taking over a 3-star restaurant and what it means

You are taking on an extraordinary challenge, taking over a kitchen that already has three Michelin stars. What’s your strategy to maintain the stars?

Mr. Sun:
Using even better ingredients, communicating even more with our sister restaurants, to bring our product from “good” to “extremely good”, and communicating with diners to know their feedback and where to improve.

There’s going to be a lot of pressure.

Mr. Sun:
We have to be more diligent, and dedicated, and hard-working. It sounds very basic, but it’s the most difficult part.

Will there be any conflict with pursuing creativity while sticking to the traditions?

What’s your suggestion for young chefs?

Mr. Sun:
If you really love the job, and have a passion for the job, you have to be diligent to become the best.

You seem amazingly calm for someone taking on a three-star restaurant.

Mr. Sun:
Calm? I’ve been like this since I was young. I might look calm but I don’t feel it! 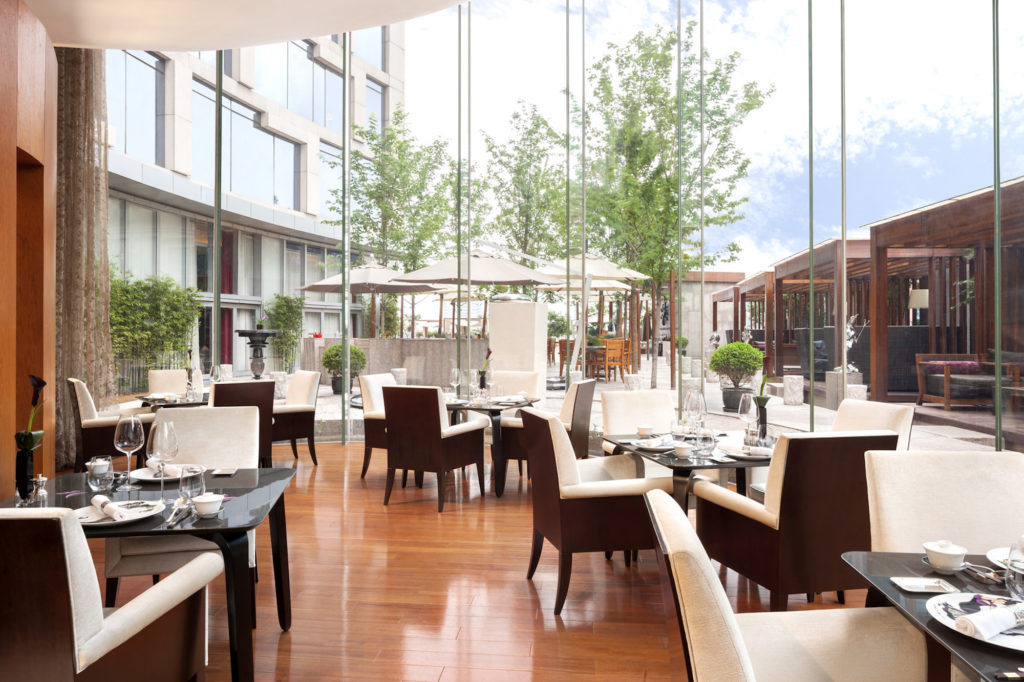 Chef Sun was diligent in answering all of our questions, but the overwhelming sense I got was that he is infinitely more comfortable in the kitchen, leading his team of chefs, than being put under the spotlight and having his personal history examined. What started for him as just a job has taken him to the highest possible position and he must be under enormous pressure to maintain the restaurant’s three-star Michelin rating, which it has achieved for the past two years running. Having been in his role for just four months, it’s easy to imagine he is still coming to terms with what this role means, and what aspects of his past experience he will need to draw on, be it the inspiration of his mentors Yau and Tsang, or his own past, being the talented underdog and having to prove himself. Polite and factual, Sun quickly returned to the kitchen when the interview was over, no doubt to continue the endless training and perfectionism necessary to get where he is today.
Prev Page
Next Page 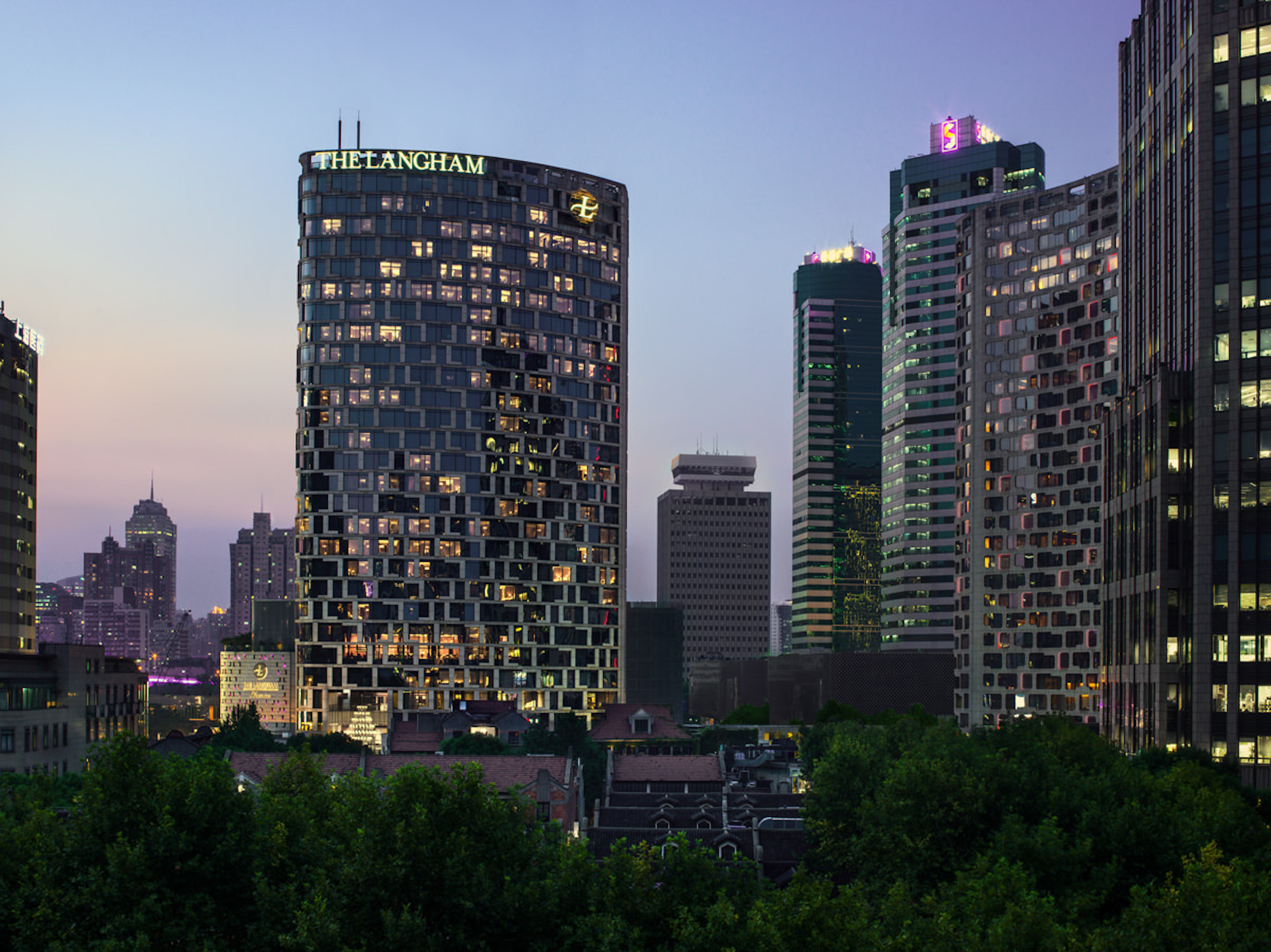