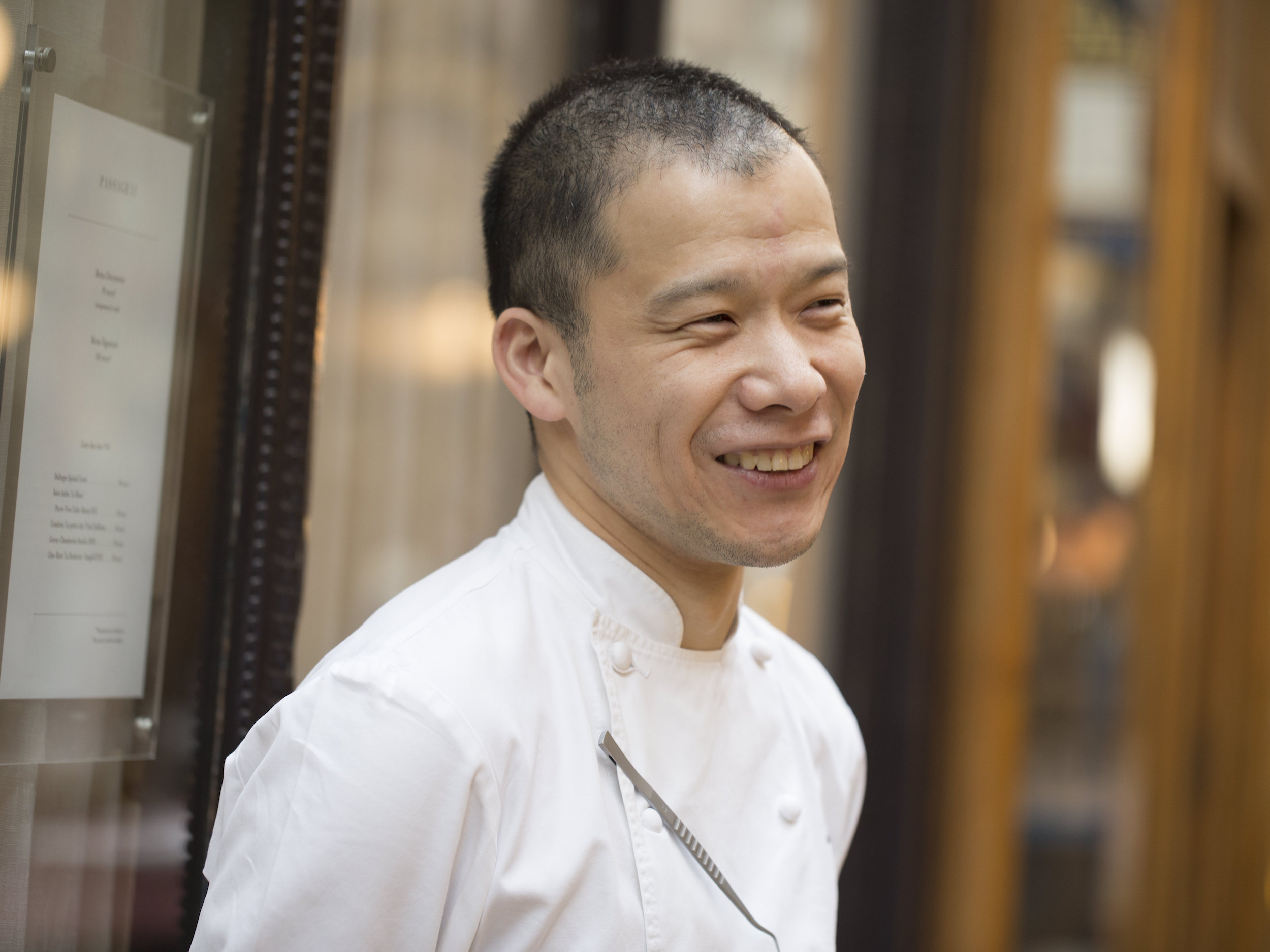 Born in Hokkaido in 1977, Mr. Sato, who grew up with his mother who loves cooking, decided to become a French chef because of his admiration for undiscovered tastes.
After his training in Japan he went to France. What he faced that was a reality with hardships, such as lack of language ability and a world in which the evaluation towards Japanese was tough. At times he got himself in bad shape, but he overcame the tough times and eventually earned two stars from the Michelin Guide (France), the first Japanese chef to do so. I took the opportunity to hear from Mr. Sato, who continues to move forward, about how difficult it is for Japanese chefs to survive in France, how painful it can be, and his own future. 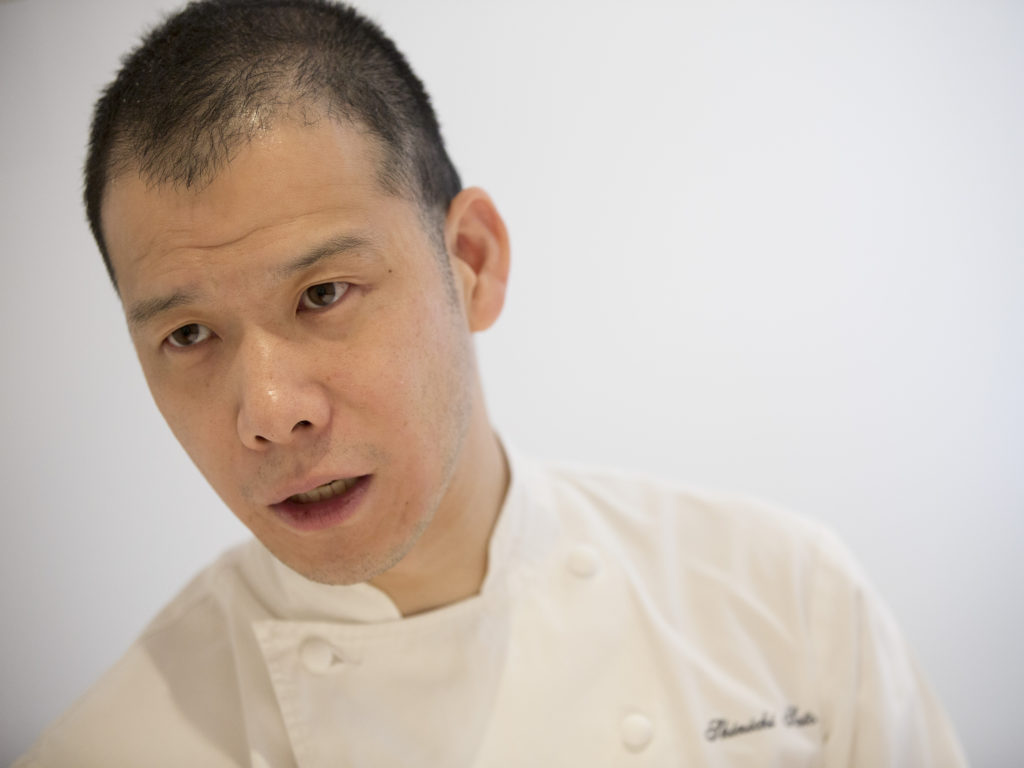 Coolness, admiration, an unknown world: the beginning was very simple.

I heard that you are from Hokkaido. What made you first think of becoming a chef?

Mr. Sato:
In the beginning I think it was the influence of my mother and father. My parents both loved cooking by themselves, and eating, so I naturally gained an interest in eating.

Then it was when I entered culinary college that I decided to become a chef for real. Of course, my culinary interests were my primary motivation, but in addition I hated the idea of sitting at a desk and studying any longer. In culinary college we do study, but I hated the studies at schools and universities.

Had you been aimed to become a French chef since back then?

Mr. Sato:
I had a rough idea of that. But culinary college was a place to learn in general about everything, like Japanese cuisine, Chinese cuisine, and nutrition science, so it was not like I was studying French cuisine professionally. I also learned sushi.

The time I really decided to become a French chef was after starting to work, actually.
I had to decide on a career to pursue.

The reason why I chose French cuisine was quite simple. I simply thought, “It is cool.”
And the hats are tall, too! Also I admired the unknown tastes of French cuisine.
We did not have much chance to eat food like foie gras or caviar regularly.

During your training in Japan, who influenced you the most?

Mr. Sato:
That would be Mr. Makoto Ishii, who is chef at Le Musée in Sapporo now.
When he was working as head chef at Enoteca Sapporo, I was working under him.
He, and the food that he cooked, were astonishing.

Back then he started as a chef at a big hotel, but chefs there, due to employment category issues, were all like white-collar workers. They do not try to express themselves with their food, and instead they just cook like a job is given to them. It’s not necessarily a bad thing, of course.
There are things you can learn there, and since hotels are a big business category, it is also necessary in a way.

In that situation, Mr. Ishii was cooking with a philosophy like, “I want to make this kind of product.” I was meeting that kind of chef for the first time in my life, so I thought, “That’s great.” 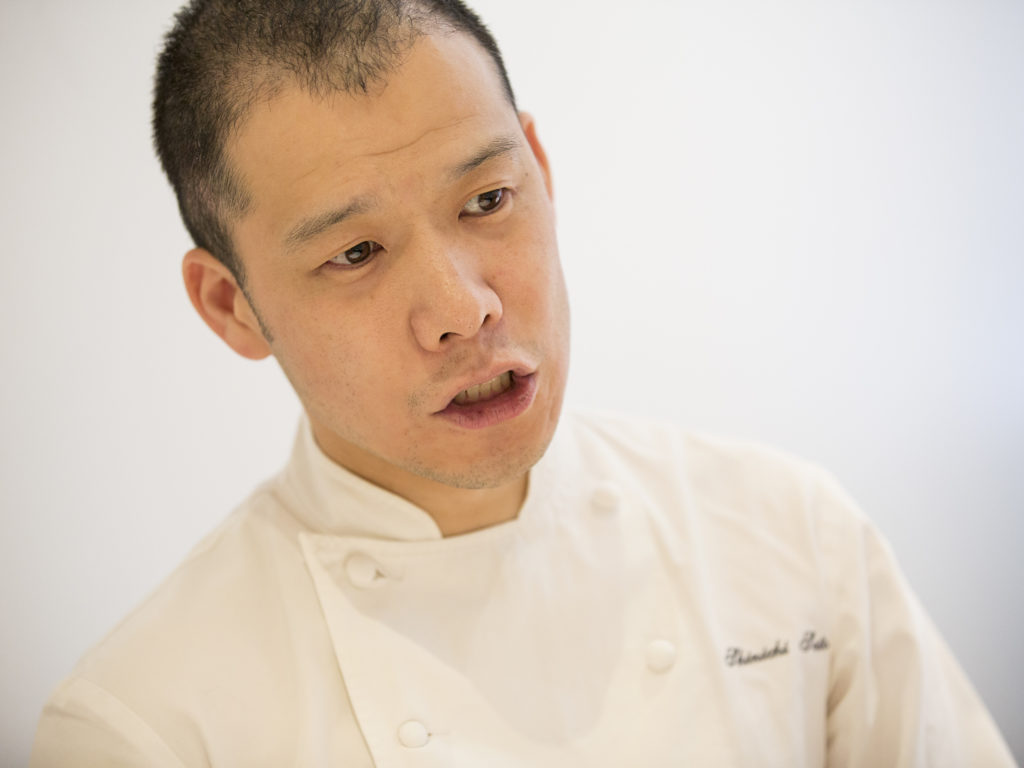 Going to France at the age of 22. What awaited were lack of my skills and a tough evaluation towards Japanese chefs.

After that you went to France when you were 22 years old.

Mr. Sato:
Yes. It was 2000 when I came to France. If I was going to cook French cuisine, I thought I should see the scene in France, but it was not that easy.

Mr. Sato:
Of course, I think everyone goes through tough times, but I could not speak French and I did not have a work permit back then. It was extremely disadvantageous.

Was there anything else you struggled with?

I was not acknowledged easily. For example, it is common for people with a certain presence or dignity, like being tall or handsome, to be acknowledged. But I am short and look young, so I must have looked like a junior high school student from Asia.
In that situation it was tough unless I showed people that I can put in a lot of work in order to get good jobs.

Nowadays Japanese chefs have unconditional trust in France. In fact, French owners sometimes offer a good position from the get-go, saying, “Is there a Japanese sous chef?”
But back then it was different.

You had been working under tough conditions. But despite that do you still think it was good to go to France?

Mr. Sato:
Of course. I got to learn real French cuisine, but moreover I was able to gain my “characteristics” because of the experience there.

Mr. Sato:
Yes. I guess it was about the time I came to France. The world of French cuisine was changing little by little. Expectations towards food were also changing. The changes were that people who ate French cuisine started to expect the “characteristics” of the chefs to shine through in the food even stronger. They wanted to taste that difference.

For example, in our restaurant there are almost no customers who come to eat traditional French cuisine, or the kind of food that everyone knows and can be seen at any other restaurant.

Rather they come to eat the food of Shinichi Sato, which cannot be eaten at other restaurants and that has a taste that only this restaurant can make.

Those characteristics exist because I entered the field in France and was influenced by many people. Food is artwork that reflects ourselves. The experience of going out, seeing various places, and learning from all of them is needed to produce attractive characteristics.