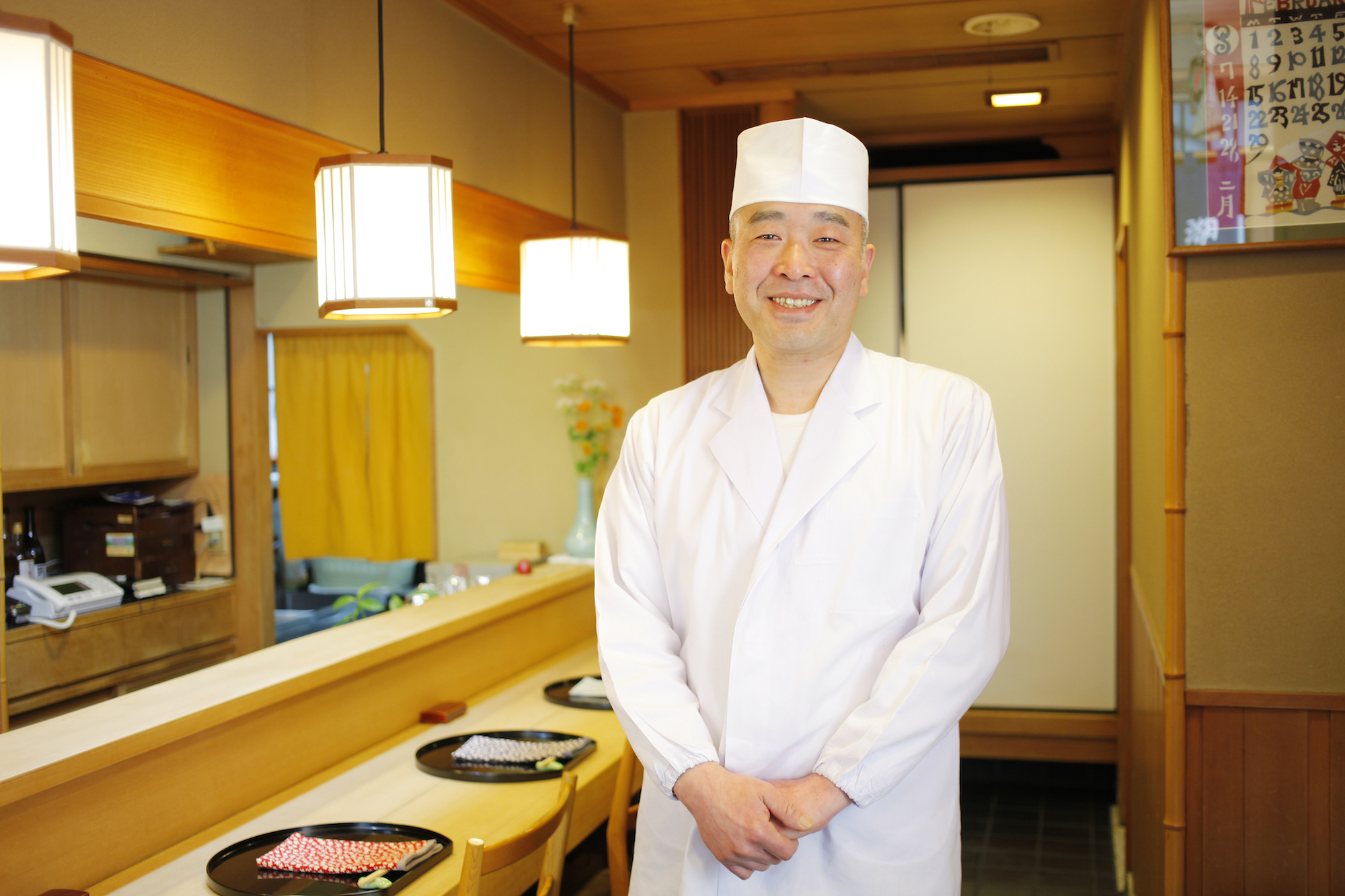 Kogetsu is located just off of Aoyama Dori, a bustling and vibrant street in Tokyo's Aoyama neighborhood. Opening up Kogetsu's sliding wood door reveals counter seating with eight seats, as well as private rooms with tatami mat floors and horigotatsu, which are low wooden tables built over a small pit. Set up in 1967 by the previous owners, Kogetsu has gone on to win 2 Michelin Stars consecutively since 2008. Nevertheless, the restaurant has a calm, nonchalant atmosphere running throughout it. Mr. Sato, the 2nd generation owner of Kogetsu, has had a diverse and colorful career. He spent time training at a long-standing Japanese restaurant before heading off to do volunteer work abroad with the Japan Overseas Cooperation Volunteers. We decided to sit down with Mr. Sato for an interview to gain some insight into his thought process behind cooking and how he came to be the chef he is today. 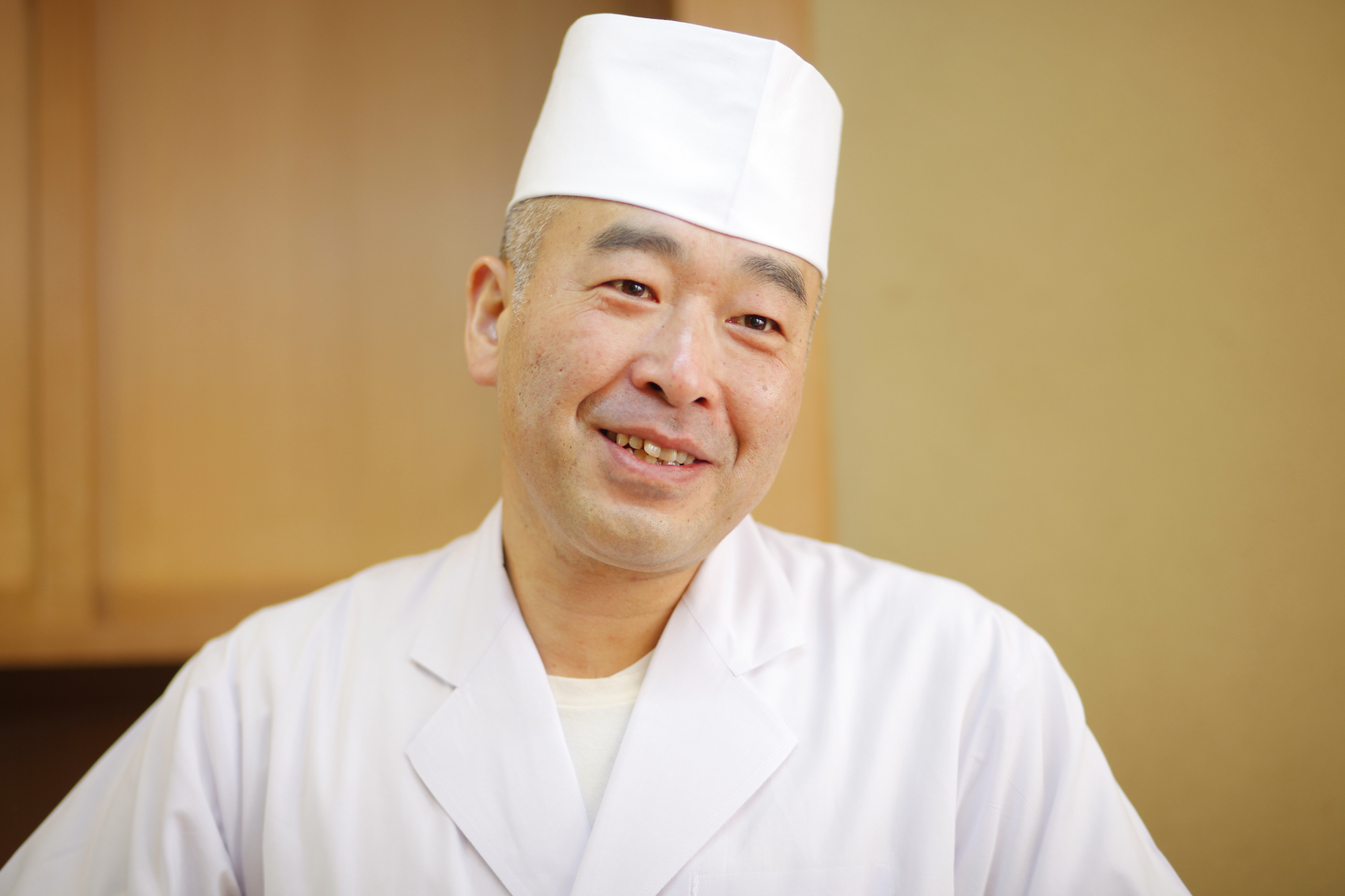 When did you first set your eyes on becoming a chef?

Mr. Sato:
I had already decided that I wanted to become a chef sometime around my 2nd year of high school. Back in the day I was the type of student who would drift off in the middle of class (laughs), so I knew that there was no way I could work at a desk for a living. I had a vague inclination that I wanted to be a craftsman of some sort when I grew up, but the actual idea of becoming a chef didn’t hit me until I was sitting in a ramen shop reading a cooking-themed manga called “The Chef” *1. There is a story line in the manga where a plane crash lands on a deserted island, and one of the passengers is a talented chef who is able to keep everyone alive by cooking for them. I remember thinking, “I can survive like that, too!” (laughs). That was basically all I needed to get motivated.

I grew up in Saitama Prefecture, but I left after my high school graduation to study at Tsuji Culinary Institute in Abeno, Osaka. At the time Tsuji Culinary Institute didn’t have a school in Tokyo yet, but Hattori Nutrition College was there. But, even though I wanted to support myself and live out on my own, my parents were willing to help me go to Osaka for culinary school. Living in Osaka ended up being really good for me and the atmosphere there suited me well. I had a great time living there.

When did you start thinking about taking on traditional Japanese cuisine as a career?

Mr. Sato:
Well when I first entered culinary school I had my eye on French cuisine. I wanted some extra money in my pocket, so I took on the best paying part-time job I could find at an oden (stew) restaurant, which turned out to be a pretty high-end place. I don’t think it’s there anymore, but it was called Hanamizuki, and the head chef there used to work at Yamatoya. During those days, Yamatoya, along with Kitcho and Nadaman, were considered the top three Japanese dining establishments. And so I kept hearing about how Japanese cuisine was better than French cooking. That had a serious impact on me (laughs).

Hanamizuki had a huge counter seating area with an awesome display of Japanese sake bottles lined up together. They carried a lot of local sake brands, and it was the kind of place that customers could always find their favorite type of sake. It must have been 27 or 8 years ago, which is when it was really exceptional for a restaurant to have a big selection of local and regional sake brands. They served sake by pouring it into a small wine glass until it dripped over into a little wooden box beneath the glass. It was incredibly chic and sophisticated.

It was spring when I started working there part-time and I ended up working there for a whole year. Once summer came to an end I knew I had to set out and start cooking Japanese cuisine. Japanese food is truly mesmerizing when it’s being made, which is the main reason I was so attracted to it. I’m sure I thought the same thing about French food too, but if I think about it now, I probably went for Japanese food since I had firsthand experience in seeing it made each day. With that in mind, I was probably struck a bit more by the beauty of Japanese food. 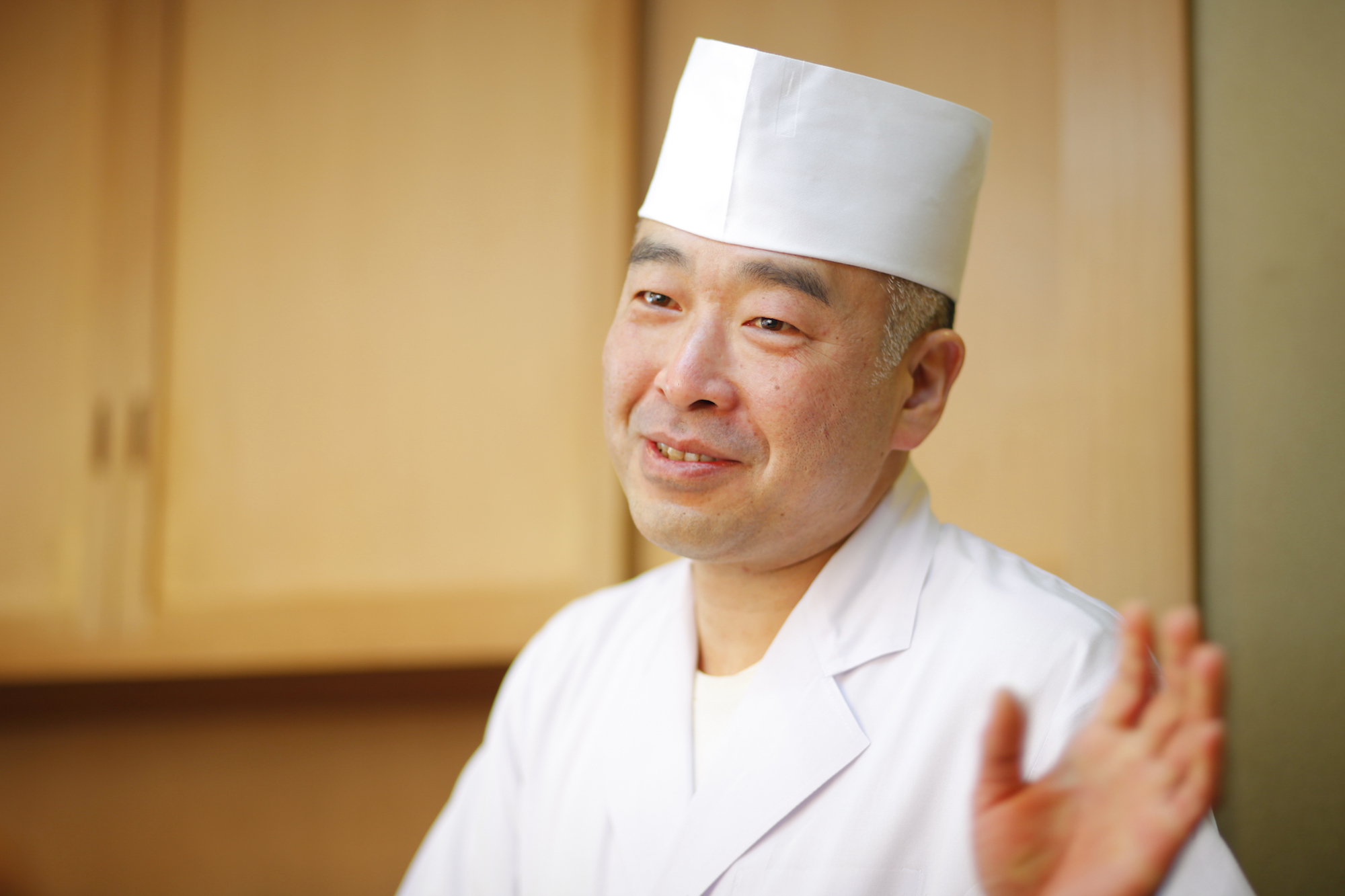 A 6-year apprenticeship at Kitcho, the pinnacle of Japanese cuisine

Your first job after finishing culinary school was at Kitcho, right?

Mr. Sato:
When I was at culinary school I did nothing but work at my part-time job, but I still made sure to show up to class and take it seriously. Although there were times when I nodded off in class… (laughs). Once the job hunting season started in fall, I went looking for a job at a Japanese restaurant.

In the end I went for a job with the Kitcho restaurant group by way of Tsuji Culinary Institute’s endorsement program. As long as I cleared the school’s internal selection process I would get the job, but even though I had a perfect attendance record, there were other students being considered as well. It was extremely nerve-wracking wondering if I would get the job or not. As October passed into November everyone around me was set to work. Then about a month later when I was the only one left they gave me a tentative offer.

Mr. Sato:
I figured that the initiation party would be around Koraibashi in Osaka, but no one told me anything about where they were having it. Then I found out the venue was in Tokyo, so I jumped on the bullet train and headed over there right away. I hopped off the train at Shimbashi Station right as it started to snow, and I can still remember feeling a wave of dread for what was to come.

So then I make it over to Kitcho’s Tokyo location, but by the time I got there it was already nighttime and there were people in the kitchen washing dishes with suits on. There were maybe about 100 people who joined at the same time as me. That felt like a lot of people to hire at once, so I assumed that a portion of them would probably quit sometime down the road. Well, this also happened to be the exact same year the Japanese bubble economy burst.

There were six other new hires assigned to the same location as me. I heard that about half of them would probably quit midway through the first week, but out of those 6 people only one ended up quitting, and that was after a year.

Teiichi Yuki, the founder of Kitcho, contributed a lot to Japanese cuisine. Were you able to interact with him at all?

Mr. Sato:
Kitcho has several locations throughout the Kanto and Kansai regions. We all referred to Mr. Yuki as “master,” but he typically would only be in Tokyo for about a week or so.

One of my more nostalgic memories is when I first came on board and we had to take turns rubbing the master’s feet each night before he went to bed. After work was over for the day, new staff members would have to head over to the room he was staying in to give him a foot massage. But the room he was in was really warm and he would have traditional Japanese music going on in the background, so one time after a long day of work I started to nod off right in the middle of rubbing his feet. Next thing you know I heard his voice yelling at me to wake up (laughs). That’s definitely not something that would happen nowadays. I feel like that was just how it was during the Showa era.

He had a very awe-inspiring character, so I didn’t really talk to him much. One of my senior colleagues would be in the room with me to help, but even so I had only been there for maybe a year at that point, so I didn’t feel like I was in a place to start a conversation or questions. The conversation was basically just me responding to different things he would say.

What was the biggest thing you had to overcome during your 6 years of training at Kitcho?

Mr. Sato:
Training at Kitcho was very intense. The training period was six years, but two of those years were at the location in Ginza and the other four years were at Isetan (Note: The Isetan location was remodeled and changed to “Shogatsuya Kitcho”).

Kitcho’s headquarters is in Osaka, but the location in Ginza is considered the flagship branch for Tokyo. The plating, dining arrangements, ingredients, and clientele that came in were on a very high level. But, it was really frustrating since I wasn’t allowed to actually do the work, which made me want to quit the restaurant. I wasn’t permitted to work in the kitchen at the Ginza location since they put me in charge of plating and utensils.

I thought my duties would change after I put in a year of work, but when the time came the manager told me I still wasn’t ready. I had really had it after that. That alone was enough to infuriate me. I decided to go to the head chef to tell him that I’ll quit if things keep going like this even after all of my training. He immediately told me to transfer to the branch at Isetan.

The Isetan branch had just opened up and it was extremely busy. The number of workers there was slim to begin with, and positions were opening up from people quitting. The entire staff there, including the head chef, were all pretty young. I plunged straight into the work and pushed myself as much as possible. We could only be there from 7:00 am to midnight since the restaurant was in a department store, but even so I would be there working hard the entire time. My duties were much more comprehensive than before, so every day was truly exhilarating.

Out of the four years I spent at the Isetan branch, the first year after it opened was extremely frantic and busy. It calmed down after that though, and I was able to work throughout the rest of my three years there. 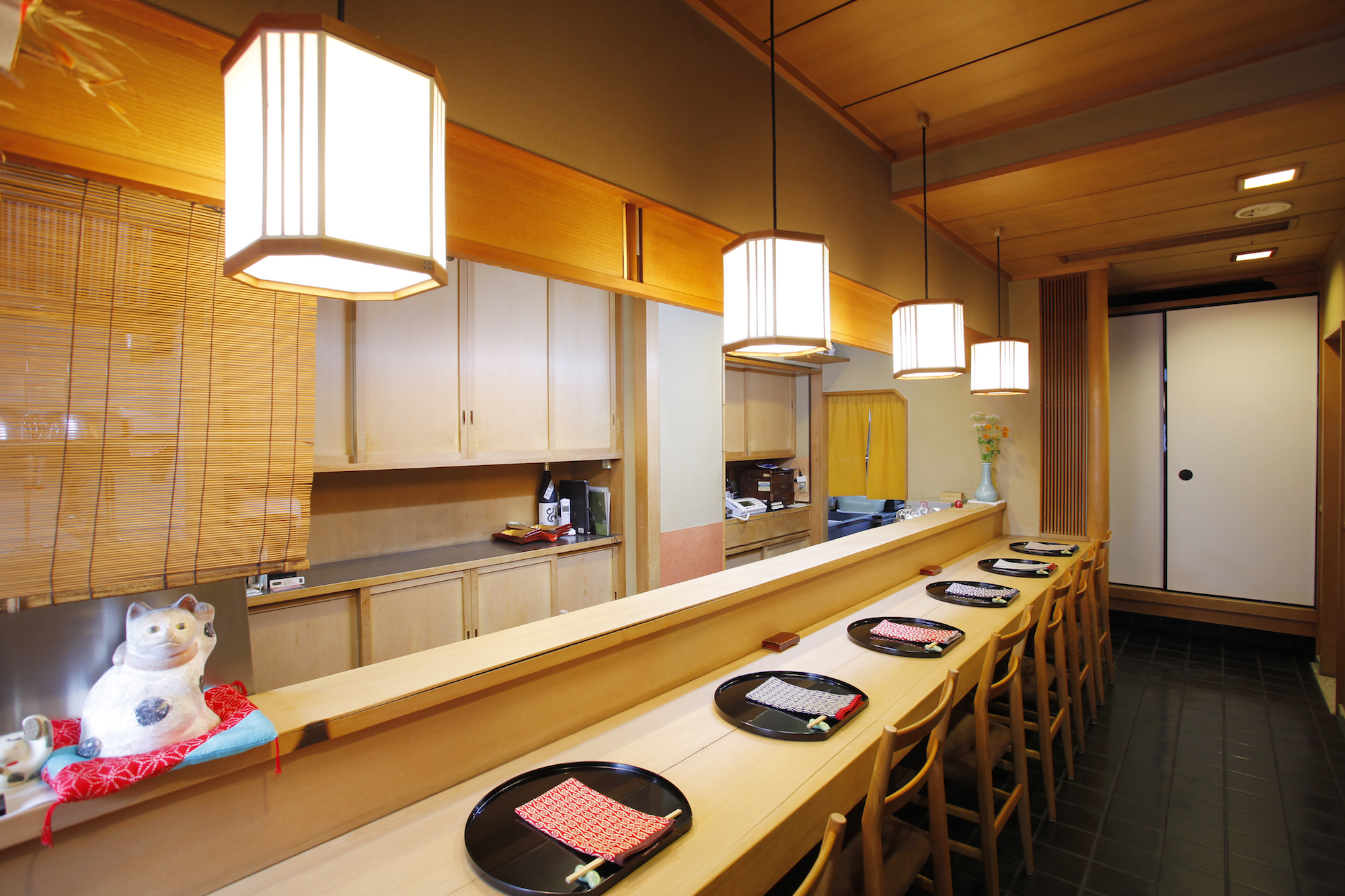