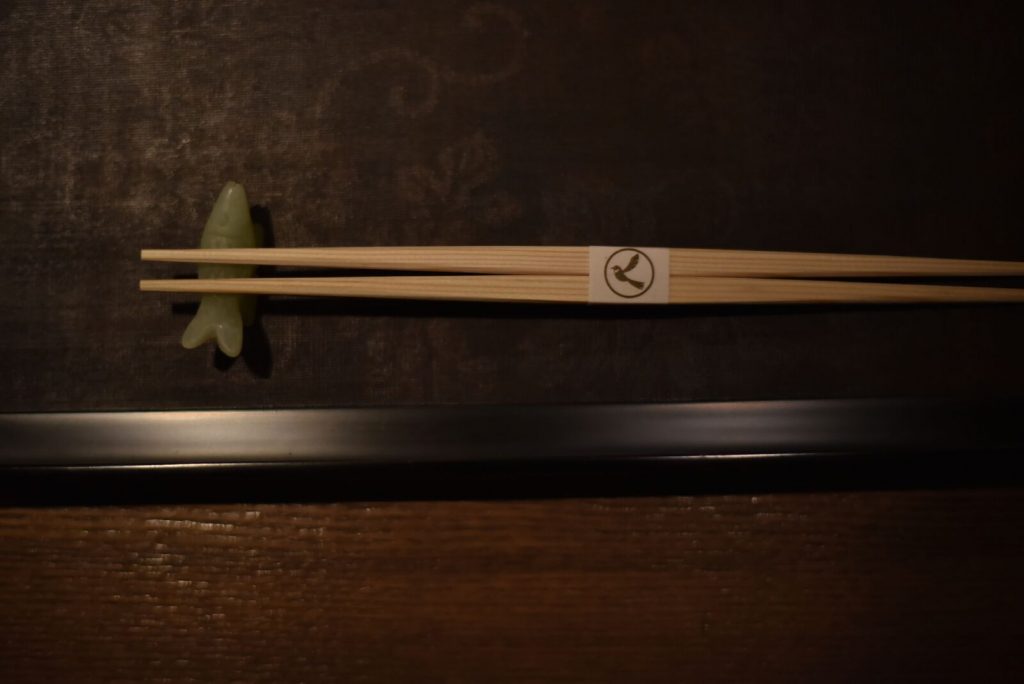 Independence at the age of 34. Keeping the 15,000 yen course on the menu through tough situations.

You opened Jushu in Aoyama when you were 34 years old.Were there any problems ahead of the opening?

Mr. Sakizaki:
I had learned the steps required for opening a new place, like negotiating with government departments and finding vendors, while at Nishiazabu Taku. I was also gradually preparing by creating the style and size of the restaurant, and also purchasing dishes, so there was nothing in particular that I found difficult. But after opening there was always financial anxiety. Due to the Tohoku earthquake, in its first year my place remained unnoticed.

There was one time where we had no customers for three straight days.

Three straight days! That must have been difficult.

Mr. Sakizaki:
Since we can’t serve something that is not fresh, we had to eat the leftover food.

As a result, I gained 7.8 kg in my first year. I had plenty of time, so I experimented and tried to keep a positive outlook, but I was worried, since I opened a restaurant with debt, and didn’t know if it would improve. Since opening the restaurant, we open only at night with only a “Chef’s Choice” course, which is 15,000 yen. But back then I had many concerns: “Should we open for lunch?” “Should I make a lower-priced course?”

But those weren’t my style, so I stuck with the concept that I had from the beginning.

What is that concept?

Mr. Sakizaki:
I want to cook and serve the best food of each season to my customers.
I thought that 15,000 yen was the lowest I could go while still using the various seasonal ingredients I wanted to serve.

So it was your priority to use select seasonal ingredients. If so, you will use natural products which come at a certain cost.

Mr. Sakizaki:
Yes. Nowadays there are farmed fish and greenhouse vegetables on the market and it makes it difficult to know the best season for each ingredient. In the field of Japanese cuisine, there is a custom to value the “first catch” of a food, so they do not eat ingredients when they are in season.

For bonito and pike conger, for example, restaurants began service it earlier and earlier, so customers are tired of it by the time they are actually in season.

Since my training period, I had been wondering about that general trend, because I want customers to eat food when it is the most delicious. It can’t be helped that Farmed fish and greenhouse vegetables are readily available, but we, chefs of Japanese cuisine, want to share with our customers, “This ingredient is best eaten now!”

So, I select my ingredients carefully, even in tough economic periods.

Honestly, it is because of my wife that I can do so. My wife worked and supported me from the beginning, so I really appreciate her. 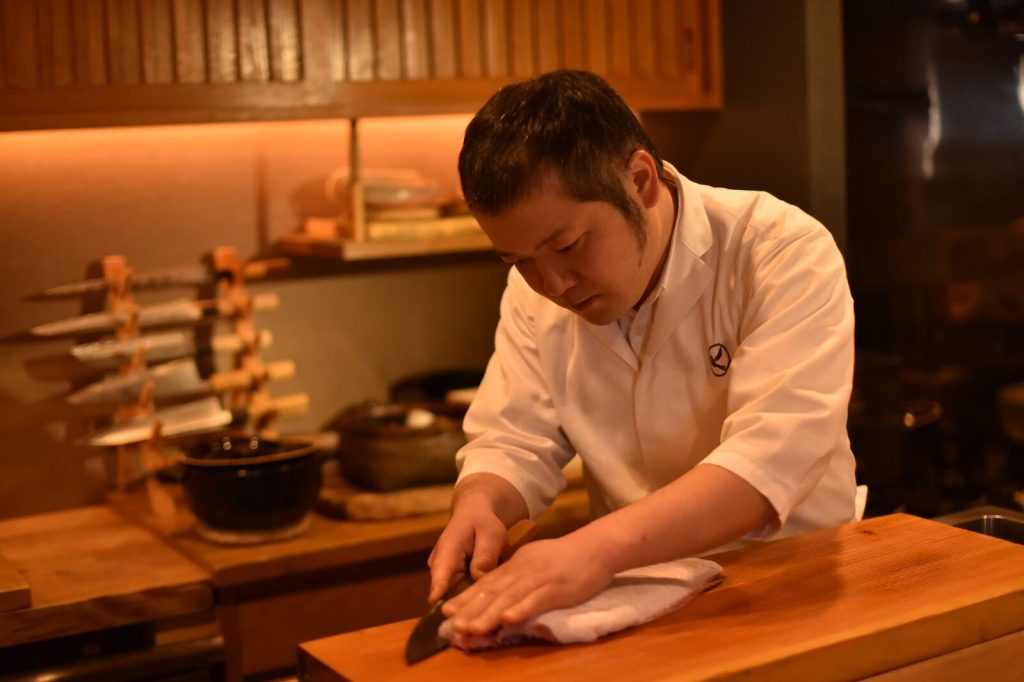 The number of customers gradually increased through word of mouth, so after one year his restaurant business plan was on track.
In 2012, he received two stars from the Michelin Guide and have maintained it.

Was there anything you changed after the opening?

Mr. Sakizaki:
Currently our course has nice items, but we did have more items the first and second years.

We used to serve 12 to 13 items in portions smaller than they are now, but I wanted to place a greater emphasis on each item so we changed the menu.

What made you think to place a greater emphasis on each item?

Mr. Sakizaki:
It was also like that at Totoya, but there is a French restaurant in Tokyo that I go to, and they powerfully express the appeal of their ingredients.

For example, you can feel the taste of the rich beef, and it’s very a satisfying, “beefy” experience. Instead of serving many items in small portions, as is common in Japanese restaurants, it suits my style to put a lot of power onto one plate, and besides, I think it lingers in the customer’s memory longer.

So you expressed your individuality with strength. On the other hand, even though you call it the “Chef’s Choice,” you change the food depending on the customers.

Mr. Sakizaki:
That’s right. I listen to their likes and dislikes and make a course to suit the customers.

I know the tastes of the regular customers, so I make adjustments. For example, I reduce the number of items and add more volume to the main dish, or for the customers who do not eat much, I add small dishes in order for them to enjoy greater variety.

For regular customers, you serve a varied menu more like a dinner menu, right?

Mr. Sakizaki:
For regular customers, I prepare two to three small starter items, along with rice, and sashimi, and sometimes serve only grilled only. If they request it, I serve fried dishes, like what we cook for staff.

It’s cool to have a regular place that you can stop by after drinking at other places.
By valuing my customers like this, I think more people will come regularly.

Mr. Sakizaki:
There are restaurants that serve ‘course’ meals that have been set beforehand, with no concern for the customers’ tastes, but I don’t want to do that. The “Chef’s Choice,” of course, offers “choice.” The chef is responsible and serves what he thinks is delicious, but that also includes the assumption that we will cook your choice.

It’s important to push the ego of the restaurant, but it to make sure that customers are satisfied.

“Choice” assumes the presence of the customers, right?

Mr. Sakizaki:
There are people who like places with stubborn masters, and my way isn’t the only way. But I do not want the “Chef’s Choice” to be food that we force upon them. 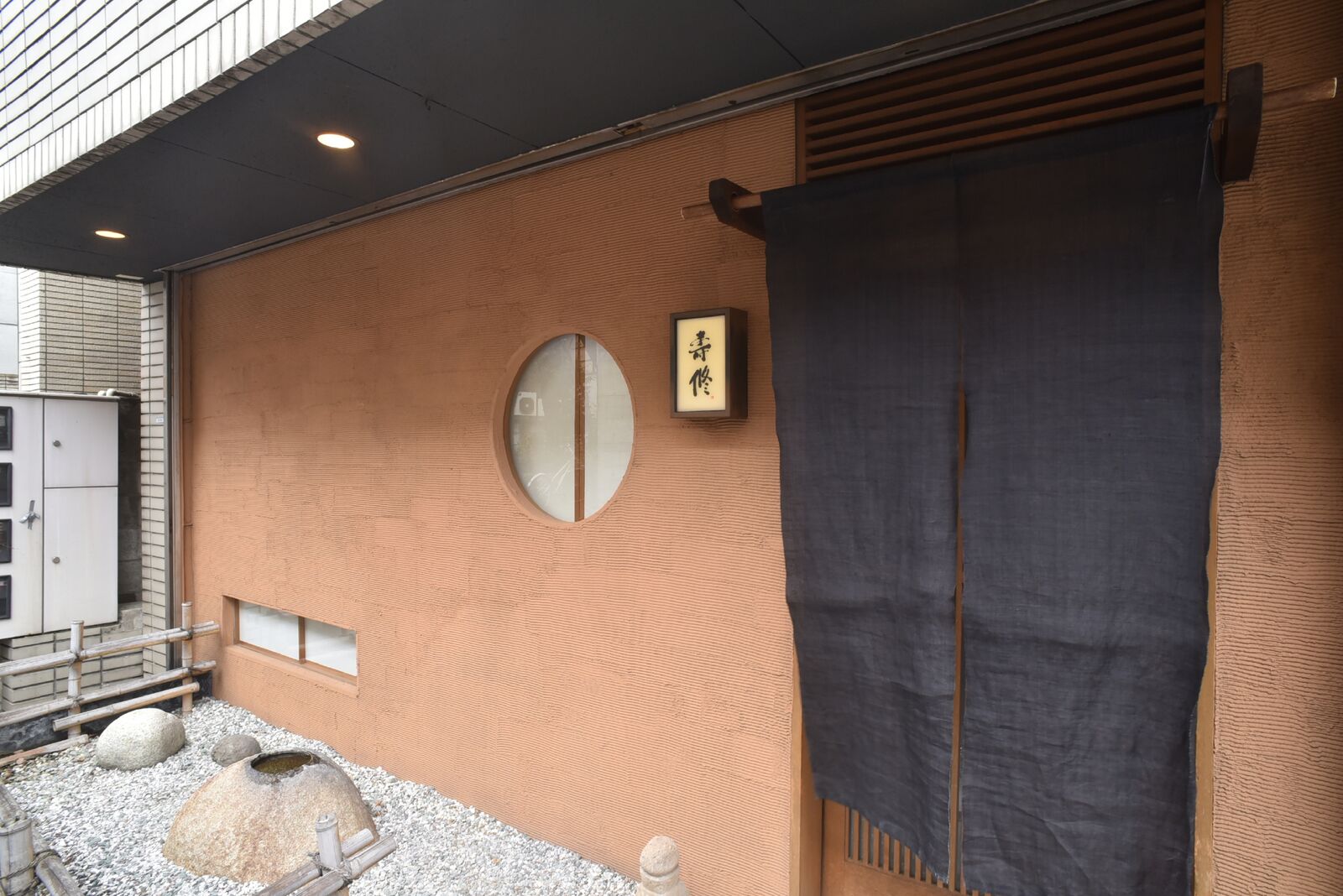