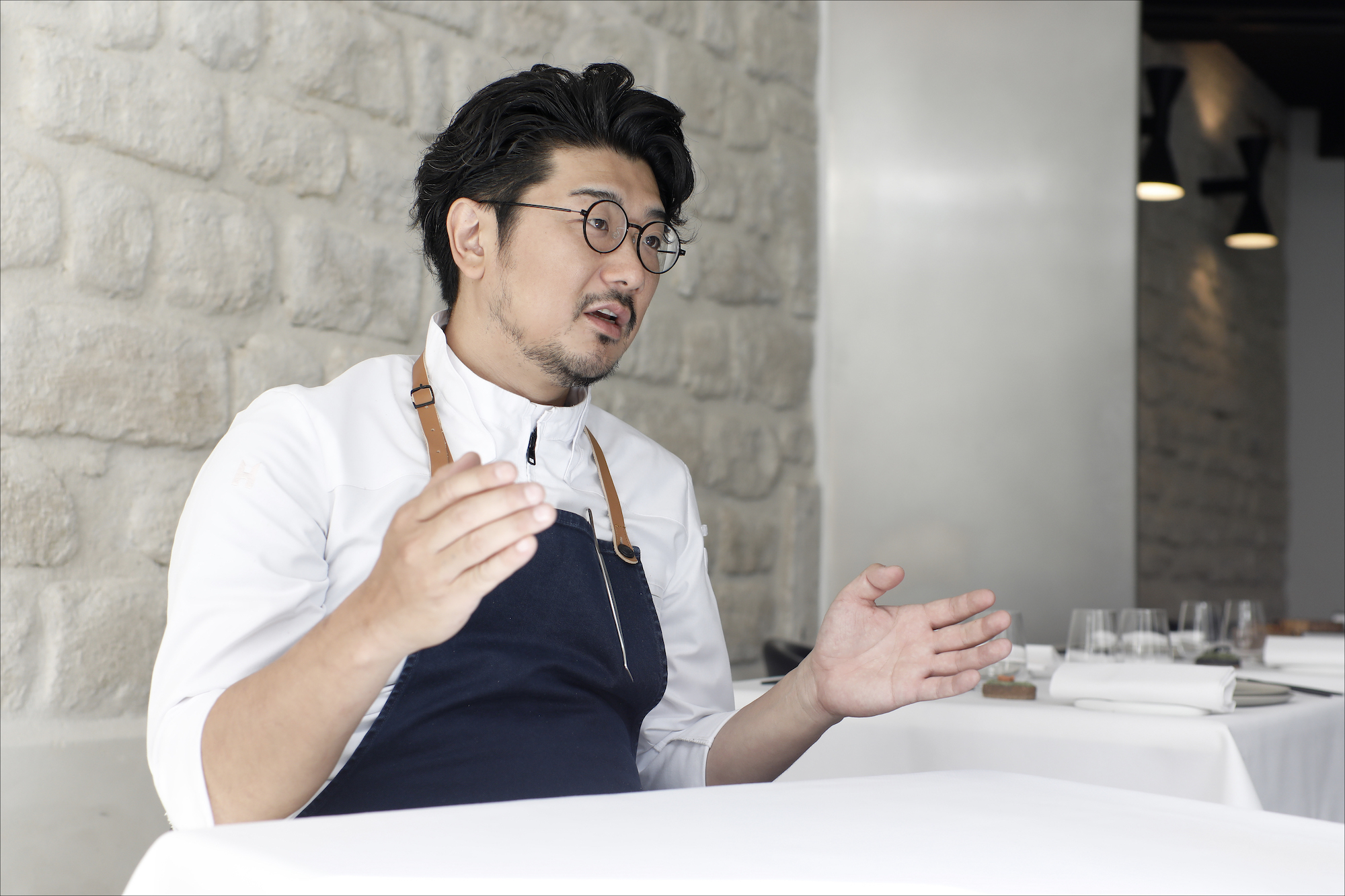 Born in Kumamoto prefecture in August 1976. Mr. Ryuji Teshima was strongly motivated to be independent since when he was a teenager. He chose a profession in the food industry as a shortcut to be independent. He heard that his friend became a "cook” when he was 16 years old. Since then, he started aiming at the way to become a chef of French cooking. He worked at a historical French restaurant "Takadaya" in Kumamoto City, Kumamoto Prefecture at the age of 19 and found and got shocked by the profound difference between their technique and his technique. Mr. Teshima was fascinated by the endless depth of French cooking. 20 years after, his dream has come true in Paris. He won one star in the Michelin Guide France in 2016. He was awarded a medal from the city of Paris. 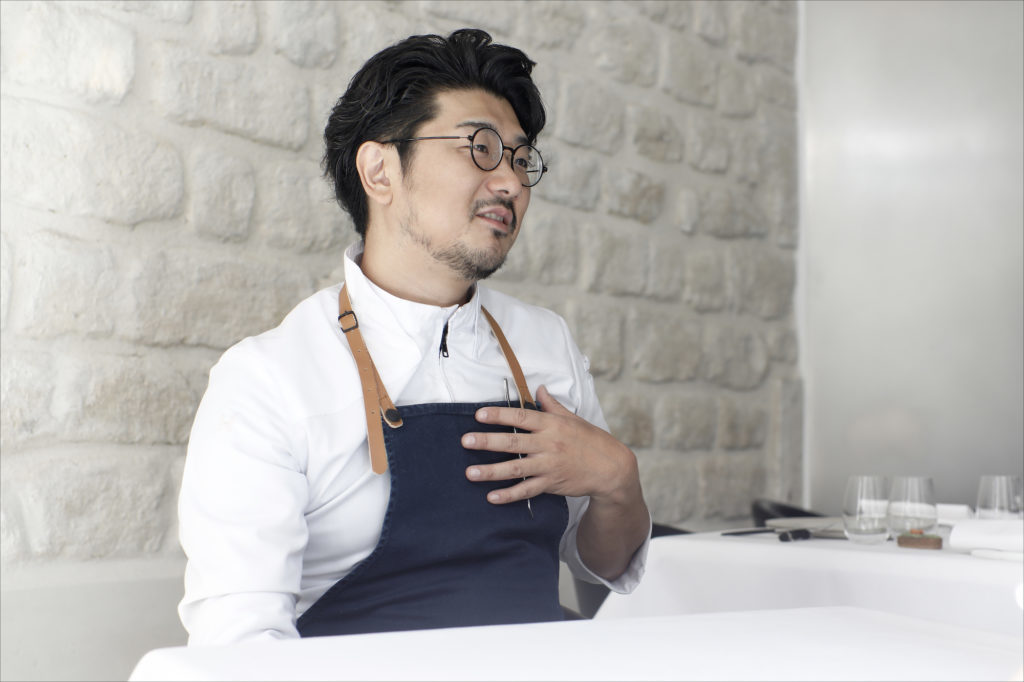 The way of a boy, who wished strongly to be independent, to become a French chefs in France

Please tell us the story about the start of your career as a chef.

Mr.Teshima :
I just wanted to be independent. While I was searching for the means to be independent, I found that it was a job in the food and drink industry. Because I felt I could continue it and it was a shortcut to be independent. I started to be motivated to become a chef when I heard rumors that a friend of mine became a “chef” when I was 16 years old. I felt a little jealous about the coolness of the sound and began to seek for a way to become a French chef.
I did not go to a vocational school, but when I was 19 years old I started to work at a local historical French restaurant “Takadaya”, I was standing in the kitchen since then. The difference in competence of them and mine that I faced there made me realize the endless depth of French cooking like a blue sky.
Afterwards I worked at several French restaurants. I worked as a chef at a wine bar in the evening, and also worked at an another restaurant during the day as a part time job to save money as I wanted to go to France.

Did you go to France soon after that ?

Mr.Teshima :
Before I went to France I went to Tokyo because I felt I had to go there. There is a restaurant called “Chez Ino” in Tokyo. It is a historical classic famous restaurant where all the chefs of French cooking worship.

Although there was someone who could introduce me to work at “Chez Ino”, the timing did not allowed me to do so. I could not work there unfortunately.
At that time, I heard about a working holiday visa, and I decided to go to France with that. 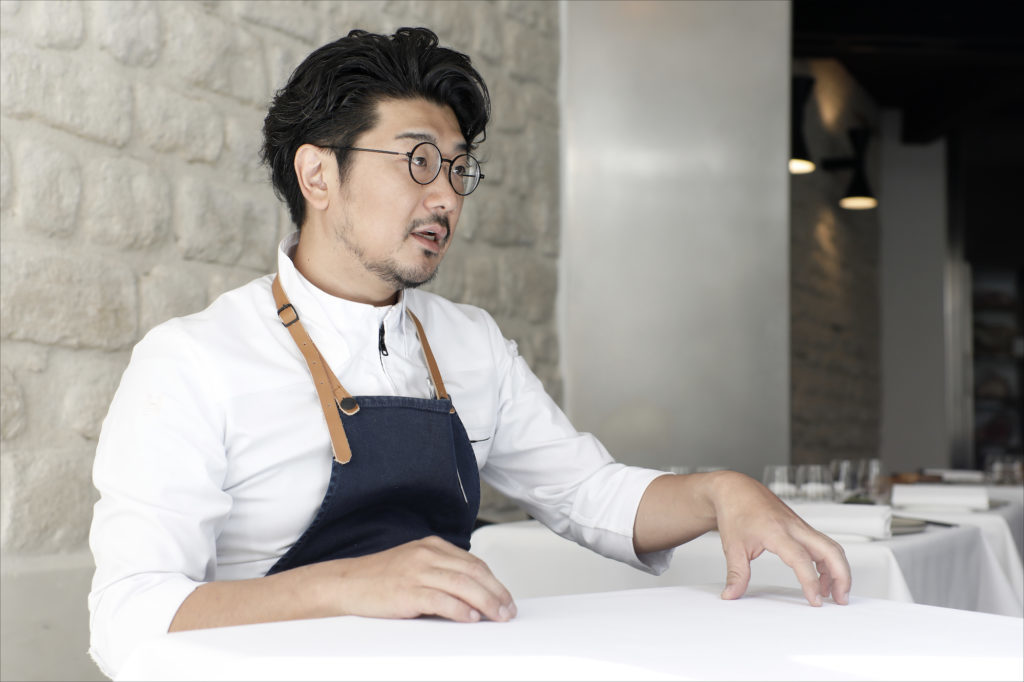 Mr. Teshima’s professional life in France and chefs who influenced him

How was the beginning of your professional career in France ?

Mr.Teshima :
I sent dozens of resumes to numerous restaurants including three Michelin-starred restaurants. I read my resume out at job interviews, because I could not speak French at that time. I was accepted by “Taillevent”, “Lucas Carton” and “Guy Savoy”. Among them, I chose “Lucas Carton”.

Why did you choose “Lucas Carton” ? Is this because you have a Japanese qualification of sommelier ?

Mr.Teshima :
That’s right. “Lucas Carton” is a restaurant that invented and spread “wine pairing”. And the selection of wines is wonderful. I wished working there as a chef.

After I entered, Mr. Alain Senderens said “I want to start a bistro” and changed the name of the restaurant from three starred restaurant “Lucas Carton” to the bistro “Senderens”. I worked at the time when the restaurant gave back three stars and started the bistro. Although it was a bistro, the dishes were always gastronomic (laugh).

Who has affected you as a chef ?

Mr. Michel Bras’ cooking was shocking for me. I have read his book “BRAS” many times. He is  great because he made his own unique dishes although he was not a experienced chef before. I wanted to be a cook like him who could become a source without belonging to a faction as a chef.

Mr. Olivier Roellinger is also stimulating for me with the same reason. Mr. Alain Passard had a master but he has created his own style. Mr. Barbot also has its own identity. I think they are purely cool. Mr. Aida always says me that “see/experience something good” and gives me a good influence. 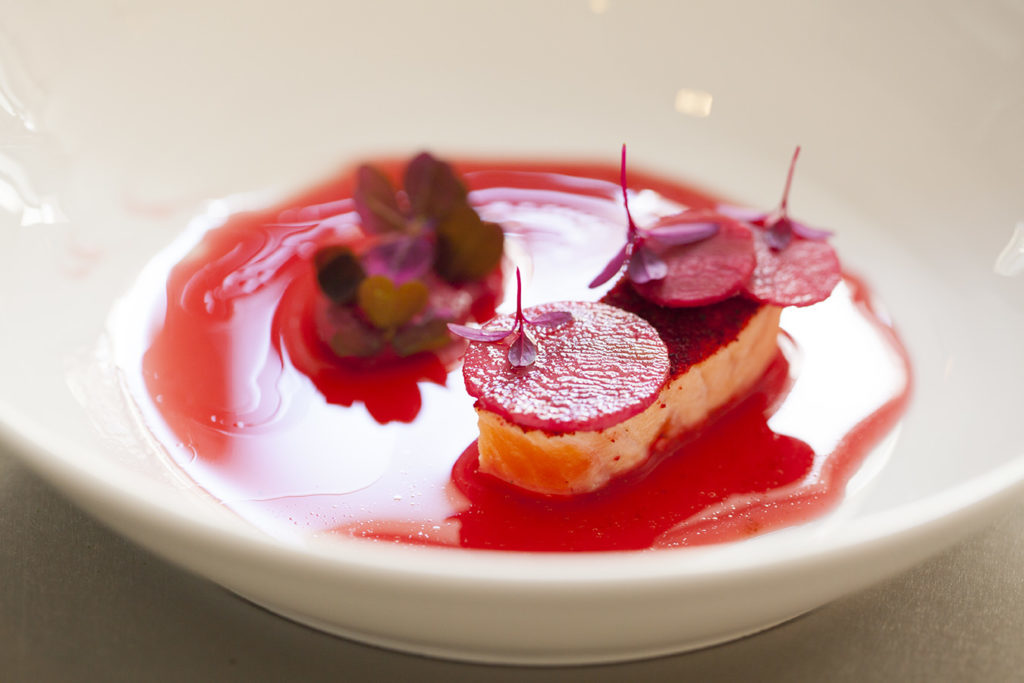 The inspiration and the philosophy of Mr. Teshima

Please tell me about your creation of the dish.

Mr.Teshima :
What I am careful about when I cook is to care each customer. When making a plate, I wonder if this person would be pleased and I hope that not only this person but also this customer’s friends will be pleased.

Everyone in the kitchen does setting out the dishes. This is also important not to keep customers waiting. Recently it is getting longer to spend the time for the things for which the time has to be taken. I think that the decorative part has diminished compared to before.
The staff members said me that they wanted to come to eat with their friends. I would like to make my restaurant to be always so.

Regarding inspiration, it is important to eat a lot and know the taste of ingredients. And there is something which you can see if you do not see the ingredients as things. Sometimes it is inspirational to try to know about people involved in foodstuffs, the soil, and all others around foodstuffs. And it gives me an inspiration by having an imagination about them.

There are trends that can be expressed in various words such as “modern” and “gastronomic classic”. The cooking of Japanese chefs is built into French cooking like “Japanese pop”, for example. I’d like to create “Teshima Ryuji’s cooking” which will not be categorized in there.

I define my identity by doing French cooking. What can I do with French cooking ? When I have thought about it, I found that I wanted to make an unique dish that reflects my philosophy. And I wished to become one of a source of cooking styles.

There must be philosophy on dishes. What would “Chez” say about the restaurant? The word “Chez” refers to “the house of someone”. The dishes must have the philosophy and themes. 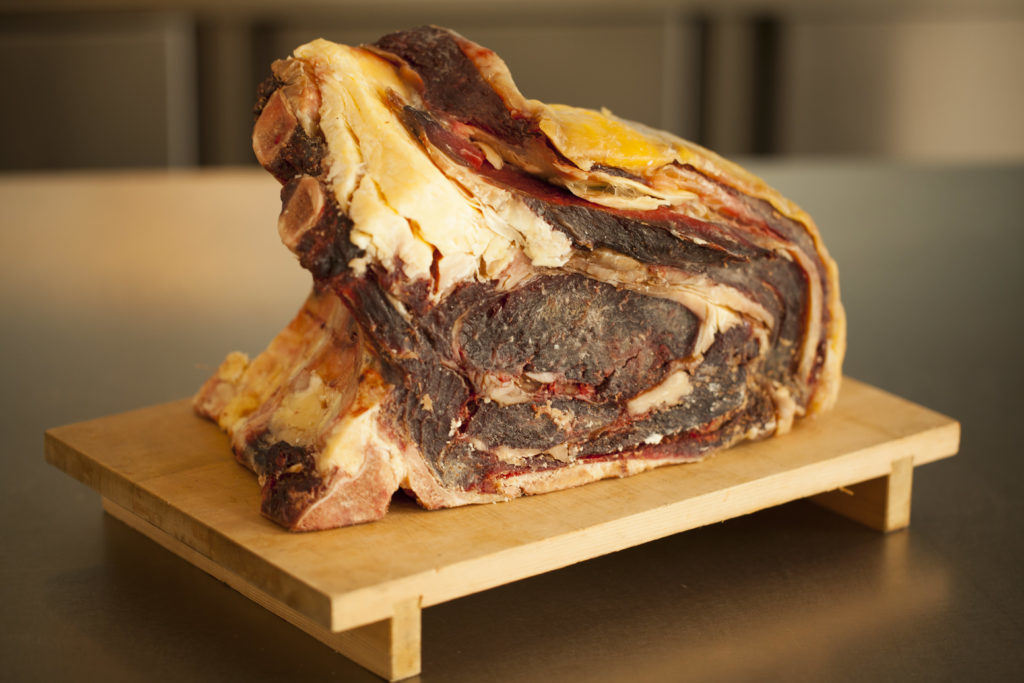 When did you feel that your cooking level reached a level where you can have your own restaurant ?

Mr.Teshima :
Learning cooking never finishes. As I felt so since I started my career. There is no end for learning it. This is like a blue sky never ends. I am still not confident about my technique even now. It cannot be finished. But since when I became convinced of my own judgment that “This is delicious” “This is not tasty”, I began to think that I might be able to have my own restaurant.

As for the timing of opening my restaurant, according to my plan to do so. I had no choice but to do it at this timing.

You finally opened your own restaurant in Paris in 2014 and became independent at last. How did you decide the timing ?

Mr.Teshima :
In my life planning, it was actually planned to open in 2012, but it has been postponed.

Mr.Teshima :
I am making a plan for life from my mid 20’s. Till when I become independent, when I marry, have children, build a house, and so on. There is a ten-year plan. I have also created the same things of three or five years. I am making efforts to reduce the time to achieve these objectives.

What were you doing before opening “Restaurant PAGES”?

Mr.Teshima :
I visited around the European countries and the U.S. for eating there. And I worked or trained at many restaurants. I also worked at a butcher and a fish shop to know about ingredients.

What were hardships in your professional life ?

Mr. Teshima :
Well, it is the racial matter,a painful thing to face in France unlike Japan.
However, I could continue my professional life because I like to eat and like to cook. The flow of work in the restaurant, the faces of customers pleased, that visible results come out, these give me refreshing feelings and that is irresistible. 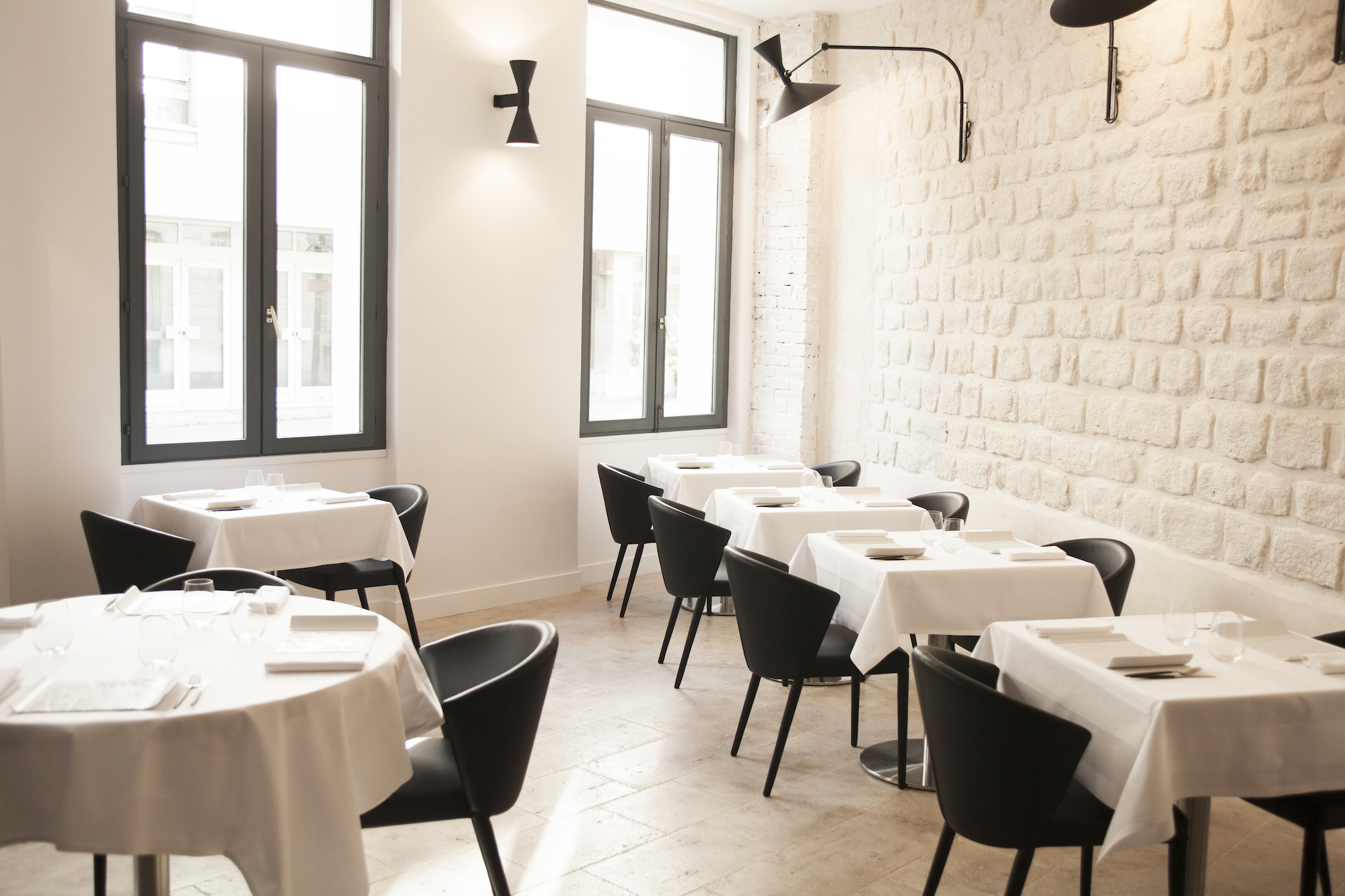