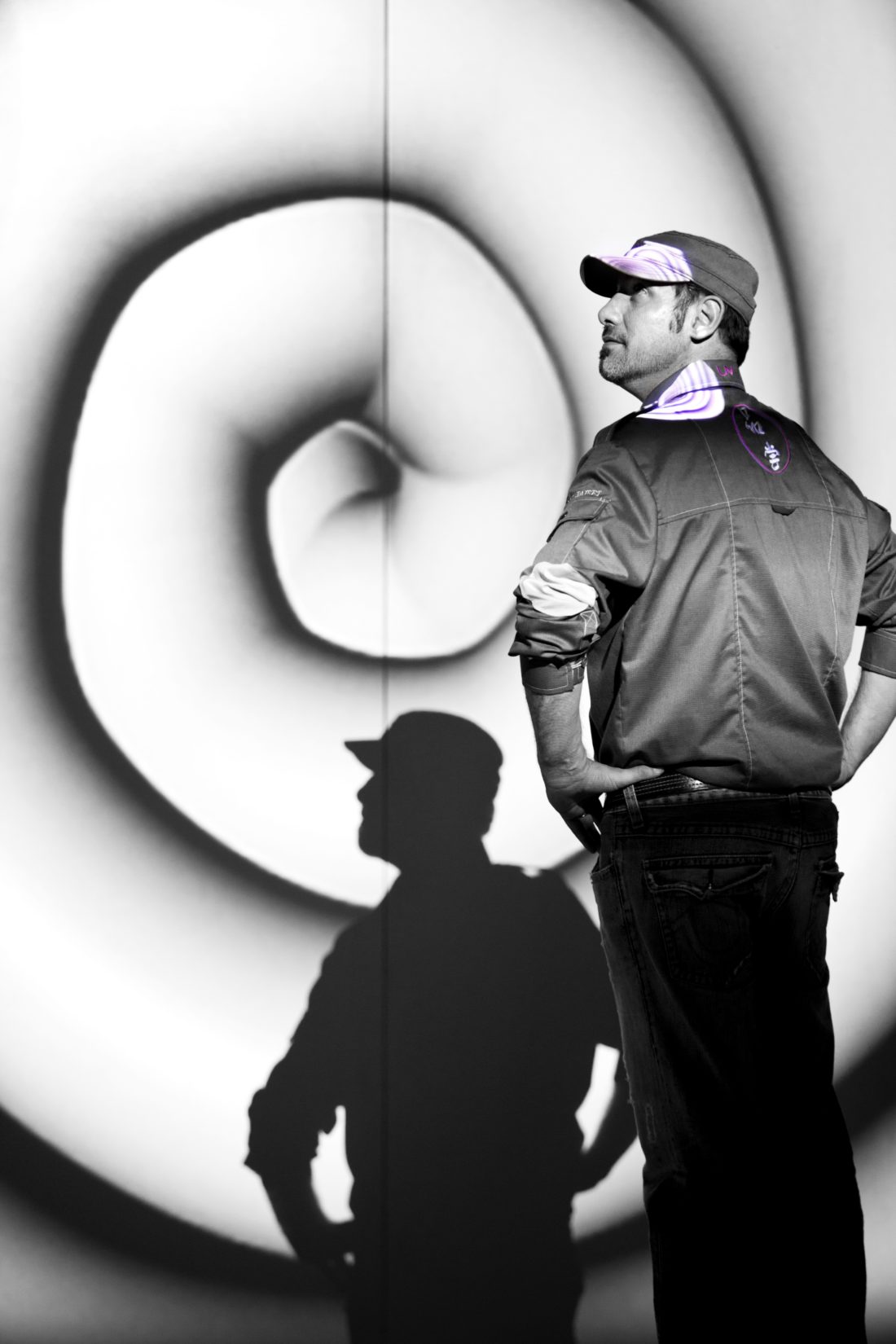 The value of taking a meandering path through the cooking world

Your career hasn’t gone in a straight line. You’ve had a lot of breaks, or cuts, as you call them, where you’ve worked as a chef but not necessarily in restaurants.

Mr. Pairet:
After the first restaurants in Paris, I had a pause that lasted for three years, where I joined the school, originally the national school of the charcutier, and I discovered charcuterie, a fantastic trade. To train people who wanted out of charcuterie, to be able to do some other events. I stayed quite a long time, because everything I learned that was technical came out of that school. Because I was lucky enough to be in charge of the demos. So, the first year I had one or two classes, it was good to train, because in order to train you have to know what you do. And we would demonstrate for 20-50 people, once in Paris and once in Provence every week. Most of the demos were done by MOF (meilleur ouvrier de France), best worker in pastry, charcuterie, of cuisine, we would do our demo, but then watch the other demos, so we learned a lot. So, this was three years of technical learning, outside of the pressure of service.

Why did you leave, if you were a natural teacher?

I wanted to do a research lab. I was feeling we were doing some demos for catering people, but we were doing some recipes that weren’t right for them. I had the plan, the whole plan for the lab, and they just refused. Ok you refuse, I go. “Ok you can go.” (laughs) I go.

So, I registered to become a researcher for Nestle, they have a big central office in Paris, and in that office they have facilities to do some research. I wanted really to do research, that was my goal, to do research and find things. But the salary was modest, and when they offered me the position, I said everything is fine, but maybe the salary is not right? I remember there was an agent, he was so happy, a smile on his face, but when I said this he went like… changed color… (laughs). I lost the thing. Otherwise I would have done this.

And afterward I got lost a little bit. I ended up to be a disc jockey, don’t ask. I had one year — a barman and disc jockey — it was not related to cooking. 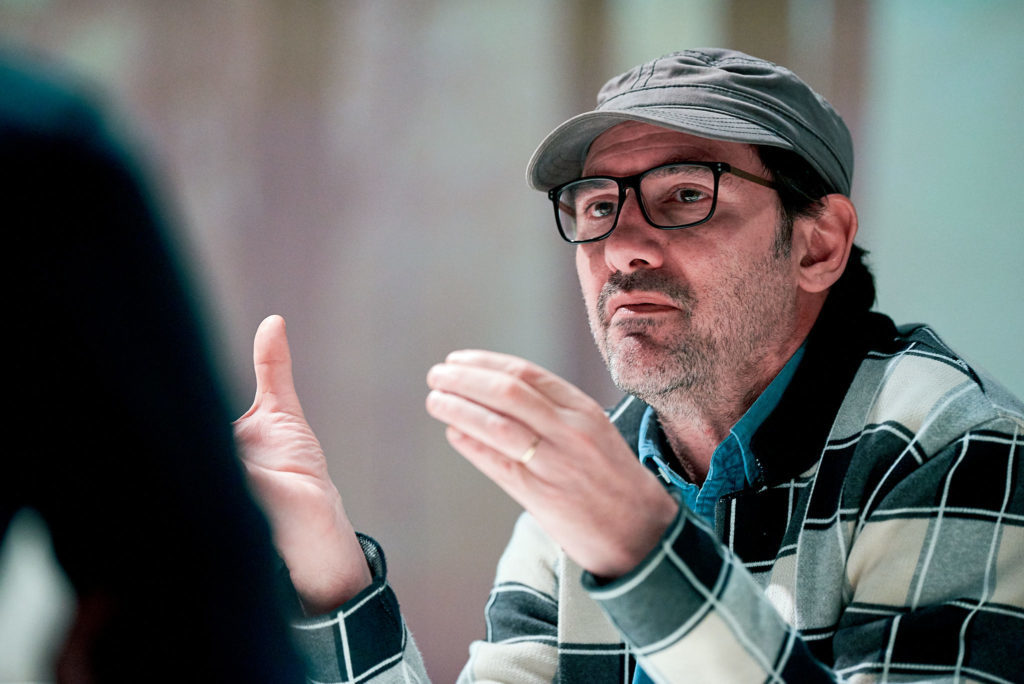 Getting back to his calling

How did you get back on track?

Mr. Pairet:
I had a good friend from the hotel school who was working in Hong Kong as the maître d hotel, and they proposed me a great position. I would not get a room like this in France with such a beautiful kitchen. I jumped on it, and that was the real start of my career as a chef. I would stay with that group two years in Hong Kong, ending up as group chef de cuisine. It was opened by Paul Bocuse in the 80s and it was beautiful. For me it was a jewel in the crown, my first fine-dining thing, it went quite well, I had a big title. But it was not really what I wanted. I wanted to cook, and then from this that’s where I would leave for Australia.

And Australia has been cut short by another interesting period of my life that I went completely broke, where I spent more than six months in London. I was trying to find a position in London, there was a fantastic energy, early 90s, mid 90s, and I could not find a position there, but I was starting my application to go to Australia. I went to Australia based on the advice of a critic at the South China Morning Post, and she said, Paul you really should go there — we were quite close — there is very strong energy there for cooking, and it’s true, there was. But I had a fantastic time in London. So there have been some cuts, you see, and then there’s maybe one year before I went to Hong Kong, and probably another cut after I come back from Istanbul. There have been some cuts, sometimes they are quite beneficial, you have the time to step back a bit, reassess a little bit and see what you want to do.

Has this made you more lenient or understanding as a boss?

Mr. Pairet:
No, but sometimes I’m disappointed by clever people. I like to think that the C.V. is irrelevant and the passion is the most important trait you can have in a kitchen. It’s true, yes and no, but not everybody passes that first step. I probably failed mine also, but then found my footing somewhere else, though I learned this from experience. When we try to give that chance to that guy that seems to be more educated with the right reason, the right passion, sometimes they will melt from the burden that is inside a kitchen — which is not school! again is not TV! is not the internet! Yes, you will learn, but you need to spend some time! You will pay your dues and this, if you don’t get it, it’s difficult to cook professionally at the right level.

I’ve done it, my way, and I don’t think you need to suffer, but you need to go through that basic training, that background that you keep for the rest of your life, and you can only keep that passion… it’s still a difficult trade, so if you don’t endure a little bit at the beginning, it’s difficult to accept. There are a few chefs that might be, uh, elegant every day, working six hours and still be successful. I still haven’t met them. (laughs) I’ll be honest with you, any chef that has not been in the tough environment that is a kitchen… it’s not cooking at home. Cooking at home is beautiful, nothing wrong about it, on the contrary, but professional cooking becomes something different. So after, you need to bring back that passion in the world of difficulties and hurdles, you need to keep that passion… I have always kept the passion and it has been stronger than the difficulties, luckily. But along the way, I think I’ve seen more than 95% of the people that I met in the kitchen that had talent to cook, probably more than me, they left, one way or another. They are still in the trade, sometimes they are selling some food, probably I could have done this too, I was hesitating, what do I do, do I do research, I could have done another step. I have no regrets that I stuck to my guns but sometimes it’s a matter of fate. Yes you can always say you learn a lot from mistakes. But you can learn also when you don’t do mistakes! (laughs) 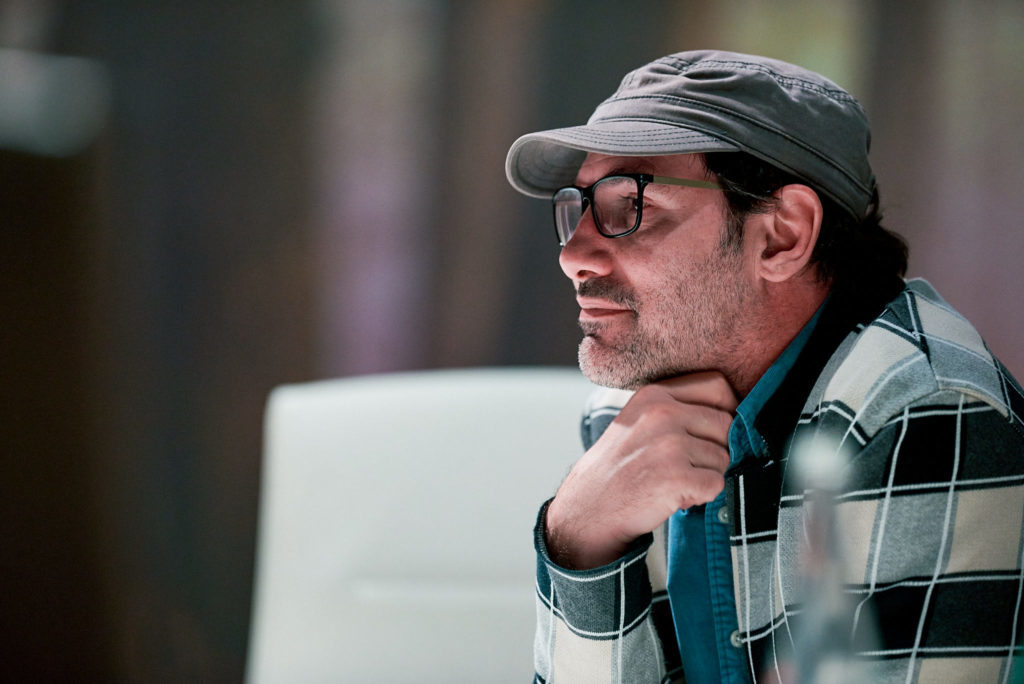 Finding passion in the face of obstacles

Could we talk a little bit about obstacles on the path to get three stars?

Mr. Pairet:
There’s been a lot of obstacles, but they are ones that forge something. Everybody has his own path. I think the stamina is important, the mental stamina, the capacity to carry on with a project. And ultimately this can be sustained only by a passion that you nurture. You nurture the passion. It’s not something that is a natural everyday passion, sometimes you need to step back and remember why you are doing that trade. It’s a bit like when you are with somebody, you can always look at the other girls, there are always some beautiful girls around, but sometimes you need to remember why you are with somebody. It’s the same for cooking, you need to evaluate it a bit like a love story. Why do I still love cooking? The day I will have enough, I will probably quit. You need to maintain that passion, to actively maintain it. That’s a lesson from my old friend from the hotel school. He was right.

How do you nurture that passion? What do you do?

Mr. Pairet:
This interview might not come out right. You will never get tone, it’s a bit detached, it’s a bit funny. That’s ultimately the way I see what I’ve done. (laughs) 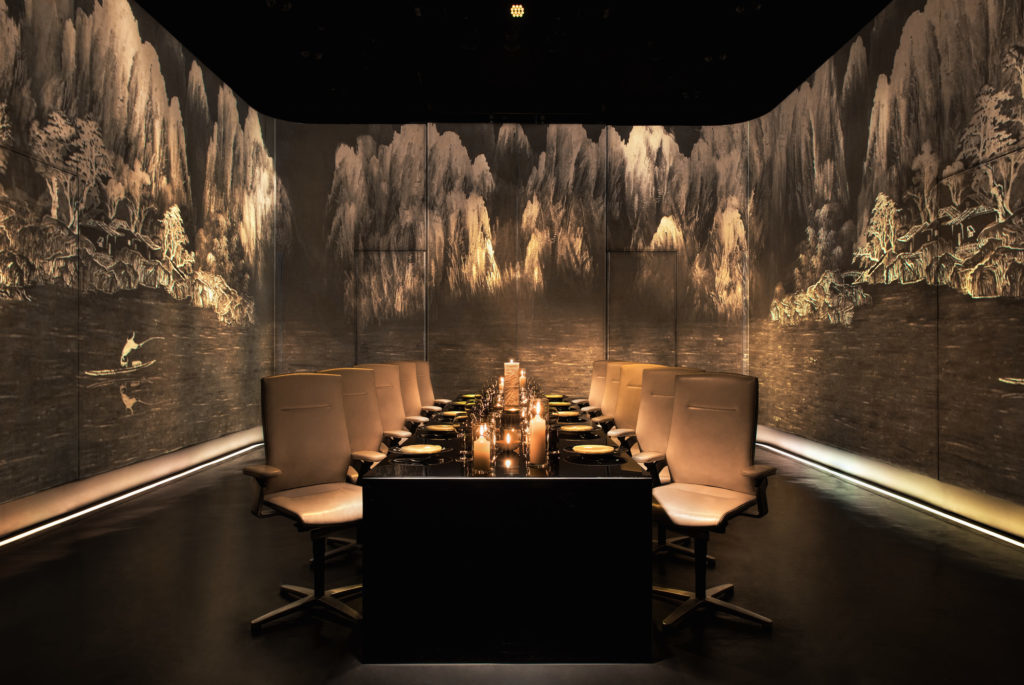 I’ve worked for, collaborated with, and interviewed Pairet countless time over my dozen years in Shanghai, but this interview, which ranged far and wide, dug deep into the details of his past, including both successes and mistakes, and left me seeing the man in a new light. Always quick-witted, ready to make a joke as easily as a piercing observation, Pairet has taken on a new ease since winning his third Michelin star and ascending to the elite world of other chefs with three-star restaurants. This was clear in his opening up about his past and his willingness to talk about how his career has not always taken a linear path, but has been marked by pauses and diversions – or “cuts”, as he calls them – and how the hard work he talks about came in conjunction with doubts about his progress towards achieving dual goals of opening Ultraviolet and having it make a global impact. In short, he has mellowed, and it was only in this interview, which was strongly driven by his own idea of what story he wanted to tell, that I was able to pick up on and appreciate the change. No doubt this sense of being settled and respected around the world will lead to an even more fruitful creative process in the future, as he embarks on the long development process for a new Ultraviolet menu this year.
Prev Page
Next Page 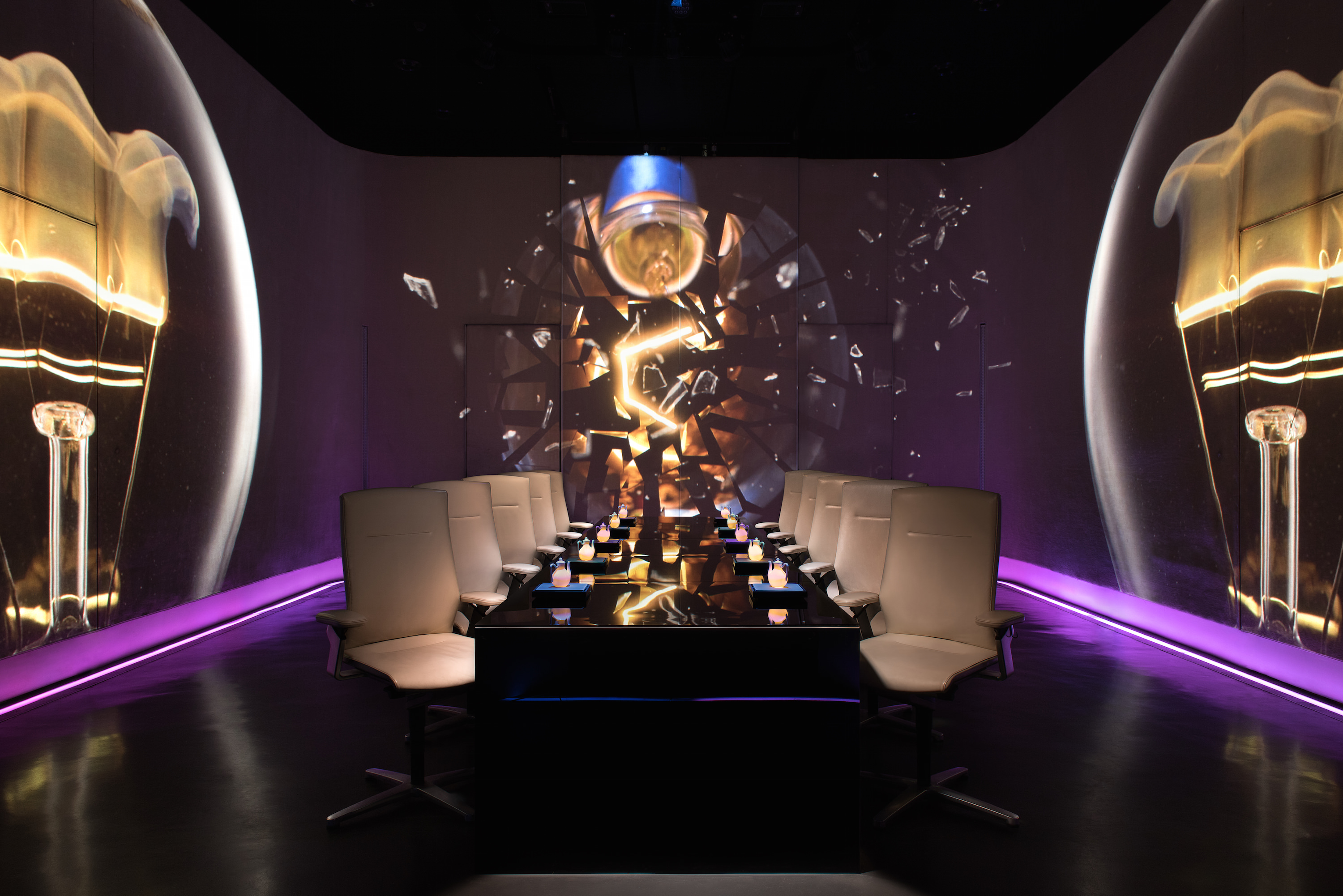