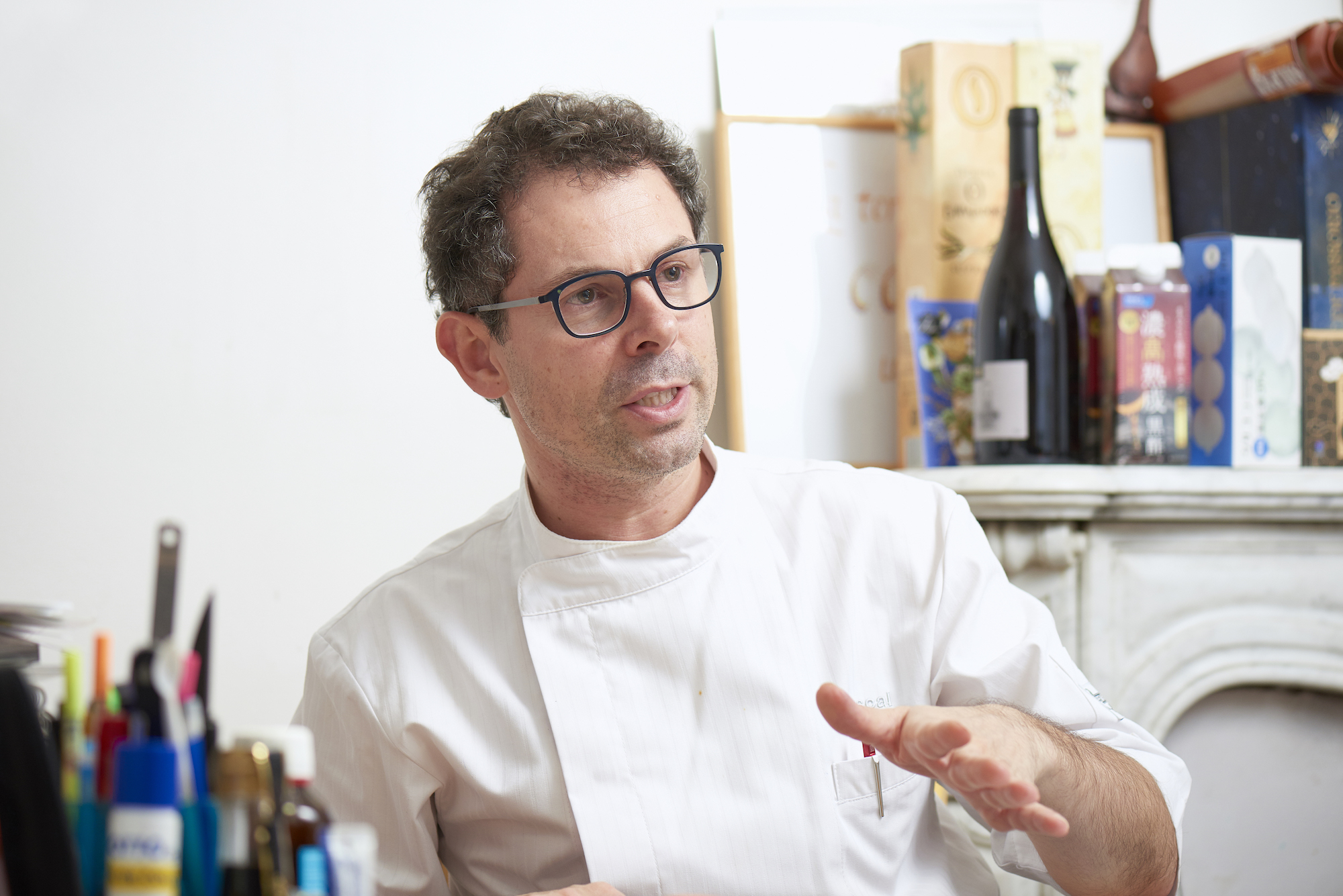 French chef Pascal Barbot became independent at age twenty-seven. Five years later, he received a 19/20 in the Gault & Millau, one of France’s first restaurant guides, and was selected as Best Chef. His restaurant, Astrance, won three Michelin stars in 2007 and has been at full occupancy for sixteen years running since its opening. Barbot says that half the seats at the restaurant are occupied by regulars. From the year 2000 to 2016, amidst changing trends in French cuisine, Barbot’s dishes continue to fascinate gourmets. So what are his secrets to success? 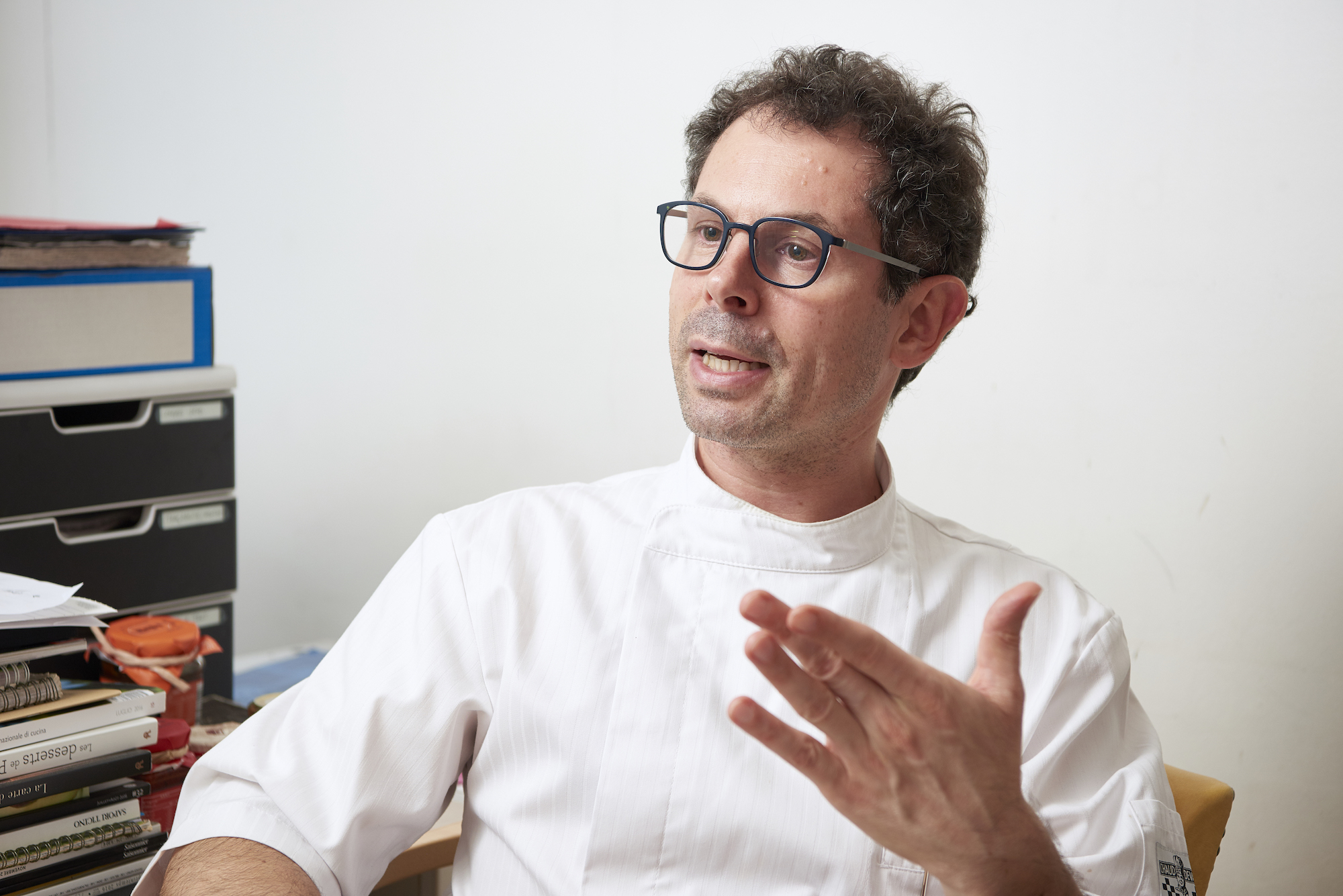 Becoming a cook, not a chef.

Barbot:
I come from an area near Vichy in the Auvergne region. We always ate delicious food at home, and my father grew vegetables in the garden. After returning home from school, I would make the rounds to local farms to pick up milk and eggs.

We lived close to nature. We would go to pick raspberries and string beans, and would raise rabbits and pigeons. Hunting and fishing was also a regular part of life. Everything we ate was fresh and of the highest quality. Picking mushrooms and chestnuts put you in tune with the seasons. I really learned about seasonality.

I believe that understanding seasonality is essential to proper cuisine. My mom made home-style food that, whilst simple, was delicious, and I loved her cuisine with fresh and tasty ingredients. I was enthusiastic about exploring the cuisine of French terroir.

While no one in my family had ever been in the restaurant business, I decided to take the plunge. Many who enter the culinary world are part of families who have been doing so for generations, so I was an outsider.

How did your career as a cook begin?

Barbot:
In those years, we didn’t have all of the cooking programs on television like we do today, and I wasn’t very familiar with restaurants, so when I was fourteen I entered a four year culinary course at the hotel school in Vichy.

However, I never intended to become a Chef. I wanted to become a cook, who respects the products and who creates delicious dishes.

In which kind of restaurants did you work at first?

Barbot:
While at school, I trained at a small restaurant in the Parc naturel régional des Volcans d’Auvergne. This area is blessed by nature; it has protected wild goats and guinea pigs. The restaurant served local dishes such as coq au vin, crêpes, boeuf snacké, truffade, and la pachade.

The place is not far from Michel Bras’s restaurant. This area is right in the center of France, and being a poorer region, the most common ingredients used in the kitchen are things like pork, cabbage, potatoes, or bacon. The region does welcome tourists, mostly domestic, who enjoy travelling on a budget, by going camping for example. There aren’t any luxury hotels.

This restaurant, only had 5 or 6 staff including the owner and his wife. I learned to make classic style dishes like coq au vin or pounti aux pruneaux.

After that I trained in Paris at Maxim’s. It was my first time in Paris. I then trained at CLAVE, a one-star restaurant in Clermont Ferrand in Puy-de-Dôme. I had never heard about Michelin-starred restaurants before, so it was a good opportunity to learn different styles.

It is between 14 and 16 that one comes into its own and learns about life. These were valuable experiences where I learned about different ways of life, how companies work, what work itself is, about restaurant and kitchen brigades, with the chef, the second, a patissier, a sommelier, a maître d’hôtel and so on.

Getting a lot of exposure at that age is crucial. While the city offers a plentiful supply of things like cola, bread, and milk readily available, people in rural areas might cycle six kilometers to buy necessities like bread. Seeing those differences in way of life is also part of a cook’s work or training or, should I say, education. Learning about all of these things is important. 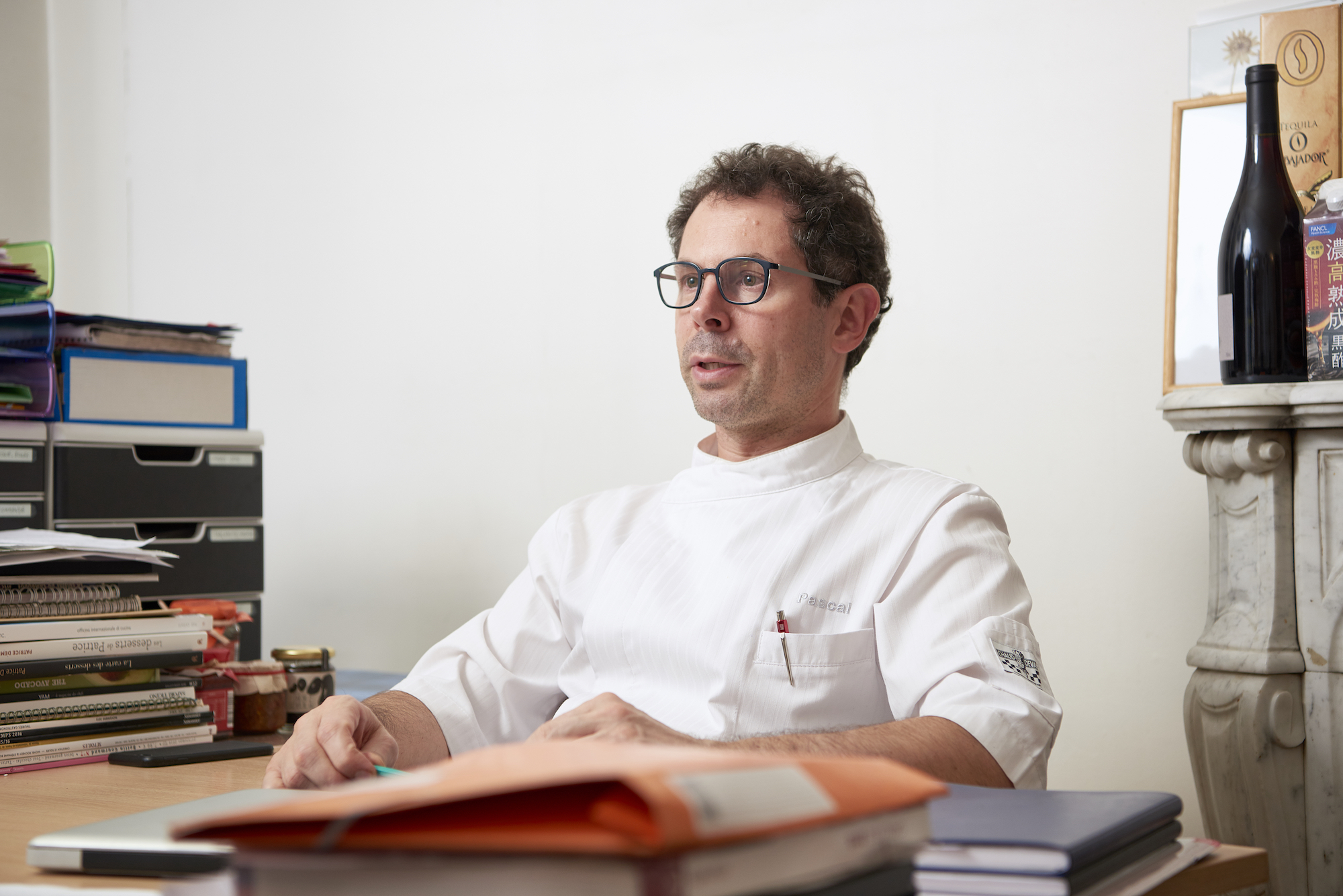 Tell us a bit about what happened between your graduation from the vocational school and getting to where you are today.

Barbot:
After graduating, I went to London to help with the opening of a restaurant, the chef and the team were French, the patrons were all British. All the ingredients, truffles, foie gras came from Rungis market in France.

The restaurant was run by a Japanese company, they wanted to be the first in Europe to get a Michelin star and they got it. This was Les Saveurs. It closed, the chef was Joel Antunes. He is an amazing chef, in the US now; he had worked at Troigros, L’auberge du Pont de Collognes – Paul Bocuse, and others. He even worked in Bangkok, so he liked to make use of interesting ingredients like herbs, soy sauce and nam pla (fish sauce).

Then, for one year, I had compulsory military service, so I was stationed on a navy boat in New Caledonia and cooked meals there. We went to places like Fiji, Tonga, and more. It was hard work, but it proved to be very interesting.

For instance, I learned about preparing Tahitian style fish. It is tuna fish that is cut raw mixed with coconut milk, lime juice and carrots, somewhat like ceviche. I also got exposure to ancestral technics such as digging a hole in the ground by the seaside, lining it with banana leaves, stoking a fire, and then using heated stones as a cooking surface for fish or meat. There were also interesting flavors: yam, taro, manioc… vegetables we don’t have in mainland France. In addition to learning these fascinating techniques, we went to see where vegetables, bananas, vanilla beans, and pineapples were grown and harvested.

I then stayed for some time in Indonesia, touring various places. I also went to Japan and New Zealand. Of course, I tasted my way through these countries.

I then worked with Alain Passard for five years at Arpège. This was from 1993 to 1998. Then I spent two years in Australia, chef at a restaurant in Sydney. In 2000, I opened Astrance with Christophe.

If you look at my background, I think it should be clear – my career-path has been culinary school, London, New Caledonia, a renowned restaurant, Australia, then Astrance. Given that background, I enjoy drawing on the cuisine of various countries. Therefore, I have no hesitation about using items like vanilla, coffee, coconut, mango, dashi, because they are part of my journey, of my life. 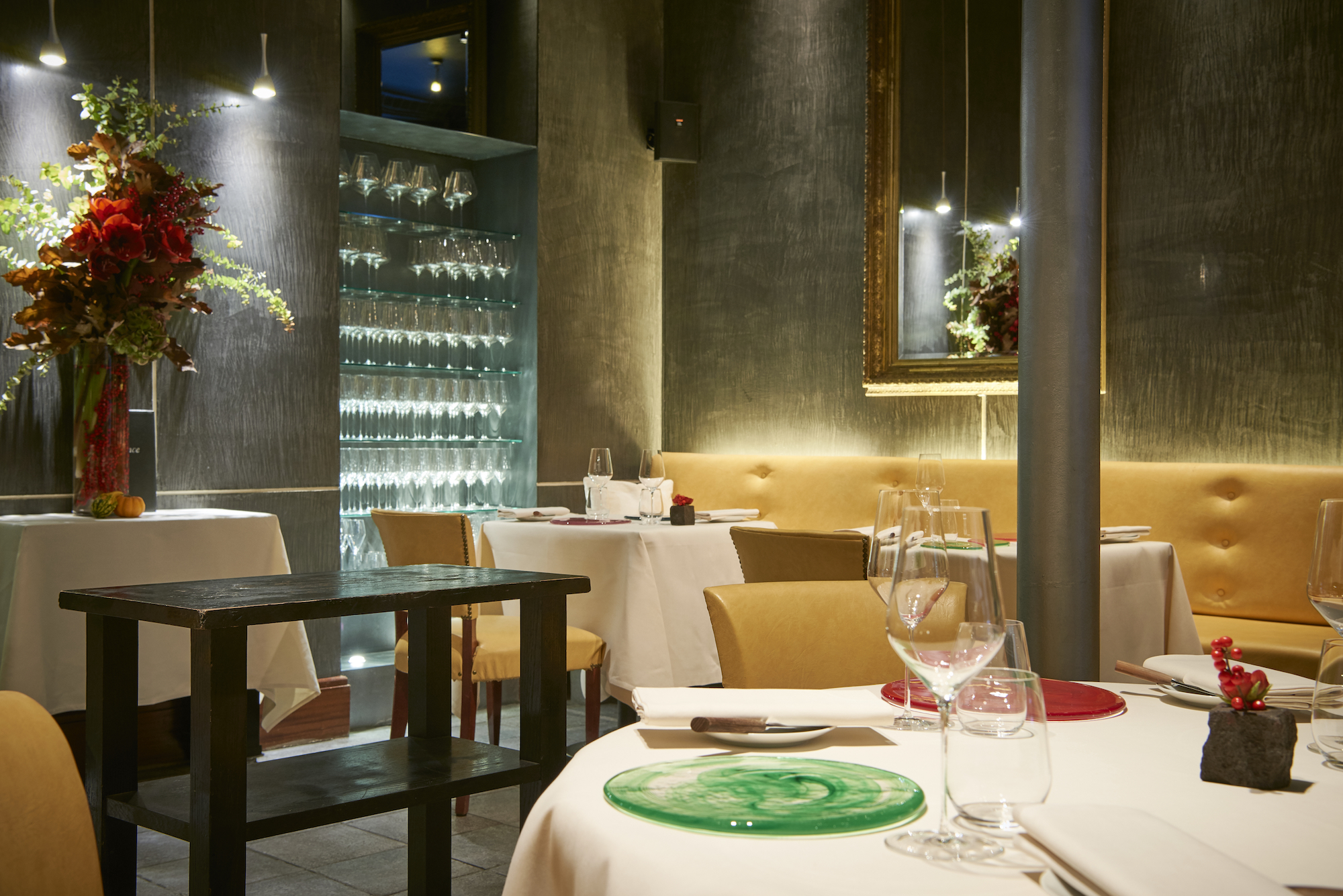