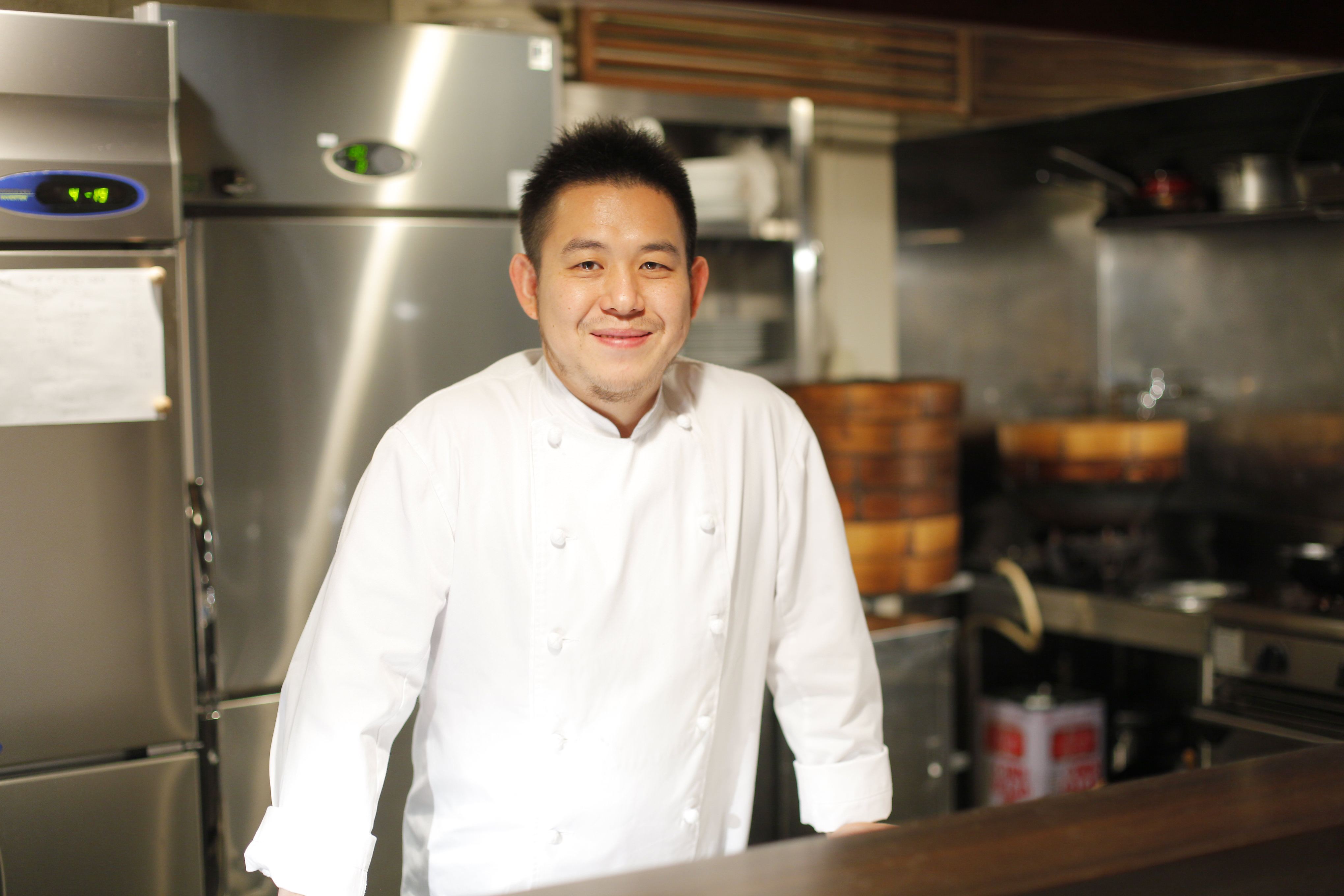 Upon obtaining 2 Michelin stars at the "Maison d'Umemoto, Shang-hai" and gaining attention as the young leader of Chinese cuisine, Mr. Umemoto suddenly closed his restaurant to travel around the world. Upon returning to Japan 2 years later, he opened "Shao Shon Hanten" in Kitasando, Tokyo. The owner, Mr. Umemoto, continues to impress food experts with his Shang-hai food from the French occupation era, utilizing plenty of carefully selected ingredients that is served inside his small "hidden space" restaurant in the basement floor of a building, without even a sign outside. What did this chef think about as he paved his own path, and what type of culinary life has he lead thus far? 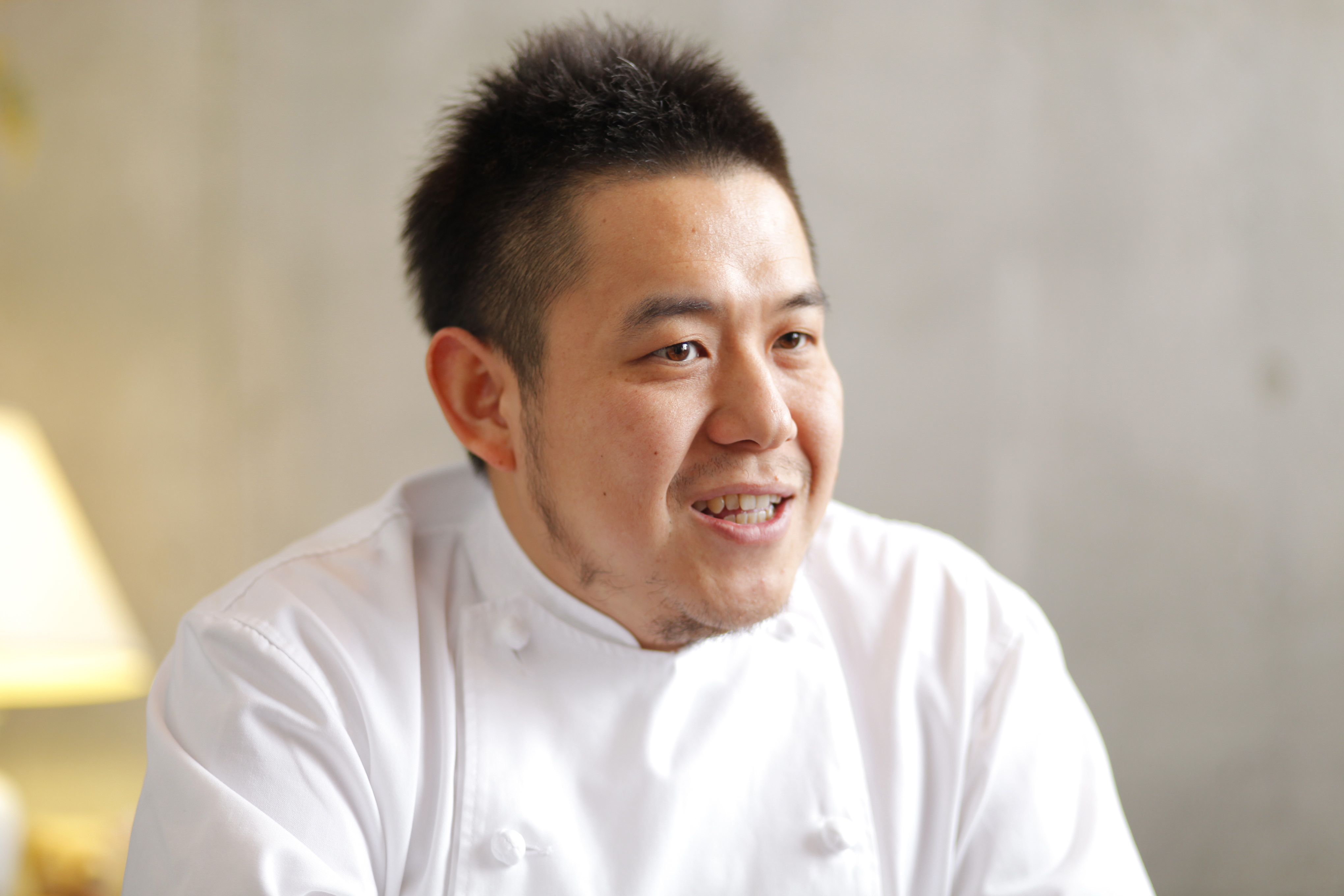 Falling in love with the flavors of a master, leading to a dramatic switch from Japanese food to Chinese food

Mr. Umemoto:
Ever since I was little, I loved to cook and eat food. When I was in pre-school, I was looking at my mother’s book of recipes and already making dishes. By early elementary school, I knew that I was going to become a chef. That dream never changed since I was very young.

You started your career as a chef in Japanese food, and switched to Chinese midway. When did this transition occur, and what made you to become Chinese cruise chef?

Mr. Umemoto:
I majored in Japanese food in the Machida Culinary Art School, and after I graduated, I trained as a Japanese food chef from age 19 to 21 in “Tannou,” which held its main restaurant in Kyoto. Since that time, I was regularly visiting popular restaurants and dining there, but the Chinese food I ate at one particular restaurant really shocked and exciting. It was Chinese food which is close to Japanese food… but it was a flavor I never experienced, something I wouldn’t have imagined in my world of Japanese food. It was very light and delicious. I was moved by how they pulled out the natural flavors of the ingredients, and how they used oil and vinegar.

Because my experience was so exciting, I taught that I wanted to work there on the very first day I ate there, and I talked the chef directly.

What a fate! Even then, did not you hesitate in making such a dramatic change in your career path?

Mr. Umemoto:
I did not hesitate at all. Actually, by the time I was 19 I had a goal to “Be on my own and have my own restaurant by the age of 25.” I knew that it wouldn’t be interesting for me in the culinary world unless I challenged it with my own strength. The reason I specified “25” was because I thought I wouldn’t be able to take big risks if I got older. I was just thinking, I want to start experiencing lots of things as early as possible!

Even if you continued training at “Tannou,” it would take you a long time, about 10, 20 years to be independent. By jumping into a new world and working as an apprentice for a Chinese food chef whose skills you fell in love with, you had a strong desire to make your dream come true. 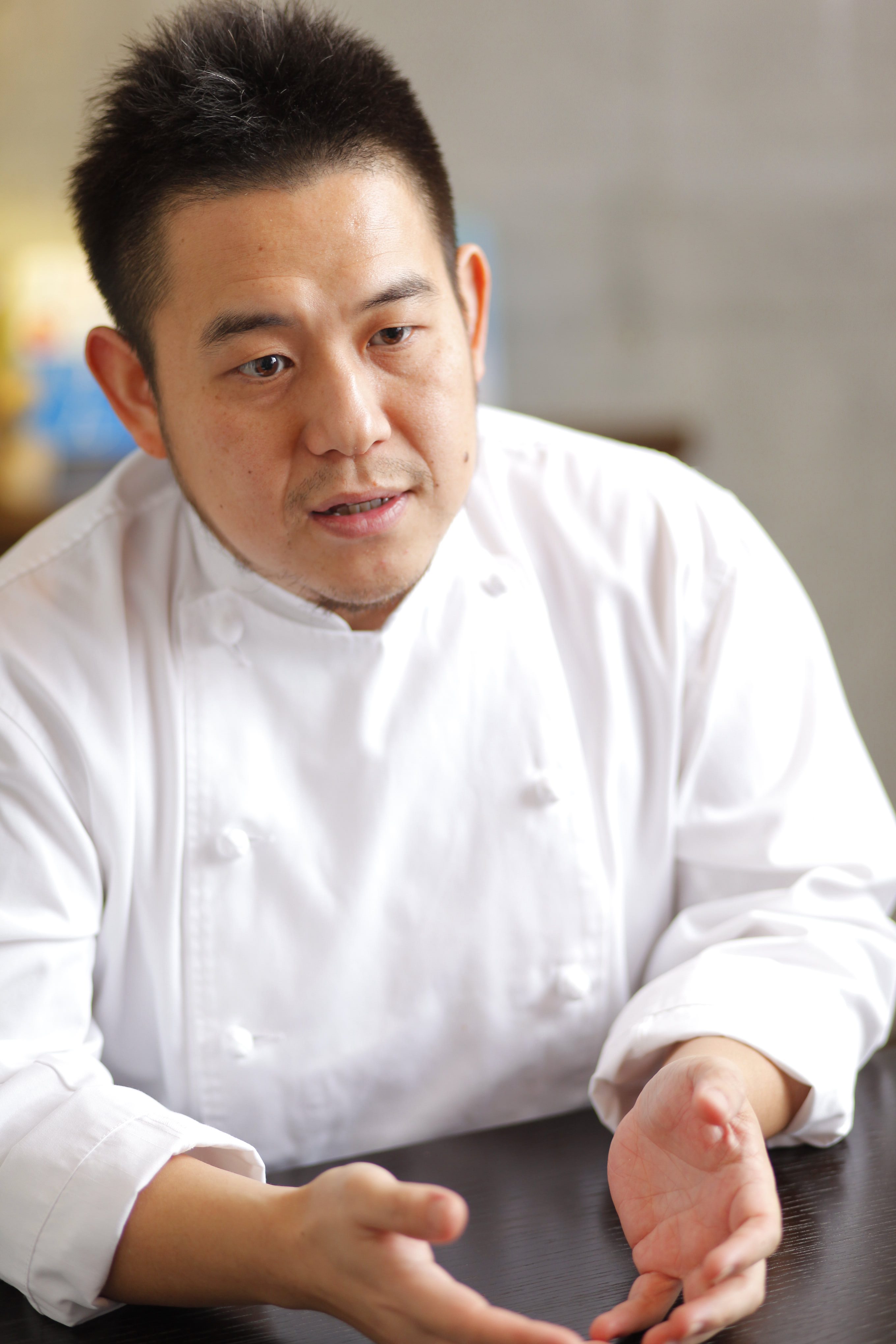 Three and a half years of one-on-one training, when everything about Chinese food was taught

Later, at the age of 24, you open your own restaurant, but is this Chinese restaurant the only one you trained at?

Mr. Umemoto:
For me, my only master of Chinese food is Chef Wang who created that moving flavor. I cannot mention the name of the restaurant since the restaurant refuses media coverage, but I trained for three and a half years at another Chinese restaurant in Tokyo. Then, I left the restaurant to open my own.

What the master was like, Chef Wang, who opened your eyes to Chinese food?

Mr. Umemoto:
Mr. Wang was a very rich Chinese man who grew up in Shang-hai French Concession. I asked to be his apprentice because I was moved by his cooking. The impression I had from the taste of the food and the character of the chef himself were very much linked. Although people who first meet him think he is a little intimidating, once you are a part of his inner circle he is extremely warm person. He was also very frank, and talked about horse racing as well. He also talked about his philosophy on life. Though, unfortunately, he has passed away…

He was not kind to me from the start. That’s why I worked very hard to be loved. For example, I would ask Madame what sort of things Chef liked, and buy gifts for him, or I would bring in some food or snacks that he might enjoy. By continuing small things like that, I think he gradually felt that he could teach me how to cook.

So, at first, he didn’t even teach me cooking. In the beginning he just said, “come if you want to.” When I went to the restaurant, he was like, “oh, you’re here.” We were all testing each other for a little bit. First I started by dish washing, then he let me hold the knife, and gradually started letting me try harder things. About a month after I started working there, I think we finally had a relationship built on trust.

It seemed like you received some intense one-on-one instruction. Was training hard?

Mr. Umemoto:
Once you start working as a restaurant, you have a time period where you do the “grunt work,” but there was none of that for me. When I started working there, Mr. Wang was already in his 70s. Even more, the staff was only 2 people, Mr. Wang and me lol. Right before I started working, one staff member that used to work there had just quit, so I ended up replacing that person.

Each customer would spend about 10,000 yen at the restaurant. It was an à la carte restaurant. We would start preparations in noon, and would be open until 11 or 12 at night, so very late. But since I had a clear vision of my dream, it wasn’t bad for me. Although I did not have any experiences in Chinese food, I was treated as an asset to the restaurant. So it was very hard… But because of that, I was taught everything step by step, even the small details. Mr. Wang and me was together day and night.

Mr. Umemoto:
The most useful thing that I learned from training in Japanese food is the basics of handling fish. Japanese food handle fish more delicately than Chinese food. The basics that were taught at “Tannou” still continues to be useful.

In Chinese food, it’s hard even to do stir fry, but high quality ingredients like shark fins is only cooked by the top chef. It took me a very long until I could handle those ingredients. I can only practice with dried food like shark fins and sea cucumber at the restaurant, and I can never mess up. I had Mr. Wang check my progress many times while I was cooking. I learned everything from Mr. Wang, from how to tell good ingredients apart, or how to obtain the ingredients.

So you learned everything from Chef Wang, starting from the basics of Chinese food. Are there any teachings or philosophies that still influence you today?

Mr. Umemoto:
The most helpful thing was that Mr. Wang had a philosophy of, “Learn by eating the food before thinking about the technique.” I think this was very good for me.

And it goes without saying that the food Mr. Wang made for the employees was wonderful. He would make us 5 dishes a day for us to eat. In the three and a half years I trained there, everyday he would cook for us. Sometimes, the dishes were better than the menu on the restaurant lol. He used very carefully selected ingredients we wouldn’t serve to the customers.

My favorite menu he made for us… Hmm, that’s hard. I can’t choose lol. He was very good at making non-Chinese food too. He could also make pasta and paella, and those were delicious as well. 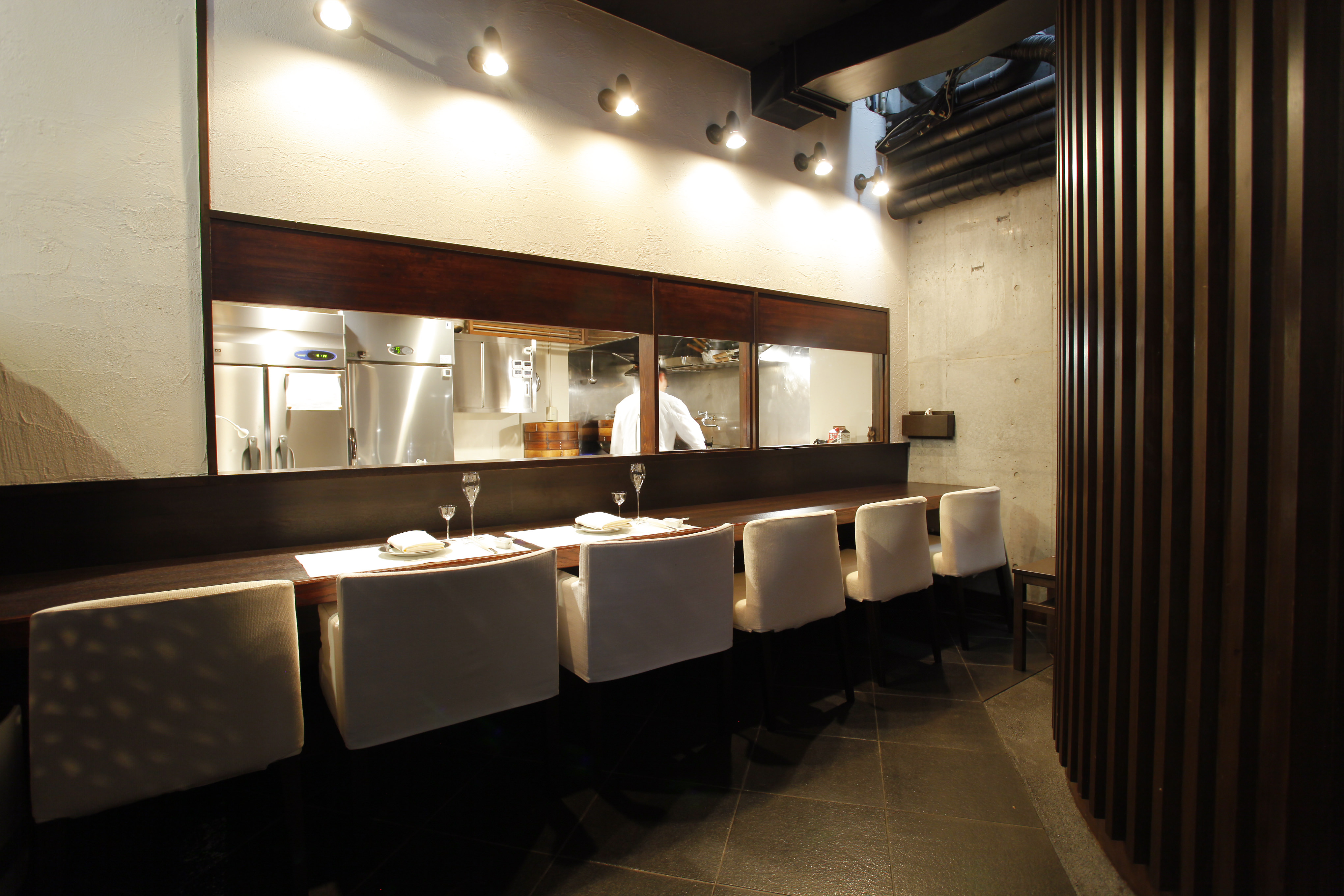