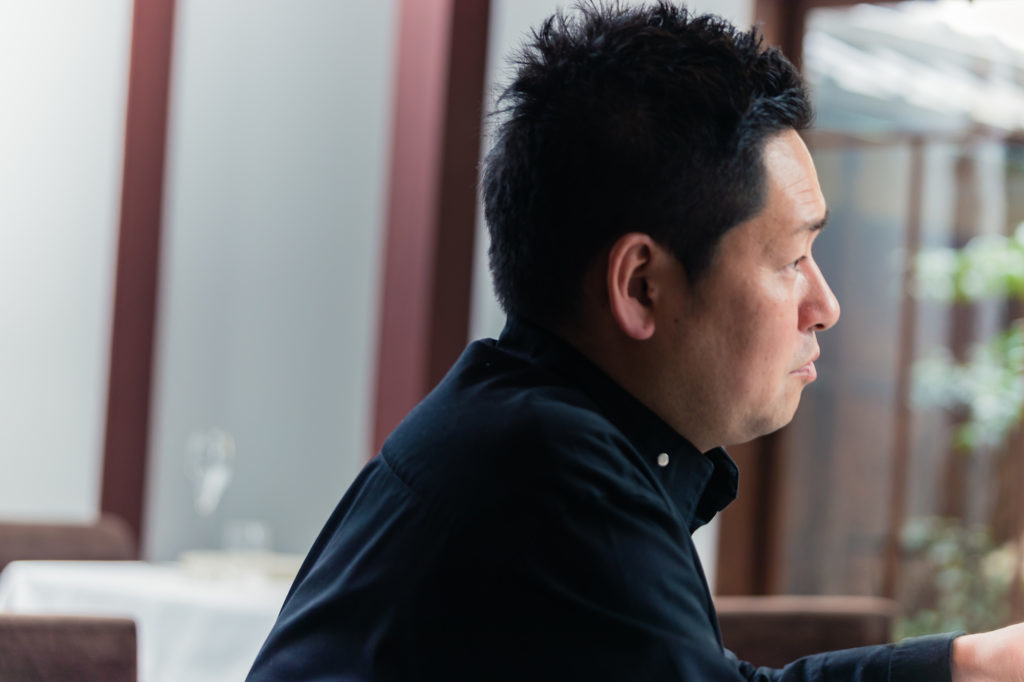 You then went to France at the age of 29. That’s the time you started walking the path of French cuisine you aimed for from the beginning.

Mr. Maeda:
I had the opportunity to get a job at a French restaurant in Japan, but I decided to go to France first; I thought that if I stayed in Japan, I would not be able to change direction easily if I eventually wanted to study in France. I was 28. I started getting information and found out that when applying for the working holiday visa, the age limit was 30 years; so I consulted the chef about my circumstances. I told him that I wanted to go to France in a year, and then started attending a French language school. On my days off, I worked part-time and saved money, and on my working day, I asked the chef to let me experience actual French cooking duty when I started work in the early morning. I spent a year preparing for France. A French chef I met at that time introduced me a restaurant where I could do my apprenticeship.

So, the restaurant search went smooth.

Mr. Maeda:
Yes. The ratio of visas was high at that time but I was able to pass the paper examination easily. However, once I arrived, I was not able to make myself understood at all. After only about a year of study, it was not possible to communicate in French at all. I did not work in the French cuisine industry, so I didn’t even understand the meaning of simple terms. Cooking procedures were also completely different. “I wish it was a Chinese pot;” “I wish it was a Chinese knife.” I thought like that often. The first couple of months were really troublesome. I could not even take orders, so I studied French every day after I went home. I was acutely aware that it was reckless.

However, I got used to my new life in the third month, and I started enjoying and remembering that I actually wanted to do this by experiencing the French cuisine world I dreamed of. Then in France, I went around some starred restaurants in Bourgogne and Franche-Comté. In restaurants that specialize in gibier cuisine, chefs can go hunting by themselves, so I also studied methods for cleaning and cooking the ingredients and gained valuable experience.

After experiencing the authentic French cuisine world for one year, you returned to Japan. What steps did you take after that?

Mr. Maeda:
I got an invitation from the chef of a two-star restaurant saying, “I will start a new restaurant; would you like to work with me?” However, I had to decline the offer because of visa issues… After returning to Japan, I worked for a year at the French restaurant in Hotel Okura in Kyoto, and returned to Rihga Royal in Kyoto where I used to work as the chef’s assistant… When I was wondering what to do in the future, the chef of a three-star auberge French restaurant, Michel Bras, opened a restaurant in Osaka so I went there to eat. I was impressed very much by the dishes and asked the chef to work. It was the restaurant HAJIME, which had been open for about two months. 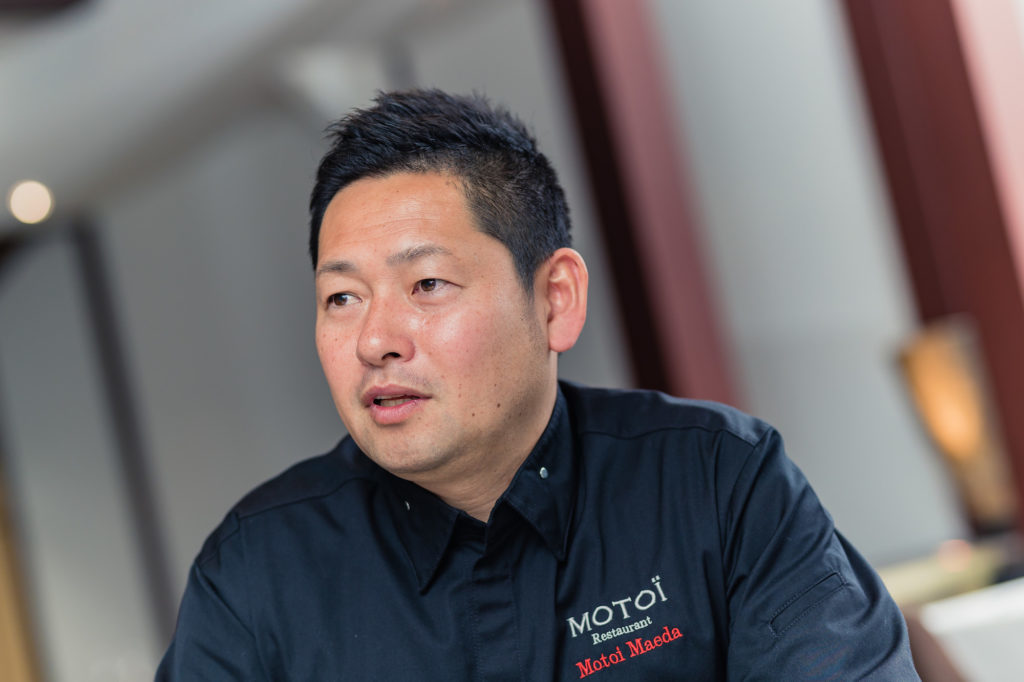 It is a famous restaurant in Osaka that returned to three-star status in 2018. There must be a lot of things you learned from Mr. Hajime Yoneda, the owner-chef.

Mr. Maeda:
acquired different heating techniques from authentic French cuisine and it was a fresh idea for me. I joined the restaurant when it was only around two months old, so they were at the stage of consolidating the taste of their cooking. It was fun to give various ideas.

I have acquired ideas as much as I’ve acquired skills. For example, a single plating is always well calculated and everything is “meaningful work.” I am thoroughly striving to do work that can provide an answer when asked, “Why did you do like that?” It’s OK to make mistakes, but answers like “It just happened” or “I didn’t think about the meaning” will keep you from growing. When I am required to have my work done with quality and speed, I think about having them done as fast as possible. So, I also try to listen carefully to the current staff when they want to hear details and ask, “Why did you put this on the right?” or “What was the reason?”

Although it tends to be neglected because it is not a big deal, if you see only one thing you must pursue it in detail to do professional work. That accumulation will create a difference in everything. In addition, to the manager’s perspective, Mr. Hajime is very strict about using plastic wrap. He even cares about cutting it perfectly with a small knife and is always thinking of cost. I have worked only in hotels and in France until now, so I felt the severity of an independent restaurant.

There was also lots to learn about management concepts.

Mr. Maeda:
Because I had the desire to own my own restaurant, I actively tried to absorb information about creating a shop and about management. At that time, a study group was held on our days off, and the staff would take turns presenting about what kind of store we would create and where we’d open them. It was like role-playing to think about how you would persuade financial institutions when borrowing funds to start your business. After business hours, I gathered materials, even during the middle of the night… The others pointed out insufficient viewpoints and thought about how to craft a store and its services. Without Mr. Hajime’s teaching, I wouldn’t have been able to open this restaurant.

Then in January 2012, MOTOI was opened. Did you have difficulty attracting customers?

Mr. Maeda:
Only my parents came on the first day, but I think that the influence of HAJIME was also great so it was going well I think. Word-of-mouth had an effect, too, and it was great that I earned a Michelin star in the early stages. While at HAJIME, I was somehow able to grasp the method to get stars, so I was placed in the guidebook the very year that I opened. Those days in Kyoto, the Michelin guide also dominated Japanese cuisine and there was no French in there.

Even when I worked for HAJIME, some customers staying in Kyoto came there saying, “There are so few French restaurants in Kyoto.” Under such circumstances, there was also a desire inside myself to change the impression that Kyoto’s gastronomy was comprisedsolely of Japanese cuisine.

I also thought that it was possible to compete in the area because there were only a few modern French restaurants. When MOTOI was published for the first time in the Michelin Guide, it was the only French restaurant listed, so it was inevitably attracting attention. I was lucky to have good timing. 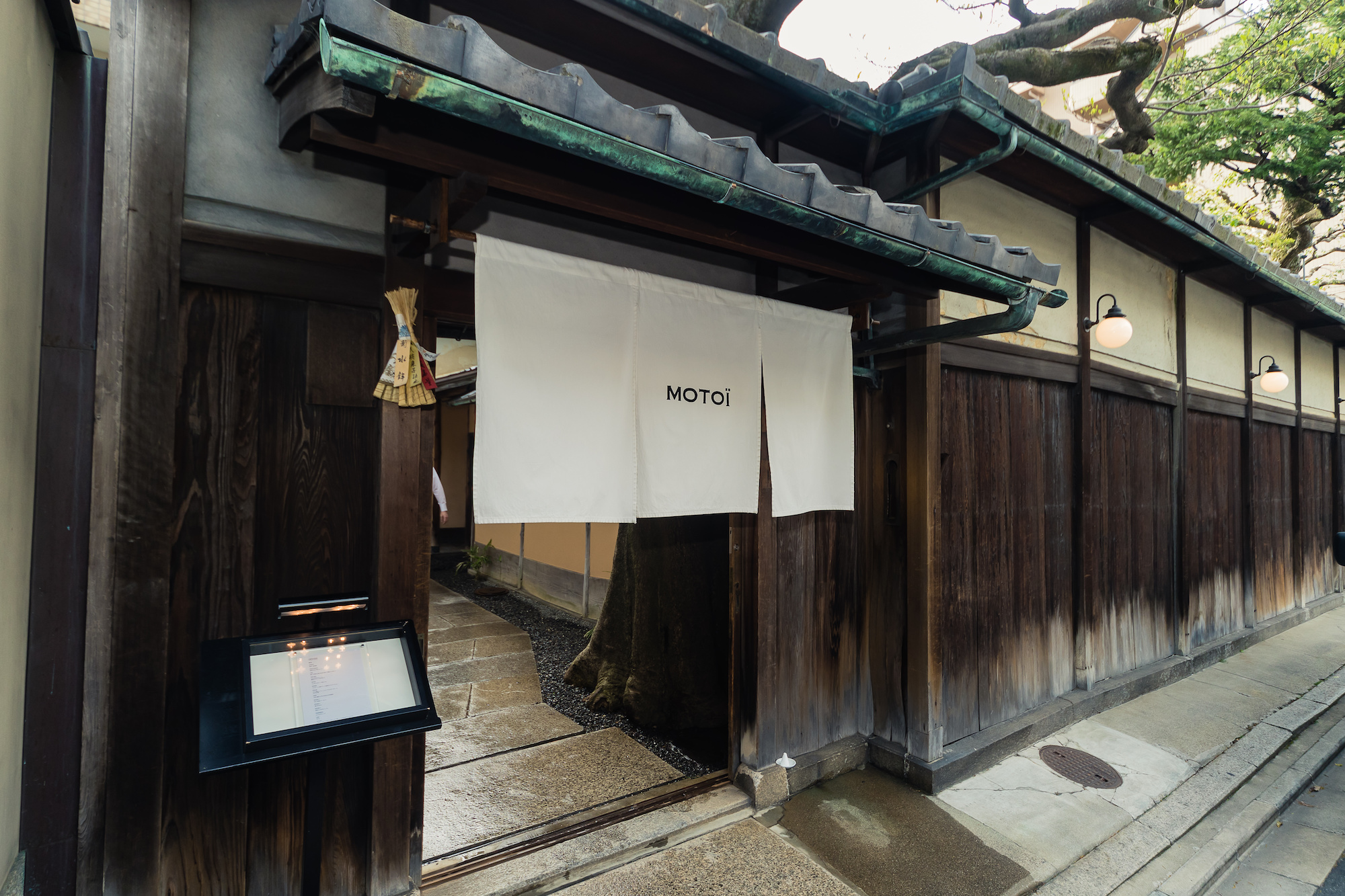