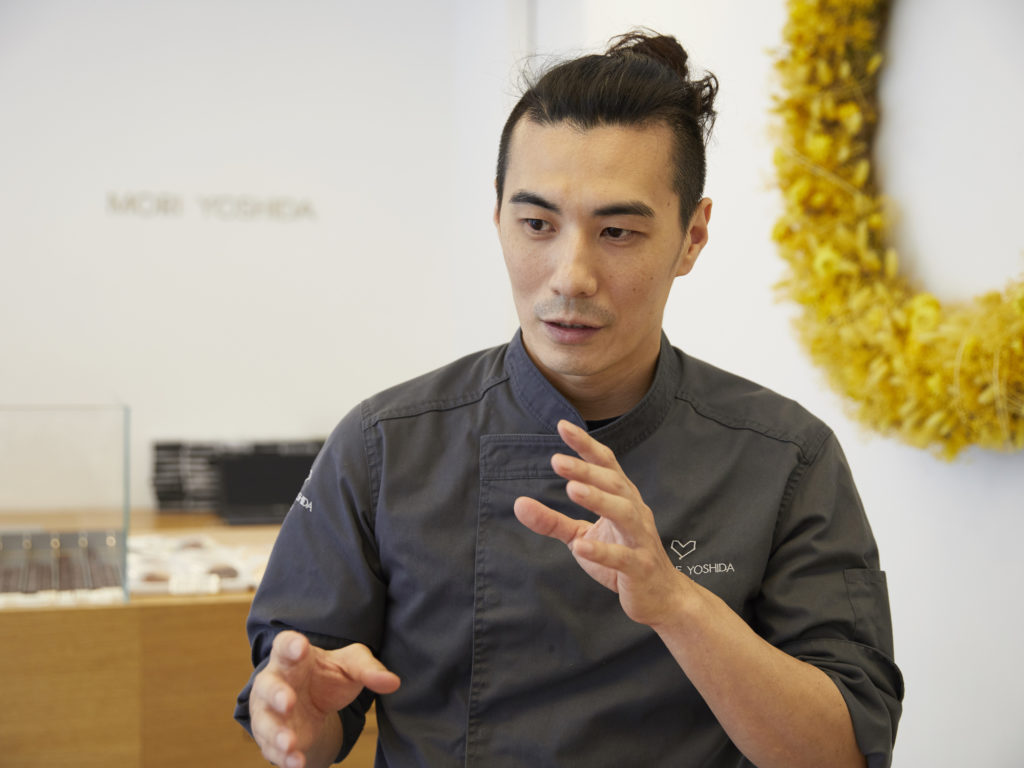 Concretely, why did you decide to open up a restaurant in France?

Yoshida:
I thought that in order to create French pastries as a French patissier, I needed to thoroughly understand the basics. After all, French pastries are based on French culture, its history, as well as its religious backgrounds.

When I first went to France, French pastries did not fascinate me but at that time some French desserts which I thought were delicious and interesting were slowly coming out. Besides that, when I visited the marchés, I saw many great ingredients and thought to myself that I wanted to make sweets with those ingredients.

There were only a few patisseries with desserts which I thought were really delicious, so I thought it would be good to start something there. That’s one of the reasons as well.

You opened MORI YOSHIDA in 2013. What sort of difficulties did you face in opening a patisserie in France?

For example, I was told that renovations would take three months but it ultimately took eight months. During that period, there were many problems which incurred additional fees and it was a really tough time for me. But in France, apparently being able to finish within a year after being told three months is already considered good, so…

On the other hand, I had nothing in particular to do in those eight months so I was able to think carefully about the menu and explore other restaurants and patisseries, so it was an important time for me, too.

The high price of getting the right to do business in France was an obstacle.

Yoshida:
I already had my own restaurant in Japan, so I used my own money to open the restaurant. I used the capital from my Japanese company to open a company in France. Many problems can arise when opening a restaurant and there was a choice to get a local person onboard. However, I wanted to do whatever it took to avoid losing my own personal touch so I did everything on my own. I thought that if I didn’t do so, there would be no meaning in taking the trouble to open my own place in Paris. 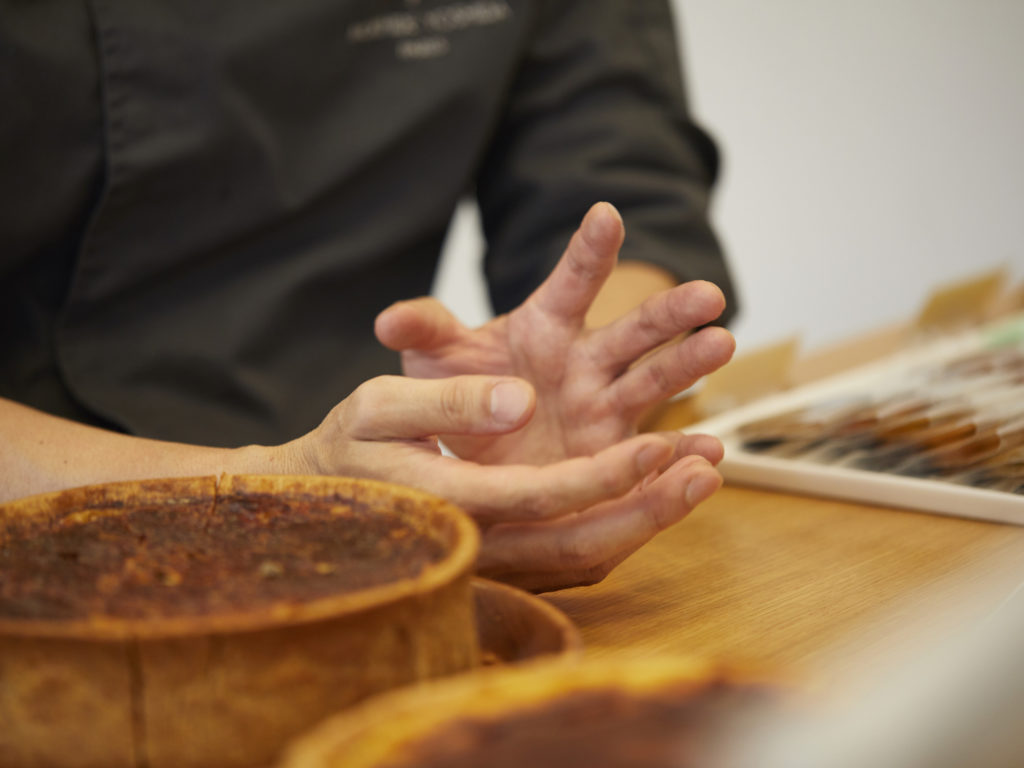 Japan, a country which has wonderful food but in reality, does not respect it.

By the way, who were you running the restaurant with?

Yoshida:
We were a team of four patissiers, four cashiers, among which one was a trainee from China. There were some turnovers but generally I employed mostly Asians.

Were there many people looking to work at your restaurant?

Yoshida:
It depends. Sometimes I get contacted by people I know in Japan, saying, “There’s this person who works for me but will go to France,” and want me to help them out. In addition, depending on the time, I occasionally put up advertisements on recruitment sites catered to Japanese people living in France.

How did you select your employees?

Yoshida:
I looked for people who had either language skills or technique. Because, this may sound bad, but there are many people who think that their sweets will magically turn delicious just by inhaling the air in France. I think people who think like this will not grow much. It’s like they are trying to join the Major League without any expertise…

In my opinion, instead of people with longing and dreams, it is the people who are serious about improving their career and skills who will ultimately succeed in the long run. 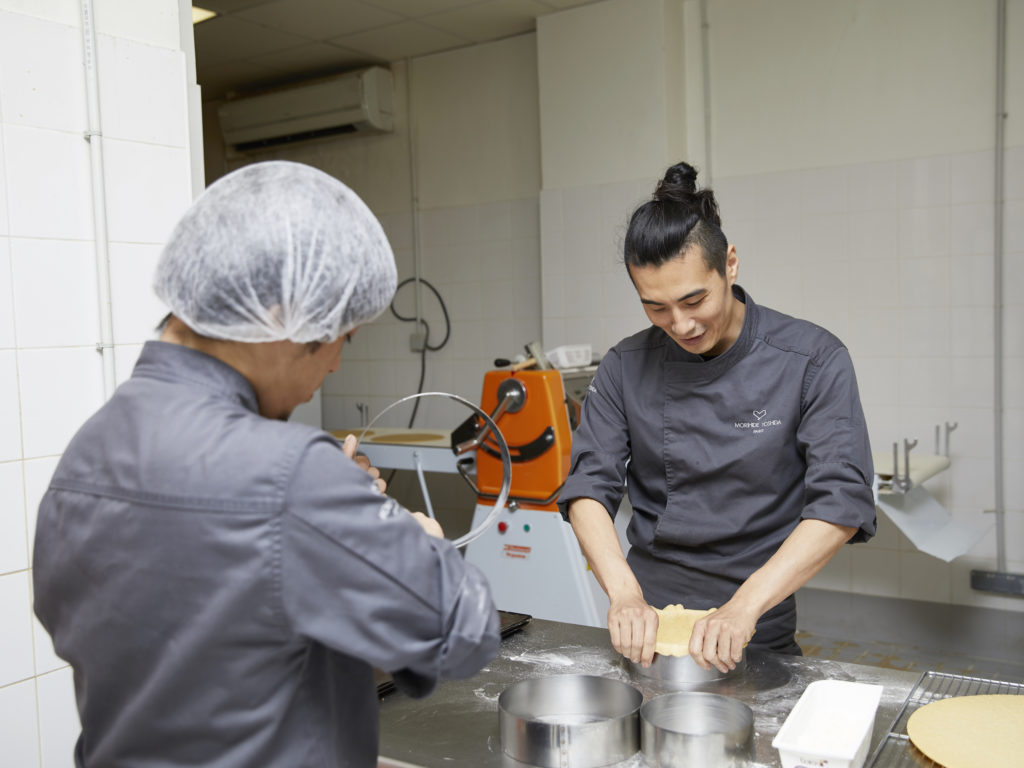 Do you think, then, that the younger generation should not just simply go overseas?

Yoshida:
Of course, if you are already equipped with the technical or language skills, then you should definitely go out. Because unfortunately, pastry chefs are not considered a commendable career in Japanese society. This also applies to all professionals who make food, including chefs.

Are these careers which are commended overseas, including in France?

Yoshida:
Yes. Firstly, in reality, the money you get is very different. For example, I do demonstrations and workshops in various countries including Japan, Moscow, Israel, etc. but the amount of money I get offered in Japan can be half of what I can get in other countries.

In a country such as Japan where our food culture is so wonderful, why don’t we respect the people who create food? It seems like people in suits and drawing up plans gain more respect. But I think that there needs to be a balance between these two for it to work well.

In France, on the other hand, people think it is natural to pay money for coming up with ideas and doing creative things. This is why chefs and patissiers can attain the status similar to those of medical doctors.

Whereas in Japan, people go, “What? Why is it so expensive when the cost price is so cheap?” and there isn’t a culture of paying for creativity.

What do you think of the career of starting a restaurant in France as a Japanese patissier?

Yoshida:
Frankly, it depends on the person and I still don’t know what I can tell you. I think climbing the ladder within Japan and starting a patisserie in Japan is also a straightforward and good career.

But when I had my own restaurant in Japan, maybe it was because it was in Shizuoka, but for some reason, I felt that I wasn’t doing what I chose to do on my own volition. But somehow, starting a restaurant in Tokyo as a person from Shizuoka also didn’t seem interesting. Which is why I came to France.

Even so, was this the right thing to do? I wouldn’t be able to tell you the answer until 10 or 20 years later. So when thinking about a career as a patissier, the important thing isn’t to think about where you want to run your business, but to really think about what you want to be after a few years. If it is clear what you want to be in a few years, you’ll know what to do today and naturally know where you want to train and where to start your patisserie. In my opinion, just making pastries everyday without thinking about all those things is not interesting. 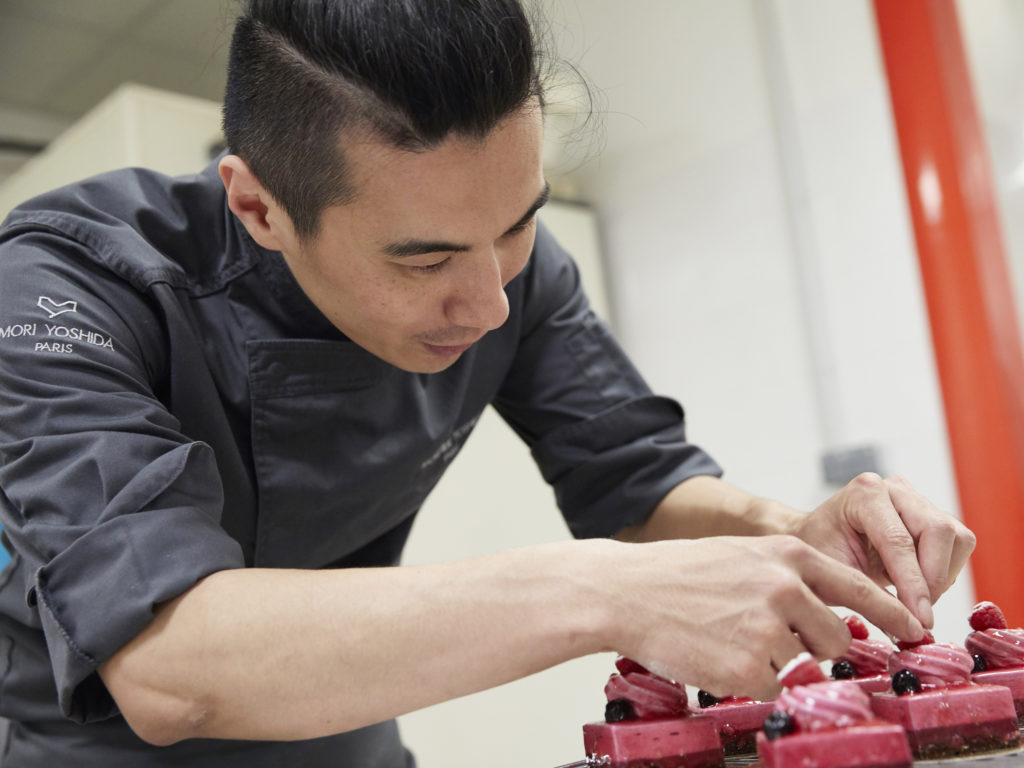 When making French sweets as a Japanese person, it’s important to be conscious of being yourself, and not being “Japanese”

What do you think about the pastry industry in Japan today?

Yoshida:
Well, it’s seemingly quite dynamic but I feel that the top patisseries who are in their fifties have been dominating and continue to dominate the industry within the last ten years.

In France, young patissiers often come up in the media but this is not the case in Japan. This shows the extent of the power the top patissiers have in Japan and this could be seen as fascinating. These patissiers have their own logic and passion so everybody follows them.

What about yourself? What’s your logic and passion?

Yoshida:
I intend to first create a firm foundation in Paris. In doing so, I can get involved with what’s happening in Japan and at the same time, I would like to do things that can fascinate French people with the sweets Japanese patissiers make.

What do you mean by sweets made by Japanese patissiers?

Yoshida:
Often, when people find out I’m Japanese, I get asked why I don’t use matcha or yuzu. But if I use those ingredients, frankly, my sweets would become something that can be made just by anyone. If that’s the case, there’s no reason to be in France, and no reason for MORI YOSHIDA.

That’s why I would like to leverage all the aesthetics and skills I have accumulated so far, such as the tones of sweetness and techniques of making pastries in the sweets that I make.

Of course, I’m a Japanese person born and raised in Japan so when I put myself out there, the “Japan” element would naturally emerge. For example, when the season comes, I often make strawberry shortcakes. Combining the Japanese technique with the base ingredients from France truly embodies the idea of “French sweets made by a Japanese patissier”, and I find that really interesting.

You don’t use any ingredients from Japan.

Yoshida:
I do, actually, occasionally for limited periods of time when there are requests (laughs).

But I generally use only French ingredients as my base ingredients to create French pastries. In the first place, when I opened my patisserie in France, I wanted to use flour, butter, and fruits from France because they were delicious.

Lastly, what would you like to say to the young patissiers out there?

Yoshida:
Let’s see. To be frank, I think if you want to make delicious sweets in the superficial sense, you can achieve that just by training with me for one week. But if you don’t understand the reason behind why the dessert was made that way, its background, or why their ingredients were combined in that certain manner, you would not be able to make great sweets, I think. That’s why I think that although people win competitions, young people who achieve in creating interesting sweets are few and far between. By thinking about why that certain dessert had been made, I hope they would be able to try creating real patisserie. 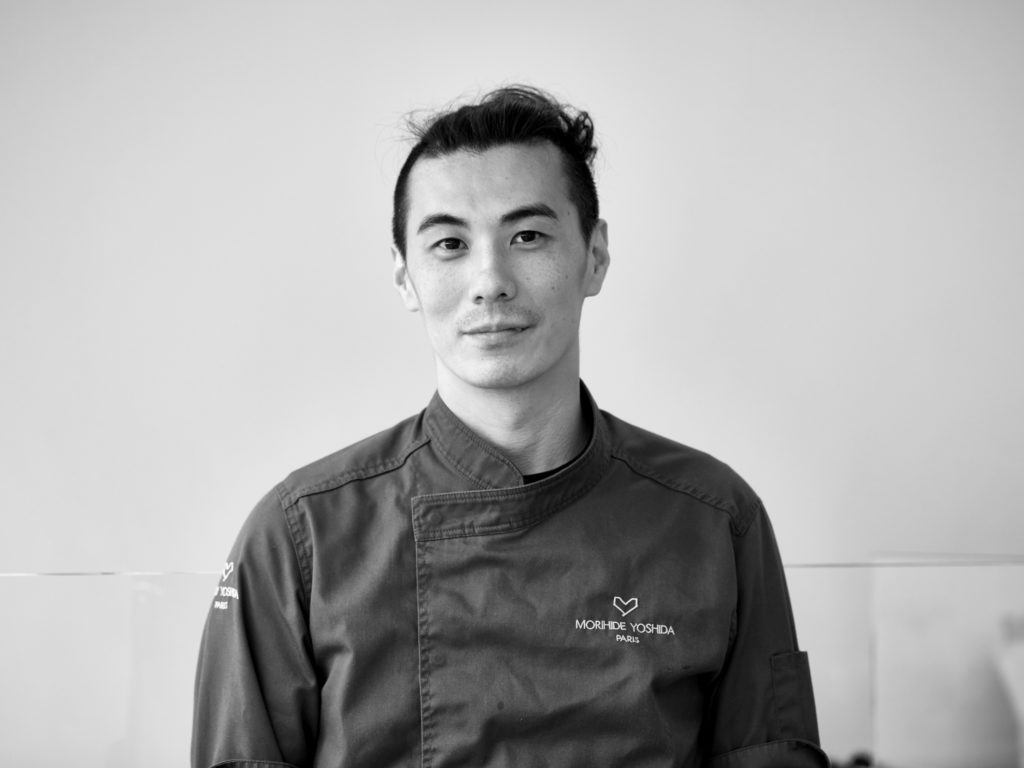 Today, where not only patissiers but many chefs try to differentiate their creations in France by using Japanese ingredients, Yoshida, being a Japanese himself, who deliberately decided to avoid using Japanese ingredients leaves a vivid impression. According to Yoshida, by not only using Japanese ingredients in an amateur manner but using French ingredients as the base of his creations and in discovering what emerges at the end of the creative process, this brings out the uniqueness which is exactly what his Japanese identity represents. This logic that Yoshida expresses passionately will surely convince and fascinate anyone listening.
As a patisserie in Paris, there was a choice to target people coming from outside of France. However, the fact that 90% of his customers are local French people living in the 7th arrondissement in Paris quietly confirms how the pastries at MORI YOSHIDA respects French culture and how they embody their creator’s individuality.
Prev Page
Next Page 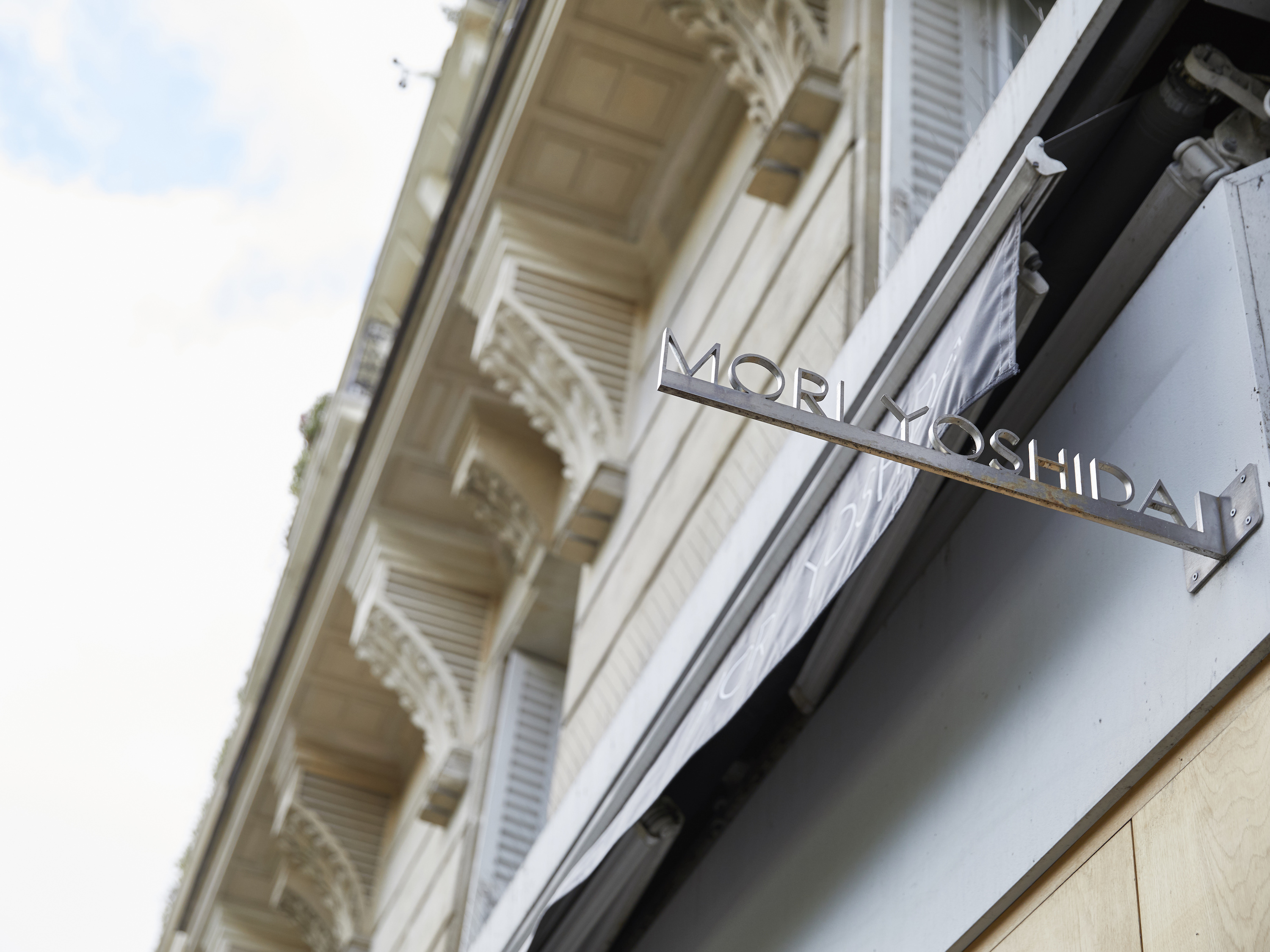