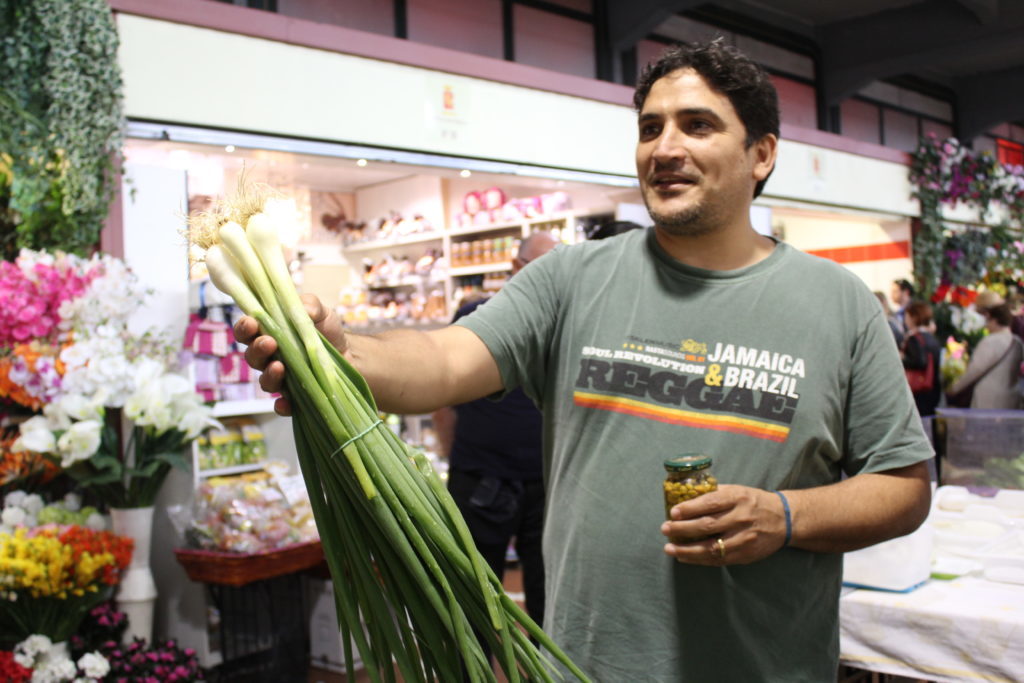 Not recipes but ingredients

Also, your work experience at La Cote d’Or, which earned three Michelin stars, was one of the biggest things for you as a career.

Mr. Colagreco :
I worked there a total of 18 months, but that experience brought me to my next job and gave me the ability to trust myself.

After Bernerd’s death, I sent a CV to  Alain Passard. Luckily, there was an available post there so I started working at Arpege as a vegetable chef de partie. It was when Chef Alain started a vegetable menu so it was a good challenge for me. Chef Alain said to me, “You need to start from zero and forget about what you have learned.”

Was it a very different experience for you?

Mr. Colagreco :
The methods for cooking with vegetables as if they were fish or meat, like baking tem through a salt crust or turning them into gelee, were very innovative and totally different from what I knew.

I also learned the importance of the ingredients rather than recipes. For example, I published a cooking book recently, so I of course wrote recipes for that. However, it is not what we actually use in the restaurant’s kitchen.

Of course, there are some basic seasoning recipes such as vinaigrette sauces, but we use different ingredients everytime we cook. It depends on how we cook, how much heat we use and how long we cook. No two are exactly the same in nature, so you are forced to use commercial, large-scale production in order to maintain the same quality.

It is well known that Alain Passard has his own farm.

Mr. Colagreco :
Yes, I visited his farm and learned the seasons for the ingredients. At the same time, he motivated me to create a new menu. At Arpege, there were not as many staff as there are now; only six chefs in the kitchen. The small number of chefs worked together and cooked from scratch so I was able to have a very meaningful experience. I worked at Arpege until the beginning of 2005 and ended up becoming a head chef after working as a fish and meat chef de partie.

At your restaurant, Mirazur, you serve various seasonal vegetables. Do you think your experiences at Arpege are utilized in your work now?

Mr. Colagreco :
The dishes I serve in Mirazur, such as wrapped beets cooked inside a salt crust, or the caviar sauce, are all based on what I learned from Chef Alain. Two years ago, Chef Alain visited Mirazur. I’ll never forget how he came to the kitchen as soon as he finished eating, then hugged me saying, “You are a master!” I cook big beets and slice them thin, but chef Alain used young, small beets so I cut them into quarters and use balsamic vinegar to taste.

What I serve at Mirazur has a different texture and taste from what was served in Arpege, but the ways of cooking are the same as what I learned from Chef Alain. I basically cook at 170 degrees as chef Alain did, but I take more time to cook beets because I use bigger ones. I use two-year-old beets grown at a partner farm or my own field. Sometimes they grow up to five kg so they take about five hours to cook. 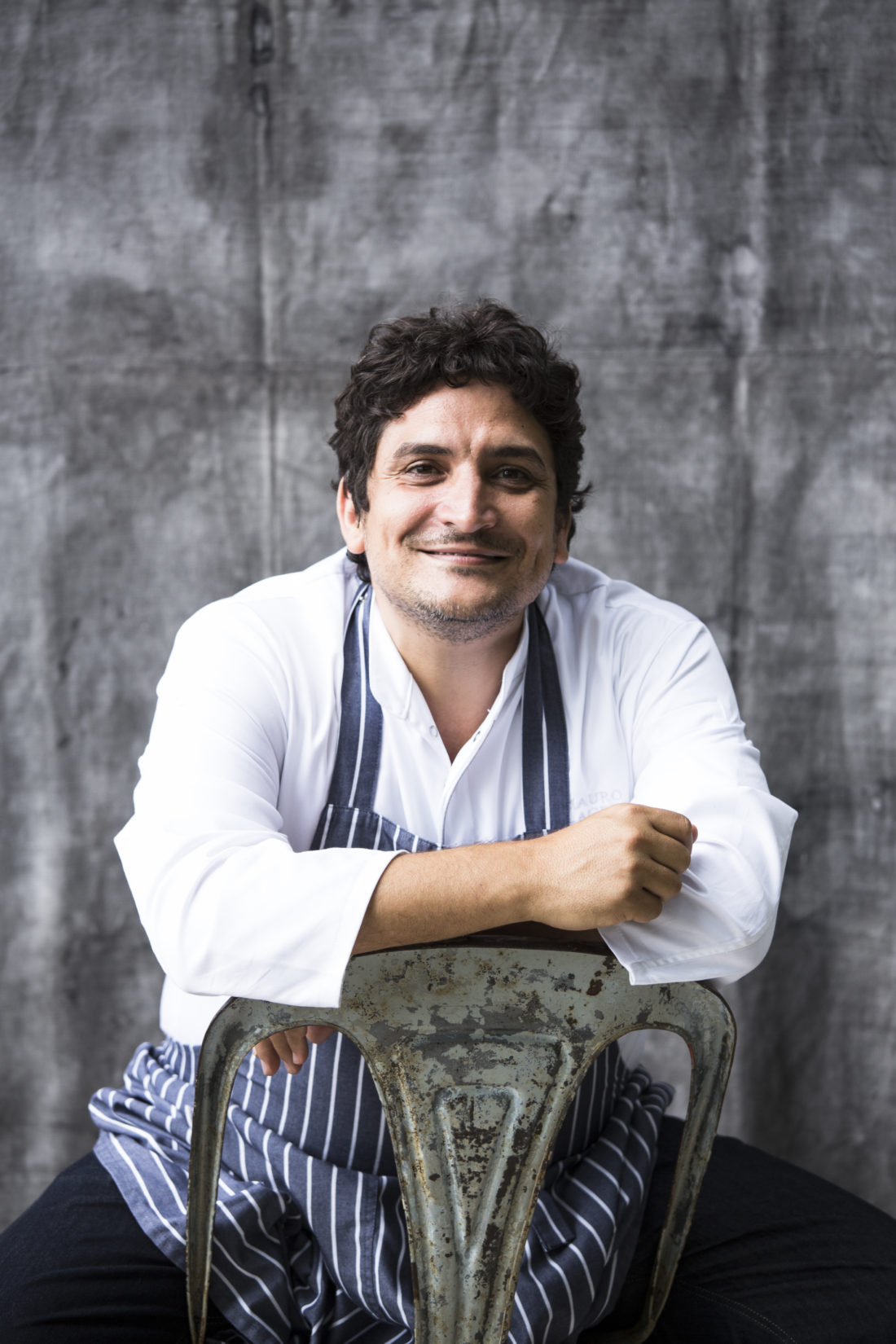 You moved to Alain Ducasse’s restaurant at the Hotel Plaza Athenee.

Mr. Colagreco :
Actually, I was very tired of Paris so I meant to open my own restaurant somewhere away from there. However, I wanted to work in a restaurant ranked in Palaces de France before leaving Paris. I knew Alain Ducasse when I was in Argentina and looked up to him so I wanted to work for him.

I told everything to Chef Ducasse and was allowed to work temporarily. My title was former head chef of Arpege so I started as a garde manger chef de partie without doing an apprenticeship. Of course, the other staff who had done their apprenticeships for five or six years and had waited for a position to become available hated me.

I worked so hard to be accepted by the others. I came first and left last. I worked from six a.m. to two in the morning. I wasn’t supposed to work for a long time but I was exhausted after six months.

Why were you exhausted?

Mr. Colagreco :
There were about 20 staff members in the kitchen and everything needed to be perfect. For example, you could pour sauce anywhere on a plate at Alain Passard’s kitchen but at Alain Ducasse’s kitchen, it had to be poured at the exact right place, as if measured with a ruler.

I didn’t think it was my style. My style is similar to Arpege but I now appreciate that I was able to gain experience in Alain Ducasse’s world too. I was able to learn the importance of perfectionism: if you’re going to make a line, make it perfectly.

Mr. Colagreco :
Yes, I think I grew up eating Mediterranean cuisine as I was of Italian descent, but as a professional chef, he was the first to do it. Of course, even the same Mediterranean cuisine, it was far different from homemade cooking. The cooking techniques for sauces or making soup… At Alain Ducasse’s restaurant, they took so much time and effort just to make soup! 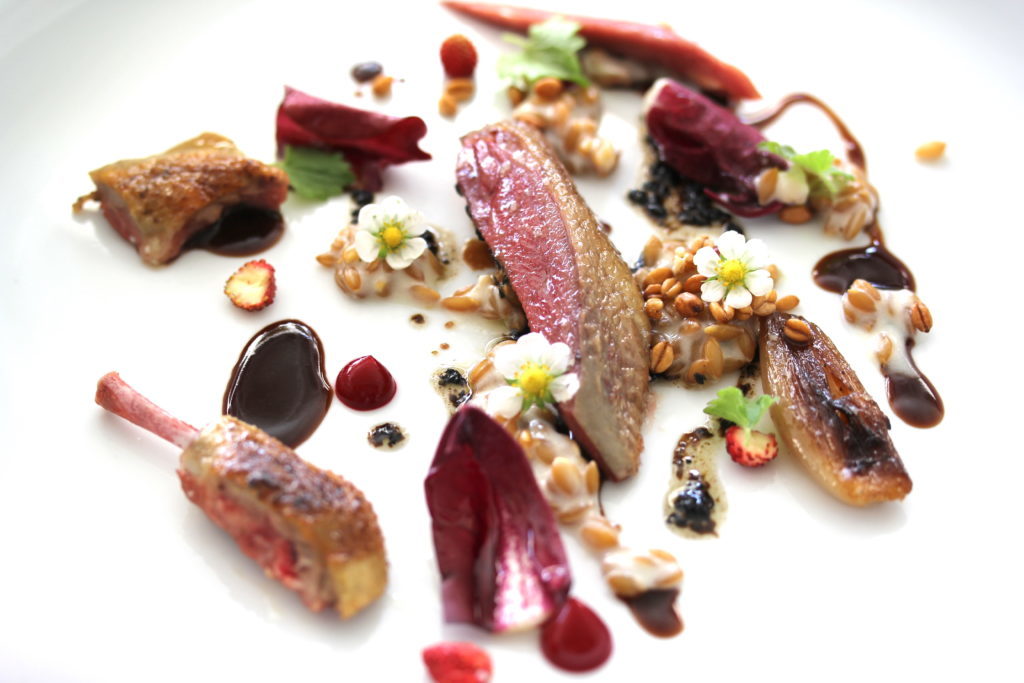 Mirazur is located in close to Monaco, where Alain Ducasse’s restaurant Le Louis XV is located. Was this intentional?

Mr. Colagreco :
In the end I opened it in this area, but I didn’t plan to do so so close to Monaco. I looked all around France but I couldn’t afford to rent a property anywhere as I was only 29 years old and had no business partner. However, the owner of this property was a friend of a friend so he introduced me. As I grew up near the waterfront, this view was excellent and the owner was such a nice person. He lent me this property at a low price for the first couple years as a trial. After that, I started buying things little by little so I own most of the things except the property itself.

So what you serve here is an original style that has the identity of Mediterranean cuisine.

Mr. Colagreco :
Yes. I think Mediterranean cuisine is simultaneously simple and complex. The Mediterranean is a small sea and there are French, Italian, Spanish, North African, Turkish, and Greek cultures mixed up and affecting each other, and it creates a rich food culture.

As for the ingredients, olive oil, vegetables, fish, lamb, and fresh cheese are commonly used. For example, there is the biggest abattoir of France in Nice. Those processed meats are sent to the gourmet capitals, Paris and Lyon, and people in Nice eat honeycomb tripe and what-not. In the restaurants in Nice, many offal dishes are on the menu.

Mediterranean cuisine is a food culture with various facets so it is difficult to define what is truly authentic, but fresh ingredients are used so you don’t really need complex cooking techniques. It is a homemade style of cooking which may be a characteristic of the cuisine. It’s like simply fish, olive oil and vegetables and that’s enough to cook with. Something like that.

Is there anything you learned after you came here?

Mr. Colagreco :
I learned that the most important thing is not technique but the quality of the ingredients and their variety. Especially in Menton,the seasons are divided and they are called micro-seasons. There are new ingredients available every day and I like it very much. It is as though chefs are chasing after those ingredients and we pursue the beauty of nature through cuisine. I don’t mean that techniques are not important, but rather I’m always thinking about how to express the greatness of these fresh ingredients.

I often think chefs are like painters. There is impressionism and cubism… I think my style is similar to Van Gogh. I like his way of expressing nature and its lively strength and brightness. I think it is important to create food in which you can feel energy and passion. Also, I think that Menton is one of the most beautiful places in the world. It is such a beautiful place so the food needs to be beautiful, too. 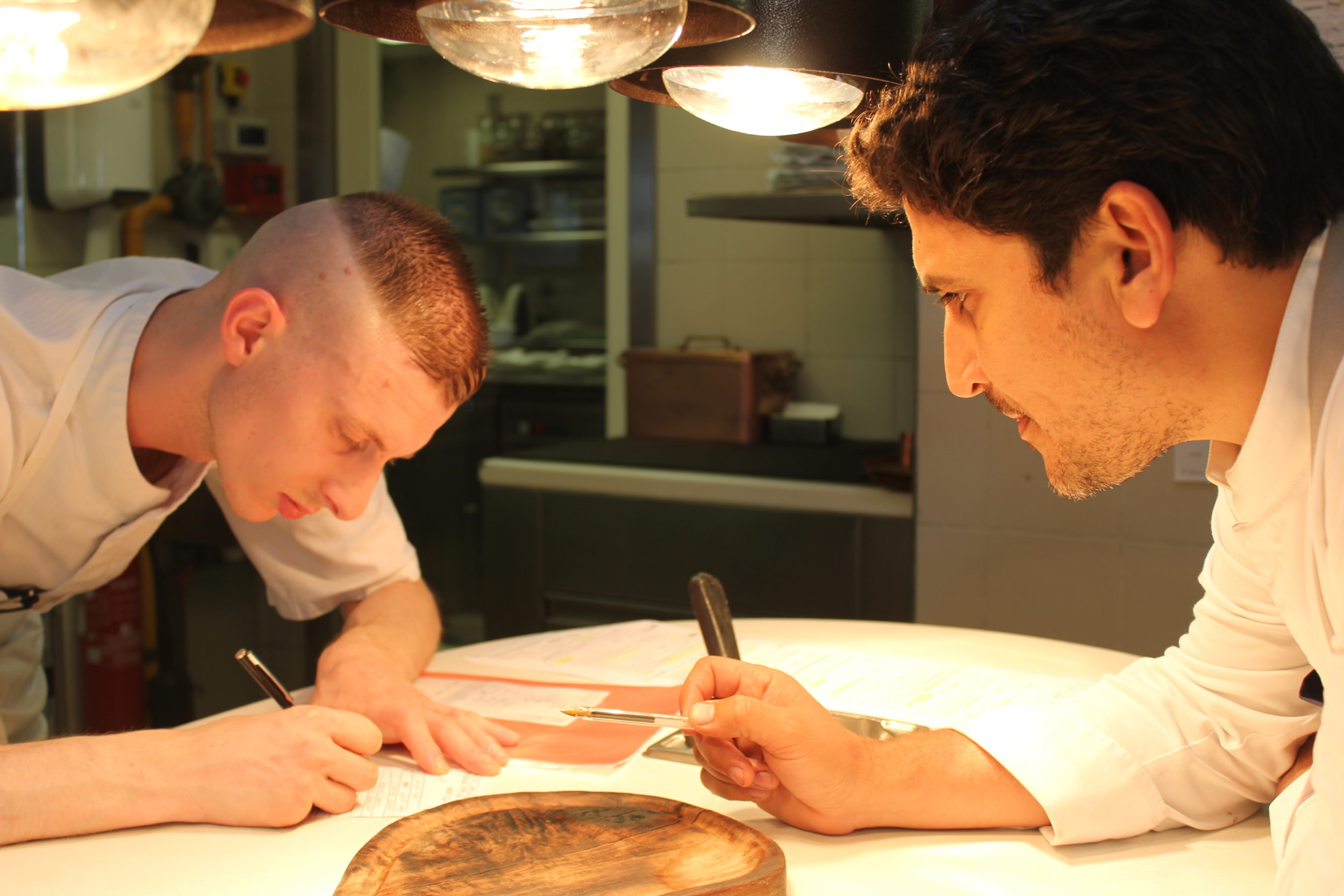