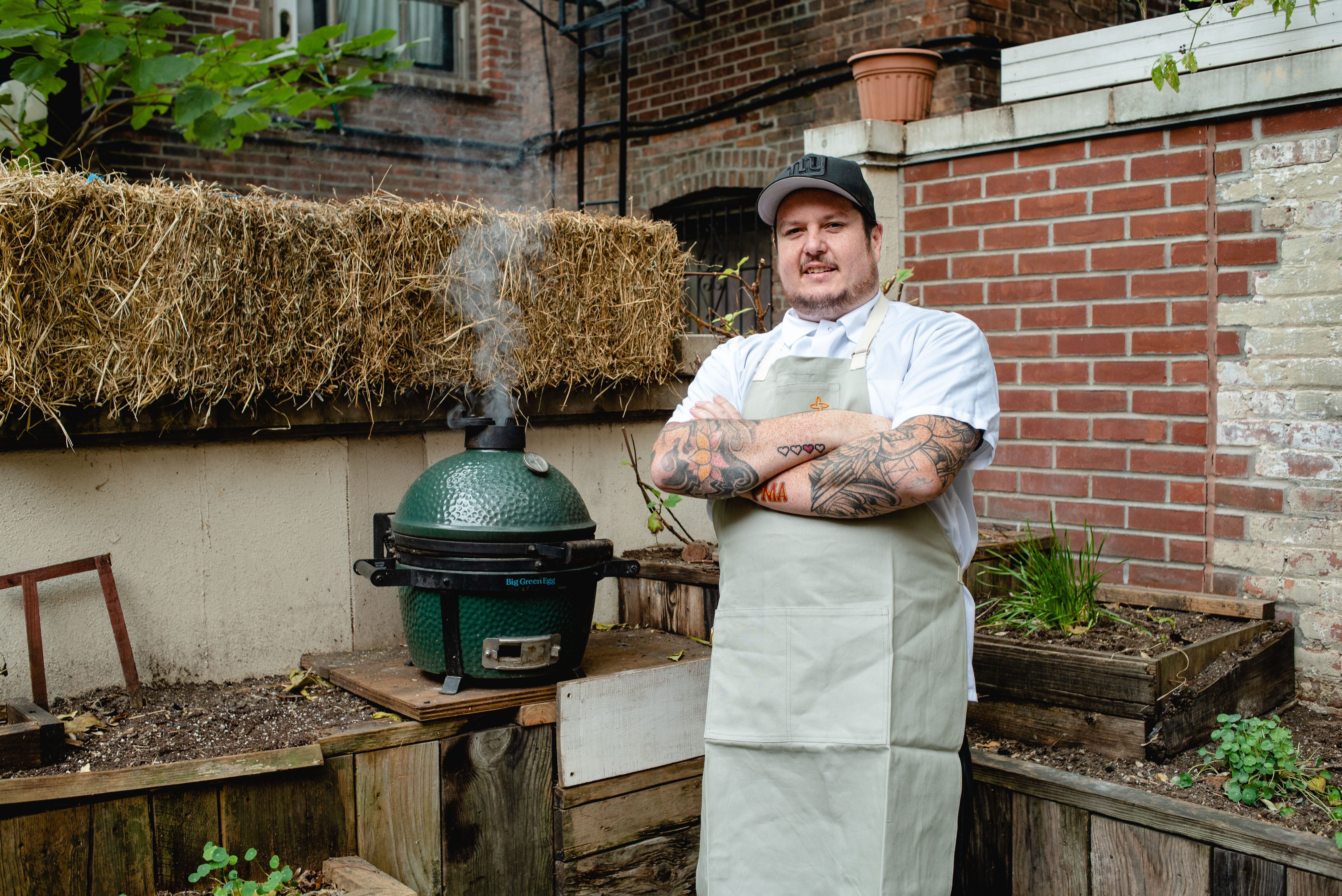 The Musket Room in Nolita, New York, invites visitors inside to rustic yet contemporary space. Rough brickwork and dark timbers are brightened with floor-to-ceiling windows, overlooking an intimate kitchen garden – rare in this part of the city.

It is here that New Zealand-born co-owner chef, Matt Lambert, creates a tasting course menu. His work is a stunning blend of American and New Zealand flavors, using Lambert’s signature style and technique.

The Musket Room opened in June 2013 and received one star from the Michelin Guide, New York Edition 2014 only four months later. It has maintained that star for six consecutive years.

I interviewed Mr Lambert about his childhood memories in New Zealand and his success story in New York. 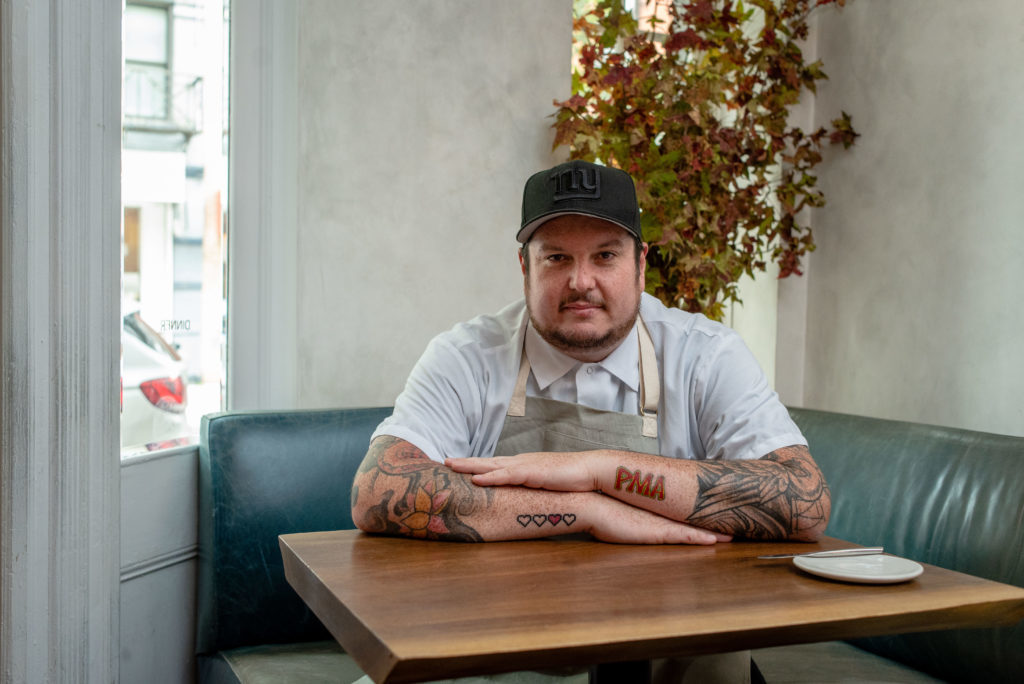 I was always considering becoming a professional chef

Could you tell me about your childhood and food memories?

Lambert：
I’m originally from Auckland, the largest city in New Zealand, which has only around 1.45 million inhabitants. There’s so much wide open space. To the west there are vineyards, orchards and freshwater creeks, where I used to go fishing for eels every weekend.

My mother and grandmother used to make a lot of jams and preserves with the fresh local berries. We had a pretty substantial garden at the backyard so we ate a lot of foods from the garden too.

One of my earliest food memories is from our neighbor, who had a  refrigerator in his backyard which he’d turned into a smoker.  We’d catch local fish and then smoke them. Another one of my earliest memories is sitting on the back step and just shelling peas for hours – well, it felt like hours!

I’ve never had New Zealand cuisine. Could you define it?

Lambert：
Sure but that’s difficult to answer. We are basically famous for our kiwi fruit and seafood, but the culture of New Zealand is so young. It hasn’t had time to develop like Japanese food has. But for me, New Zealand cuisine is the unique food of its native people, the Maori.

Much of this culture has been lost. When the British came to New Zealand, they brought animals such as cats as dogs as well as farm animals such as cattle, deer and sheep. These destroyed much of the natural environment in New Zealand, which had no large native animals for hunting. It just had birds, especially kiwi and wood pigeon. Some of their sub-species nearly became extinct.

The Maori had methods of cookery that are still communicated from generation to generation. A particularly important one is the hangi, or in-ground fire stove, also seen in Peru and Hawaii. Many New Zealand flavours are originally from overseas – from England, Ireland, Scotland, Germany, even  Mexico and China. The Chinese brought gooseberries, Mexicans brought passionfruit, Europeans brought wine from Europe, the English brought lamb and so on.

When did you realize you wanted to become a chef?

Lambert：
When my parents asked me what I would do when I got older, it was always a chef – although maybe at one point I also wanted to be an Indiana Jones (laughs). I really enjoyed cooking with my mother and grandmother. I vividly remember sitting at the bench, baking with my grandmother and then licking the spoon afterwards.

When I was 12, I applied for my first job. This was actually selling candy door to door, but I got into the restaurant business at the age of 14. I found myself working in the kitchen of a big steak and seafood chain restaurant in New Zealand, and someone asked if I wanted to wash dishes. I had left high school two years earlier than my friends to learn cooking at Auckland University of Technology. I started to work full time at the age of 17.

But I kept thinking that wanted to stay ahead of my friends, since I’d started working so early, so I had this goal to open a restaurant by the time I was 21. And I was 20 when that happened but it didn’t work out well, because you don’t know anything at that age! I later had to go back to the drawing board and do some more learning, which was the one of the best things that could have happened to me. I realized I’d only been rehashing what I’d been doing for others, and sooner or later you run out of options on that approach, you know?  I relocated to Wellington with my family where I worked in various restaurants and when I was 19, randomly I had to go to  Whitireia Community Polytechnic for completing my degree for one year.

What did you do after graduation?

Lambert：
In 2000, after my mother and I bought and opened a café in Wellington, I returned to Auckland on my own to work at Mediterranean place. The right next restaurant was one of the best restaurants in the country, Vinny’s. I was asked to go next door to borrow stuff. I formed a relationship with the owner and head chef, Michael Meredith, who later opened The Grove, and I started to work with him as a chef. He is still a kind of mentor for me. 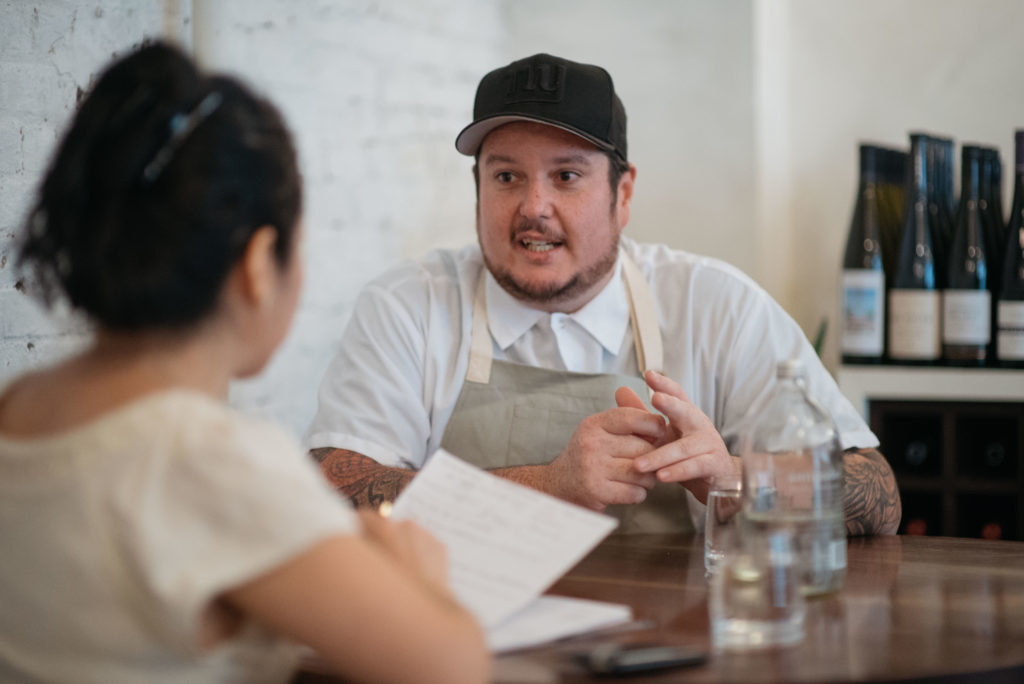 What did you learn from him?

Lambert：
Michael taught me that I had to take things even more seriously than I was. The people in my previous role weren’t exactly what you’d call professional. Michael was one of the best chefs in the country, yet he was a very humble man. He impressed me with his ability to stay current on global culinary trends and he was one of the first to encourage me to move to the US.

I also got lucky because while working with him I met my wife, one of the wait staff at The Grove. She is from Connecticut in the US, and I’d always dreamt of opening in New York.

Lambert：
It was 2007. Soon after relocating to Connecticut,I  was hired as sous chef at the restaurant in Woodbury and worked there for two years. But I kept my focus on New York City because it has a lot of Michelin-star rated restaurants. I was looking at chefs such as Gordon Ramsay, who had three Michelin stars; or Michel Gras; and I’d just learned about elBulli ; all three-star restaurants. I wanted to take that path too, because I feel that having three Michelin stars is the most sincere accolade you could get.

Lambert：
It was really cool but also stressful (laughs). I won, so that was good, but I think a  TV competition can end your career. I don’t want to be a TV chef; there’s a kind of humility in just doing your job. I’ve also had the opportunity to do Iron Chef a couple of times and another show on Netflix, and Beat Bobby Flay on Food Network, but it’s not my main interest. I’ve seen people go down that path, but they end up forgetting who they set out to be. This restaurant is way more important to me. 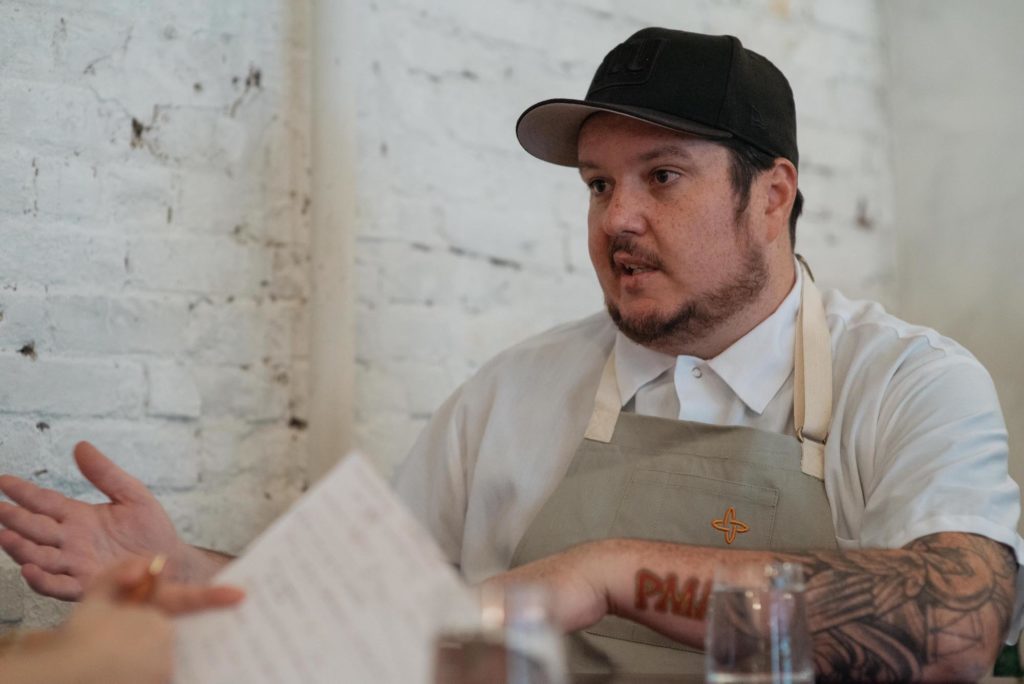 My food is simple and honest

So then you opened your restaurant, The Musket Room in 2013. Did you want to go with a New Zealand style ?

Lambert：
Yes, we started this concept in New York because obviously it’s very hard to find New Zealand cuisine here, being so far away.

A musket is a gun, right?

Lambert：
Basically, the era of the musket was a period of discovery. People had no refrigerators, and didn’t know what they could and couldn’t eat. This is my first restaurant, and is also full of discovery. When you come here, you’ll taste certain dishes for the first time ever, and if it’s good or bad, then that’s all on me. It can’t be someone else’s fault, because it’s my food.

At The Musket Room we also romanticize a lot of things about the past: the ideology of using everything, preserving everything we can. When we can, we grow our own stuff although there’s only room for herbs in this garden – mint, woodruff, thyme, amaranth, nasturtiums.

How aboutanother ingredients? Are these also local and seasonal?

Lambert：
We use seasonal foods much as much as we can, although I can’t claim to be purely seasonal. Not much grows in New York in winter – mostly potatoes, radishes and turnips. If we were really seasonal, we wouldn’t have lettuces or herbs in winter. I don’t want to tell people things that are untrue.

Can you tell us more about your New Zealand ingredients and wine at your restaurant?

Lambert：
Much of the venison, salmon and olive oil we use comes from New Zealand, as well as some freeze-dried fruits and vegetables. I try to bring more, such as New Zealand fish and clams.

We serve a lot of New Zealand wines  – at least 55 per cent on the menu. We even have some Australian wines – we had to give the Aussies something [since we beat them at rugby so often] (laughs).

What are your signature dishes?

Lambert：
We have several. One is the New Zealand red deer with flavors of gin ($38), which is venison with a jam of juniper berry, a liquorice jus, cilantro, a coriander puree made with celery seeds – all ingredients that also flavor gin. This is partly grounded in traditions, since juniper is a go-to flavor for venison. I’ve tried to take this dish off the menu a couple of times, but people come here and say “we came for the deer” and so we’ve had to put it back.

There are two other dishes we haven’t removed since opening. One is the quail from our Tasting Menu ($95 or $160) with onions and pickled blackberries, and the other is a passionfruit pavlova dessert, with whipped cream and Harry’s strawberries ($14). It’s really good. We’ve also done beef bone marrow, battered in tempura and served with sea urchin – we call it New Zealand sushi. People keep asking for these things, so we often put them back on the menu.

You use a good amount of Asian ingredients, including Japanese, right? Any other restaurants you worked have for Asian menus?

Lambert：
Most food in New Zealand had been pretty much French-based but It was really just that while working at the Grove that Michael Meredith started using all sorts of Asian ingredients, such as Kaffir lime leaves, ginger, lemongrass and so on. 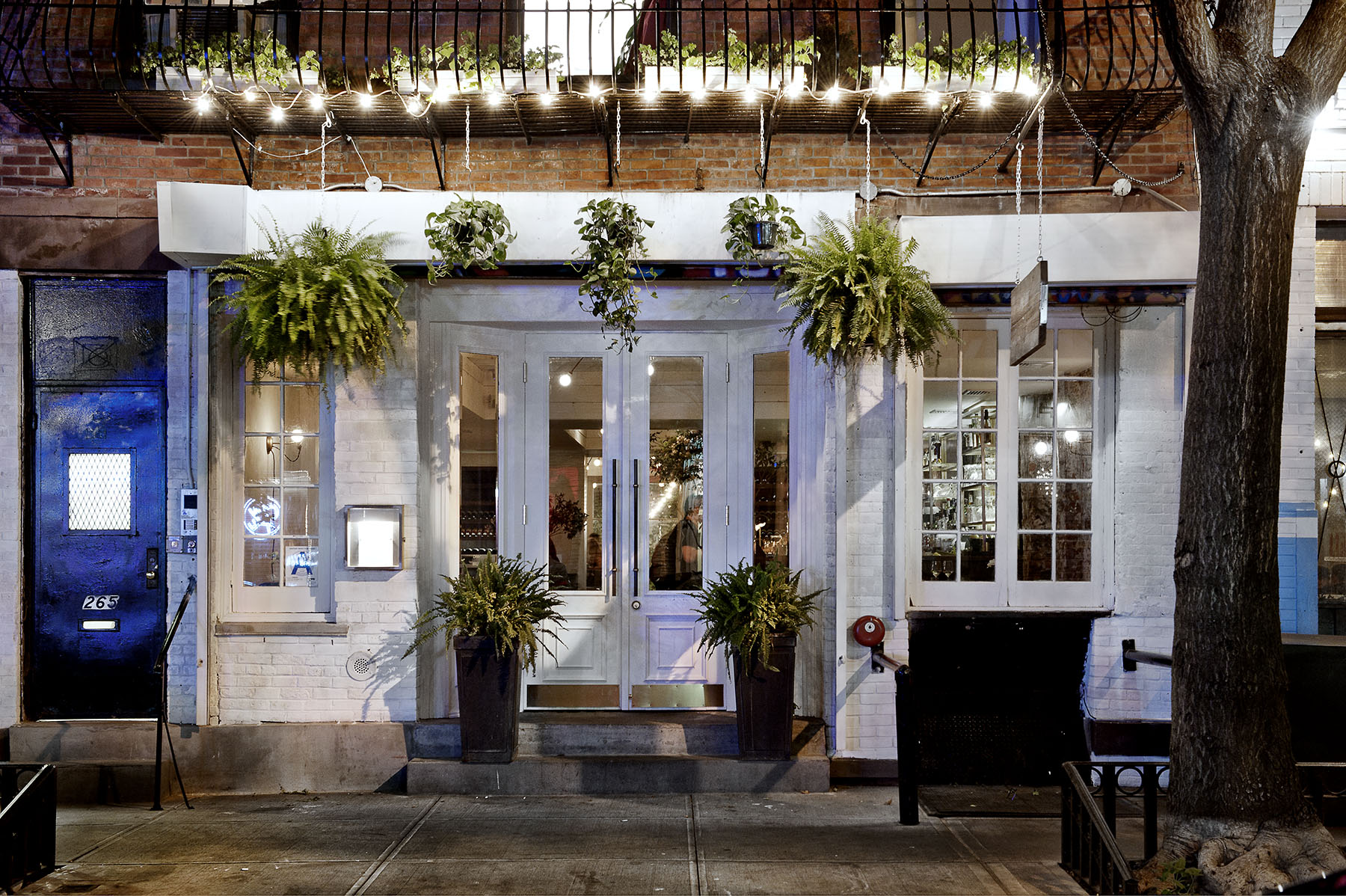