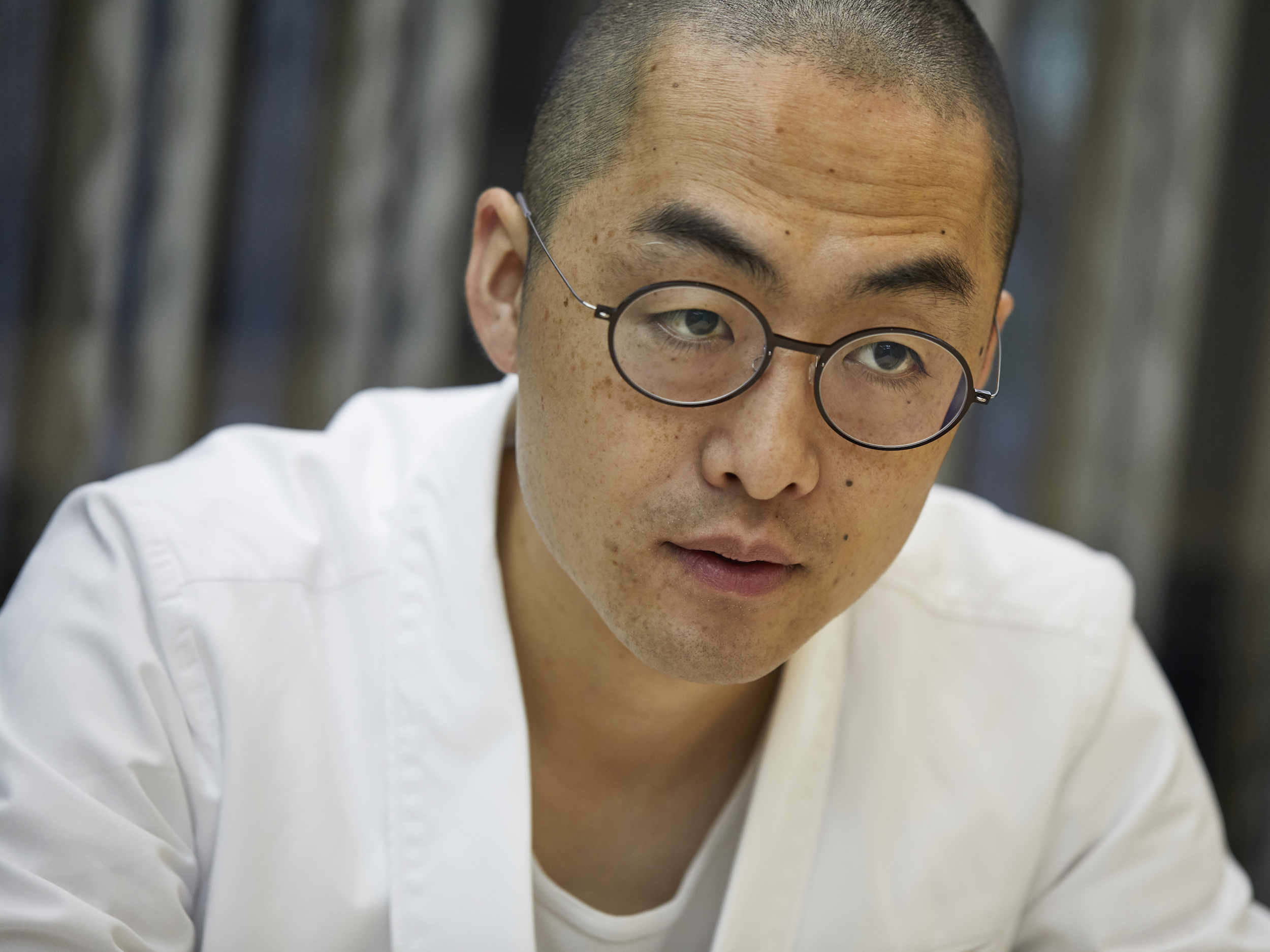 Born in 1982 in Fukuoka. He had long admired cooking and had already decided to enter the field of culinary when he was in lower elementary school. Right after graduating high school he started his training at a Sushi restaurant in Fukuoka, and in order to hone his resourcefulness, which he considered more important than skills, he worked for 10 years at the same place.
Along the way, being impelled by a spirit of inquiry about how Japanese cuisine is known outside of Japan, he moved to Amsterdam temporarily. Following the bond made there, he moved his base to Paris, France, where he sometimes experienced training in French cuisine, and developed Sushi by himeself due to oveas restrictions, and gained one star from the Michelin Guide. I took a chance to hear from Mr. Hanada, who plays the role as an missionary on the front line in an era where customers continue to grow and “real” Japanese cuisine is in demand, about the meaning of being a Japanese Sushi craftsman to working abroad. 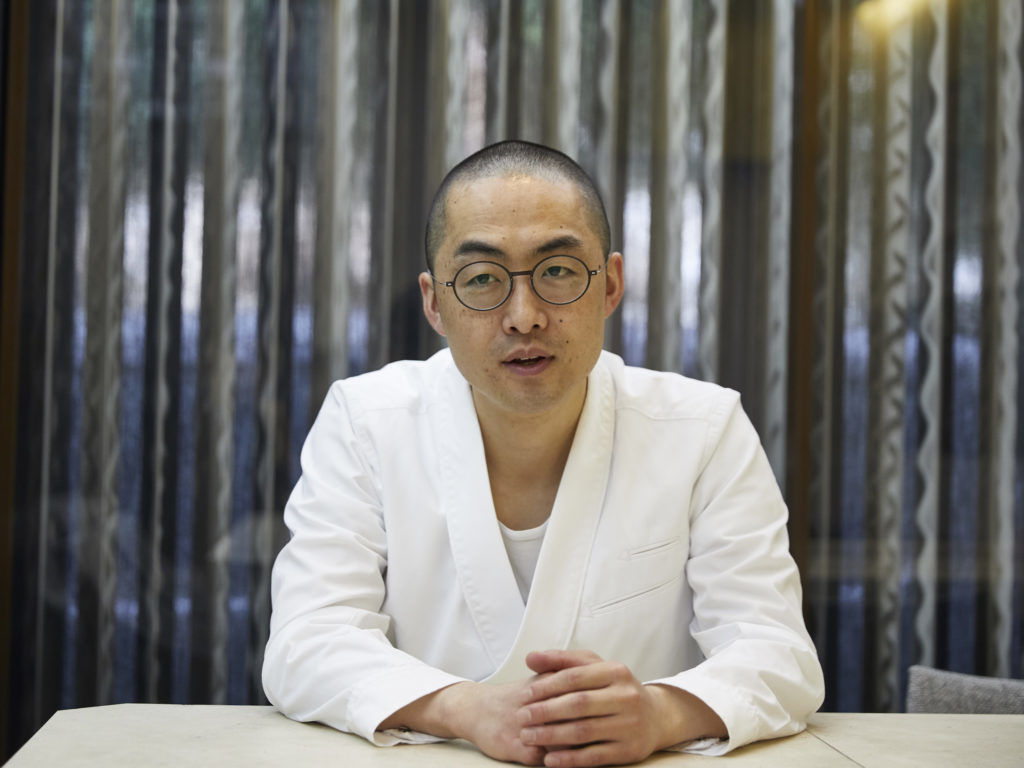 First 10 years . The essence of training is of course mastery of the techniques but moreover growth as a man.

Please tell meabout how you entered the field of culinary.

Mr. Hanada:
I watched the TV program, “Iron Chef”, which was broadcast a long time ago and I thought chefs were cool, and various things came up, I decided then to enter the field of culinary when I was an elementary student. So right after graduating high school I entered the cuisine profession.

So it was not western food that you admired?

Mr. Hanada:
I thought it was okay to try western food as an experience, but I thought after all I should do the cuisine of my home country first.

Before you came to Paris in 2012, what kind of restaurants did you train in?

Mr. Hanada:
There was a connection with a Sushi restaurant, which was a favorite of the owner of my father’s company, and I started working right after graduating high school. After that I worked there as a Sushi craftsman for exactly 10 years. Along the way I thought to see the world, so I lived in Amsterdam with a connection to my workplace for 2 years, but in Japan I only worked at one place. 10 years was an important number for me.

Mr. Hanada:
Because from the young master of that restaurant I was told the importance of the number of “10 years”. I was told that training was to focus more on growth as a person than one’s skills. I was told that it was to experience the same environment and the same relationships, how I should get along and how to communicate with customers, by staying at the same place for 10 years. 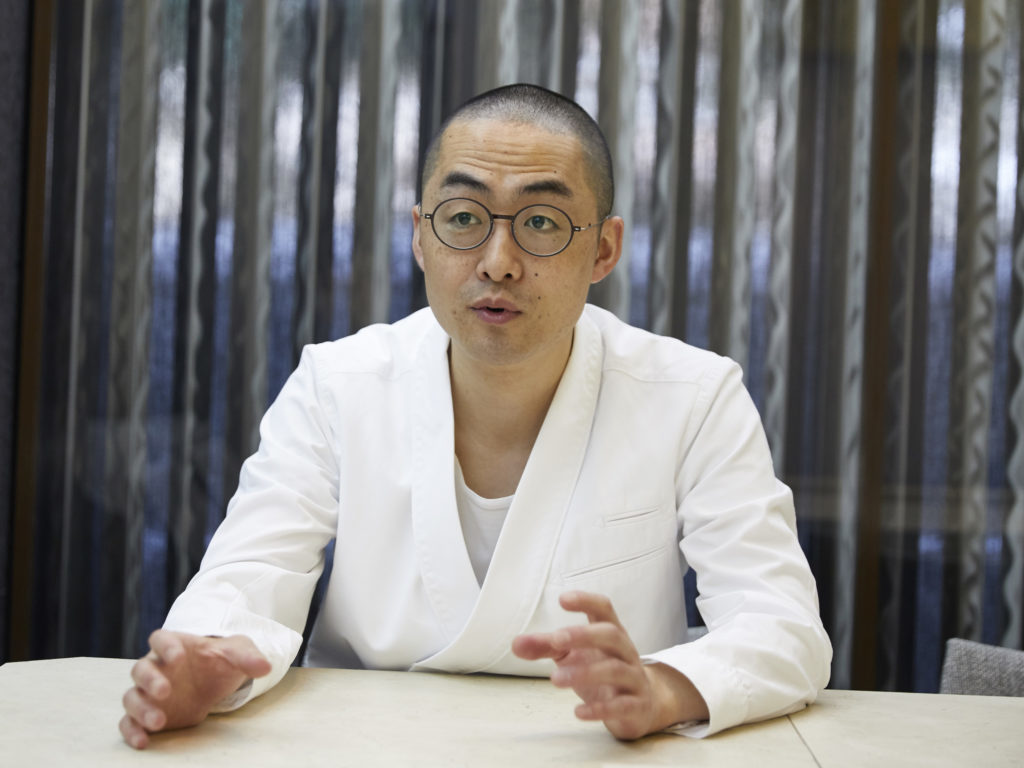 The Essense of Sushi craftsmen challenging from abroad which I noticed for the first time by traveling outside of Japan – training in Japan was the only chance to master the skills.

What was the chance that led you to go to Amsterdam during your training in Japan?

Mr. Hanada:
I had people around me who traveled abroad, so I simply thought that I wanted to do it, too.
I wanted to know what kind of ingredients there were using in the world and how Japanese cuisine was thought of. Then from a connection at the restaurant I was working in, I was told that the Japanese restaurant at the Hotel Okura in Amsterdam wanted staff, so I utilized the chance.

In Amsterdam what kind offood did you make?

Mr. Hanada:
Japanese cuisine in Amsterdam was totally different from the Sushi restaurant in Japan. Of course, it was not Sushi but Japanese cuisine, so the ways of preparation were totally different and since the size of the restaurant was big I was shocked by the power of having more than 10 chefs. It was not only that, but due to the location of the hotel, the advanced environment of the Netherlands, and thestrong demands of local Dutch customers who wanted genuine Japanese cuisine. It was a great stimulus for me to evaluate the true value of “How I can tell authentic” as a Japanese chef.

You spent 2 and a half years there, then you returned to Japan again, right?

Mr. Hanada:
Yes. I noticed for the first time when I traveled outside of Japan, but I thought that what I could depend on when I fight as a Sushi craftsman abroad were my skills. Because for example, if a French chef or Italian chef is based overseas, so we can train outside of Japan. But when you go out as a Sushi craftsman or Japanese chef, there is not much of a chance to master further skills, but rather you have to fight depending on what you have learned in Japan until that point. About Japanese cuisine and sushi technics, there are many chances to learn in Japan, but there is no such great chance like that abroad. So it is important to learn skills in Japan that take a long time. I noticed that for the first time when I went abroad and thought to return to Japan and improve my fundamentals again. Then I went back to Japan and continued to train further for another 12 months. 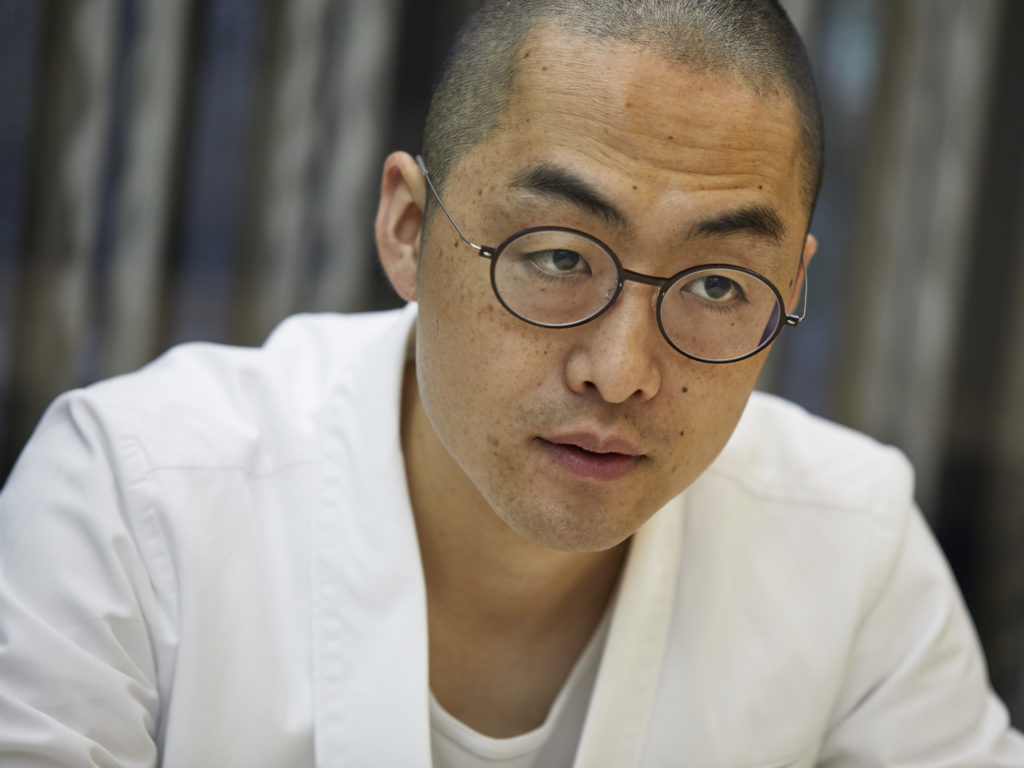 Working abroad. It is impossible to see what the restaurant is like from Japan. So I needed to rely on others.

What was the chance to come to Paris?

Mr. Hanada:
From the time I was in Amsterdam, I often went to Paris. I could have various inspirations and moreover it was close. From a referral by a person I got to know then, I was offered work as chief chef at a Japanese cuisine called, “BIZAN” in Paris.
Of course, I wanted to prove myself abroad so I was happy and accepted the offer.

After that how were you assigned to work at the current Sushi specialty restaurant, “Sushi B” Paris branch?

Mr. Hanada:
When I was in “BIZAN”, I got an offer. But when I was offered the chief chef position, my contract with BIZAN was not completed, so I rejected the offer many times. However, the enthusiastic offers did not stop, regardless of the number my refusals. Since I was asked countless times, I decided to ask for advice from the person who introduced “BIZAN” to me, and finally I was given permission. As a result, though my term was not over, but since I was determined to try making sushi at the Sushi restaurant in Paris, I was allowed to resign from “BIZAN” where I had worked for 2 years and move to “Sushi B”.

Are there many Sushi craftsmen around you who want to go abroad like you?

Mr. Hanada:
I think there are many, but most of them are in the situation of not being able to though they want to. There is no family, not brave enough, or are unsure of the kind of working environment and conditions are there. You really cannot see clearly only by the information on the internet, so most of them hesitate to make a big decision. Actually, though there are job advertisements for positions at Japanese restaurants there, honestly it is not that transparent in the kind of atmosphere, how the owner is, the salary system and visa. It is honestly impossible to go out betting your life under that situation.

Is there a need for Sushi craftsmen abroad?

Hanada:
I think they are welcome, at least, in France. Rather they are in short supply I think.
When I went to London, a while ago, I talked with a chief chef at a famous Japanese restaurant. It was impressive that he was saying, “I really crave for craftsmen ofJapanese cuisine.”. If you have enough skills, I think the restaurant will arrange for a visa, and there are great chances. Though there is demand for sushi craftsmen and chefs of Japanese cuisine, and there are people who want to go abroad, there is a situation that they can not be matched well.

On the other hand, in the field of French cuisine, many Japanese chefs have built connections with France, so there is a system that young chefs can travel. It might be time for Japanese cuisine to make a similar system. 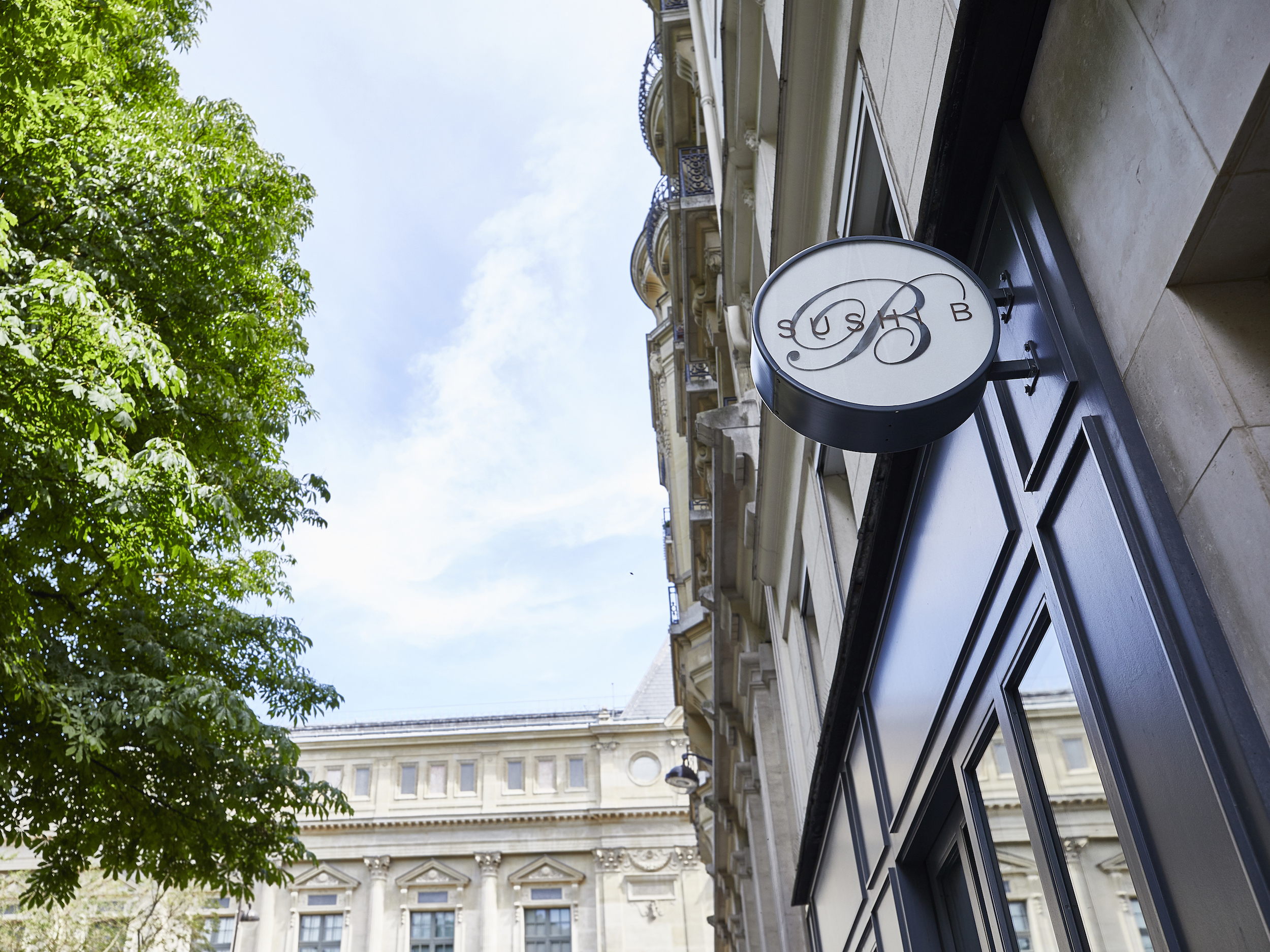