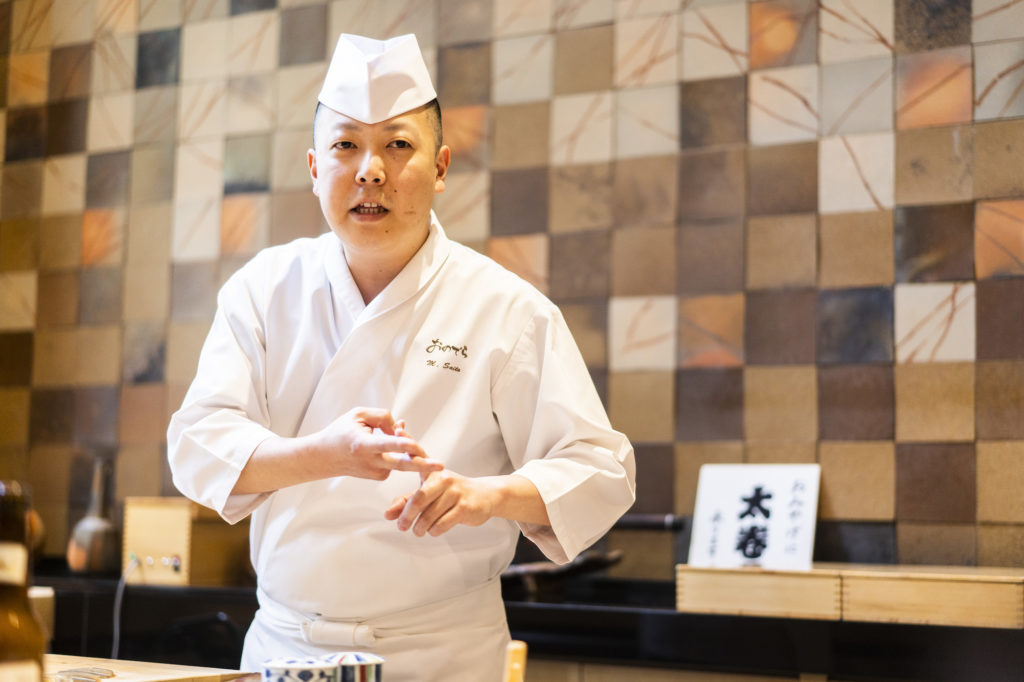 How did I win a star? I don’t know either. That’s why I just work really hard and do my best.

You won a Michelin star five months after the opening this restaurant, and in the second year (2018) you got two stars.

Saito：
I was so delighted with that. I never expected a Michelin star. My colleagues and I celebrated together on both occasions.

What do you think is the secret to winning Michelin stars?

Saito：
If I knew that, I would write a textbook or something and sell it as my method. I don’t know how to win Michelin starts, which is why I just work so hard and do my best. People say, “You won a star in the first year and two stars in the second year, so you might get a third one in the following year”, but it’s not that easy. Still, I can understand why people might think that.

Successful people like you have often experienced failure in their lives too. Is this true for you, and can you tell us how you got through it?

Saito：
I really don’t have any failures, except for losing at horse racing (laughs).

Well, admittedly there have been some frustrations. When I was starting out I didn’t feel this, but five or six years later when I was more skilled, I felt that there was no better sushi chef than me. So I felt that I was not getting recognized for my skills, and that was really frustrating.

For example, imagine if you were a runner and wanted to run the 100 meters in less than 10 seconds. If you did it in 9.99 seconds, you would feel ecstatic with your result. I felt I was achieving such goals in the kitchen, but that people around me were saying, “No, actually it was 10.1 seconds because the wind speed was wrong.”

At that time, I had no answers in response because my personal brand was not that strong. Seniority is valued and respected in Japan, but here in the US, it’s simple: you are judged by your ability and skills, and that is really great. 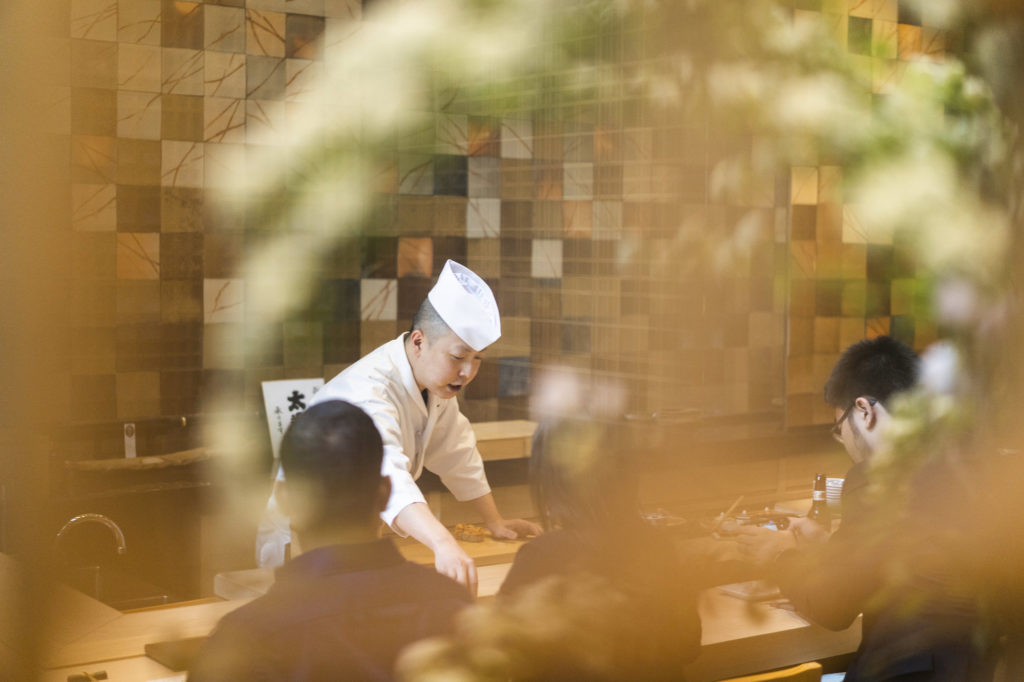 Has it been stressful for you to work overseas?

Saito：
I found it stressful earlier, because the language and culture are so different from Japan. But people here are very supportive, and I am thankful for that. As my customers are really smart, they make an effort to understand my poor English and have enjoyable conversations with me using simple words. Recently, my mother reminded me: “You are always lucky with the people around you. Don’t forget to be appreciative of those who support you.”  This is really true.

How do you spend your time out of work?

Saito：
For the past two months, on my days off I’ve been going eat out on my own to eat at a steakhouse. I order seafood rather than steak, have some drinks and then chocolate cake for dessert. It feels very luxurious to have this time on my own. Don’t you agree that it sounds like a great day off?

You really like seafood! Could you tell us which steakhouse you go to?

Saito：
I’d rather not, because I really value my private time. In fact, I don’t even go to any famous restaurants because I might see someone I know. That would be the end of my private time. I always use my intuition to find a good restaurant with reasonable prices, and I don’t check any guidebooks or the internet. 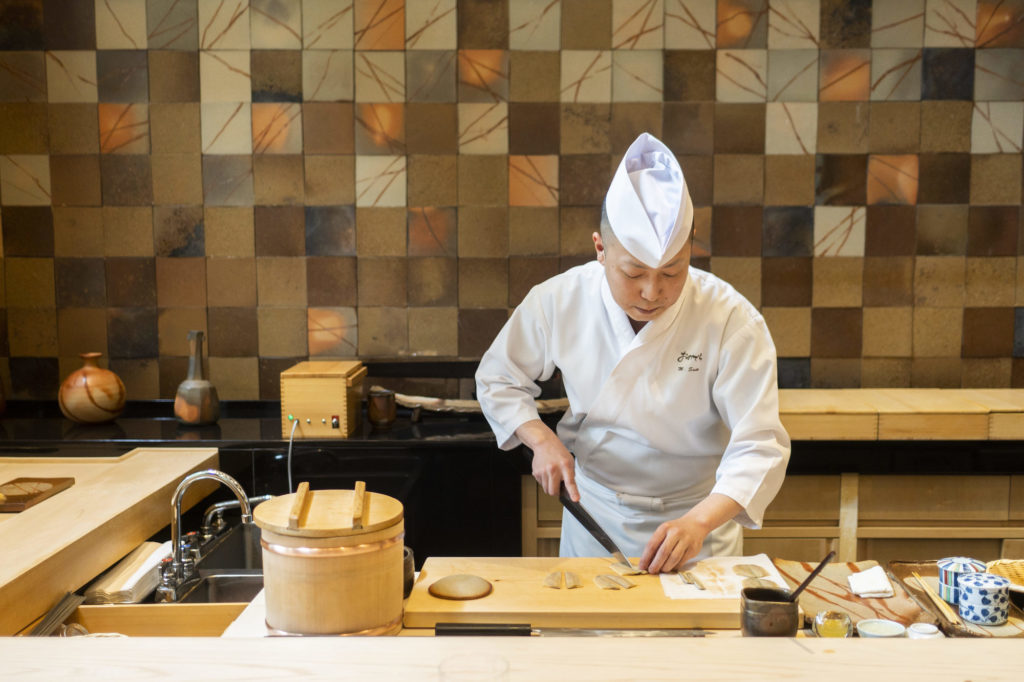 I would like to be on the same level as my customers.

What is your next goal?

Saito：
I would like to open a new restaurant. It doesn’t matter if the restaurant has my name or not. I don’t mind if I’m owner-chef or not, or even if it’s a sushi restaurant or not. I just want to be more successful and I’d like to try new things to elevate my life to an even higher level.

Something I’ve noticed after 13 years in this business is that I struggle to manage people, and that managing is not what I really want to do. Rather than managing people, I’d like to understand what my customers really want.

To me, work is not something you do just for fun or because you like it. Those are feelings you might get from a hobby. Work is often something where you might not get along with your managers, you might not like the setting or you wish you could go home early, but you do it to earn a living. So I’d like to retire as early as possible after opening a restaurant, and enjoy the rest of my life.

Do you have a specific idea of where you might want to open your restaurant?

I’d like be interested in a location where the sushi market is not that big yet, but which has good business potential. There are cities like this all around the world. People still seek high-end sushi all around the world, and I’d like to bring them my sushi.

However, more than having my own restaurant or not, my primary goal is to be on the same level as those who come to eat my sushi. Some of my customers are millionaires. They come here from other cities or overseas, often by private jet. To achieve their level of success can only happen after achieving the same level of income. But maybe not quite at the level of having my own private jet, though (laughs). 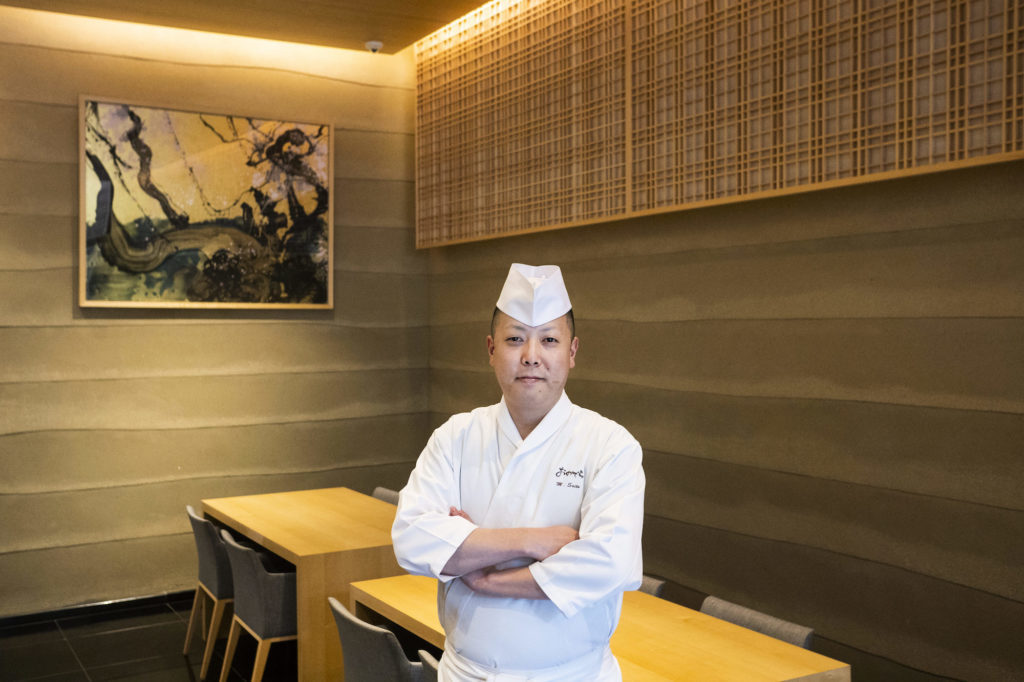 What kind of people would you want to work with?

Saito：
Anyone who has kokoro (‘heart’) (pointing to his chest). You don’t need to have great skills or talent. If you have kokoro, your progress and speed of growth will go faster.

For example, think about a teacher trying to teach a student about a pen when they already know what it is, compared to teaching someone who has never seen a pen and doesn’t know what it is. If a student should already know about pens, but suddenly can’t remember what they are, does that make the teacher responsible?

The teacher is responsible for teaching, but this becomes a problem if the person simply cannot remember their lesson. In that case, the student would be responsible. In other words, if you enter the sushi industry inexperienced, you depend on the ability of the boss to train you for several years. But after that point, some students realize their limitations in learning about sushi, or the fact they don’t even want to learn.

There is no way to teach if the student really doesn’t want to learn. However, if someone has less talent but is willing and has kokoro, I would like to work with them. With kokoro, both the teacher and the student will grow together faster.

But kokoro is invisible.

Saito：
Yes, but you can feel it. I can feel my customer’s kokoro through conversations or eye contact. A sushi chef should have a wide range of vision, like a zebra rather than a lion.

While working in my kitchen, I sometimes get offered great jobs by unbelievably successful people. I really appreciate this. As I mentioned earlier, my goal is not necessarily to remain a sushi chef, but simply to excel in a role where I can use this wide range of vision. 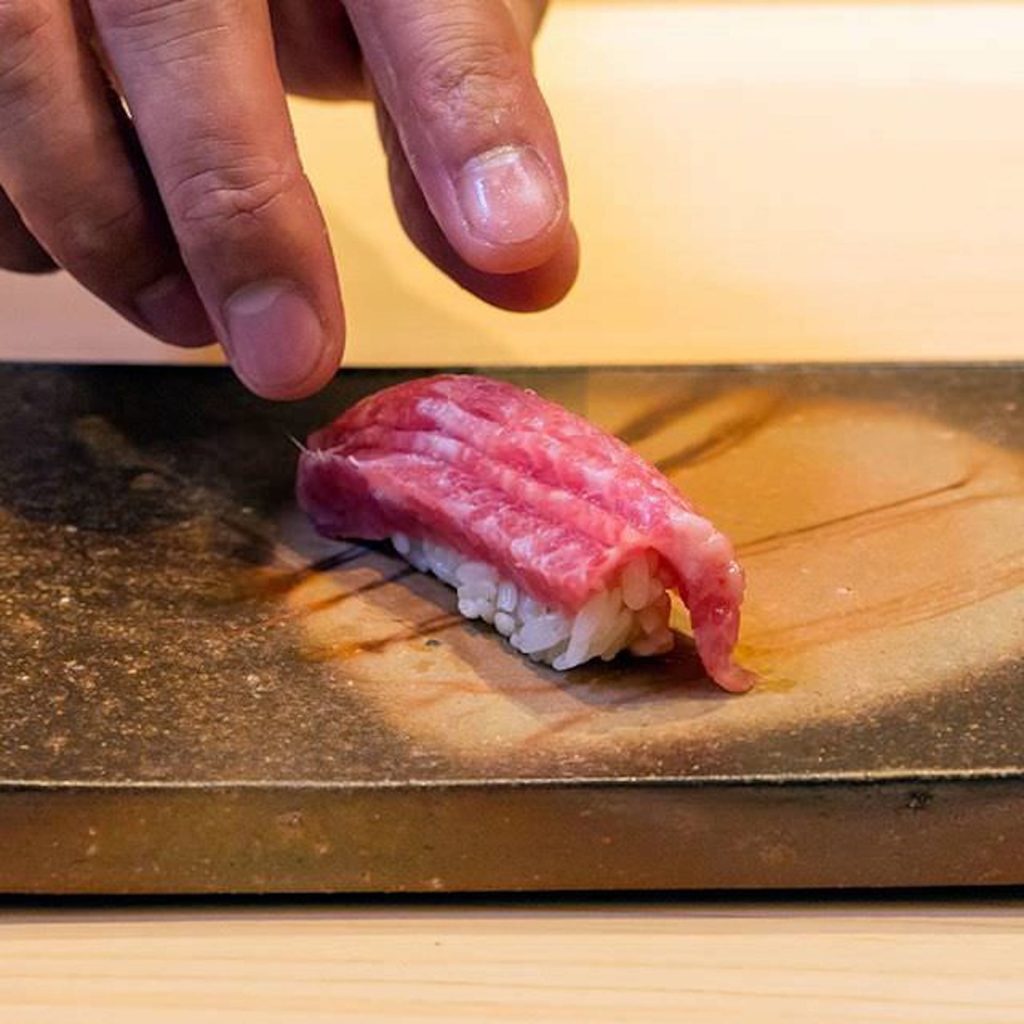 Onodera New York made me feel like I was back in Japan. While I interviewed Mr. Saito over the sushi counter during the lunchtime, customers were enjoying his sushi and conversation. One customer approached Mr. Saito with a wide smile of appreciation before leaving. I was impressed to see these successful customers showing the highest respect and appreciation of Mr. Saito's brilliant talent and Japanese craftsmanship. Their kokoro was very clear.
Prev Page
Next Page 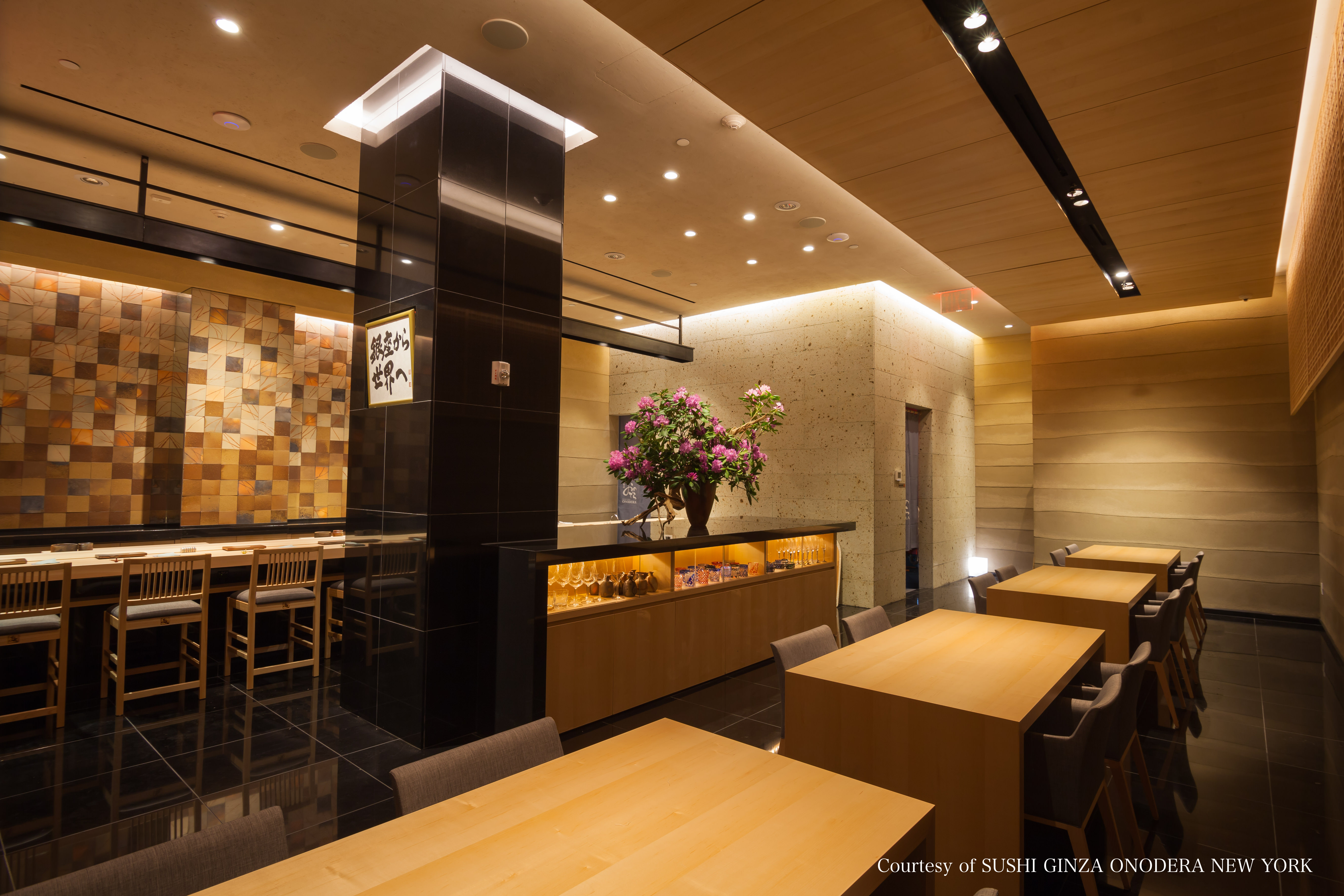