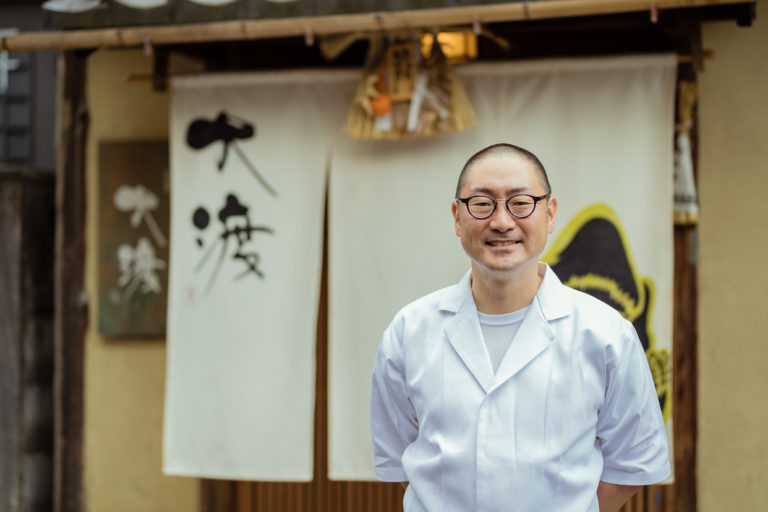 After building up a substantial repertoire at restaurants like the famed “Kisetsu Ryori Tsumura” in Osaka, Chef Owatari ventured out to his wife’s hometown of Kyoto to open up a place of his own at age 34. From there he earned a star in from the Michelin Guide in 2012, and then he picked up another two stars from the 2016 Michelin Guide. Currently you can find him at “Gion Owatari,” a much loved favorite among locals. As an up-and-coming chef in the culinary world he has collaborated with chefs from various disciplines, and he manages to consistently push forward into new territory without forgetting the traditional classics. He tells us that his restaurant is “not in the style of Kyoto cuisine,” so we decided to talk to him about his approach to food and how he ended up where he is today. 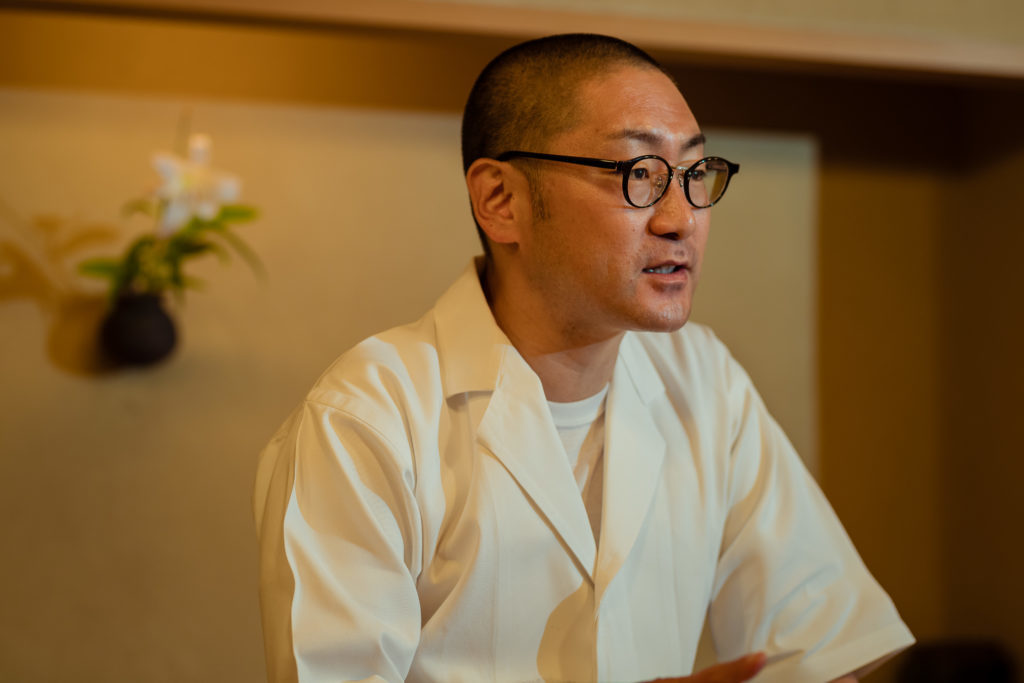 A young boy growing up in Fukuoka with a love for baseball, who eventually crossed paths with a bit of serendipity that showed the way forward to a career in cooking.

I heard that you’re originally from Fukuoka. Did you first set your eyes on becoming a chef during your childhood there?

Mr. Owatari:
I lived in Fukuoka up until my high school graduation, but all I did was play baseball throughout grade school. Baseball was the only thing I ever really thought about back then, and of course I wanted to become a professional player, which is pretty typical when you’re at that age.
The summer at the end of my 3rd year in high school came around and the superintendent came to ask me about my hopes for the future.
I remember thinking about how I didn’t want to be bothered with anything that wasn’t baseball (laughs).

Back in those days there was this TV show on NHK called “Iki no Iiyatsu.” It was about this chef played by Kazuhiko Kanayama, and I really enjoyed watching it.

I wasn’t like I was especially interested food or anything, but I did like the idea of making things from scratch and making people happy as well. I knew that I wanted to go on to be a company boss, or rather it was more about being someone that worked their own schedule without having to be subordinated to anyone else. I wasn’t suited to that typical corporate employee lifestyle. This is why I was attracted to the possibility of working as a chef and opening up a restaurant on my own.
So with all of that in mind, one of my teachers at school suggested, “Well, if you want to become a chef, then maybe culinary school is the way to go?”

In those days it was completely normal for kids coming out of junior high to go off and start training in the kitchen. Kids like that got an early start, so it was made clear to me that it would be in my best interest to head off to culinary school to avoid falling behind. So, from there I went off to attend Tsuji Culinary Institute in Nakanoshima, Osaka.

How did your parents react when they found out about your plans to become a chef?

Mr. Owatari:
My father was strongly against it. Both of my parents worked at a major company so obviously they expected that I would also go on and work in that type of environment as well. But, my father was outraged when graduation came around and I abruptly told them about my plans to work as a chef.

You had a stable future laid out in front of you, but instead you decided to make a drastic change?

Mr. Owatari:
I prize my own independence, so I can’t say that I have any regrets about that whole situation. But, you know back in our day the world was a much stricter place than it is now. You would start work at 8 in the morning, break for about 30 minutes, and then stop around 1 or 2 o’clock. After that you would just spend your time tidying things up. It would just be endless cycle of shifting around and standing. As you can imagine that all sounded miserable to me.

But the thing is, I didn’t want to hear “I told you so” from my father later on, which meant that it was important for me to keep carrying on no matter what.
This encouraged me to never ever think about giving up.

Why did you pick Japanese cuisine rather than something like French or Chinese food?

Mr. Owatari:
The cooks on I watched on TV dramas made Japanese food, so that’s all I thought about. Close to 80% of the people around me chose Japanese-style cooking as well. When it came to people who picked something outside of Japanese food, it would be because they ate Chinese food at home and so they went into that style of cooking, or they went off to become a pastry chef because their family was in the confectionary business or something like that. 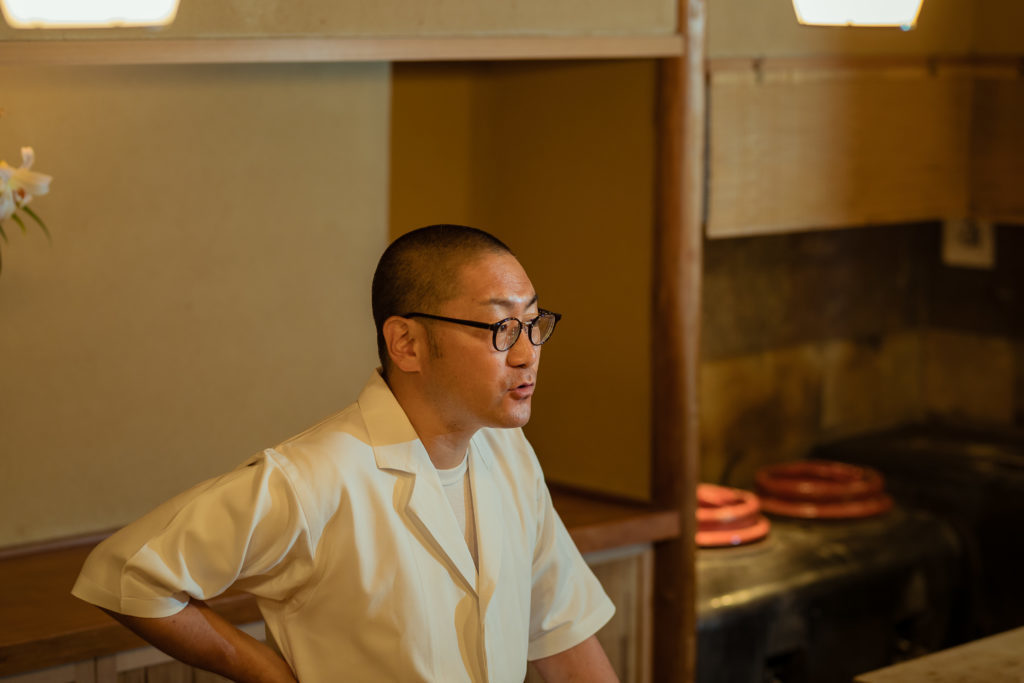 What was it like when you entered culinary school?

Mr. Owatari:
It was amazing compared to grade school! (laughs)
Back at school they had selections for national competitive meets between students, and I was picked before.
But, I didn’t have any interest in job hunting, and so I never gave any serious thought to my career after graduation. I was put off by the idea of moving ahead anyway and joining in on finding a career.
I didn’t come from a family of chefs or anything like that, so my decision to study in Osaka was basically because of that phrase “kuidaore” (eat till you drop) that you hear about the city.

At the time there were restaurants that let you work while you were going to school, but the restaurant I was at let me live and work there. The culinary school I went to had students from all over Japan that had come there to study, and a lot of my friends there had the same situation as me.
After I finished culinary school I stayed on to keep working at that same restaurant. I was happy to work at any place that let me cook.

Mr. Owatari:
It was a Japanese-style restaurant that had a casual feel to it. They had lunch sets for 800 yen. Dinner had a focus on a la carte offerings and would total out to 5,000 or 8,000 yen, which is not by any means cheap, but it was never extraordinarily expensive either.

So you first came there to study and then you stayed on to work. About how long were you employed there?

Mr. Owatari:
I was there for somewhere between 5 to 6 years. I up and quit relatively early on and was able to take on a role as head chef for 2 or 3 years. From that time on I set out to better myself since I was already thinking about opening up my own restaurant. I booked up certifications for a sommelier and sake master, as well as bookkeeping.

It sounds like you had a very aggressive mindset?

Mr. Owatari:
There was an unprecedented boom in wine at the time, and even chefs that worked with Japanese food were taking on more expertise in wine.
I knew the chef at Kitcho from back in school, and up until then we never had a chance to meet up. I wanted to check out different restaurants, so I went with fellow sommeliers to fashionable new restaurants, as well as reputable places that had been around for a while.

But you know at the time to some extent I actually didn’t think Japanese food was all that good. I was still in my twenties and fairly inexperienced, but I wasn’t even into those small Japanese-style veggie dishes. I thought that Japanese cuisine was sort of a fixed concept.
However, I had an epiphany when I went out and tried different restaurants, and I thought that the food was pretty good. It wasn’t the kind of Japanese food I had been thinking of. 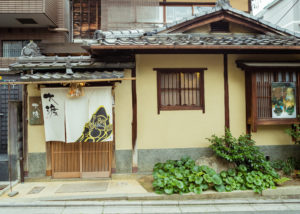