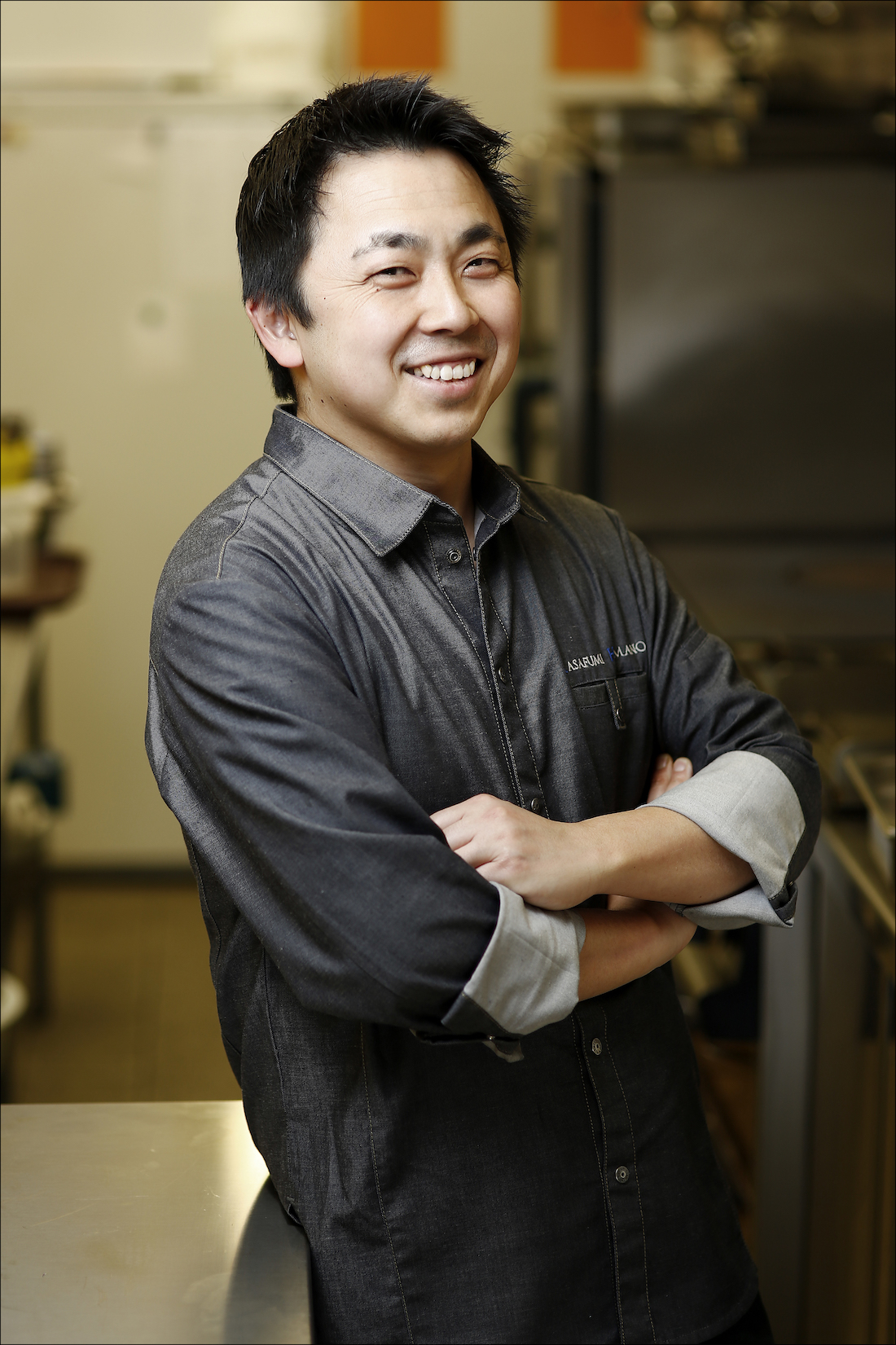 Departure to France. The one thing that gave me the courage to take the chance was something someone once said to me

After learning in Japan, you left to learn your trade in France. What was the trigger?

Mr. Hamano:
One day, a customer asked me “what is your favorite dish to make?”.  At the time I realized that I had no favorite and it opened my eyes. That is when I decided to train in France for 3 years in order to learn how to create “my own dish” in France.

Before leaving to France, I took private French classes for 2 hours a week in preparation.  After that, I received a student visa and registered for classes at a private language school in Lyon city where I spent every day studying French full time.
However, it was impossible to study full time and train full time on a student visa.  Since I wanted to study cooking, I came back to Japan and registered with a school where I could obtain a training visa along with my student visa that allowed me to also train as a cook and left again to France.  I studied French in the daytime in Lyon city and learned my trade at night and on the weekends.  My training grounds were “Nicolas Le Bec” and “La Plage”.

When I was at Nicolas Le Bec, I worked harder than I ever had in my life. He is a very passionate person. French colleagues continued to quit one after the other because the training was tough and strict. But when he was not at work or after working hours, he was a very cheerful and friendly person.  I was influenced by his cooking.
“La Plage” was not actually not a place I wanted to study.  The chef saw my resume submitted at another restaurant gave me a call.  So, when the phone call came and he asked “would you like to work with us?”, I was very surprised.  It was a casual bistro and there were a few people who told me it was not the best area to work in.  However, thanks to “La Plage”, I was able to find that special something that brings out my identity in my food.

What is the core of identity of your own dish that you discovered in the end?

Mr. Hamano:
Fruit. My cuisine always uses fruit. My sauce always uses fruit. I boil them down and match it with my sauce, I make it a confection.
I came up with it by chance when I made a Japanese flounder dish while at “La Plage”.  It is a sauce made with carefully boil orange juice and mixed with only olive oil. I learned the freedom of food while working there.  If you do it by the book, a fish sauce or Fond de Veau would be used.
Also, I love the Foie Gras Poêlé of “Nicolas Luebeck”, which is a dish that combines sweet and sour fruits in the sauce.  Since opening my restaurant, I have changed the fruits and the sauce for Foie Gras Poêlé and continue to serve it. 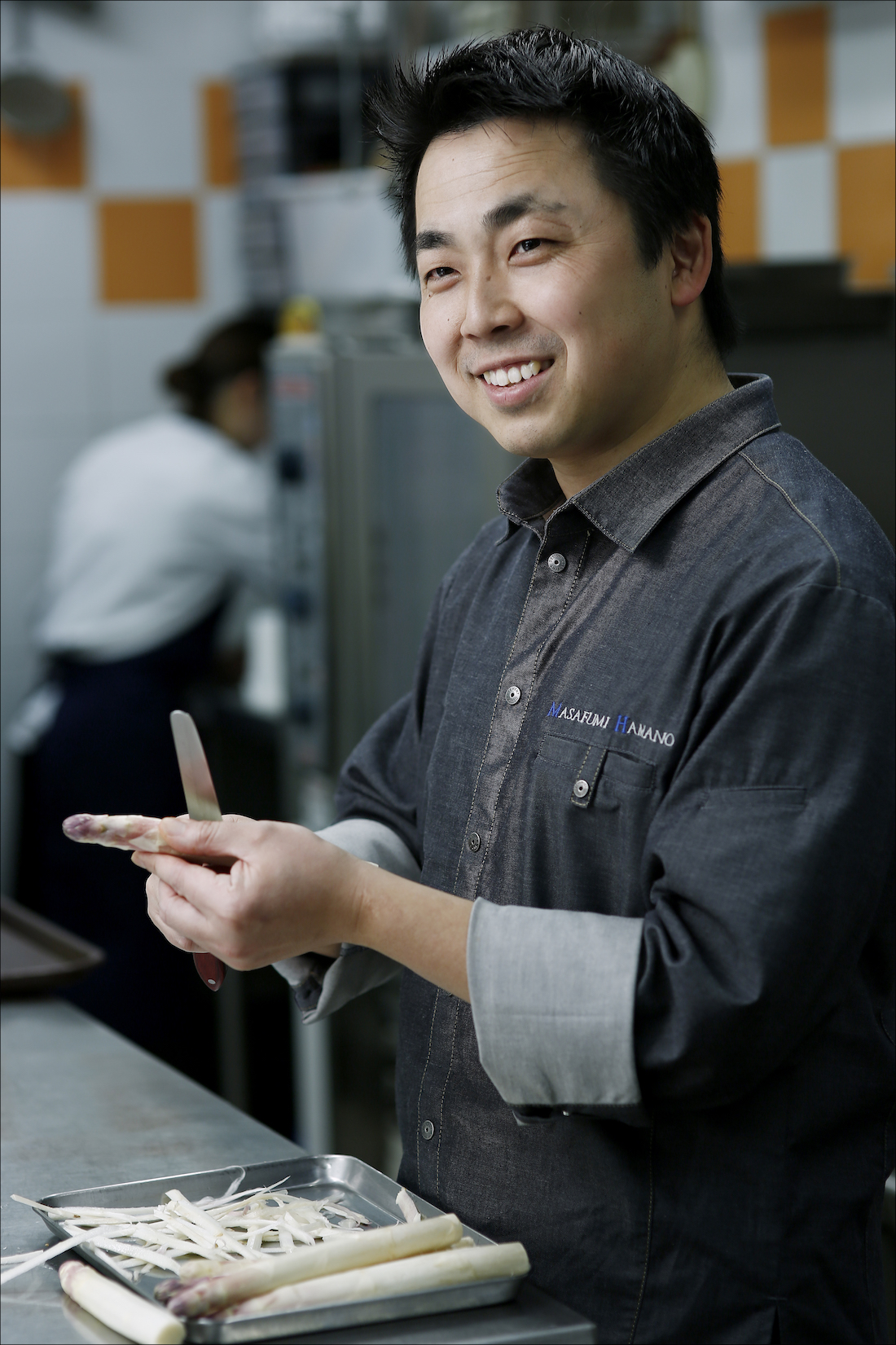 The road to the Michelin Star

Chef Hamano, you became a chef at “Orcatos Fèvilles Saint Vallantin” and won one star in 2012.

What was the road to your independence?

Mr. Hamano:
When I worked in Lyon, I was asked to help in the opening of “Ouchy of Ferrari Saint Vallantin”.  I worked for one year, six months before opening so I was there from the very start, from the preparation to the subsequent opening in December 2005.  The manager of that restaurant was someone I had already met in Japan and is my current business partner.  This was someone who helped me get my working visa while I was working there.

After that, I returned to Lyon again and worked for “La Plage” for 1 year.
In 2007 the first generation chef had quit, leaving me as the second generation chef.  Initially the owner told me to focus on making our restaurant one for local customers. As a chef, I was planning to build a restaurant that was high quality and at the same time continue to “challenge” everything.
This resulted in my being able to improve the restaurant gradually and I was able to win one star.

Michelin researchers came for the first time in 2010, we were published in the Michelin Guide for the first time in the 2011 and won a single star in the 2012 Michelin Guide France version.
Since I came back to Japan, I always kept in mind that I had become independent. I thought that if I am going to open a restaurant in France, I would have to work and visit the restaurant I liked many times to create “Saint-Amour-Bellevue” like when I was working in Lyon. However, there were no properties to buy.

Actually, there was talk about a request to open a restaurant in Japan at the same time. Eventually I chose to return to Japan and began preparing, but I found out that our current location had just become available and canceled my return home.
The reason I named this restaurant the way I did was because it made it really easy to borrow money from the bank. I made it “Au 14 Février”, the same name as the restaurant I had already won a star to make it easier to gain credit.

You won a single star in 2012 after two years since Michelin researchers came for the first time in 2010 to “Saint-Valentin”. After that, even after opening your own restaurant, you acquired one star within 4 months of opening.  That’s two stars in 4 years and 4 months. What do you think the meaning of winning stars with the Michelin Guide is?

Mr. Hamano:
There are many guide books but I don’t see the Michelin guide as a guidebook. However, as we operate restaurants in the French countryside, we cannot ignore the influence of the stars of the Michelin Guide. It has a direct effect on how customers’ choose where to eat.

It greatly affects the restaurant management, not only for our motivation and self-satisfaction, but also in favor of negotiating the purchase of wine from our business partners. So of course it is better to have a star.
Also, it may have a good impact on recruitment activities. The number of chefs who wish to work as a two star restaurant has increased.

Saint-Amour-Bellevue’s Mayor, Mr. Georges Blanc (the closest chef with a three star restaurant) was very pleased with these two stars. This was really good. There are about 500 star rated restaurants in France with two star restaurants being rare.  Gaining two stars was a goal of mine and I am glad that I was able achieve that goal.  I was told that I “give people courage being the only Japanese in the boondocks”.

There has been a change and it is now done under the Oscar method. Please tell me a story about the award ceremony.

Mr. Hamano:
Three star winners have press releases so the winners have already been posted in the media from the early morning.
As a single star winner enters the hall, he or she is taken to another place, handed a cooks uniform and there is a photo shoot.
Only two-star winners were not notified, and stars were not handed over to everyone who received the invitation letter.  It was something we found out upon our arrival.
I arrived just before the award ceremony due to trouble of the subway in Paris so we could not find the place to sit and ended up sitting in the back corner.

An announcement of the two star recipient restaurants began. A map was displayed of the “Rhône-Alpes region, area 71. “A small village” was announced. I thought of the possibilities.  All the chefs of one star restaurant near my location in attendance were excited and I’m sure heard the announcement.  The name was “Saint-Amour-Bellevue”.  And after that my name was announced.  I was in shock and thought “what should I do now”!  It was then that I noticed that I had not prepared a short speech. I was the first person announced so I was a bit lost on what to do (haha)
Because I was sitting in the back, the presenter, the director and the people in the hall were searching for me, saying “where is he?, where is he?”.  Finally they found me. There was no time to prepare for pre-fitting of my cook uniform.  The one I had was the one I had prepared for me when I won the one star. No one really knew the results in advance.

Finally two stars. Do you feel the pressure of stars?

Mr. Hamano:
When I got my first star, the press release came out one week in advance.  I was extremely happy the moment I saw that press release, but I started feeling the pressure.  After winning the star, my customer base also changed.  Up until now, only local people would come but now people from other locations come to eat.

This job is a fight with myself.  Every day I question myself.  It was a pleasant and happy feeling when I got two stars but it was back to normal once I got back.  I immediately thought “what will I do from tomorrow?”.  The struggle was and remains the same.  I think that satisfaction comes from the result of the struggle.
However, the kitchen is now two stars with four people. It is really hard. The work is very detailed. Because of a large renovation that was done four years ago, the kitchen which we were not planning on refurbishing is smaller now.  There are 26 seats in the hall.  I don’t think there is another 2 star restaurant that has such a small employee population when counting servers and kitchen staff.

I was always interested in Paris very much. When I saw it in a magazine and actually went there to eat, I was thinking “I wonder if this kind of dish will be popular, should I do make this?”  But since I came to Saint-Amour-Bellevue village I thought to myself, “there is no need to make something I can eat in Paris here “.
Originality is important. I do not think we need to aim for the kind of food like offered at the restaurant in Paris. It is good that there is no cliché if you are in this area. 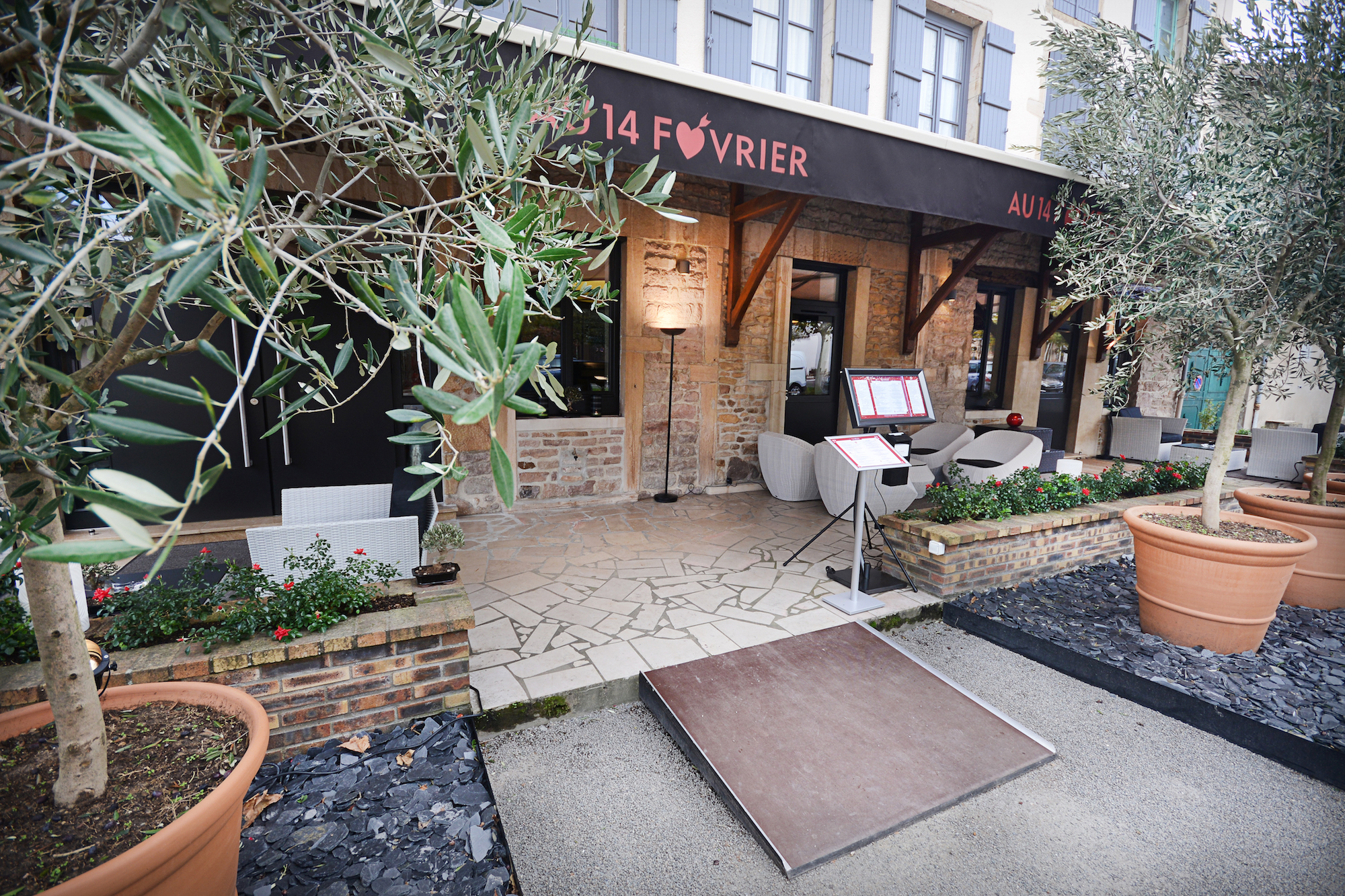