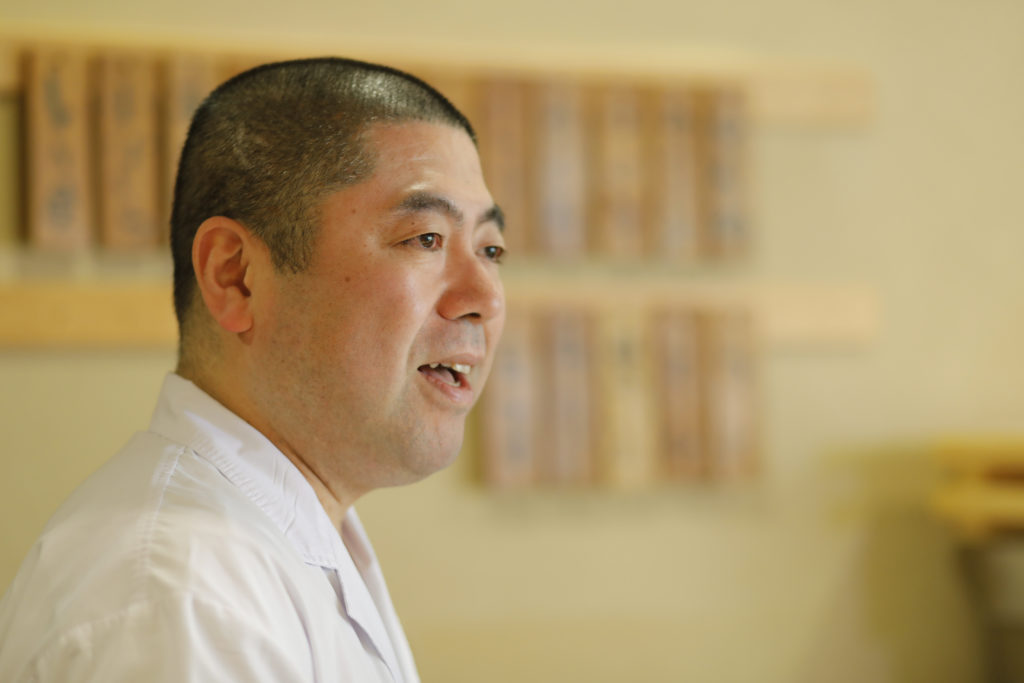 You started your apprenticeship in Shinbashi Tsuruhachi when you were 19.

Mr. Shimizu:
As a genealogy, Shinbashi Tsuruhachi is an orthodox sushi restaurant I think. You can look back its history from Tsuruhachi in Kanda Jinbocho, Miyakozushi in Asakusayanagibashi, and Miyakozushi in Asakusabentenyama. Shinbashi Tsuruhachi where I did my apprenticeship is still located in the same place. It is a very small restaurant. There was only one apprenticeship when I started working there. After I started there, I did everything I could, from cleaning to ordering fish… I developed myself from scratch.

You must have been a very hard-working person when you were doing your apprenticeship.

Mr. Shimizu:
I actively learn new things so my boss took it positively.
As I got responses to my effort, I was able to improve myself without issue.
However, I was too passionate, or so I was often scolded by my boss.
There was a hierarchical relationship but I had a strong passion to be promoted so I tried to be better than the other apprentices who entered the restaurant half a year before me. Therefore, I took action as much as possible.
I had confidence in my actions. We wash rice a day before but when my boss came to the restaurant on his days off, I always told him, “I’ll do it, so please take a rest.” I tried to get more responsibilities there.
The other apprentices were not very active and instead very calm so it was more like a struggle with myself than competing with others.
During my apprenticeship, I always had feelings about whether I was doing all right. I always had a consciousness of whether or not I was able to do good work.

Your parents had a fish shop so it must be an advantage for you as a sushi chef.

Mr. Shimizu:
It was but I myself was a complete amateur. I learned the skills and techniques from scratch after I started my apprenticeship. It is the same as with children of professional baseball players; they cannot necessarily become professional baseball players. However, I was used to working hard so I didn’t have any problem with hard work.

What kind of person was your boss at Shinbashi Tsuruhachi?

Mr. Shimizu:
He was a real connoisseur but was fastidious at the same time. I guess he was not very good at handling people as a business owner. He was not really good at appealing to people like how sushi restaurants nowadays do. People dreamed of fashionable sushi restaurants but the reality was not like that. As he was too strict, there were many apprentices who quit soon after they started.

So there were many quitting, but how were you different from them, considering you continued for about 11 years?

Mr. Shimizu:
I think those who quit soon after they start don’t have a strong desire for their dreams. There were some apprentice at my restaurant who quit soon. I always ask them, “Do you think you are betraying yourself?” When they start, they must be thinking, “I will do it here! I can do it!” However, they try to find excuses to quit amd say, “It was not what I expected.”

Was your apprenticeship at Shinbashi Tsuruhachi hard for you?

Mr. Shimizu:
Well, I was too foolish to realize if it was hard for me!
My father had me work at his fish shop since I was a kid so I never really thought about whether it was hard or not. When I was in elementary school, it was just a normal thing for me to help my parents after coming back from school. I said I was bad when I was in junior high school but my father started forcing me to help him with his fish shop as soon as he knew how I was at school. He didn’t give me any breaks to play with friends and so on. I appreciate it now though. My parents’ fish shop was hectic during the end and the beginning of the year. I finished my second semester at school on December 25th. From that day, I was very busy and needed to be awake all night on the 30th. After I finished working on the 31st and came back home, it was always around the time when the New Year’s Eve TV show “Kohaku Utagassen” was ending.
It was a yearly routine – I flipped back on the bed and slept until morning. I had sashimi deliveries on New Year’s Day. The owner of Shinbashi Tsuruhachi was open until December 30th and restarted the business on January 5th. I thought about giving my employees days off during the year end and the beginning of the year when I started my own sushi restaurant. However, it was strange that I became more passionate at the end and beginning of the year. As it turned up that I opened the restaurant at the end and beginning of the year. 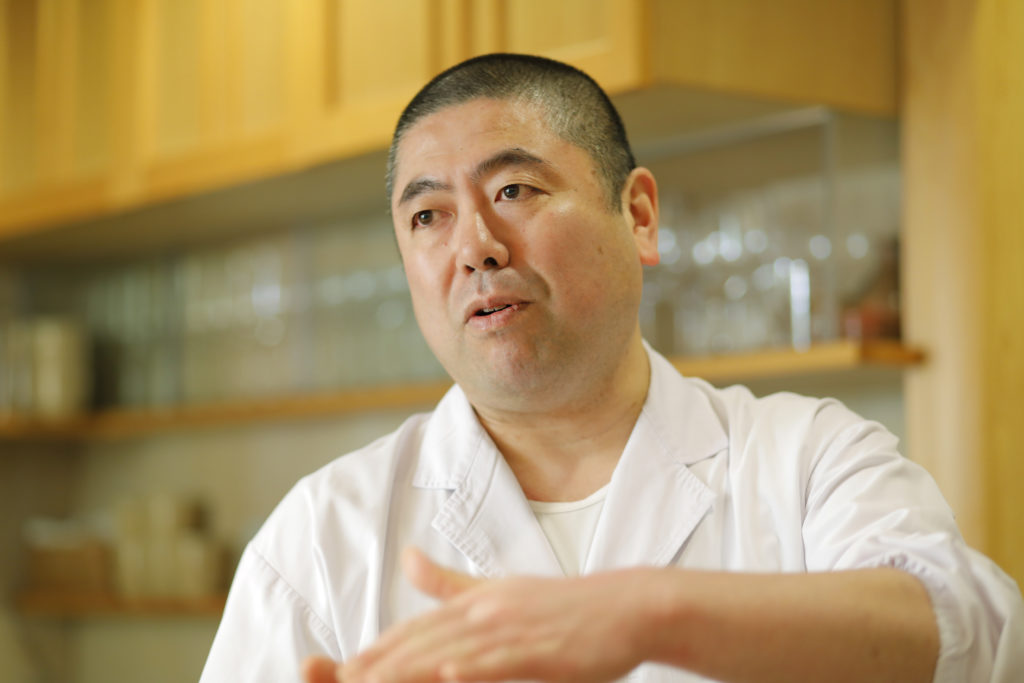 Starting a property search after quitting his apprenticeship and starting his business at the age of 31.

Did you have your dream of having your own restaurant since the time of your apprenticeship?

Mr. Shimizu:
Well, it was. However, the beginning of everything was when I started my own business. It is the same as marriage. It is a start, not a goal.

When did you decide when to start your own business?

Mr. Shimizu:
People say that the early twenties are an important time for chefs. I worked so hard until I was 25. After things got calm, I started my own business when I was 31.
Before I started my own restaurant, there was a succession issue at Tsuruhachi in Kanda Jinbocho. It was when I was 27 or 28. I was asked whether I could be the one who succeeded the restaurant. Eventually it was decided that I was not going to… But my passion towards having my own restaurant didn’t vanish. My friends used to say to me, “How many years have you been a sushi chef?! When are you going to open your own restaurant?!” I always replied, “Well, I am going to soon! ”

How did you prepare for opening your own restaurant?

Mr. Shimizu:
My boss had gone through many tough times and opened his restaurant at the age of 32. I always told him that I would like to open my restaurant earlier than him. I quit Shinbashi Tsuruhachi when I was 31, which was in March 1999. I am not the type who can calculate things well and do two different things at the same time. I can’t take action until I face difficulties. Therefore, I decided to quit before finding a property for my restaurant. After I quit the restaurant, I started looking for a property. I woke up early and went to real estate companies every day.
In any generation, it is not easy to find a good property. In my case, it took many months. Of course I couldn’t live without work so I did physical labor. I even used to read a job information magazine called “Gaten.”

How did you find the property in the end?

Mr. Shimizu:
It was when I accidently went into a small side street to eat after going to a real estate company in Ginza because I was looking for a property near Ueno or Shinbashi. It doesn’t exist anymore but there was a street where there are many small shops in front of Karasumori Shrine. I saw a shop moving out of the place. I was told to inspect any property if I find available ones and see as many as possible to enrich my eyes. Therefore, I talked to the guy who was doing the moving. He told me that the property was going to be pulled down but there was an ochazuke restaurant on the other side of the street that was going to be shut down. I made an appointment to see the owner of the ochazuke restaurant. Things went so smoothly and I was going to buy the property. It was a very small space of only 16.5 square meters, but I didn’t have much money so I just believed that everything would be ok once I put up a shop curtain.

You are such a passionate person! How did you make the money to open the restaurant?

Mr. Shimizu:
When I started my business, the government was very positive about making a loan.
It lasted until the financial crisis of 2007–2008. Therefore, the number of sushi chefs who started their own business increased. In contrast, the previous generation was not positive about having their own shops because it was the generation where the price of property was very high and restaurant owners didn’t want their employees to leave. Young people nowadays are very clever so they tend to look for funds and capital investors or other wise ways to collect money. At that time, I didn’t have enough savings so the only way I was able to come up with the money was to borrow it from the bank. When I tried to borrow money using the government funding program, they told me to submit a business plan. Moreover, I needed to have one-third of the start-up capital to receive a loan of fifteen million yen for even a screening. When I was asked if I had my own savings, I was very upset! I was able to gain help from my boss and my younger brother who was working at the Alaskan Consulate as a chef. Eventually, I was able to gather fifteen million yen.
I realized saving money was very important so I decided to save money after that! I have my employees save money by deducting some amount of money from their salary.

Do you think personal connection is important when opening your own restaurant?

Mr. Shimizu:
My boss at Shibnashi Tsuruhachi was not very active about social things.
In my boss ‘ generation, it was not surprising that people from the same industry didn’t even greet each other even when they met at the market. There was a strict part to it even if they are aware of others. On the other hand, I actively developed relationships with people such as those whom I meet at the market once I started my own restaurant. However, I also think it has a negative aspect, sometimes, when you become too close to people who are in the same industry. 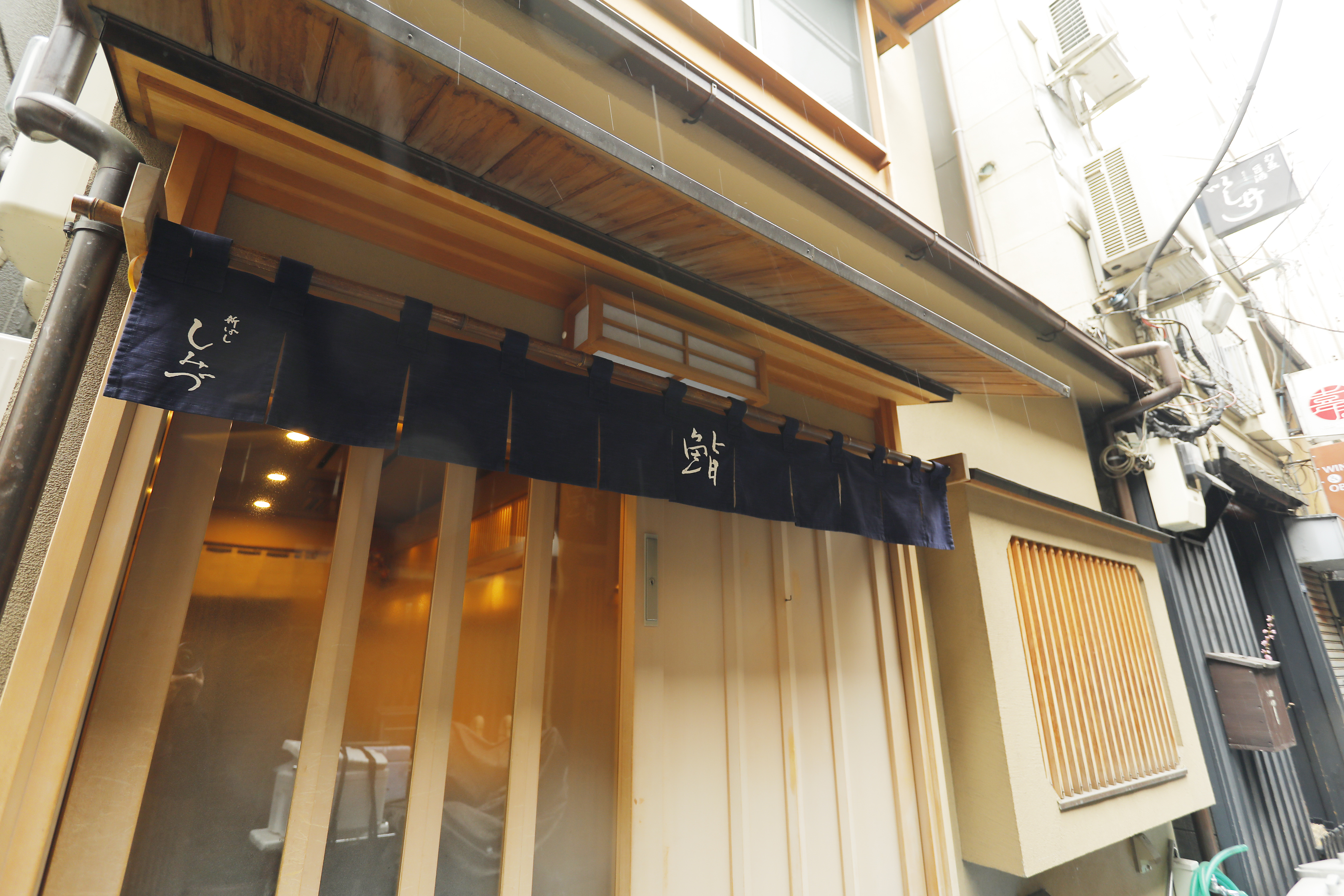