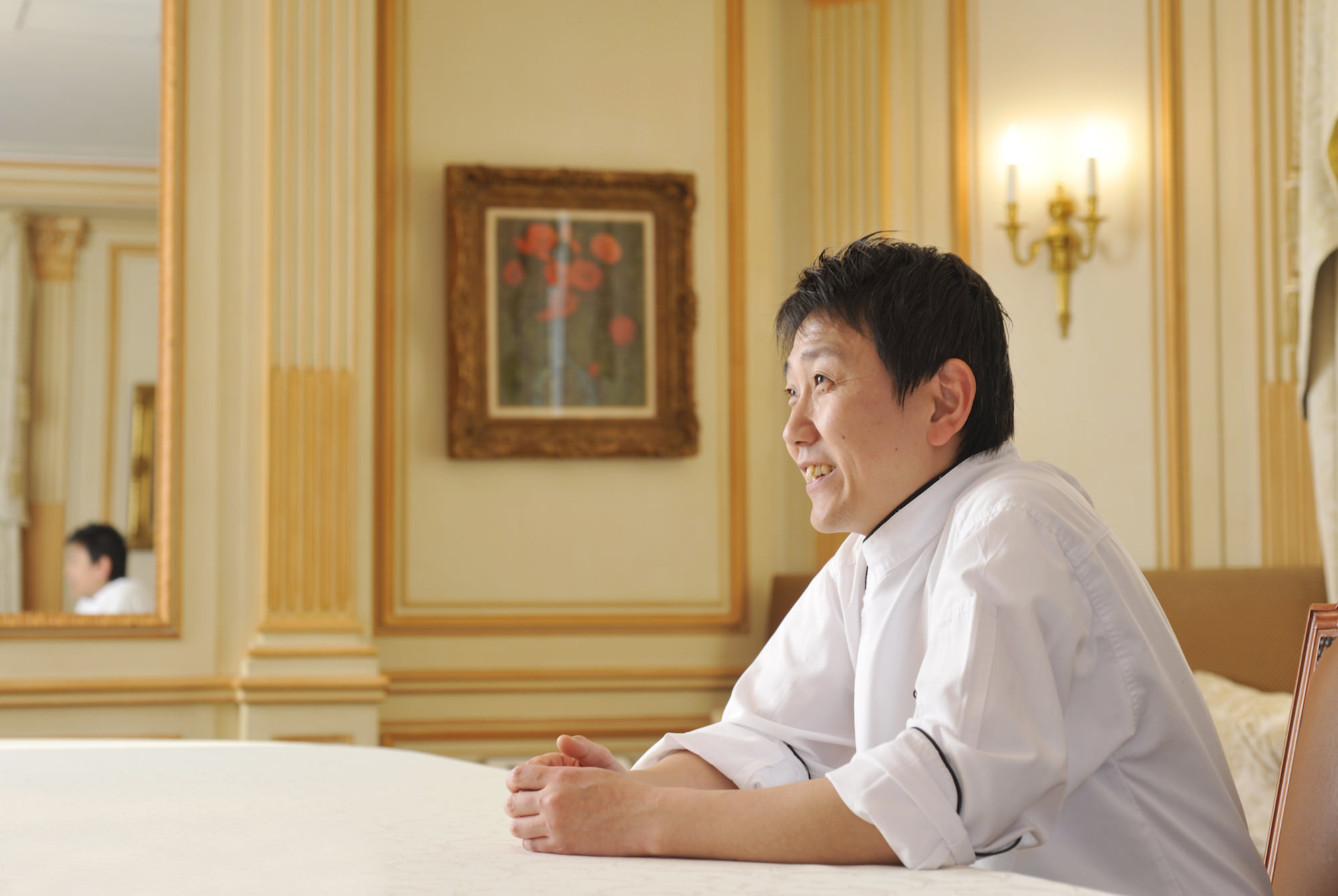 Michiaki Kuga heads the Robuchon Brand Restaurants including Gastronomy Joël Robuchon, the pinnacle of legendary French chef Joël Robuchon’s restaurants, as well as La Boutique de Joël Robuchon, a pâtisserie specializing in bread and pastries. What qualities are demanded of the chef who creates desserts at the world-renowned brand, and how has Kuga honed those skills? 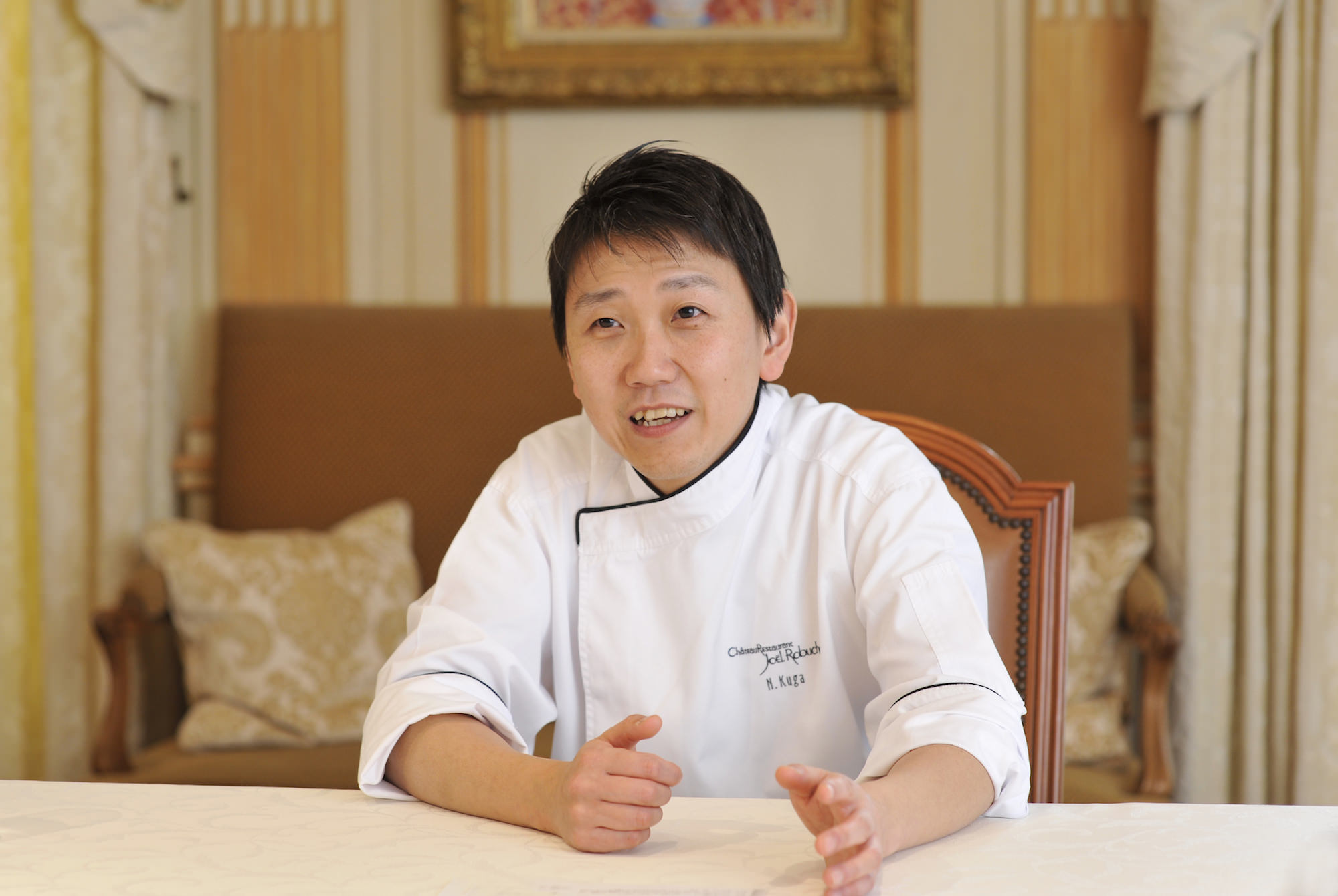 It was more like “I had no choice,” rather than “They let me do anything.”

The Château Restaurant Joël Robuchon is nothing short of a castle, opened in 1994 by Joël Robuchon, a figure said to be one of the world’s top chefs who now more than ever is showered with the critical acclaim of food connoisseurs the world over as he continues to lead the culinary industry. The restaurant features the architectural style of the era of Louis XV of France (18th century), having placed a special order for items including window frames and doors with Bellot Co., a company who works on renovations at the Louvre Museum. It is not just about food — the Château Restaurant Joël Robuchon aspires to be the best of the best even in design and service. Kuga is the pâtissier whose skills are on display at the “Gastronomy” restaurant — the cream of the crop even within that “castle.”

We have heard that you said you wanted to be a pastry maker ever since you were in kindergarten.

Kuga:
I guess I saw my mother making sweets here and there and thought it looked fun. In high school, I used to watch a cooking show called “Ryori Tengoku” that was popular at the time, and I just had a thing for food in general. It wasn’t until my final year of high school that I decided to really get into the world of confectionery when I was thinking about my path moving forward. I had been keen on manufacturing ever since I was a kid, so I thought about becoming an engineer, but I’m not the type to get covered in oil tinkering around with machines. I had a thing for food and I felt like I could keep at it, so I decided on aspiring to become a “culinary” engineer.

Did you consider becoming a chef?

Kuga:
A chef’s world is a tough one, and I thought it would take me 10, 20 years to finally establish myself. I heard from others, however, that you could learn all the skills you need for confectionery in a few years and thought that maybe I could work on all sorts of things while I was young with sweets, At any rate, I wanted to learn the skills right away so I opted to focus my efforts into hands-on training rather than sitting in lectures at a vocational school and studied one year at Ecole Tsuji Tokyo.

My first job was at NASPA New Otani in Niigata. How was it working there?

Was the training rigorous?

Kuga:
It wasn’t easy, but to be honest with you, I haven’t experienced going through the menial task of peeling grapefruits day-in day-out or anything like that. That being said, of the four pâtissiers, three joined the company at the same time and we only had the chef as our boss. The fact that we were short on people was presumably a big factor. Obviously, I did do some menial work, but the chef started teaching me techniques right away and in a year or two I was able to do everything.

So they let you do everything.

Kuga:
It was more like: “Just do anything!” (laughs). I had no choice but to do everything. During the offseason, I had opportunities to help out at Tokyo New Otani and it was a learning experience to see things on a different scale and with a different clientèle. The other pâtissiers would go in turns to Tokyo, so at times I would be left behind all alone at NASPA New Otani and do the work of the Confectionery Division alone. Having been able to experience the whole range of work early on really paid off later. 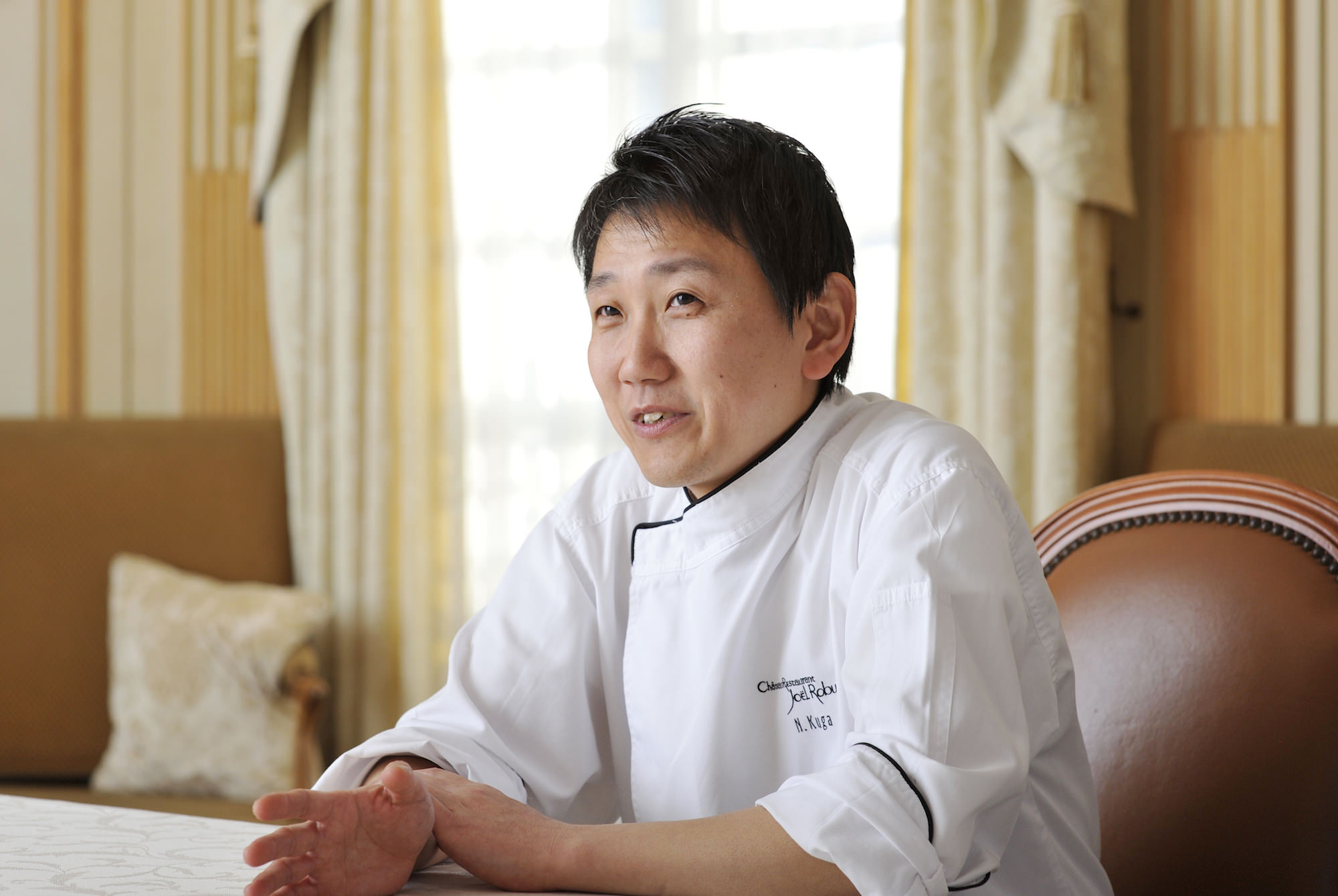 Kuga claims that he wanted to buckle down at one restaurant for about three years for training. After working for about four years at NASPA New Otani, he headed up dining and confectionery at a café in Tokyo for around three years. In an aim to build professional experience in the world of confectionery again, he joined Pierre Hermé Salon de The Ikspiari (located in Maihama, Chiba, and closed in 2012) as a pâtissier.

So you found a position at a confectionery shop as you had aspired to.

Kuga:
Yes. After doing desserts at a restaurant, I wanted the experience of making sweets at a confectionery shop and to see how I stacked up at the shop of a world-renowned pâtissier. I felt like if the skills I had picked up could cut it at Pierre Hermé, then I would probably be fine moving forward.

What was it like actually working at Pierre Hermé?

Kuga:
At the time, it had only been a few years since Pierre Hermé’s first venture into Japan. There weren’t many people on the staff who had experience as pâtissiers.

So you were once again left with no choice but to do it all.

Kuga:
That’s right. Looking back on it now, I was really lucky. At the time, Issei Narita was working as a chef at the Pierre Hermé in Maihama. He later served as a Chef-Pâtissier at Robuchon’s Tokyo, New York, and Taiwan locations and is now an active pâtissier at Esquisse in Ginza. I don’t know if it was because he thought he had to train me first due to the circumstances, but he really looked out for me. Generally, a pâtissier who just started probably would not be able to get involved with the recettes from France, but he showed them to me and I was like, “So these are the famous Hermé recettes” (laughs).

*Recette — A recipe for sweets

This is a silly question, but are the recettes in French?

Kuga:
At the time I couldn’t understand a lick of French so I was looking the words up in a dictionary as I read. There were a lot of sweets that used ingredients that are unavailable in Japan too, so it was all new to me. I never trained in France, but I got to study the French needed for the recettes and learn about French ingredients while I was at Pierre Hermé.

Following Pierre Hermé, you went to Restaurant Tateru Yoshino (Ginza, Tokyo). You also served as a Chef-Pâtissier at Tateru Yoshino and then joined Robuchon in 2004, is that right?

Kuga:
I’m essentially a confectionery shop-minded person, but I just happened to end up only at restaurants after following the lead of Narita ever since Pierre Hermé. Although thanks to that, I’ve been able to build experience with restaurant desserts, which I am grateful for. 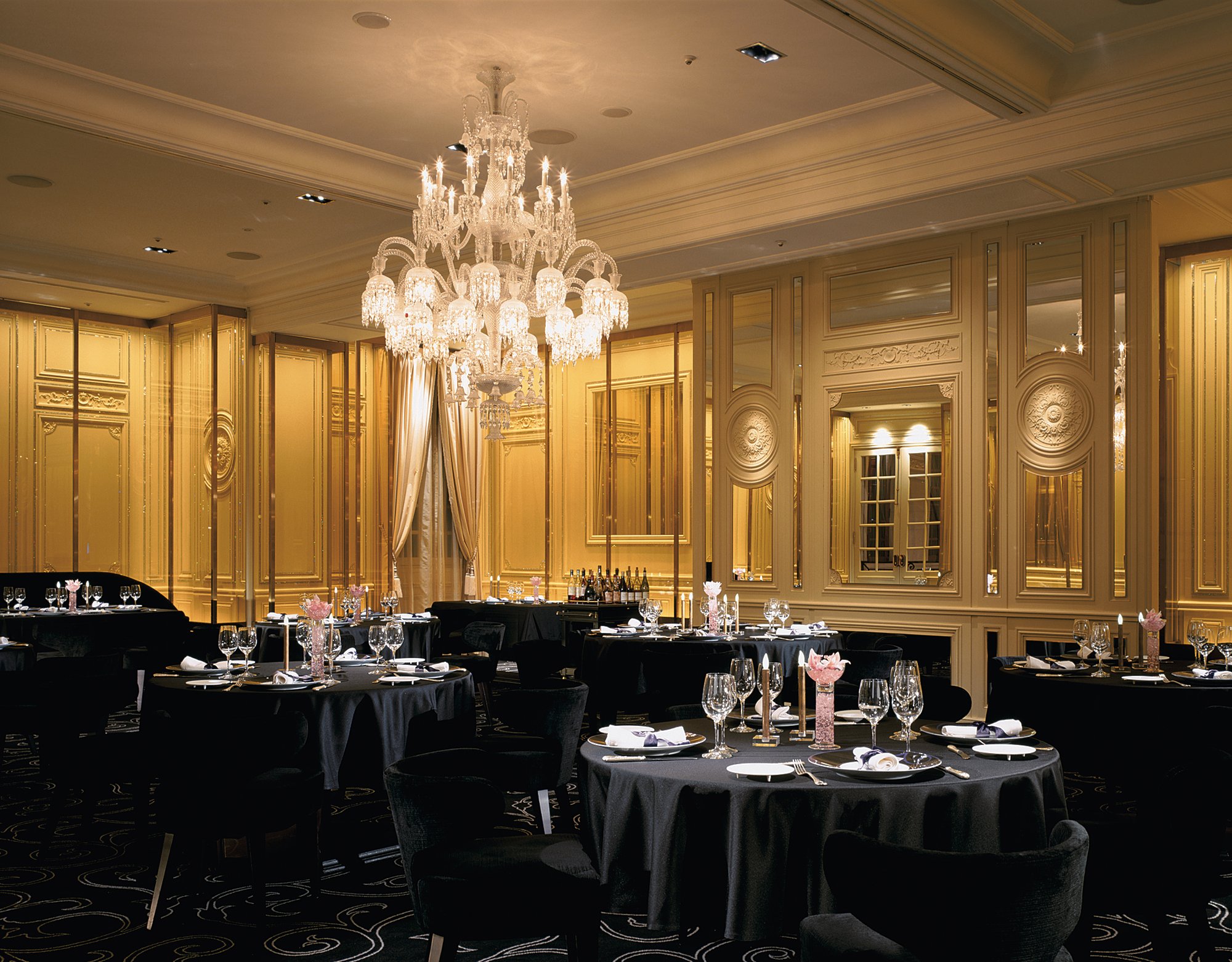