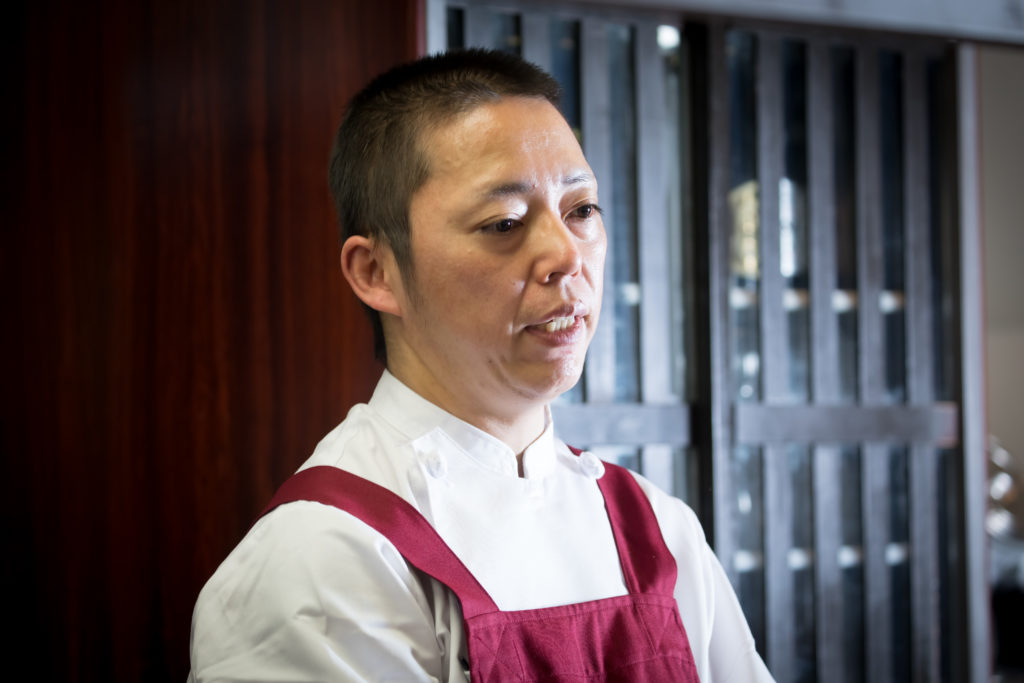 When it comes to owning a restaurant, experience becomes less important than time and concentration

After that you took your interest in having a classically inspired menu and opened up a restaurant of your own. Your restaurant is now widely known as the type of place that’s practically impossible to book a table at. What did it take to rise to that level of success?

Mr. Inoue:
Something that I picked up on during my time in training in Tokyo was that there were plenty of others out there at the very same level as me. The time that it takes to get good enough to open up a restaurant of your own can be long or short, and it doesn’t really matter how many years you’ve spent training. What’s actually important is considering how much of your own life you’re willing to invest to become successful with food. That has a great effect on the state of your restaurant.

In other words you have to look at how much time you’re willing to stake in life in order to learn and progress forward?

Mr. Inoue:
Concentration is crucial as well. If you go into your restaurant every day and mindlessly do your work then you’re going to miss out on achieving any sense of progression. You have to have a goal in mind and put your time into achieving that.

At the time when I was still training I would go in every day and do nothing but the same work at the same kitchen station. This meant that everything I did turned out the same, which held me back in terms of getting better. I didn’t have a set goal in mind for improvement, so my work started to stagnate. 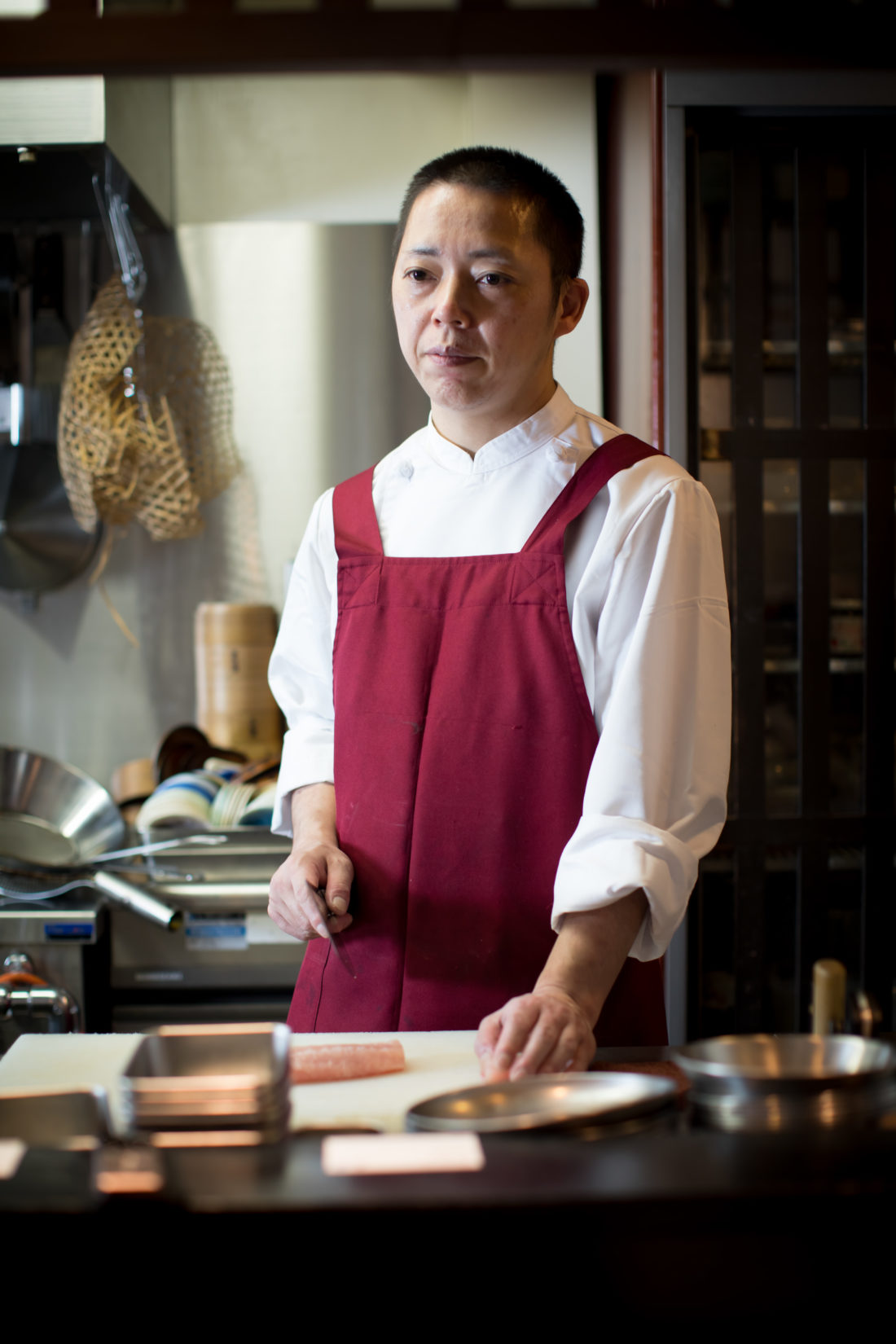 So that goal can even be something like a singular task aimed at elevating your food’s level of flavor?

Mr. Inoue:
When I go to eat at other restaurants there is so much to learn just by looking at their dishware. If you’re not looking to absorb anything, then all you’re going to do is end up eating without getting anything out of it, regardless if you are looking around at the food and dishware. Sometimes younger people don’t know what to do when they’re confronted by questions about food, so they might not even really be thinking about what they just ate, no matter how much time and effort is put into it. It’s hard to grow unless you’re bringing a certain level of awareness to the table and willing to be more perceptive about food.

It doesn’t really mean anything to go out and eat around town, even when you’re young. I mean it’s certainly good to find some motivation after you have an inspiring meal at a notable restaurant. But by the time you try and cook it yourself, you’ll probably have already forgotten everything.

To a certain extent once you have some proficiency in the kitchen you can go out to eat something and then try to make it on your own. It ends up being useful in the end if you go back out to that same restaurant once more to compare what you made. You can look at the differences and see what all you’re missing. This is practical experience that can lead to some real understanding.

It looks like your own skills have benefited from that process of going back and forth.

Mr. Inoue:
Everyone can eat and stuff like that, so what matters is what you can gain by focusing in on things. It’s the same as learning a language. Everyone can watch and listen, but what’s really important is writing and talking. You can watch and listen passively, like while you’re watching TV or something. But it’s hard to write and talk without thinking about it. With some perceptiveness you can decide between what’s wasteful and what’s an effective use of your time.

This even applies to things like knifework. If all you do is chop things up without thinking about it then you’re never going to progress forward no matter how long you work at it. Nothing will ever change if you don’t challenge yourself and think about what you’re doing wrong at any given moment. You can also do things like watch other people’s techniques or try new cutting methods. I’ve even seen chefs in their 60s who are terrible with their knifework. Even if you have 40 plus years of experience behind you, there are no guarantees that your skills will follow along with you.

Which means that the amount of experience you have is not necessarily what’s important, right?

Mr. Inoue:
I think that curiosity can take you further than ambition. It’s useless if you’re not curious or interested in the work itself. When we’re looking for new hires we try to just look for people who like food and cooking, rather than focus on whether or not candidates are skilled. You know right away when you watch how someone cooks. When people don’t actually like food they don’t apply themselves in the kitchen, even if they know how to make good food. This ends up creating a kind of attitude where all they want to do is rush through and get to the end of the day as soon as possible.

That probably rings true for people across all professions. 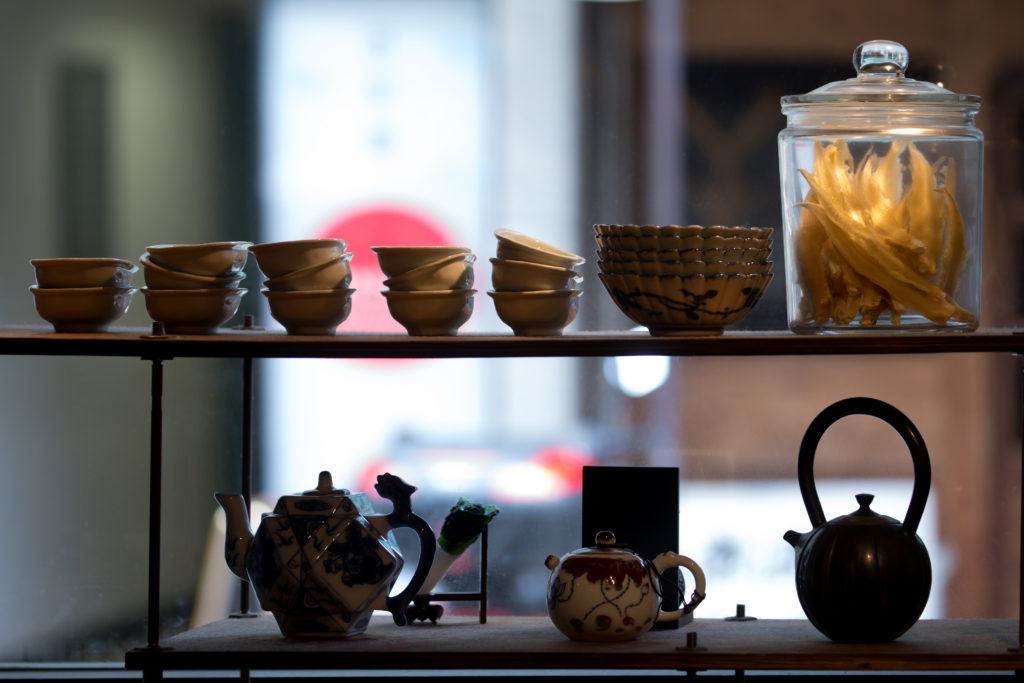 Winning favor with customers right after opening, and being particular about the appearance outside

Apparently there was an endless stream of customers practically right after you opened up. Was that how you planned things would go?

Mr. Inoue:
When it comes to attracting new customers we had a particularly disheartening experience on the first Saturday we were ever open. There was a huge rainstorm that day and we only had about 2 groups (4 people) come in. But, other than that I don’t remember having any down time.

Even well-regarded restaurants usually face some difficulties early on. With that in mind, what do you think was behind Hinotori’s eventual success with customers?

Mr. Inoue:
I think giving people what they wanted had something to do with. Maybe offering things that attracted interest as well. I think the worst thing you can do as a chef is open a restaurant and then let pride get in the way by being stubborn about your menu.

This may be a bit surprising but early on what I cared about the most was how the restaurant looked on the outside. After I came back from Tokyo I went to help out an older colleague of mine at a restaurant in Kyoto, and while I was doing that I spent time looking at properties. I took hundreds of photos of restaurant exteriors in Gion and I picked up books on noren curtain signs. I would take a different way home every day to see new places and take notes on restaurants that didn’t look appealing from the outside.

I looked at restaurants with eye-catching glass facades and checked if the people inside looked like they were enjoying themselves. I paid attention to what kind of restaurants caught my eye and then I examined what made these sorts of places attractive to me.

Based on that approach I made it so you can see our tea utensils from the outside, and I worked on other stuff that made sure our restaurant looked like the kind of place that served Chinese food. I dove deep into the whole design process.

How about the menu? It looks like you had an idea for the kind of style you wanted to go for, but you also had the insight to not just make food that you liked. How did you reach that kind of compromise?

Mr. Inoue:
At first the menu was also to a certain extent based on what I thought people would enjoy. For example, stuff like mapo tofu isn’t on the menu these days, and I won’t make it even if someone asks. But, back then I put it on the menu.

That being said, it’s a problem to have things on a menu just because it comes up a lot. That becomes a situation where you’re trying to ensure orders and you end up making things half heartedly. For instance it’s a terrible pattern if you start thinking things like, “I don’t want to do mapo tofu since we do Cantonese food, but it’s always coming up so I don’t have any choice but to have it ready anyway.”

If a dish bothers you then cut it out completely, and if you’re going to put something on the menu then do it with complete devotion. You have to pick one or the other. In my case I thought everything through to decide what goes on the menu, which was what happened for stuff like mapo tofu, ebi chili, and sweet-and-sour pork. Before we opened I tested everything to see if it would work and then I added in arrangements while also holding onto some of those Beijing style nuances. The ebi chili and sweet-and-sour pork are extremely popular to this day. 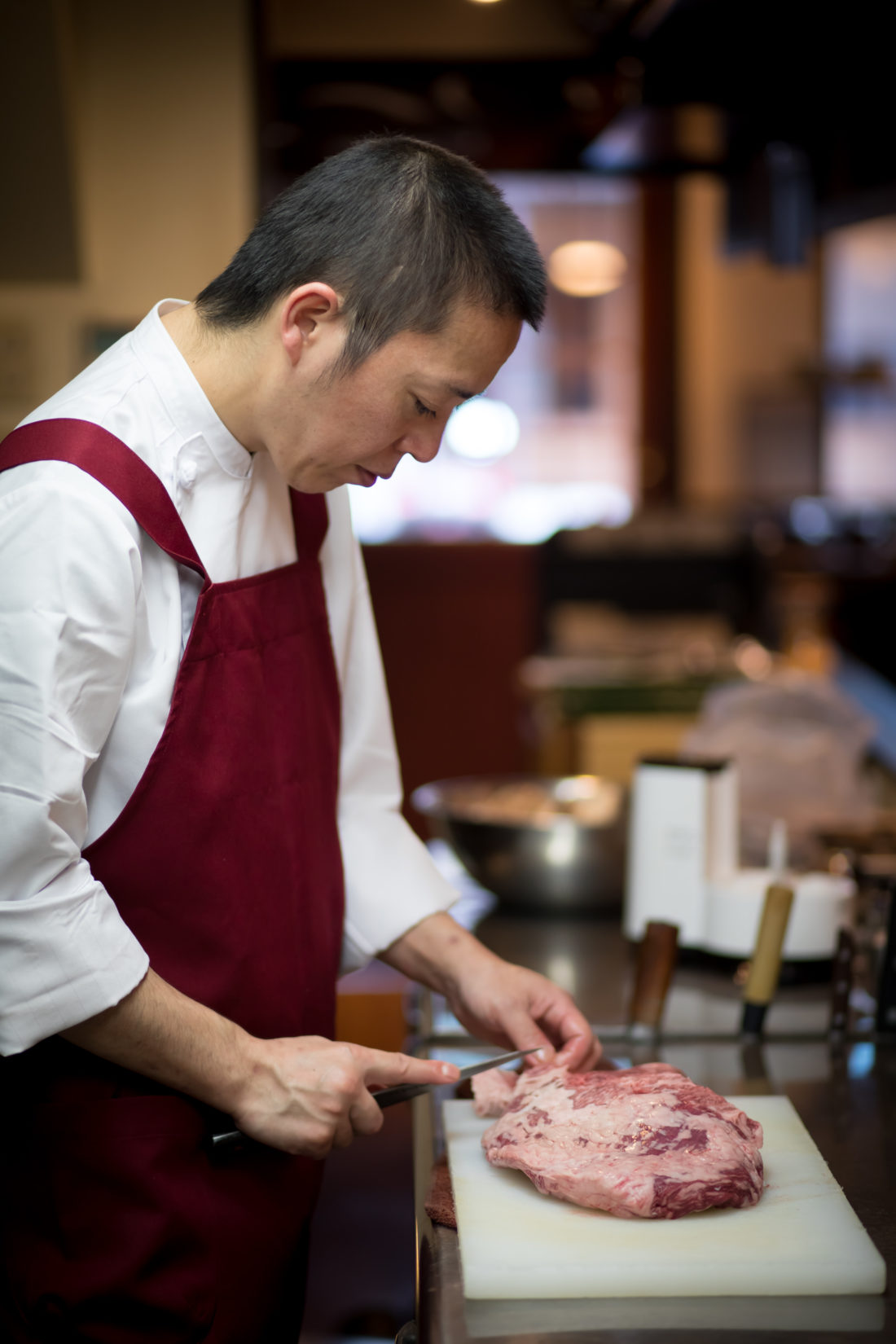 It seems like the benefits of thoroughly looking at what’s in demand is paying off now. Are there any chefs in particular that got your attention in that respect?

Mr. Inoue:
That would be Chef Minami over at the restaurant “Iwansui.” I was going there back and forth before I left for Tokyo. It’s by far my favorite restaurant. I respect his food and the way he approaches things.

It sounds weird to say it but the menu there has a persistence to it. Ever since I started going there the restaurant has continued to push out a menu that doesn’t solely exist to win the hearts of every customer. An example of this was back when they had ebi chili on the menu and it was incredibly popular. It was the type of thing where as long as they had that on the menu they could use it to stay safe and guarantee success. But instead they completely switched up their menu every month for griddle-cooked food like that.

His restaurant could have taken the safe road to find success, but instead he decided to show persistence in finding something more challenging. I really respect that kind of approach.

Mr. Inoue:
I think that no matter what you’ll end up playing defensively. New customers can come in and enjoy a classic menu, but regulars won’t agree with it. Changing your menu is an immense undertaking but I think it’s crucial if you want your restaurant to find continued success with customers. 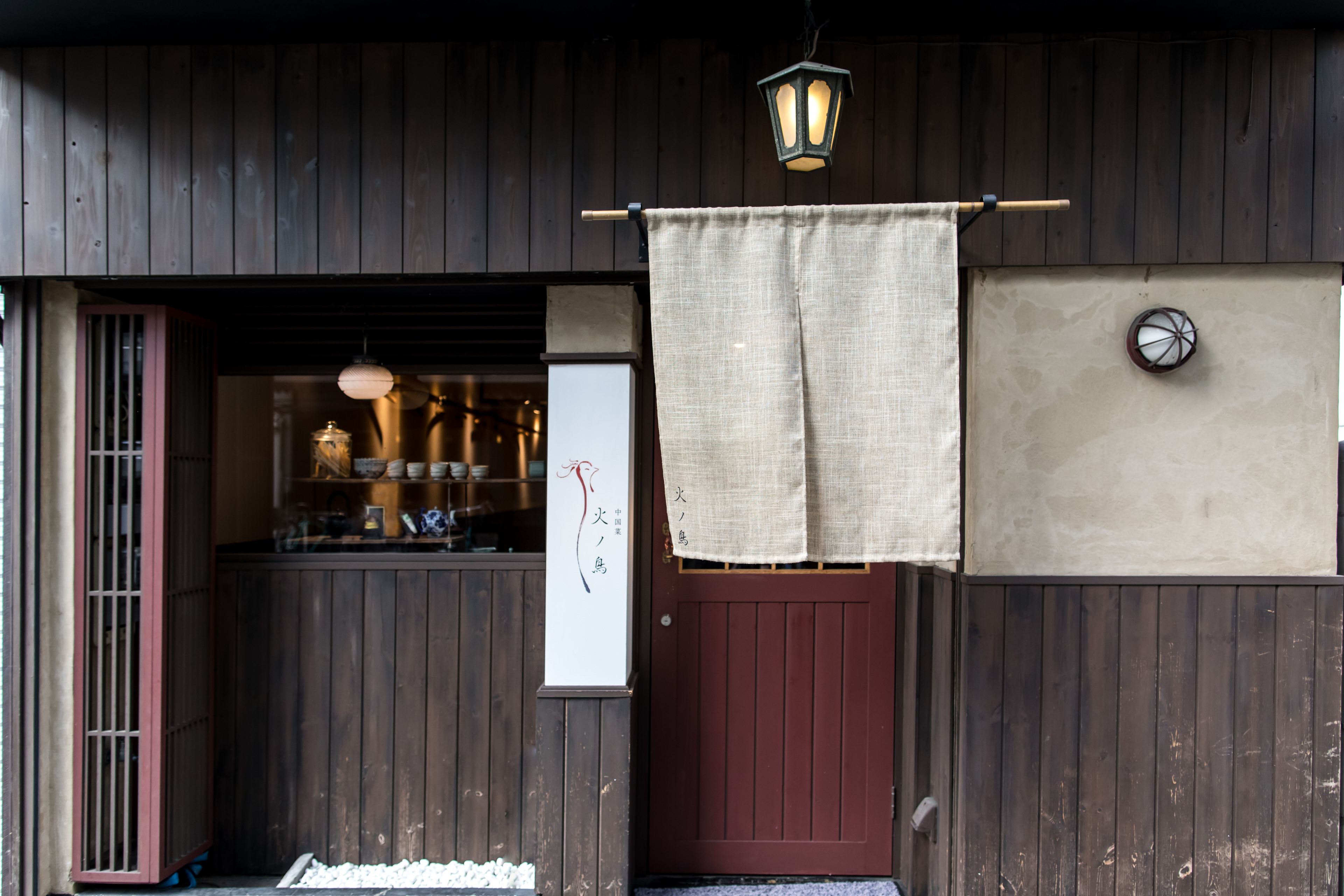