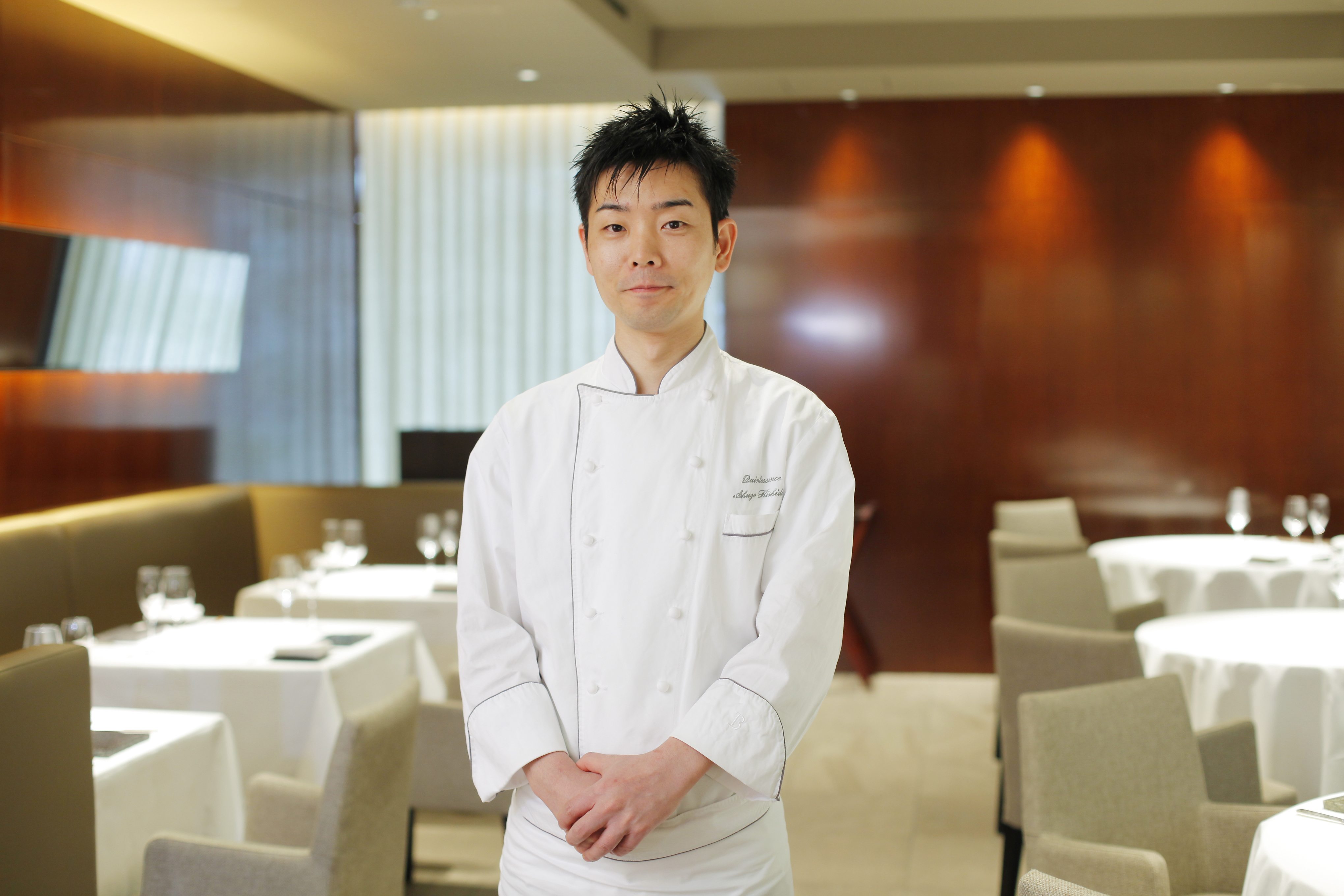 One year after the opening of his French restaurant Quintessence —at only 33 years old— Shuzo Kishida is awarded three Michelin stars, becoming a highly-acclaimed and the youngest holder of three Michelin stars (as of 2007). Nine years have passed since then. Kishida's cuisine continues to enchant many people from all nationalities, as Quintessence shines on every year as a three Michelin-starred restaurant. Given his youth and blooming talent, as well as his unrelenting outstanding performance, what is Kishida like as a person? 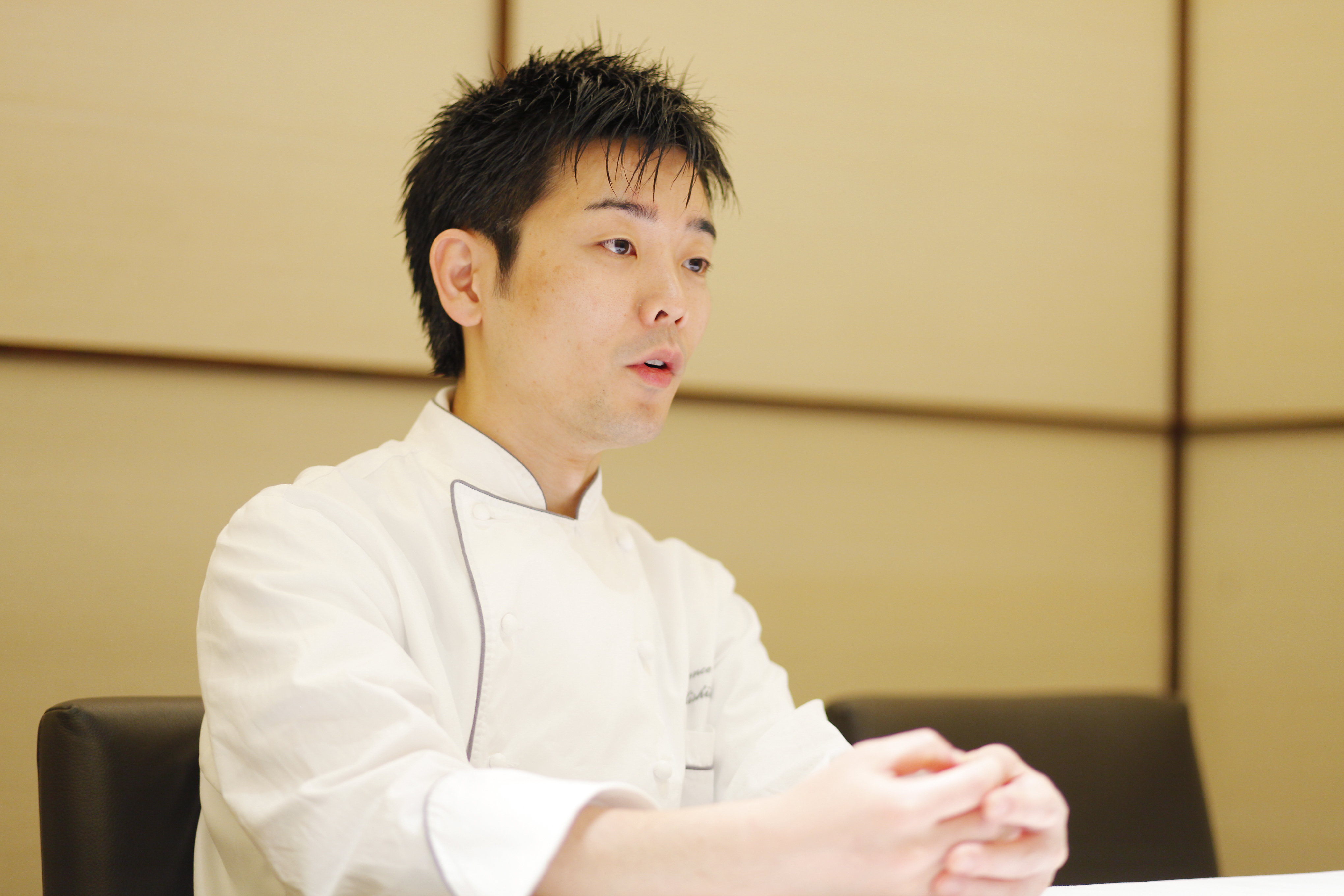 If you are simply quiet and polite, you will just end up doing odd jobs.

Kishida’s mother used to work to support the family, so he helped her out with the cooking. His passion originated from the experience that his family praised his cooking skills.

When he graduated from primary school, he wrote that he wanted to become a chef. After graduating from the Nagoya Professional Cookery School at the age of 19, he worked at La Mer, located at the Shima Kanko Hotel in Mie Prefecture as a first career. The executive chef at the time, Takahashi Tadayuki, had been a source of admiration since his childhood.

How did you first get to know about Chef Takahashi Tadayuki?

Kishida:
When I was in middle high school, my mother borrowed a book from the library, and I read a conversation that had taken place between Chef Takahashi Tadayuki and the 11th Executive Chef of the Imperial Hotel, Nobuo Murakami. The topic of the book was “What is a chef?” and what left the biggest impression on me was Chef Takahashi. I found out that he had become a chef at the young age of 29, helping La Mer grow into a world-renowned restaurant by pursuing the use of local ingredients in his dishes. I thought that was amazing. We then went to visit Shima during a family holiday, and we actually went to try out French food at La Mer. Unsurprisingly, it was…

Kishida:
The dishes had some delicious flavors that I had never tasted before. I was also able to meet Chef Takahashi, and although we did not exchange any words, I felt completely in awe of his presence. It was then that I made the decision that I would work there someday.

You worked part-time at La Mer for one month during a summer vacation while you are studying at the cookery school. What were your most memorable impressions during that experience?

Kishida:
Part-time workers at the restaurant came from all over the country, and everyone’s high mindset to work gave me great motivation. The majority of my tasks were consisted of odd jobs, such as washing dishes and cleaning, but one day we were given the opportunity to cut and clean a fish. For us, it was a chance to touch some ingredients. We all started to fight for the fish and were scolded with a “Why are you all fighting?!” This was the hungry spirit we all shared for such an opportunity.

So from your student days, you had the attitude of getting your own work for yourself…

Kishida:
The world of chefs is very competitive. During my part-time work days, I could tell that I could not just sit there with my mouth opened, waiting for mother bird to come to feed me. If all I did was working quietly and politely, I would only end up doing odd jobs. All I would be left with would be a feeling of boredom. Technical skills are achieved by learning them, and once learned, nobody can take them away from you. In order to learn that much, you need to be proactive and grab greedily at every opportunity. I was already conscious of this by the time I had started working at La Mer. 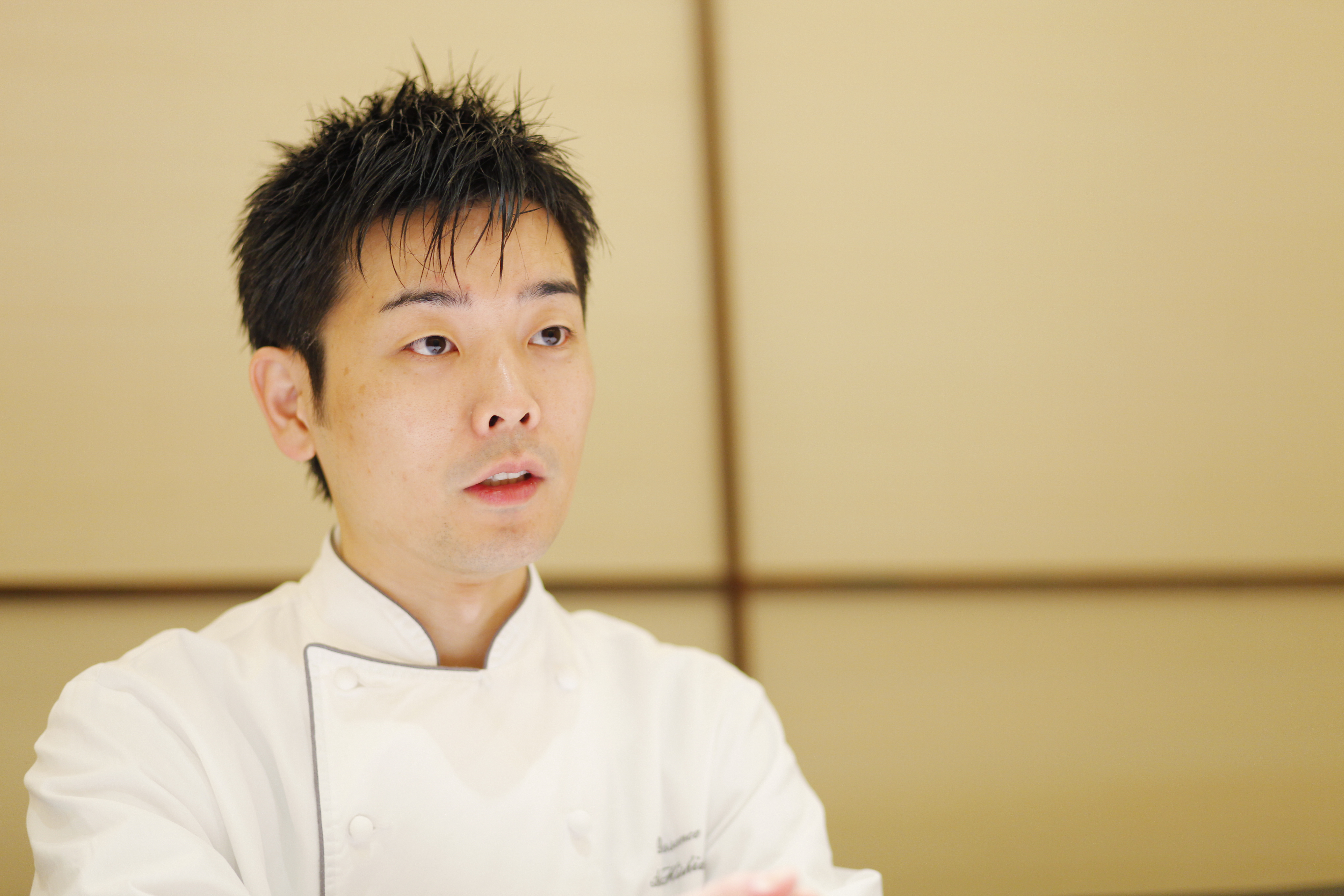 What should people do to become a chef at the age of 30?

At La Mer, Kishida was able to learn French cooking characterized by strong regional tones and a strong respect for ingredients from the local region and the Eastern Sea region. However, there was also a tendency to favor certain ingredients, and he felt impatient about the lack of increase in his range of cooking techniques. He then felt the need to go to Tokyo. On his days off, he would roam around and eat at various restaurants in the city until he found the one where he wanted to work: KM in Ebisu.

Why did you want to work at KM?

Kishida:
This was the time when everyone talked a lot about chefs that prepared creative dishes. However, the dishes prepared by KM’s chef, Kiyoshi Miyashiro, paid careful attention to the fundamentals of cooking, almost as if they had been taken straight out of a text book. Up until then, during my four years at La Mer, I had only experienced Chef Takahashi’s strongly colorful cooking, so I felt that this restaurant would allow me to learn what I lacked and needed to learn. And also, above all, the food was just delicious. The restaurant served classical dishes that anybody who has learned a bit of French cooking could guess how they were made —and in actual fact, there are many restaurants that serve similar menus— but in spite of this, Chef Miyashiro’s cooking was outstandingly delicious, and I wanted to find out why.

When I first asked to be allowed to work with them, I was rejected saying that they had no vacancies. However, I am the sort of optimist that thinks “Well, they will hire me as soon as they have a vacancy.” Without giving up, I clung onto my hope and after one day I phoned from Shima to inquire about available vacancies. I was then told that they might have a vacancy if I waited a few months, and so I started working with them two months later.

That’s amazing. If rejected, maybe most people would decide to work somewhere else, wouldn’t they?

Kishida:
Many would probably do that. However, I believe that choosing your place of work carefully is extremely important as it has the potential to completely change your future. In this industry, every workplace is busy and every chef is strict. Everybody goes through hard times. If people end up working in a restaurant that does not particularly grab their hearts, feeling that they should stay perhaps simply because the restaurant is famous, then they would blame their misfortunes on the working environment. They would then end up fleeing to another restaurant in the hope that they would be better accepted there. However, if you choose a restaurant that makes you feel, “I absolutely have to work here,” and “I must never leave this place,” then your endurance becomes stronger. This is why I pay careful attention when choosing the restaurants where I want to work.

At the time, what were your future objectives?

Your awareness of your own objectives is extremely sharp, isn’t it?

Kishida:
People cannot exert their best efforts without having objectives. The more concrete the objectives, the better. Also, having only big objectives can have the tendency to cause the days simply to fly by. Big objectives and small objectives need to be combined together, to create a large number of objectives —the equivalent of taking short holes in golf. I believe this is the shortest way to becoming what you want to be. 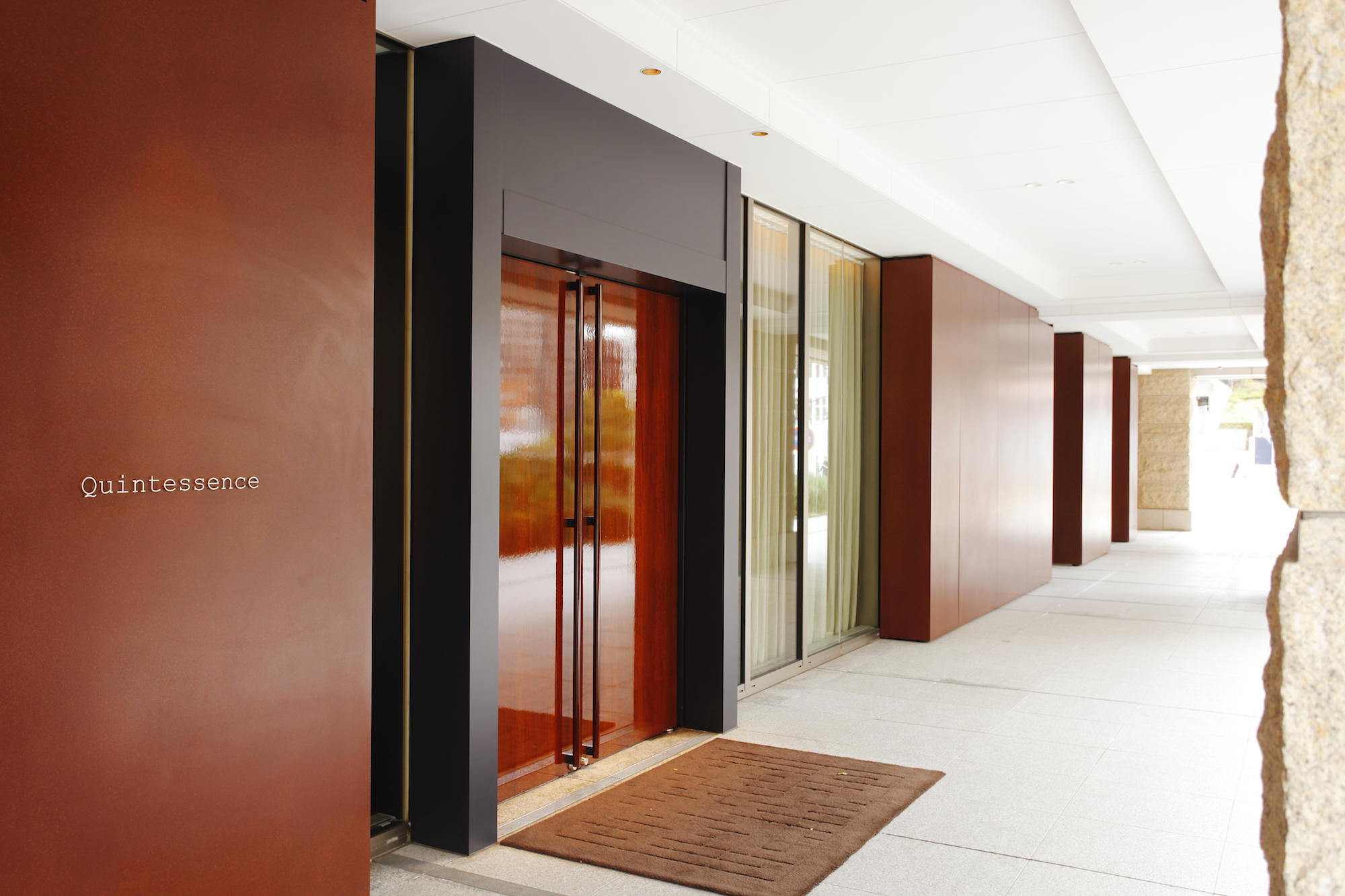