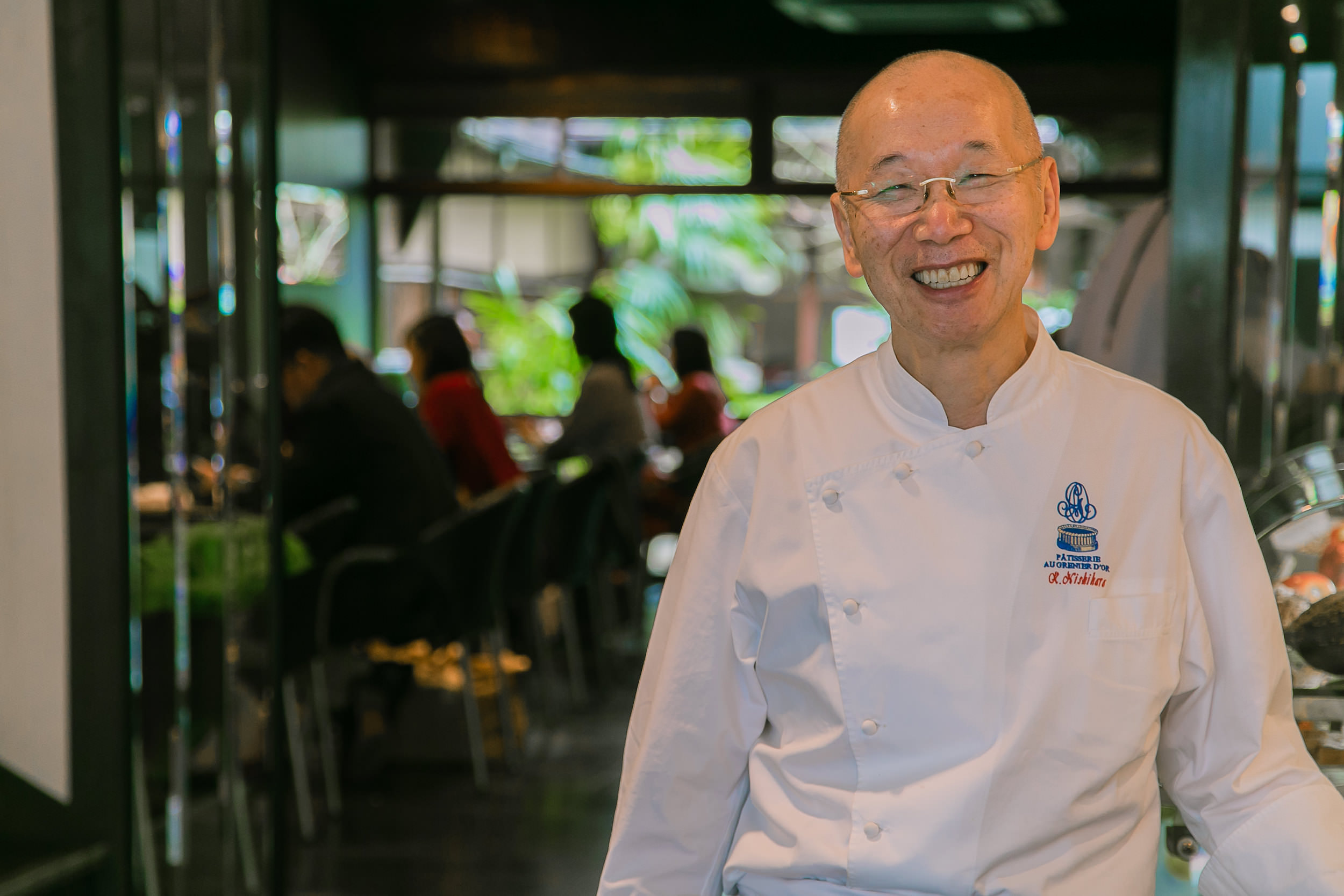 In Karasuma, Kyoto, the store is located a bit away from the noise of Nishiki Market.
One of the greatest patisserie in Kyoto, Patisserie au Grenier D'or is led by owner-chef Mr. Kinzo Nishihara, who worked as chef patissier at the main branch of Alain Chapel and as chief of confectionery at a Shiseido parlor called L'Osier.
Some news has been made about this shop closing in May of 2018.
I took the chance to hear from Mr. Nishihara, 64 years old, about the reason why he will close the shop and his past and future as a patissier. 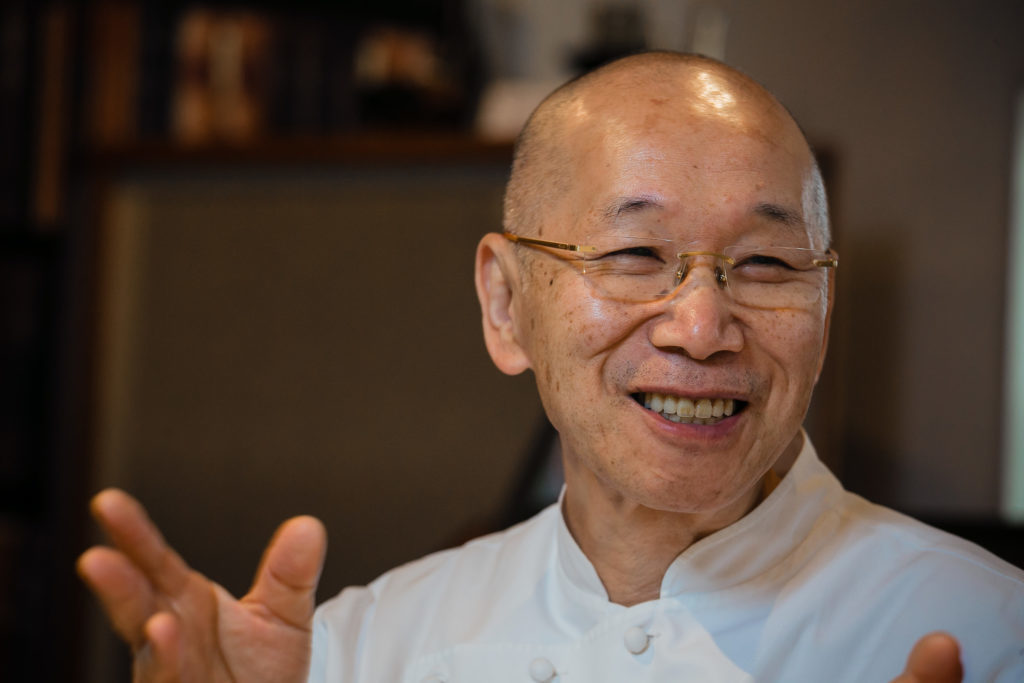 A childhood with unlimited love and strict manners.

Mr. Nishihara:
I grew up in a small castle town with mountains and streams all around the place in Okayama. My parents were farmers with side jobs, so I was surrounded by my grandparents and three older sisters, so I was raised spoiled.
But my grandfather was a teacher of kendo, so it was a family which was very harsh in discipline and manners. When I went in front of my father, it was always when I got scolded, and I was made to sit straight on the door sill while being scolded, and it was really painful.
I was a naughty one and stole watermelons from our neighbor’s field.
I was caught quick and got beat up. I was scolded all the time.

There was that kind of strict discipline, but I think I spent the days of my childhood freely without any complaint or restriction.

But when I reflect back now, I started to focus on myself when I was in 4th or 5th grade.
It was something like I wanted to be cool, or follow what my parents told me.
I think that kind of ego began to appear.

Are there any words that you remember well?

Mr. Nishihara:
What my mother used to tell me all the time was to greet people properly.
Also “wholeheartedly” was her habitual saying. She told me that so many times, it was like my ears were swollen. When something happened she reminded me: “wholeheartedly.”
But I realize now that it permeated inside of myself and became a part of me.

As I grew older and came out into society, I could gradually feel that what my grandparents and parents taught me strictly but with love had become my foundation.

Please tell me about your experience of being influenced by culinary arts.

Mr. Nishihara:
I think there was dietary education taught when I was little. They were farmers with side jobs so I was given seasonal food collected from field.
Whenever we ate the first crops we brought up the topic of whether the crops were good or bad.
The base of taste, such as how to feel the taste and how to express that, was built then.

And I also learned table manners when I was a child.
I was disciplined with such things as “You should not talk while eating” and “Other family members should not start eating until grandfather sits and starts.” So I wanted him to come soon and even helped him with prayers.
I think I naturally learned, without awareness, how to respect older people. 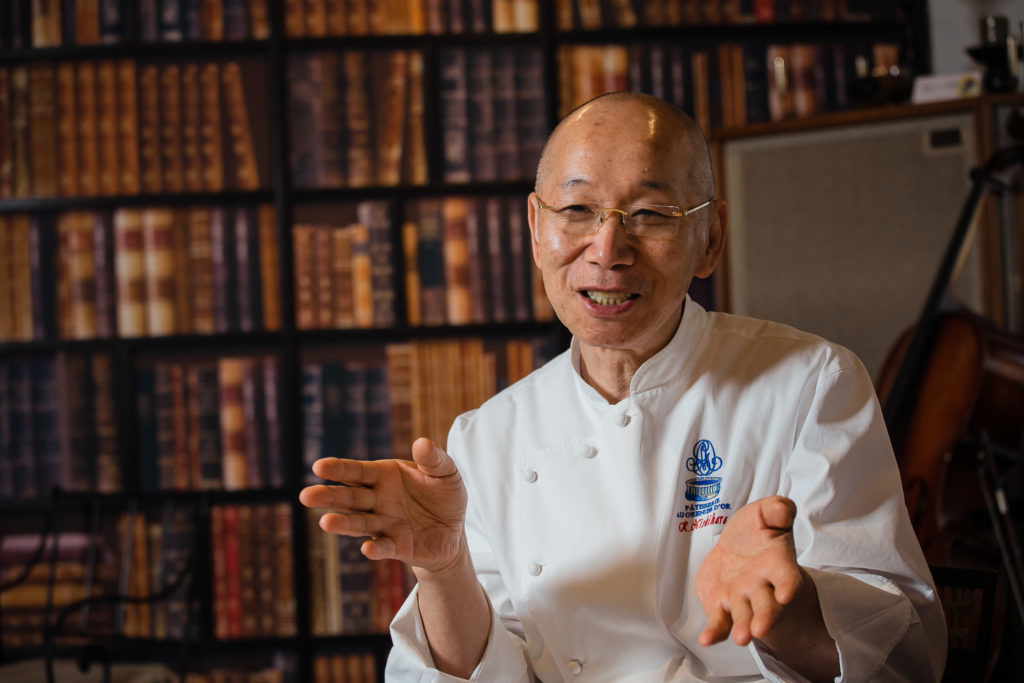 Considerate father who let me move on to the hotel industry.

How did you decide your career path?

Mr. Nishihara:
I was the oldest boy in the countryside, so I did not have a choice in my career.
It was decided to succeed my family business from the time I was born. It was natural in that era.
I was told, “It is all yours, even the ash of the okudo.”

(*1) Okudo: Duct located on the back side of the oven.

Did you not rebel?

Mr. Nishihara:
Not at all. It was quite a natural thing so it was more eager to respond to my parents’ expectations than I wanted to do this and that with my own will.

My friends were the same, so it was not like I hated the idea.

Even if you were like that, what was your chance to join the culinary field?

Mr. Nishihara:
After graduating high school I helped with farming and worked at a company that dug iron ore, where my father worked.

In that company there was a senior who ran a cafe as a side business. I happened to visit there and volunteered and it was fun. And it became my chance of entering this field.

Since I grew up in a big family in the countryside I liked communicating with people, and also I helped my father cooking for events, so I thought I could serve customers well.

So I told my father that I wanted to go to Tokyo, expecting him to say no, but he quickly said, “Yes.” He said that I had been following what my parents said so it is okay to do whatever I wanted to do.

I was raised in a world with a standard of succeeding family business, so it is like a betrayal to the family. So I was surprised that my father allowed me to go and I appreciated it a lot.
I was 21, 22 years old.

And you happened to work at the hotel afterward.

Mr. Nishihara:
Yes. It was okay to leave home, but I was not permitted to go to Tokyo.